The Voices of Confrontation 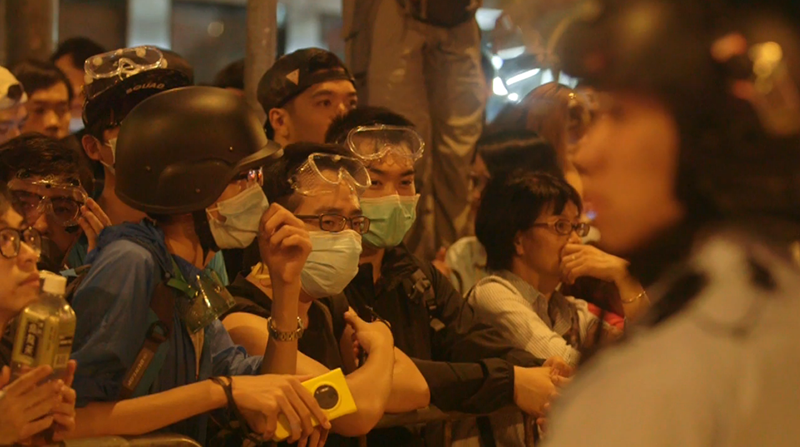 As violence escalated in Mong Kok this past weekend, cameraman Nathan Mauger moved smoothly between baton swinging police officers and angry protestors to bring viewers to the middle of the fight for democracy, highlighting the dialogue between the opposing sides as they fought for ground. Mauger’s been in Hong Kong covering the Occupy demonstrations since September 30th, at times filming for CNN and Swiss TV. His latest video, 20 Meters at Mong Kok (WARNING: GRAPHIC LANGUAGE), began touring social media shortly after he posted it to Vimeo earlier today. Unlike most raw video or voiceover news reports, Mauger focused on the dialogue between the police and the demonstrators, raising the shouts, curses, and accusations above the physical confrontations. https://vimeo.com/109413775   20 Meters at Mong Kok from Nathan Mauger on Vimeo. ”It's fascinating hearing what the two sides say to each other in the middle of the chaos, and what they say among themselves,” Mauger, says. Like battlefield leaders, each side shouts commands to their groups, at times coordinating small retreats after a skirmish or the need to hold their ground. In one tense confrontation, a demonstrator raises his arms and complies with a police officer’s command to move back. The officer protects himself with a shield against any potential attack from the crowd, and pushes the demonstrator along. The tension is momentarily diffused when the men see the camera, the officer drops his hand, and the demonstrator proclaims: “We are all Hong Kong citizens.” While the video features the familiar pop, pop, pop of batons hitting open umbrellas, Mauger records encounters that are unusual in media reports. In one scene, along Argyle Street, just across the road from the police and protestor front lines, an officer works to calm an agitator. “Drink some water and calm down. And then let’s get out of the road.” The conversation, like each shouted phrase in the video, is in Cantonese. Mauger, currently based in Shanghai, is fluent in Mandarin after living in Mainland China for 14 years and required the aid of a journalism student to translate. The video also features the small details that you will hear journalists frequently recount amongst themselves, from the DIY foam shields the protestors use to protect their forearms from the police batons to the boredom that bookends each confrontation, at times lasting for hours. Since the action has mainly taken place at night over the past few weeks, many journalists, Mauger included, are altering their sleep schedules or forgoing rest to cover the demonstrations. Mauger says shooting until 4am is not unusual, and editing afterwards ensures he will see the sunrise before he gets any chance to rest. Even if running on fumes at times, Mauger understands where his attention needs to be and it isn’t protecting himself. “The main thing is trying to keep everything in focus. Then sequences, then framing, and then how close you can get without getting hit with anything.” View more of Mauger’s work on his Vimeo page. Got anything you'd like Localiiz to share? Send us your stuff!

Singapore’s Love, Bonito is coming to Hong Kong this weekend

How to dine at a Hong Kong cha chaan teng

"Gwai Lous" Rap About Their Love of Hong Kong in Near-Perfect Cantones...