By crystal_wilde 9 August 2013
share:
While most 17-year-olds in Hong Kong are busy preparing to fail their driving tests, one bodged parallel parking manoeuvre at a time, one local school boy has already won his wheels, and is certainly putting them to good use. Meet Matthew Solomon, the Hong Kong teenager in the fast lane to Formula 1 glory. 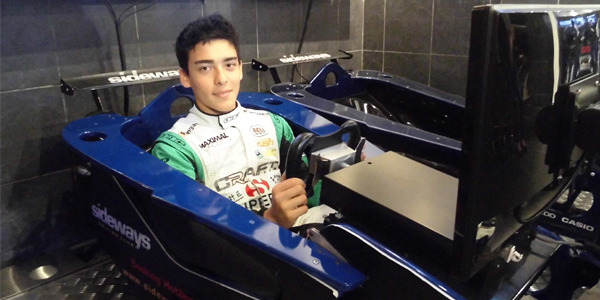 Matt practicing in a racing SIM at Sideways Driving Club in Central At the tender age of 17, Chinese International School student Matthew Solomon has a lot on his plate. Alongside his last year of studies and exams, he’s busy taking the racing world by storm as he graduates from high school go-karting champion to the roar and rumble Formula level competitions. Recently winning a contract with Eurasia Motorsports under the guidance of manager, coach and multiple Formula 3 champ Carlo van Dam, Solomon has been turning heads on the track, prompting those in the know to tout him as Hong Kong’s first real Formula 1 prospect. Born of Asian-Australian parents, Matt had his first racing experience at just six when his mother took him go-karting in Melbourne during a brief Hong Kong hiatus bought on by the SARS epidemic. But with his father never able to fulfil his own dreams of becoming a race car driver due to parental disapproval, Matt claims his need for speed started much earlier and is probably in the blood. “My mum recently told me that when I was a toddler I saw a Formula 1 car parked in a shopping mall lobby,” Matt tells Localiiz while on one of his regular training sessions at Hong Kong’s racing SIM centre Sideways - one of the young talent’s proud sponsors. “I was apparently trying to climb into the driver’s seat and started crying when my mum wouldn't let me. I also used to have one of those little electric buggies for kids as well as a tonne of Hot Wheels cars. I love everything on wheels, even cycling. If it’s got wheels on it, I like it!” [Updated 14/08/13] Just back from South Korea after winning hist maiden podium position in the fourth round of the Formula Masters China Series, Matt has raced all over the world, and last month placed in the top ten in his first ever European race at the European Formula Renault ALPS at Misano Adriatico. Before moving up to the big leagues, Solomon also snatched first place in Hong Kong’s International Karting Championship 2012 and competed in the World Championships and several other competitions across Asia. Although Matt says he is extremely lucky to have the full support of both his parents, he admits that his mum was a little apprehensive about his choice of hobby after witnessing his worst crash to date when he was just 12. “I flipped out of the kart, broke my back in two places, sprained my ankle and bit my lip,” explains Matt. “The lip was actually the most painful part, and in fact no-one noticed the back until two years ago when I went for an MRI and they said I had unhealed vertebrae!” But despite the obvious danger associated to the sport, Matt says it’s a risk he’s willing to take on his mission to become Hong Kong’s first Formula 1 racer. When asked why he thinks there’ve been no real contenders so far, he says it’s a combination of a lack of facilities and the wrong mentality. “A lot of people perceive racing driving to be extremely dangerous, which of course it is, but so is horse riding,” smiles Matt. “I think parents are put off by that, especially in China with the one child policy; you're not going to let your only son race cars.” Matt’s dad Peter, executive chairman at Electric Sekki, also agrees that a little danger is an acceptable trade off if his son gets to follow his dream.“I'm extremely proud of what he's achieved so far, even though he's made me a lot poorer,” laughs Peter. “He's incredibly determined, and not only has he excelled on the sporting side, but he's also done very well on the school side. We have a deal: no school, no race. “I used to have to sneak out and race in my friends’ cars as my father never approved of it, and he still doesn't like it, even though he's very proud of his grandson. My view is that if I see absolute commitment from my children to achieve excellence in any field, I will support that all the way.”

Read more about Sideways Driving Club in our Insider Review