Beertopia 2013 did exactly what it promised, coming back bigger and better in its second year with more beer, more drinkers and more space. Hong Kong’s biggest craft beer festival almost tripled attendees from 1,700 to 6,000, more than doubled its beers from 90 to 200, and moved from the congested Western Market venue to stretch its legs along the spacious open-air Kowloon Waterfront. Along with great pub grub, drinking games and a full line-up of live music, revellers at the April 13th event were treated to a banquet of craft beers of all variety, ranging in origin from Canada to Cambodia, and everywhere in between. Back for a second year as the Beertopia’s biggest vendor, Hop Leaf said the event far exceeded their expectations. “We’d served as much beer by 5pm as we did all last year, and then triple that again at night,” Hop Leaf CEO and self-proclaimed ‘beer evangelist’ Jeff Boda told Localiiz. “The weather was perfect, everyone seemed to having a great time and people were trying a lot of beer. Our Tuatara New Zealand beer went down particularly well.” While Jeff served plenty of fellow craft aficionados during the day, he explained that Hop Leaf - which delivers great beer directly to customers’ homes - does not only cater to serious beer buffs. “Some people are super into beer and want the extreme experience with higher alcohol and higher taste beers, but then there are people who don't know a lot about craft beer and prefer to be drinking Pilsner,” said Jeff. “Light beers also proved pretty popular this year, which isn’t so common in the UK and US. There’s no shame in that though; if someone is new to the scene you don't give them a beer with 10% alcohol and an outrageous amount of hops - you guide them through gently,” he said. US importers and retailers AmeriCraft were also at the event representing for all things State-side. Along with shifting crate-upon-crate of American ale, the vendors found this year’s crowd had developed a sweet tooth, guzzling down their three flavours of Hard Cider as if there was no such thing as a hangover. “The demand was pretty crazy,” said AmeriCraft founder Laurie Goldberg. “All of us lost our voices from shouting over the crowd and struggled to walk and use our arms the next day – I must have lifted more than 100 cases.” But despite a sore throat and the unavoidable aches and pains of a 14-hour workout, Laurie says Beertopia is the highlight of her year as it’s the only Hong Kong festival where she can bring her passion to the masses. Both committed beer freaks, Laurie and her husband Adam started home brewing in their apartment after moving to Hong Kong two years ago. Rather than continuing with her previous work as an attorney, Laurie decided to go out on a limb and turn her hand to something she loved. “There were so many awesome beers from the US that we couldn't find here and we wanted to give them some exposure as a lot of people think American beer is rubbish,” Laurie told Localiiz. “At Beertopia this year loads of people were really engaging and paying attention to the beers, which is great for craft beer. I just think Beertopia and craft beer in Hong Kong are going to get better and better!”
Beertopia 2013: More Beers, More Food, More Space! April 3rd 2013: Hong Kong's only international craft beer festival is back and bigger than ever. 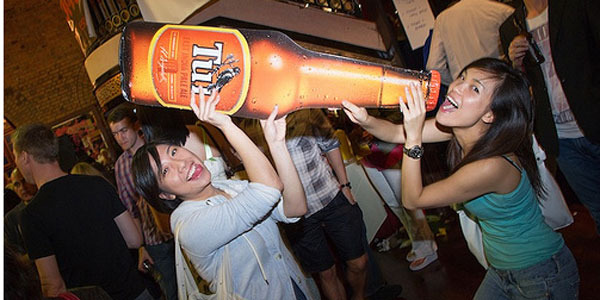 Building on the success of last year's sold out event, Beertopia 2013 will take place on SaturdayApril 13th 2013 at the West Kowloon Waterfront. With 70,000 square feet of waterfront space and the Hong Kong Island skyline serving as the backdrop, this year's festival will feature more than 200 different beers from around the world, up from 90 last year, with Localiiz's Hop Leaf and AmeriCraft also in attendance. In support of this great event, we will be running a special ticket giveaway until Tuesday April 9th In addition to beer, there will be more food vendors and a larger line-up of live bands. There will also be a dedicated beer lectures tent featuring guest brewmasters from breweries around the world, as well as a separate games tent for the beer pong and flip cup crowd. “The interest in last year's festival exceeded our most optimistic expectations,” said Jonathan So, founder of Beertopia. “This supports the idea that interest in craft beer is gaining momentum in Hong Kong.” “The selection of beers available in the city is now larger than ever. More and more restaurants and bars are stocking craft beer. In expanding the offering at this year's Beertopia, Hong Kong is now on its way to having a world-class craft beer festival to call its own.” Beertopia was started in 2012 as a response to the lack of beer festivals in Hong Kong featuring high quality craft beers from around the world. The goal of the festival is to raise the awareness of, and interest in, craft beers in Hong Kong in a fun and lively atmosphere. Tickets cost $250 and $300 online, and $300 and $350 on the door. Tickets went sale in earlyMarch and are available both online and at select bars around Hong Kong.

Where to find the best Peking duck in Hong Kong