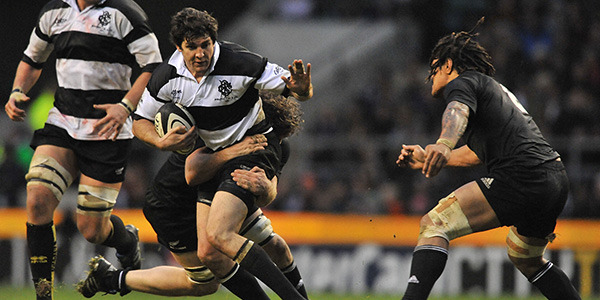 The Barbarians are a step closer to completing their squad for their eagerly-anticipated two-match tour against the British and Irish Lions in Hong Kong on June 1st, after announcing the 22 players who will form the nucleus of the touring party. Included in the latest batch of star names to confirm their availability are former Lions players James Hook, Dwayne Peel and Matthew Rees, All Blacks’ Joe Rokocoko and Nick Evans, four members of Italy's Six Nations' team, Sergio Parisse, Martin Castrogiovanni, Leonardo Ghiraldini and Alessandro Zanni, and Springboks’ B J Botha, Marco Wentzel and Francois Louw. In all, 10 different nationalities are represented, including two new flying wings, United States Eagle Takudzwa Ngwenya and Hong Kong's sevens' skipper Rowan Varty, plus Samoa's world-class scrum-half Kahn Fotuali'i. In the best Barbarians' tradition, two uncapped players have been invited – Kiwi full-back Jared Payne, currently with Ulster after several seasons of Super Rugby with the Crusaders and Blues, and former England under-20 flanker Sam Jones of London Wasps. Team manager Derek Quinnell said, “Our selection process has taken several months and is still not quite complete. Over the next week or so we will be monitoring the domestic play-off matches in Europe and the various national squads for the summer tours. Also, one or two players in the squad announced that they may not be available for both of our matches, so we expect to add other significant names to the team in the near future.”

The Barbarians kick-off their tour against England at Twickenham on May 26th before flying to Hong Kong for the historic encounter against the British and Irish Lions on Saturday June 1st.