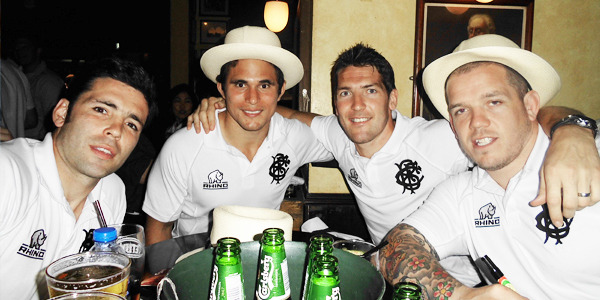 Wan Chai was awash in a sea of black and white bulk on Tuesday night as the mighty Barbarians enjoyed some relaxed drinks ahead of their historic Hong Kong clash with the British & Irish Lions on Saturday (June 1st). Sporting their training shirts and tasteful matching trilbies, the entire 28-man monster squad piled into Delaney’s for a one-night-only meet and greet, sponsored by GUINNESS. The Barbarians, widely regarded as the world’s most famous touring club, have invited players from 31 nations to don the famous black and white jersey since the team’s inception 120 years ago. Much to the pride of local rugby fans, Hong Kong is being represented in the Baa-Baas for the first time ever after HKRFU captain Rowan Varty was added to the 2013 squad. Speaking exclusively to Localiiz, speedy strike force Varty, who - measuring in at a pint-sized 5’ 8’’ - is literally dwarfed by his towering team mates, admitted feeling a little overwhelmed when he first received the coveted invitation. “When I started training with the guys it was quite intimidating, but now I’ve got to know them I’ve found they’re really very down to earth," said Varty. "All the guys here have done some incredible things in rugby, so it's kind of scary to think that they're all in the same room and I'm involved with them in some way. I think I’m the smallest guy on the team, but as the smallest on the Hong Kong team it's nothing new, and hopefully I'll hold my own!” When asked how his Hong Kong team mates feel about his prestigious appointment, Varty said they were all a little disappointed not to be chosen, especially winger Tom McQueen, who was tipped by Lions head coach Warren Gatland to join the Barbarians after an impressive performance at this year’s Hong Kong Sevens. “My teammates haven’t said much about me being picked for the Barbarians,” said Varty, “and I know they wish they were playing instead, which I understand. Tom got his hopes up after Localiiz revealed the Gatland tip, but I told him I'll pinch him some kit, so he's happy enough.” On Sunday (May 26th), Varty joined the legendary likes of France No 8 Imanol Harinordoquy, Wales stars James Hook and Paul James, and royal calibre captain Mike Tindall for the start of the Barbarian’s two-match tour, which ended in a rather disappointing 40-12 defeat to England at Twickenham. But it looks like 27-year-old winger still managed to impress in his 20-minute show of skill, with head coach Dai Young looking beyond the overall loss to praise Varty after the match. “I spoke to the coach about my performance against England at the weekend and he said he was happy with me,” smiled Varty. “He also said in the press conference that I didn't look out of place, which among these guys is a huge compliment!” But despite the mass of mutual appreciation and all-round back-slapping among the players and coaches alike, the Baa-Baas know only too well that they have to up their game if they hope to crush the hearts of the hungry Lions in the first match of their Australian tour at Hong Kong Stadium on Saturday. The Barbarians have played in Hong Kong on six previous occasions and even won the Sevens on their first attempt in 1981, but last met the Lions way back in 1977. The Lions squad for the 10-match 125th anniversary tour to Australia is made up of 15 Welshmen, 10 Englishmen, nine Irishmen and three Scotsmen, and will be captained by Wales’ Sam Warburton. “We will definitely have to step things up on Saturday as the lions will want to start their tour well and win all games, including ours. Having lost to an under-strength England team last weekend, we will have to pull something special out,” admitted Varty.