Traditional Hakka cuisine is one of the many legacies of the Hakka people, an ancient Han Chinese community that emigrated from northern and central China to southeastern and southern China. Over the centuries, they have also settled in other countries around Asia, such as Thailand, Indonesia, and Singapore. Authentic Hakka gastronomy originated during the Song dynasty (960 to 1279 AD) and is famous for various dishes of unique taste and aroma, mostly centred around meat.

Typical for Hakka cuisine is the focus on texture. Meat, whether roasted, stewed, braised, or preserved, is prepared to highlight the food texture as a central element. Therefore, Hakka masters have always been known as true culinary virtuosos when it comes to cooking meat. Hakka gastronomy is one of the most significant cuisines in southern China, notable for its simple and nourishing dishes, as its people have long been engaged in agricultural labour and physical work, which burns a lot of energy and requires ample sustenance. Hakka cuisine consists mainly of foods such as rice, pork, tofu, and preserved vegetables, while rice wine, soy sauce, ginger, garlic, and salt are used to preserve and flavour food. Additionally, different fragrant herbs are used for food preparation, which gives dishes an intense flavour, with a salty, aromatic, and umami note.

If you are a passionate gourmand or adventurous foodie who wants to discover a gastronomic world of exciting smells and tastes, here are the 10 most famous traditional Hakka dishes that can easily become a part of your everyday life.

Hakka stuffed tofu (酿豆腐; niàng dòu fu) consists of cubes of stewed tofu, stuffed with minced pork, mushrooms, and other vegetables or diverse seafood. It features a rich, sumptuous aroma and intense taste through the liberal use of soy sauce and a braising technique until it is cooked to perfection. Fragrant spices and the exceptional culinary talent of the Hakka people are responsible for the fact that stuffed tofu is considered the crowning glory of rich Hakka gastronomy.

When the Hakka migrated from central China to the south, the area did not offer enough grains from which they could make flour for dumplings—which was the original basis for this dish. Thus, they were forced to re-orient themselves to tofu, a foodstuff made of condensed soy milk that is pressed into firm, white blocks. One version of this dish requires frying tofu in a pan to get a beautiful golden-brown colour with a crispy outer crust that offers a slightly toothsome crunch. 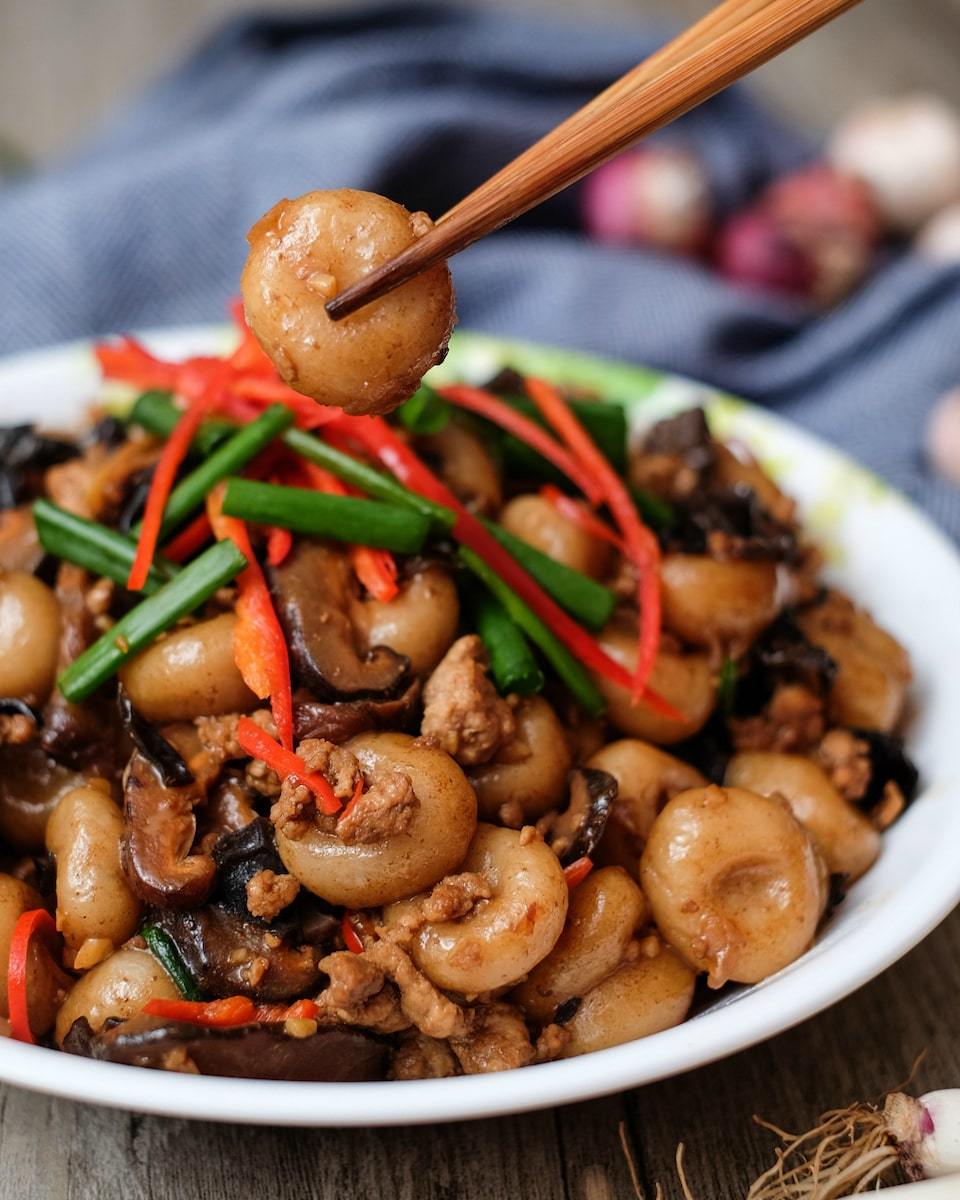 No family table during the Lunar New Year celebration can be imagined without yam abacus seeds (算盘子; suàn pán zi). This tempting recipe consists of balls of mashed yam and tapioca flour, topped with an aromatic sauce of minced meat, shrimp, cuttlefish, and black mushrooms. After cooking, these balls are soft on the outside and chewy on the inside with a strong smell of yam. Together with a piquant dressing, yam abacus seeds can be eaten both as a main dish and a starter. With the addition of garlic and shallots, the whole dish exudes an irresistible fragrance.

In Chinese tradition, this dish is a symbol of family unity, love, and well-being—in fact, the very appearance of the balls, reminiscent of abacus beads (a Chinese ancient counting instrument), carries a symbolic message of progress and prosperity with the meaning: “There is money in abundance!” 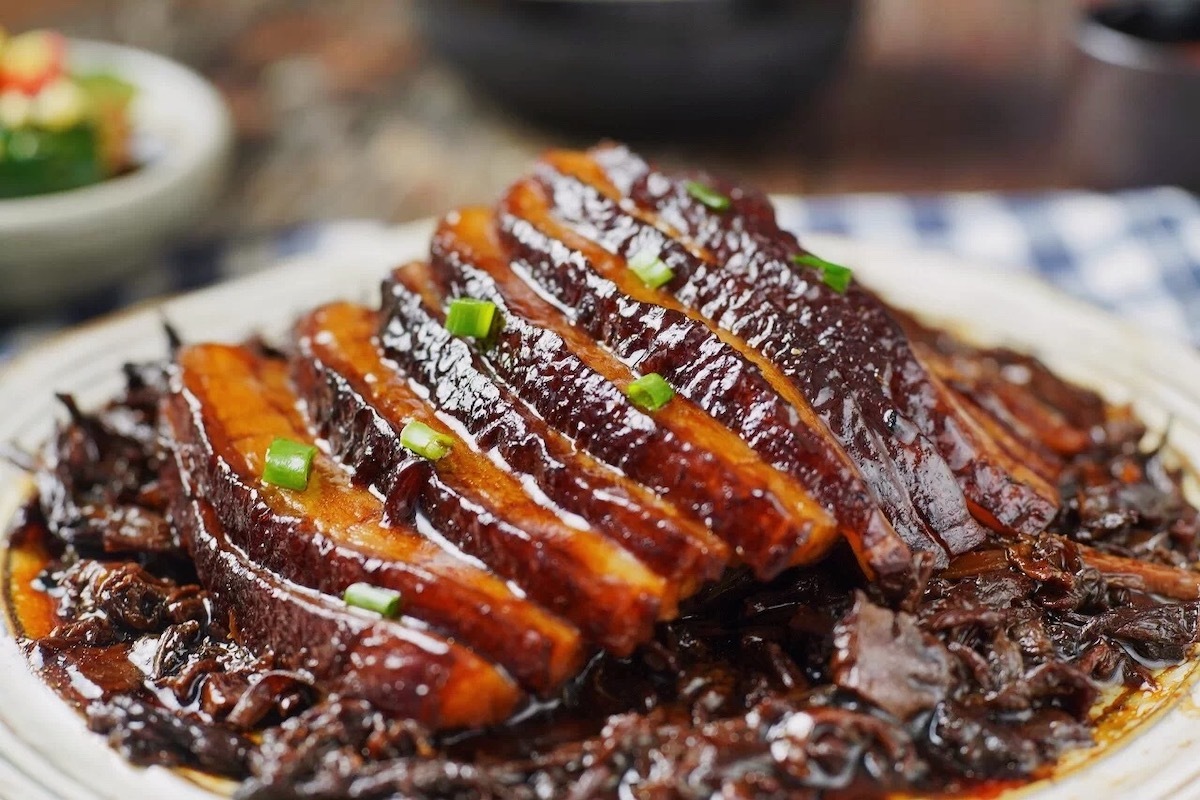 If you are a passionate gourmand, then pork belly with preserved mustard greens (梅菜扣肉; méi cài kòu ròu) is the right choice for you. Thick slices of pork belly are topped with a fragrant, spiced marinade to give the meat a particularly attractive glow. A sharp, scented note of mustard greens—an indispensable ingredient of this labour-intensive dish—provides a spicy mouthfeel, which all your senses will enjoy. First browned, braised, and then lightly roasted, the pork is so soft that it simply melts on the tongue, and with the addition of chewy and salty vegetables, full pleasure is guaranteed. 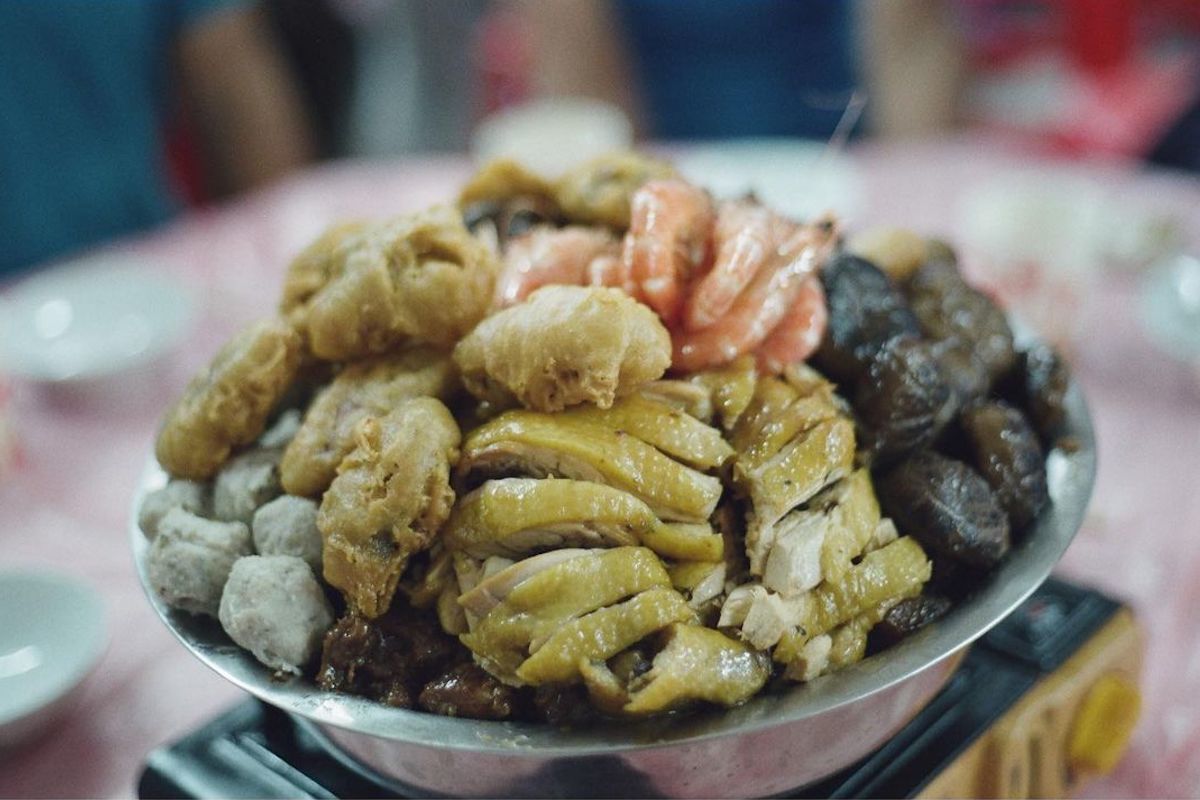 Poon choi (盆菜; pén cài) is a traditional dish of the ancient Hakka people, said to have been invented in the late Southern Song dynasty (1127 to 1279 AD). Its preparation is culturally connected to Hong Kong’s picturesque walled villages and the customs of those who have lived there for centuries, representing Hakka cultural inheritance and its firm roots.

This flavorful dish, composed of layers of vegetables and meat, has strong nutritional values. Poon choi is cooked in a metal basin, which lends the dish its name of “basin cuisine” and “big bowl feast.” There are rules for preparing this dish as well, where ingredients have to be arranged in layers. The lower layers consist of cheaper ingredients such as radishes and tofu, and the tastiest and more expensive ingredients, such as seafood, are on the top. Its specific aroma is given by a balanced ratio of meat and vegetables. Poon choi is a common menu item during Cantonese festivals and on special occasions, such as moving the family to a new house to mark a happy beginning. 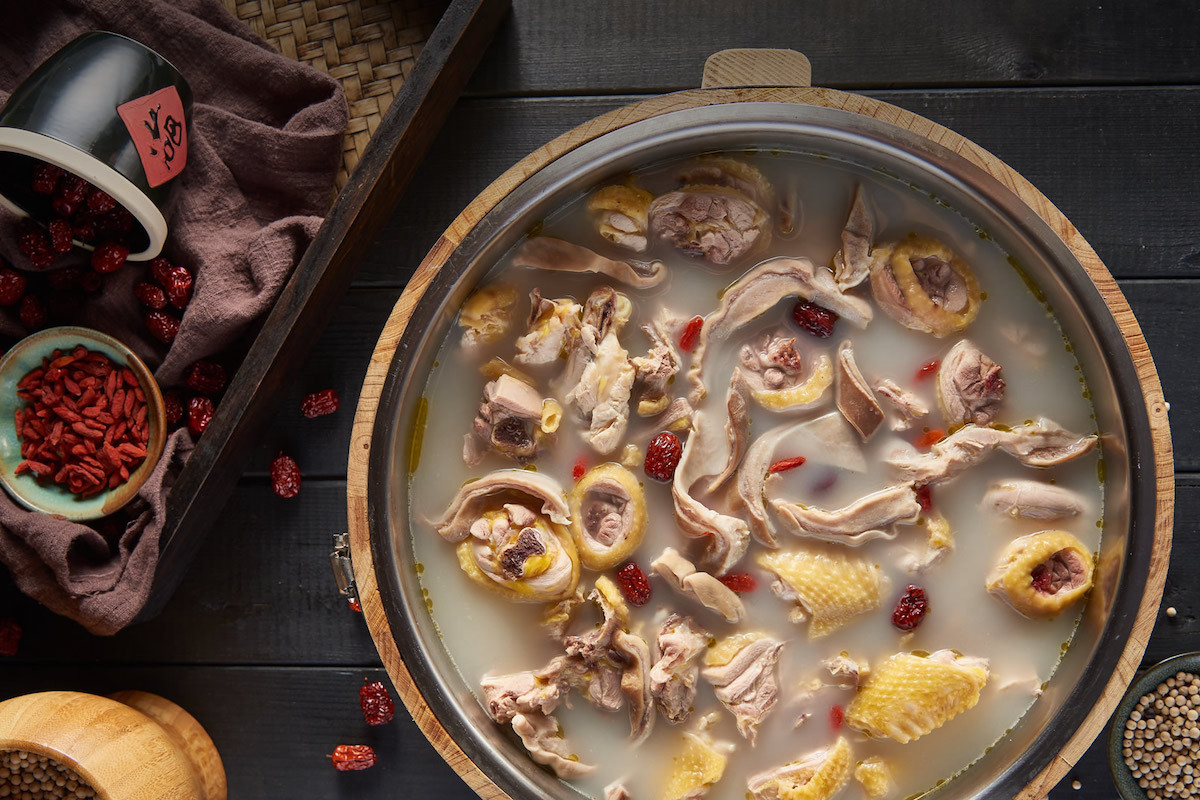 Pork stomach stewed chicken (猪肚鸡; zhū dù jī) is a speciality of Hakka cuisine and represents a popular starting soup in the feasts and celebrations of Hakka people. Its preparation requires a lot of time, patience, and excellent culinary skills. Cooked chicken is mixed with various spices to give it a refreshing aroma, which then fills the inside of the pork stomach. It is then carefully simmered over low heat so it does not disturb the meat texture, while the released offal juices are mixed to form a thick and salty sauce. Thanks to the right choice of herbs and special preparation techniques, the chicken is tender and soft while the pork stomach is chewy, and this contrast makes this dish a real Hakka delicacy.

If you are a fan of bright colours, exotic flavours, and unusual scents, then stuffed bitter gourd (酿苦瓜; niàng kǔ guā) is an authentic Hakka dish that you should not miss out on. Light, delicious, and rich in minerals and vitamins, it is said to lower cholesterol and blood sugar concentration and has a beneficial effect on one’s overall health.

Its preparation is simple and consists of stuffing a bitter gourd with a juicy filling, consisting of sticky rice, mushrooms, and pork. It is then fried and stewed over low heat until cooked to perfection. Prepared this way, the bitter gourd has no bitter taste at all, but one can taste a pleasant sweetness in the mouth, which can be a real surprise for passionate gourmands who are constantly looking for new gastronomic discoveries.

Where to find the best Cantonese desserts in ... 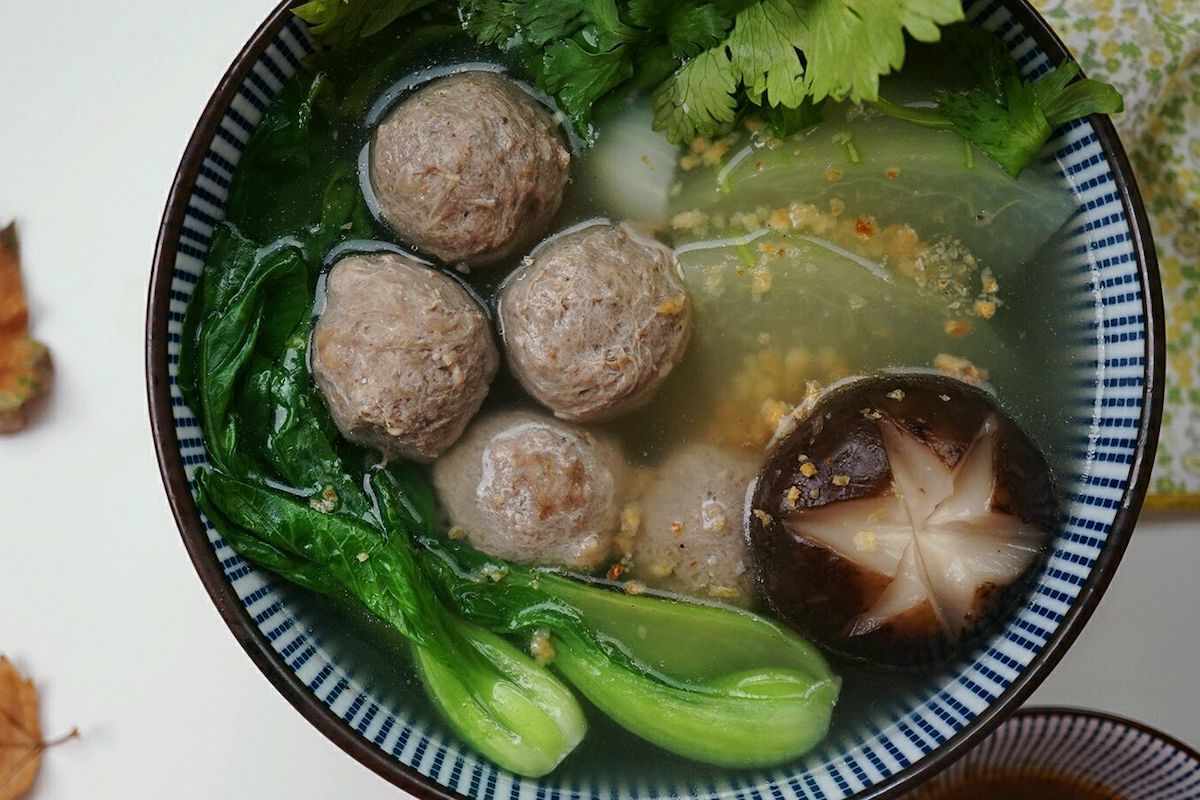 Authentic Hakka meatballs (牛丸汤; niú wán tāng) are coated in cornflour and fried in hot oil until the outer crust develops a golden colour, then dipped in a piquant sauce dominated by a pleasant combination of salty and moderate sweet notes. With the addition of various spices and vegetables such as onions and garlic, green peppers, and carrots, the sauce becomes spicier and heartier, with even more flavour and aroma. Hakka meatballs are normally eaten in clear soup. 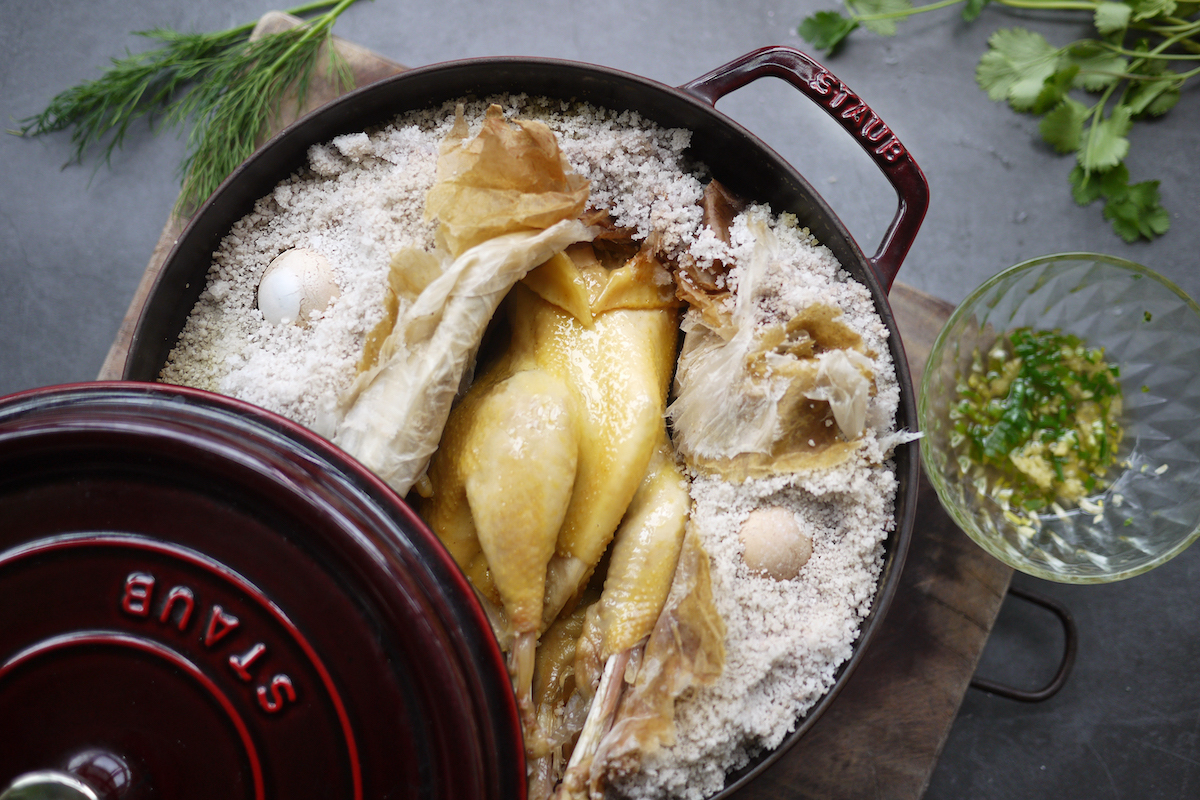 If you want to eat in the traditional Hakka style, many will recommend for you to try the unconventional salt-baked chicken (盐焗鸡; yán jú jī). It is considered one of the most popular dishes of this colourful, delicious, and rich cuisine—almost like the Hakka equivalent of the Mediterranean salt-crusted fish.

To make this dish, coat the chicken in salt, fill it with green onions and ginger, add more salt to the pot, and then fry everything over low heat for half an hour. In that way, the meat is marinated in its own juices, becoming tender, fragrant, and flavourful from added spices and aromatic herbs. Salt-baked chicken is eaten with a portion of rice, and it is an ideal combination that follows the authentic gastronomic taste and tradition of the Hakka people.

Hakka noodles (客家面; kè jiā miàn) may seem simple to you, but its preparation techniques are key factors for the noodles to turn out with the perfect texture. When the noodles are cooked, they are topped with minced pork—the best cut is the pork belly. Add chopped spring onions and minced pork to the sauce and pour all of this over the noodles. Many types of noodles are used in Hakka culinary traditions, but for Hakka noodles, flat egg noodles are preferred.

For many, chicken in Chinese rice wine (醉鸡; zuì jī)—also known as drunken chicken—is a completely exotic experience. You may hear about some meat dishes braised in wines made from grapes, but for a true taste of this gastronomic delight, you have to visit some of the regions where Hakka cuisine is still nurtured. According to the authentic recipe for this dish, chicken meat is stewed in rice wine with ginger and spices such as red dates and goji berries for a well-rounded taste.

In addition to being delicious, drunken chicken also has great nutritional properties. For centuries, it has been served to women after childbirth to regain strength and vitality as quickly as possible. It also improves circulation and is mostly prepared during cold winter days to warm the body. 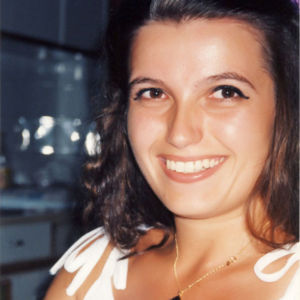 Working in the tourism industry and as a lifestyle writer has fuelled Nina’s passion for travel, and there’s nothing that she enjoys better than deep-diving into the colourful history, cultural heritage, and traditional gastronomy of her favourite places. She loves to discover new destinations and enjoys exotic foods, art, nature, and picturesque landscapes. Read more of her writing on travel, food, and health here and follow her on Twitter and Pinterest.