Header image courtesy of @k.c.leung (via Instagram) and Terry Sze (via Shutterstock)

Knowing Hong Kong’s ability to wow with both its metropolitan and natural beauty, planning a day visit to Sai Kung’s Kau Sai Chau will just further prove our city’s bilateral charm. Accessible by a footbridge from Yim Tin Tsai and by ferry from Sai Kung, the island contains Hong Kong’s only public golf course. While Hong Kong having a public golf course may come as a surprise to you, there is still a lot to uncover about this glorious island. From coasteering, fishing, exploring the local village, and joining villagers in their annual festivities, Kau Sai Chau is a true escape for everyday Hongkongers. 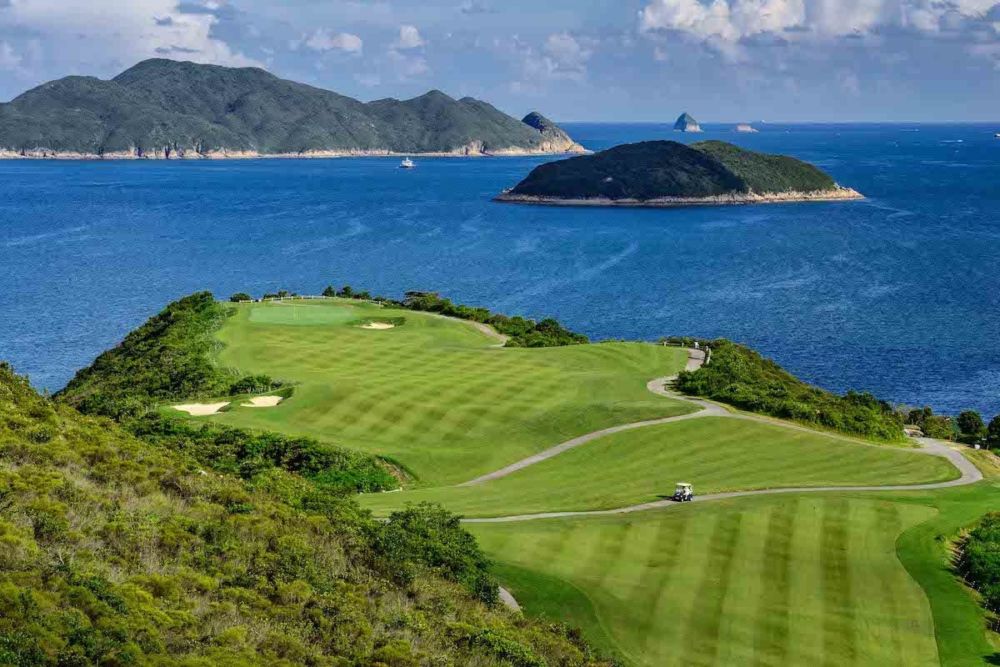 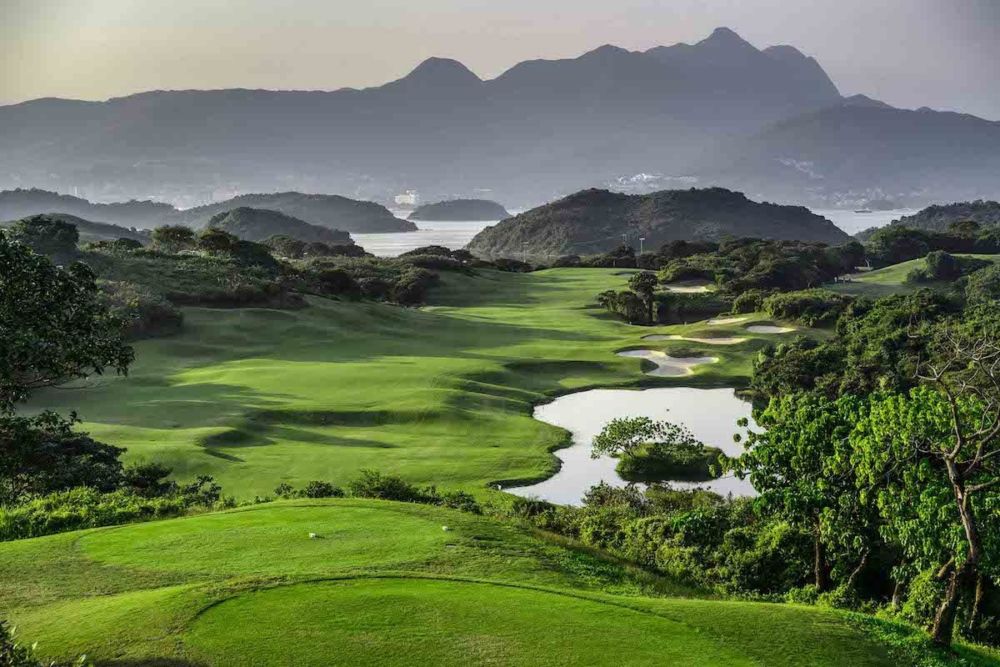 Kau Sai Chau (滘西洲)—previously referred to as Keui Island (巨島)—is located in the Sai Kung peninsula. Kau Sai Chau and Yim Tin Tsai are connected by a footbridge called the Jade Girdle Bridge (玉帶橋), so you will often find that visitors will visit both islands in one day trip. A trek around Kau Sai Chau is family- and dog-friendly with a flat and steady path along the way, but the island gained more visitors after the public golf course was set up.

Situated in the northern part of the island, the Jockey Club Kau Sai Chau Public Golf Course is spread over 250 hectares of land, with a total of 52 holes across its North, South, and East courses. Golfers have been playing on these grassy plains since 1995, and the view from the peaks and valleys are truly a sight for sore eyes!

While golfers tee off up north, heritage enthusiasts are catered down south—this is where Kau Sai Wan and Kau Sai Village are located, best accessed from the Sai Kung Public Pier by ferry. Even though the village consists of only 10 houses, spirits are high on the thirteenth day of the second Lunar month when the Hung Shing Festival is celebrated at the small temple dedicated to the guardian of seafarers. Less superstitious visitors might prefer to head down to the Kau Sai Fish Culture Zone instead to better learn and appreciate the local wildlife.

You can get to Kau Sai Chau via Yim Tin Tsai up north and Kai Sai Village Pier down south of the island, both by ferry from the Sai Kung Public Pier. Choosing your route determines which activities you will be going for. We suggest taking the north route for a breezy beginner trek, and the south route for a challenging uphill battle.

You can get to Yim Tin Tsai via kaito from the Sai Kung Public Pier for $60 per ticket. Your ticket includes access to Hong Kong’s only remaining and completely operational salt pans, so if you plan on exploring both islands, this is your most convenient option. Do note that are different departure schedules on weekdays and weekends. Whether you plan to spend more time exploring the salt pans or walking across to Kau Sai Chau, be sure to plan ahead.

For more details on the ferry schedule and advanced group bookings, refer to our full guide here.

You will need to charter your own boat from Sai Kung to get to Kau Sai Village, as there are no regular ferry services. We recommend LIK Speedboat Service (a dog-friendly option), Wake2Chill, and Splash Hong Kong. 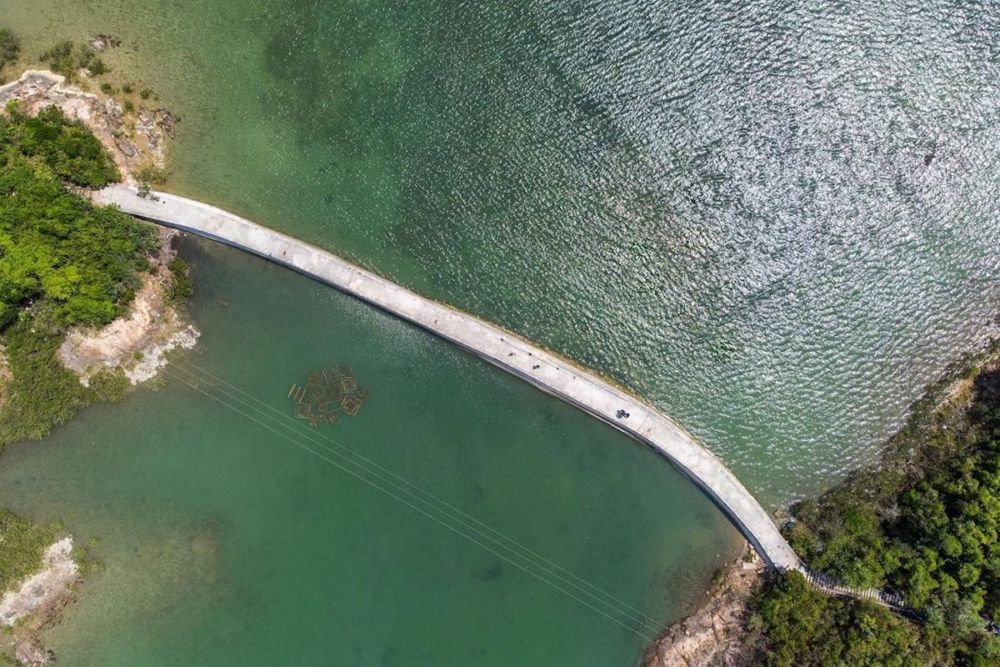 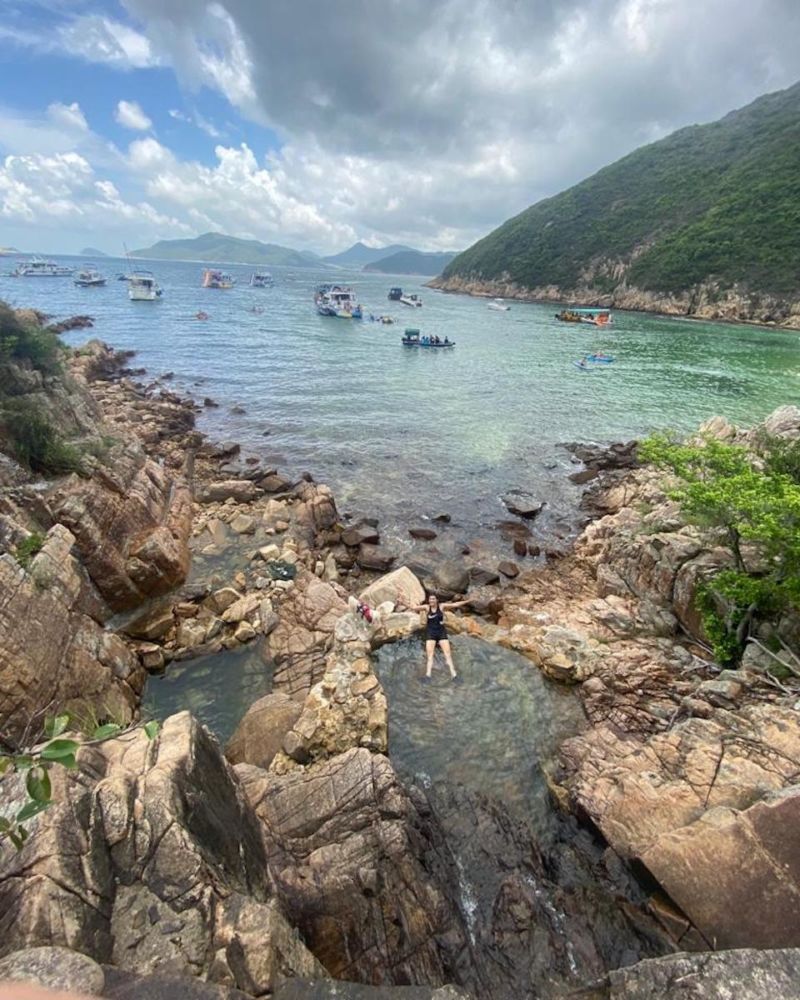 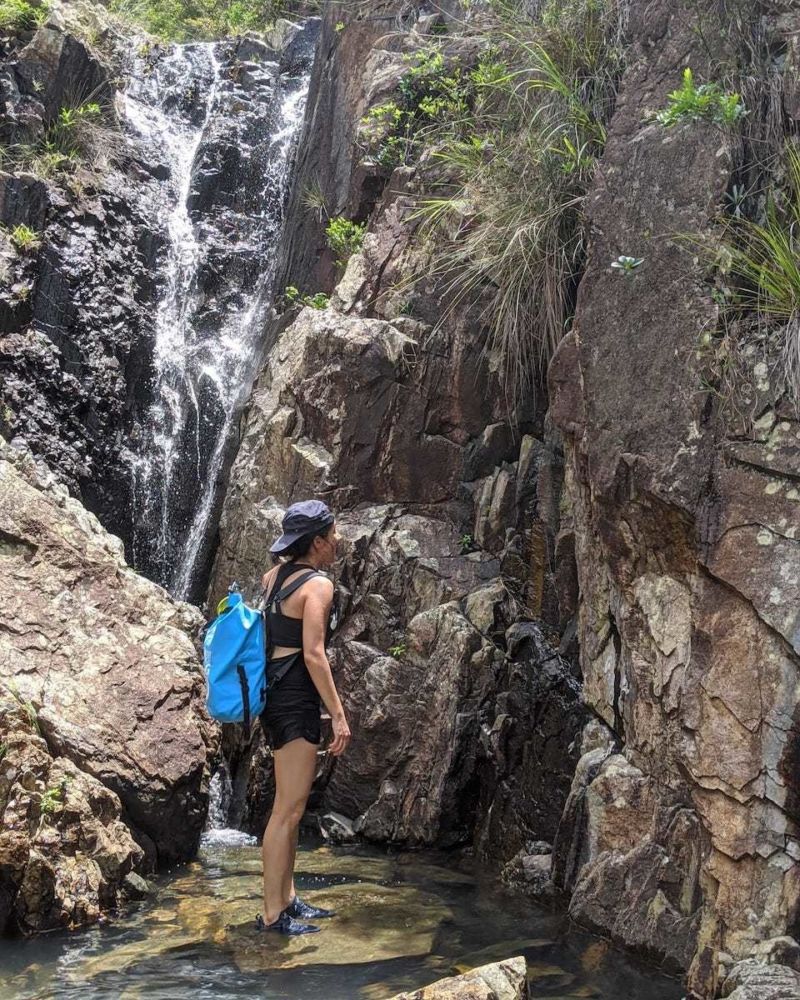 For a family-friendly hike, the journey begins once you alight from the kaito ferry at Yim Tin Tsai. Beautiful art installations from the Yim Tin Tsai Art Festival will greet you. A circular path around the island has been laid out for sight-seeing visitors. Start from Chef de Yim Tin, and take in St Joseph’s Chapel on your right. Feel free to circle around the island first before exiting at the southern tip. When you spot a stone bridge with no side railings, you are on the right track. From here, continue along to enter Kau Sai Chau. You will soon find yourself walking along a well-paved path, and you will soon arrive at the public golf course that everyone’s been raving about.

However, if you have decided to take the road less travelled and charter your own boat to the south of the island, there is a water stream to the right of the beach—this is the uphill climb we mentioned earlier with amazing rock pools. Please do not attempt this unless you have packed suitable mountaineering equipment, as the climb is difficult. 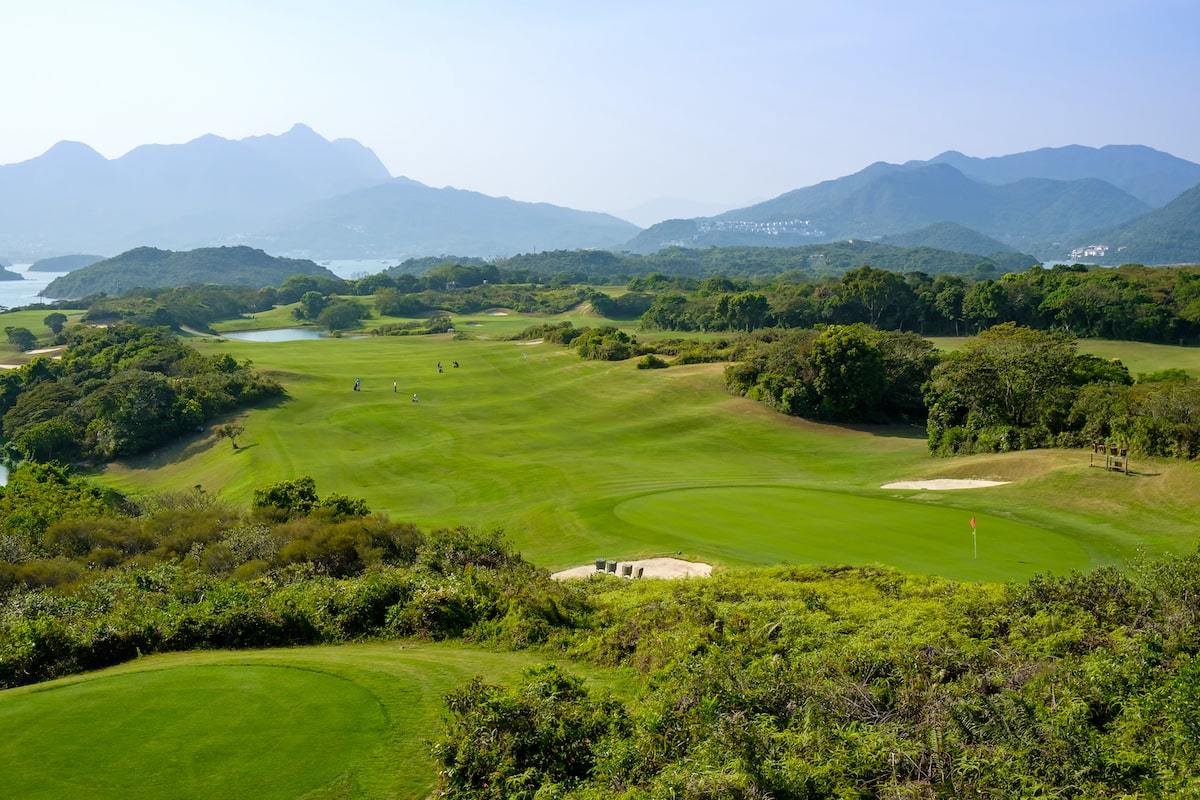 Most golf courses are privatised by exclusive members’ clubs, but not so on Kau Sai Chau. At The Jockey Club Kau Sai Chau Public Golf Course, access is, well, public and open to everyone! Choose to practise your swings on three stunning courses, with one designed by renowned South African golfer Gary Player himself. Remember to first register online and book a tee time before heading out to the island—pricing varies. You can also spend some time shopping for apparel, clubs, and more at the Pro Shop. And did we mention the killer 360-degree views? 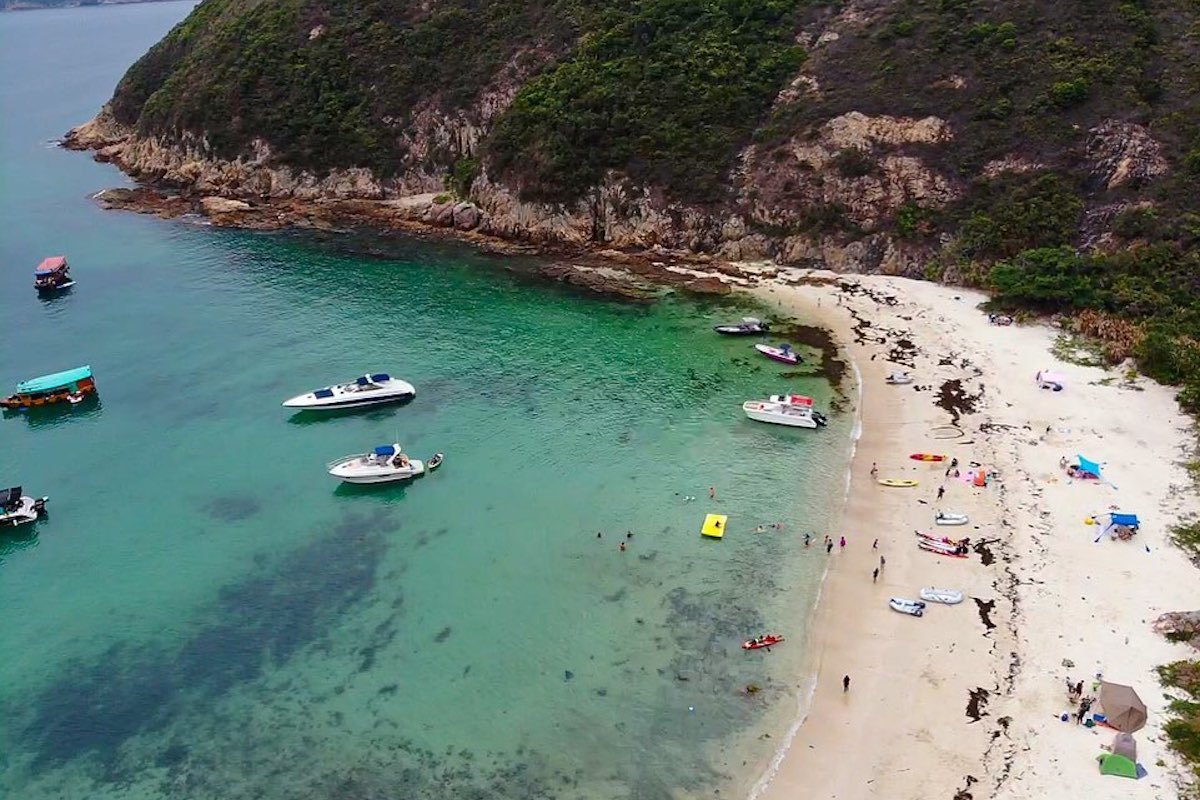 In rock pools or at the beach—the choice is yours! Kau Sai Chau offers crystal-clear water for cooling off on a hot summer’s day. Pack a picnic, bring your dog, and hop on a pet-friendly speedboat from Sai Kung for an island adventure, and soak up all the vitamin D on Kau Sai Chau’s intimate little beach while you’re at it.

And of course, there is something for thrill-seekers, too. Coasteering is not a widely popular outdoor activity in Hong Kong, but if that’s the adrenaline rush you’re looking for, then Kau Sai Chau is the perfect place for your first time. 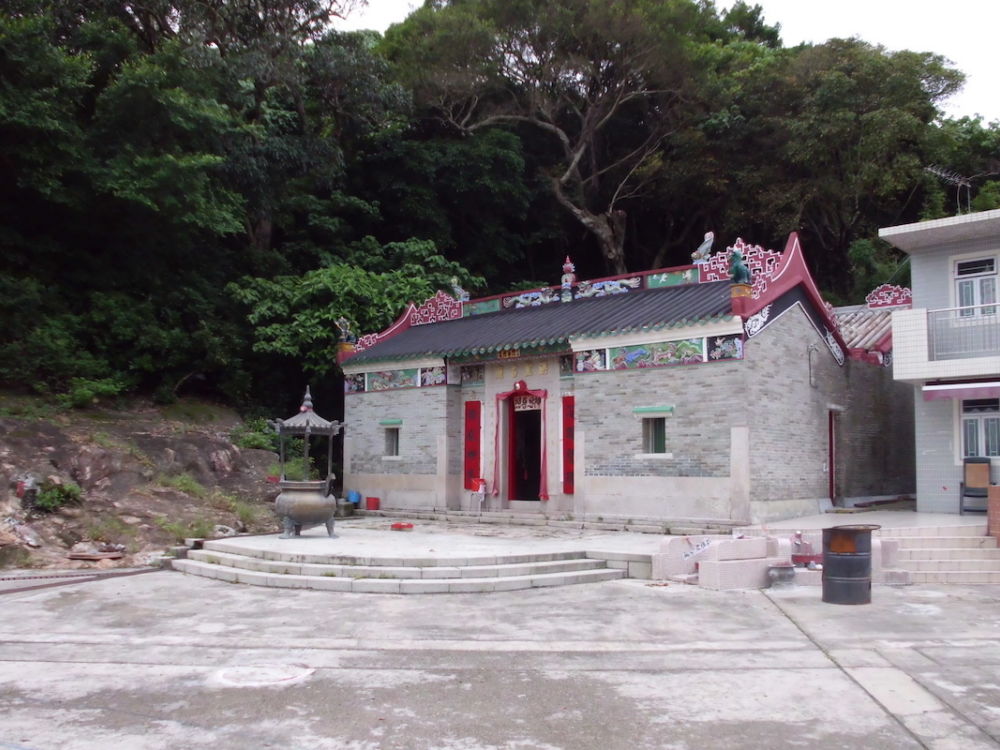 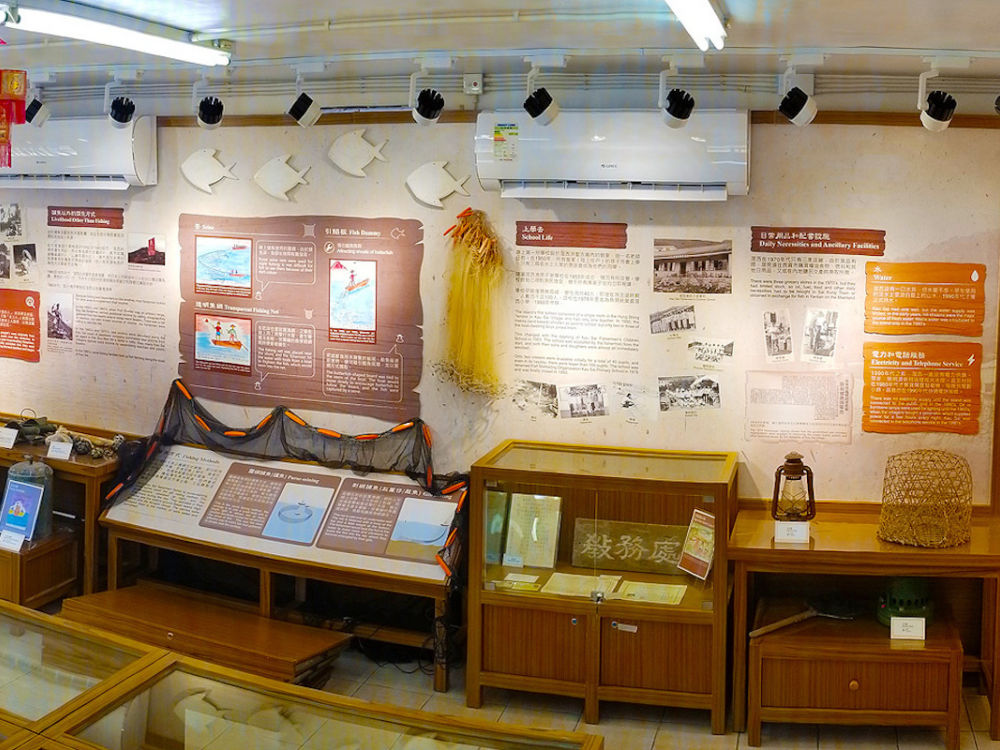 Visit a historic temple and exhibit

Despite its remote location, Kau Sai Chau is, in fact, home to a lone Hung Shing Temple, believed to be built before 1889. Featuring a decorative Xuanshan roof clad in ornate sculptures and tidy tiles, the small temple is in prime condition despite its age, having gone through four renovations in the last 70 years alone.

As a declared monument, the Hung Shing Temple was the recipient of an “Outstanding Project” distinction from the UNESCO Asia-Pacific Heritage 2000 Awards. The Hung Shing Festival (洪聖誕) is still celebrated here during the second month of the Lunar calendar, so time your visit right to get a glimpse of the festivities, where villagers continue to pay tribute to the revered deity in the footsteps of their seafaring ancestors.

If you want to learn more about the history of this island, hit up the Kau Sai Village Story Room, which was established by the villagers with support from the 55th Orient & Southeast Asian Lions (OSEAL) Forum. Visitors will get the chance to marvel at old Kau Sai Village fishing and cultural relics, as well as preserved Hakka herbs. Do keep in mind that it is only open on Sundays and public holidays (except Chinese New Year) from 10 am to 4 pm.

Fishing is a great activity for the whole family! Gather ‘round and learn where our food comes from at the Kau Sai Fish Culture Zone. As residents celebrate and worship Hung Shing (洪聖) at the nearby Hung Shing Temple, here, you’ll be able to experience life as a fisherman. The water is believed to have been blessed by the deity himself, with lots of freshwater fish ready to be cooked and enjoyed right away. It’s a farm-to-table experience! Do note that the rafts set up within the Kai Sai Chau Fish Culture Zone are private and you need to seek approval first before fishing on them. 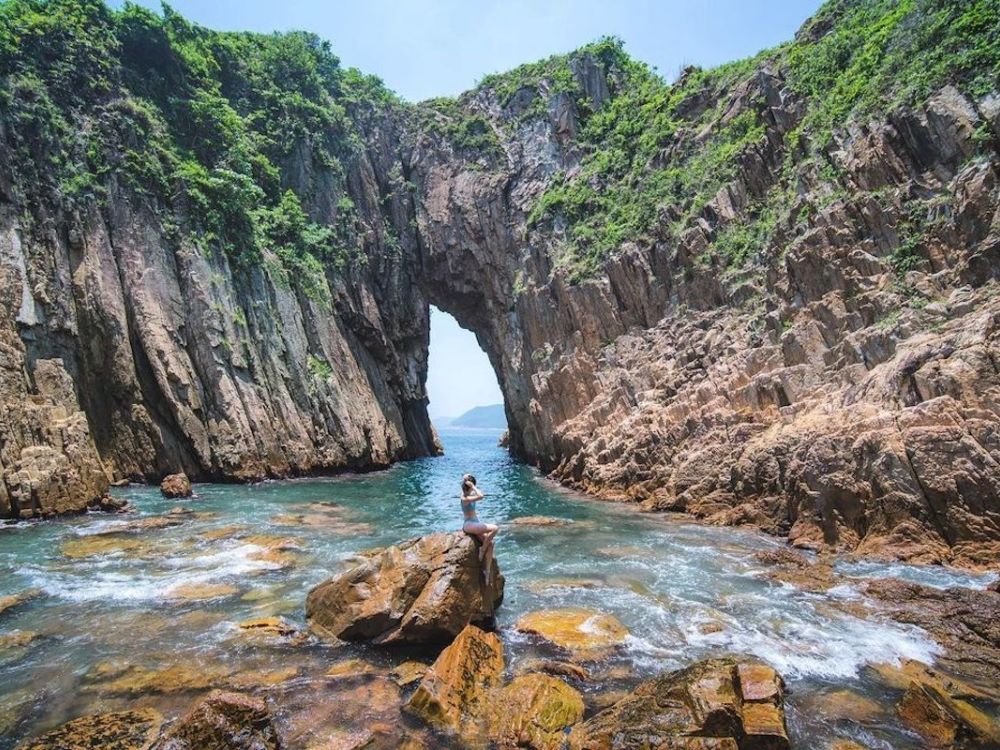 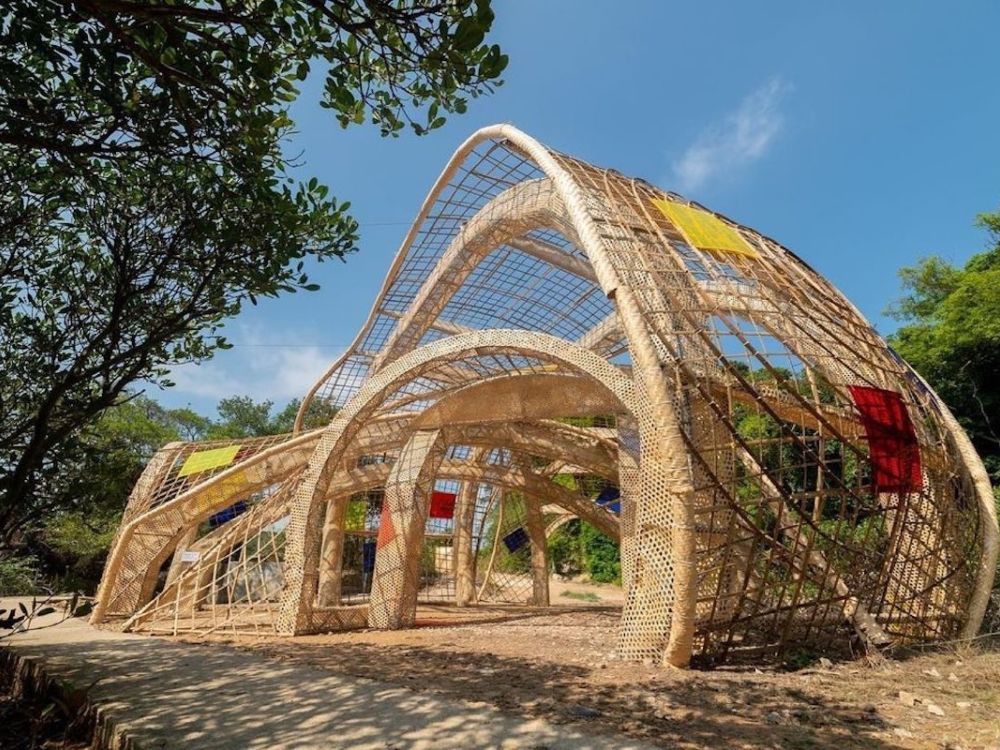 Separated by a narrow channel, Jin Island and Kau Sai Chau are very close neighbours. It is a great addition to any island-hopping itinerary. Beyond the number of outdoor and water activities to be done here, you can also admire the natural landscape. Its unique positioning and exposure to winds and waves make up its unique, rocky pattern. 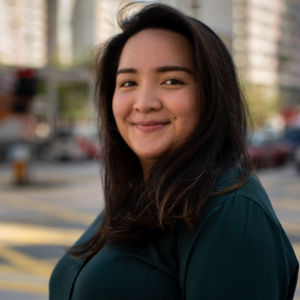