Hong Kong’s athletes are on fire at the Tokyo 2020 Olympic Games! Our home-grown table tennis team—comprising Doo Hoi-kem, Minnie Soo Wai-yam, and Lee Ho-ching—have just obliterated the competition in a 3–1 win over Germany in the bronze medal match for women’s table tennis.

With a few more days left in the Tokyo Olympics, Hong Kong has already completed a perfect set of medals—one gold, two silvers, and one bronze. It also marks Hong Kong’s fourth medal at the 2020 Tokyo Summer Olympics and the seventh medal overall—our city has won more medals at the Tokyo Games alone than in all the previous ones combined (more on Hong Kong’s history at the Olympics here).

Doo, Soo, and Lee’s win is Hong Kong’s second table tennis Olympic medal, with the first being from when Li Ching (who is now the coach of the Hong Kong women’s table tennis team) and Ko Lai-chak won silver for men’s doubles in the Athens 2004 Summer Olympics.

After Lee and Doo’s initial 1–3 loss to Germany’s Shan Xiao-na and Petrissa Solja in the first doubles match, Soo dominated in a 3–1 win against Han Ying, tying the score 1–1. Doo Hoi-kem then showcased her breathtaking skill in a 3–0 landslide win against Petrissa Solja in the third match, bringing the score up 2-1. Finally, Minnie Soo Wai-yam took the floor once more, this time against Shan Xiao-na, and became the unexpected heroine of the team and our city by clinching the fourth match—and the bronze medal—with a 3–0 victory. 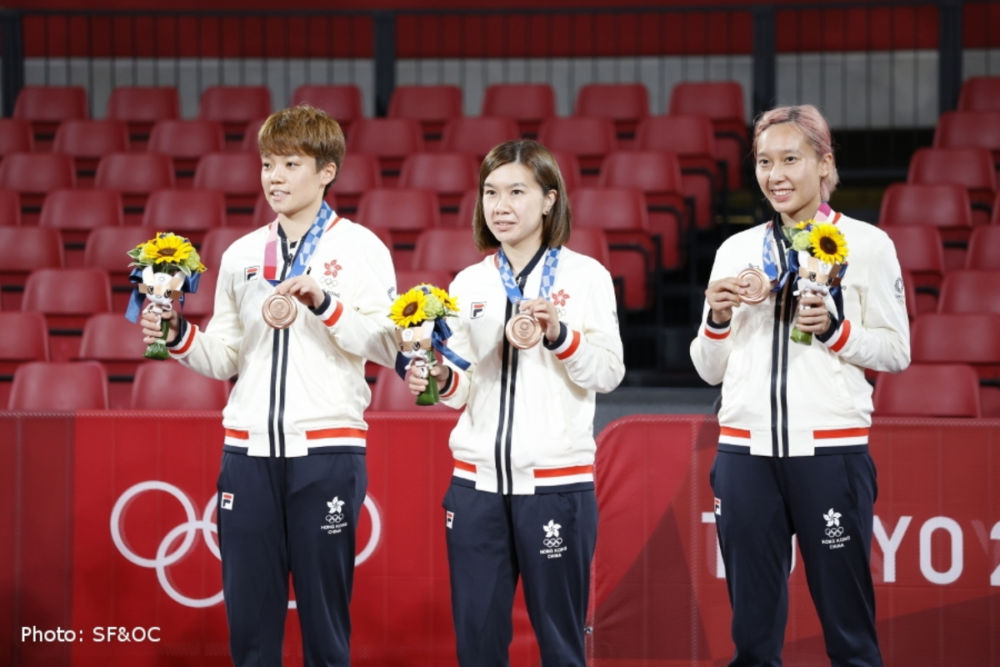 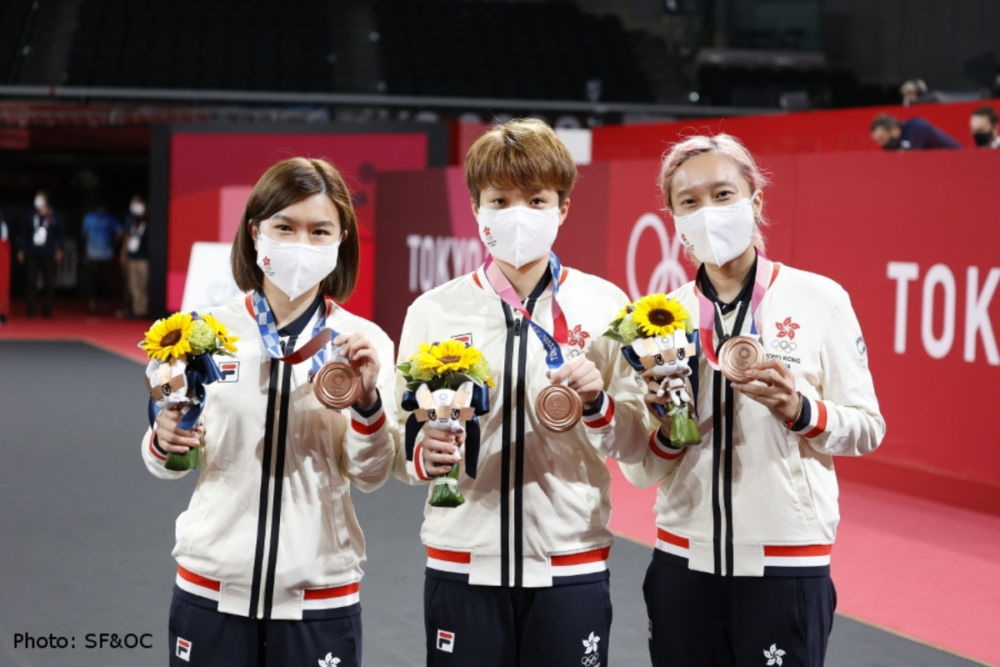 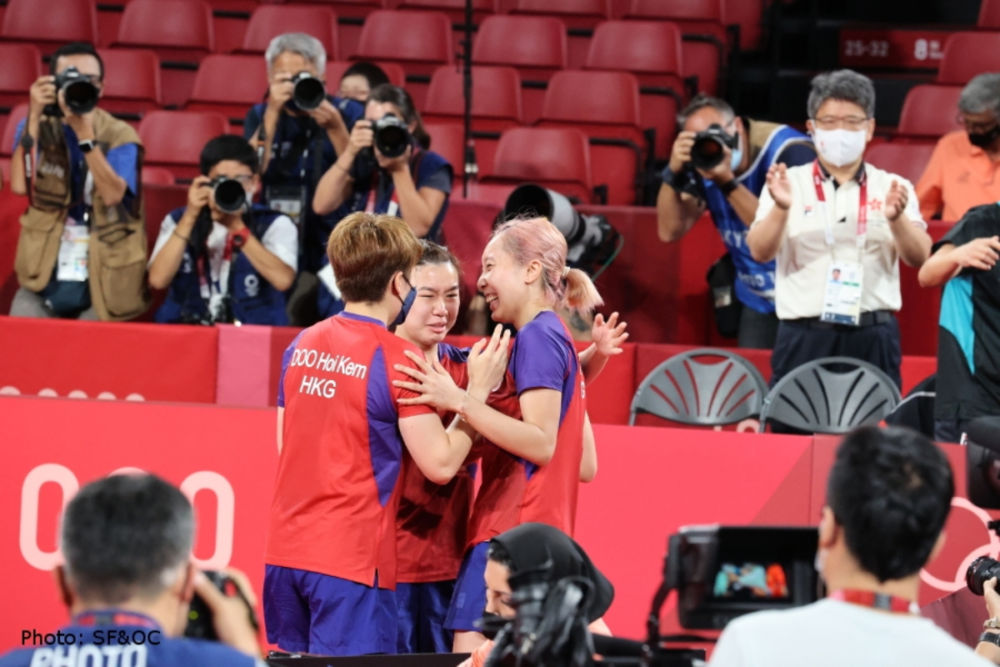 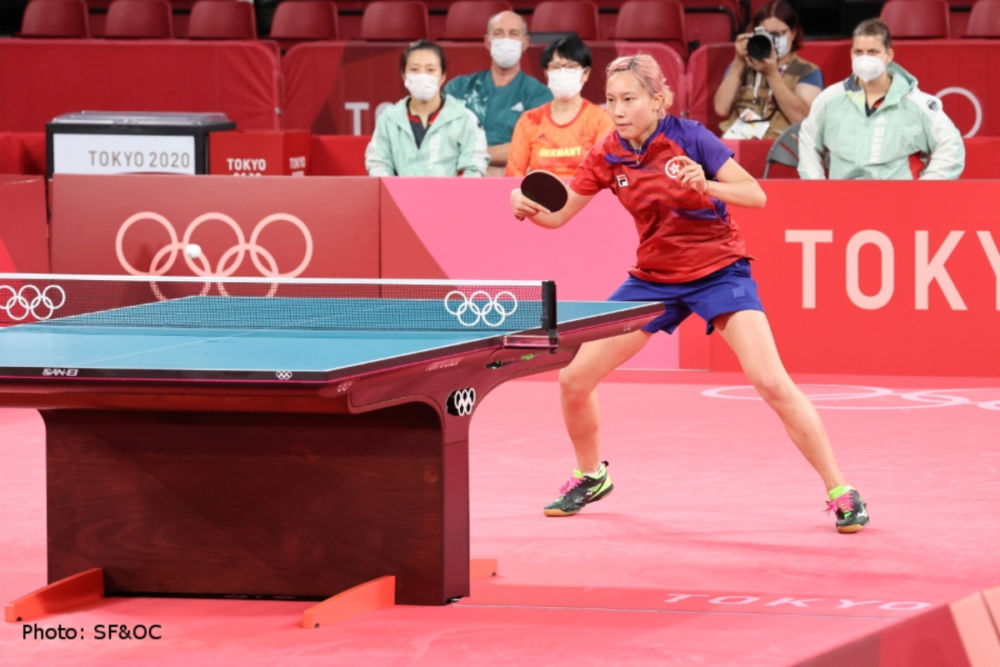 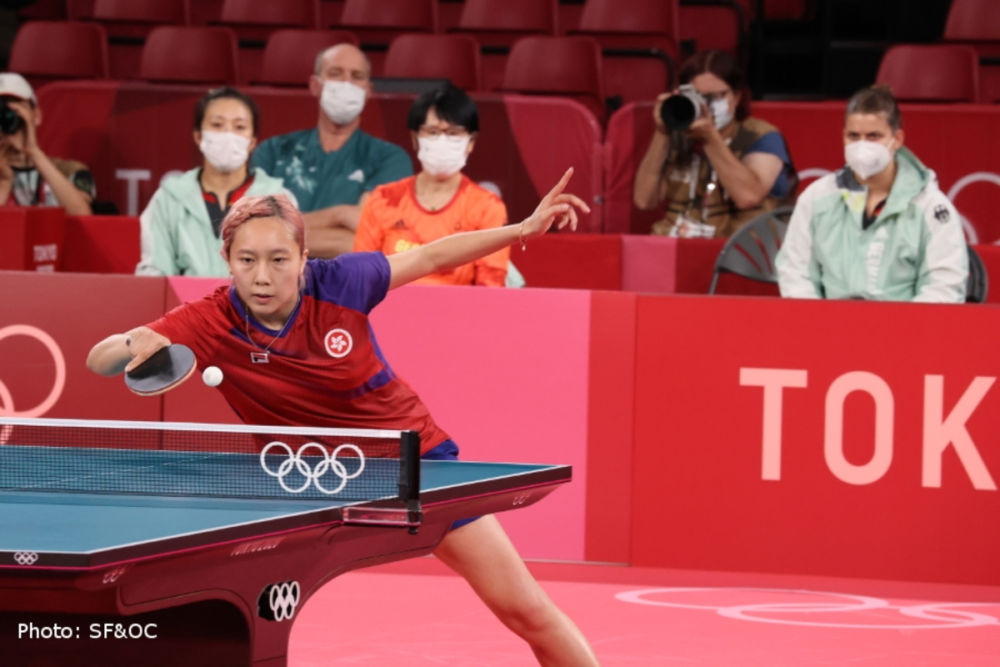 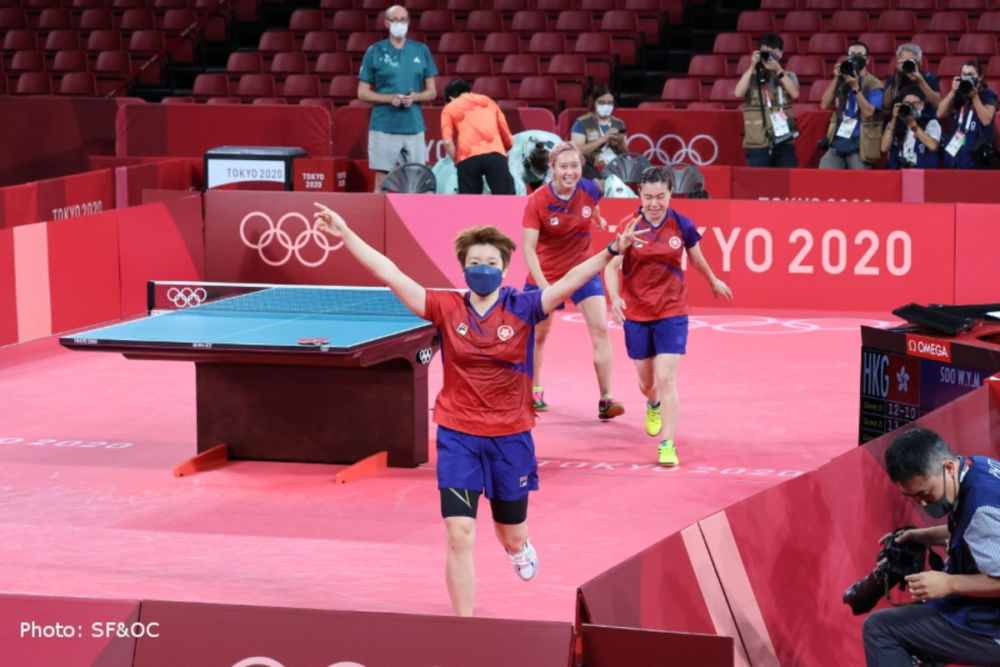 To us, their results show the strength and talent contained in our small city—that “Hong Kong athletes are not rubbish,” as our windsurfing Olympic champion Lee Lai-shan once said after her own 1996 win—but what does this victory mean to these three athletes?

After countless hours of training and nine years since her Olympic debut in 2012, 28-year-old Lee Ho-ching expressed her delight in finally bringing home an Olympic medal. She also thanked her parents for supporting her table tennis dreams while acknowledging the difficulty of leaving school to become a full-time athlete. She hopes that Hong Kong’s series of triumphs at the Tokyo Olympics can stand as proof to young and aspiring athletes that the path of “going pro” is worth taking.

In the post-match interview, 24-year-old Doo Hoi-kem first expressed her awe in her teammates, then thanked Hongkongers everywhere for all their support and encouragement prior to the matches. She described the whole journey—from the mixed doubles match to the women’s team matches—as one full of ups and downs, one that has taught her a lot of valuable lessons. 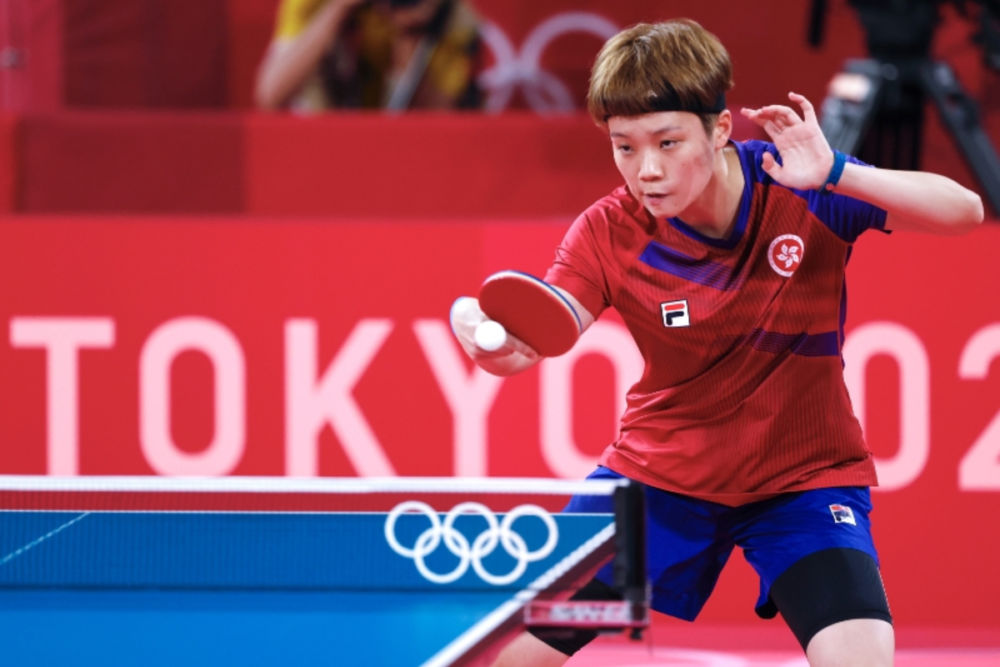 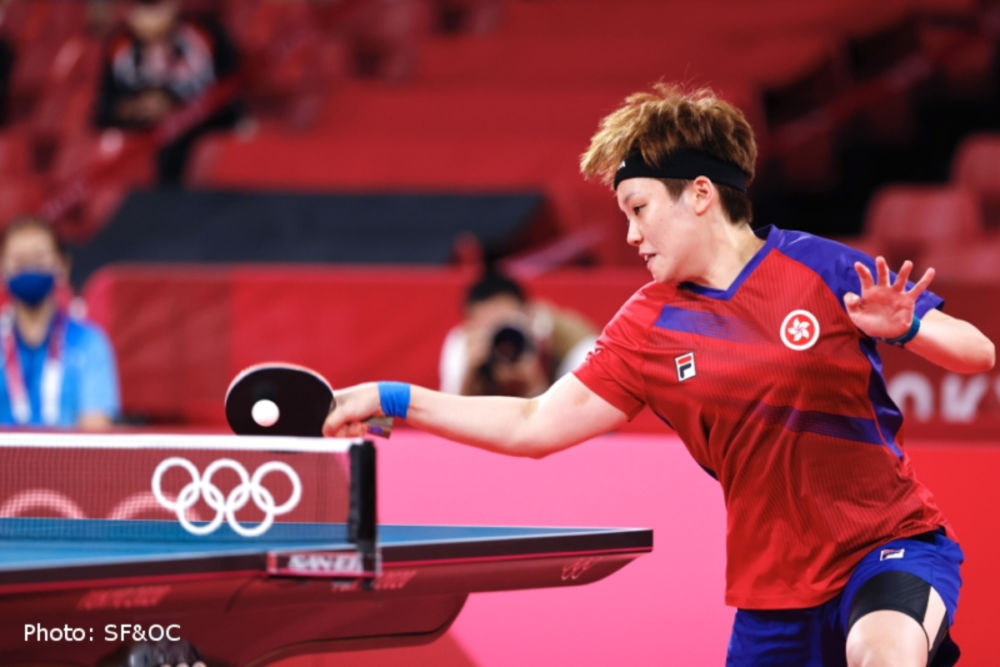 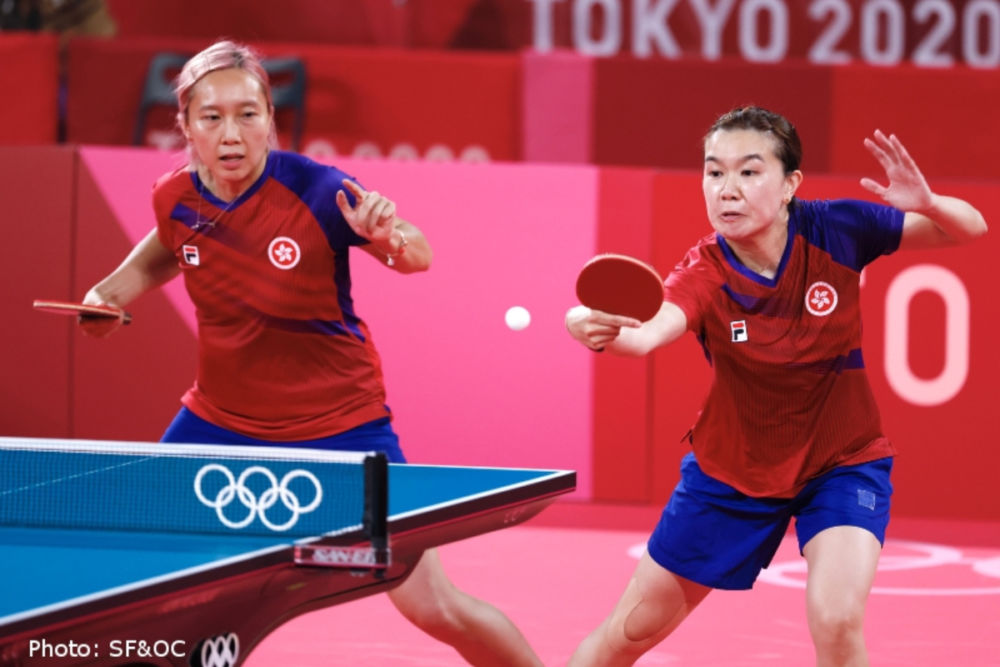 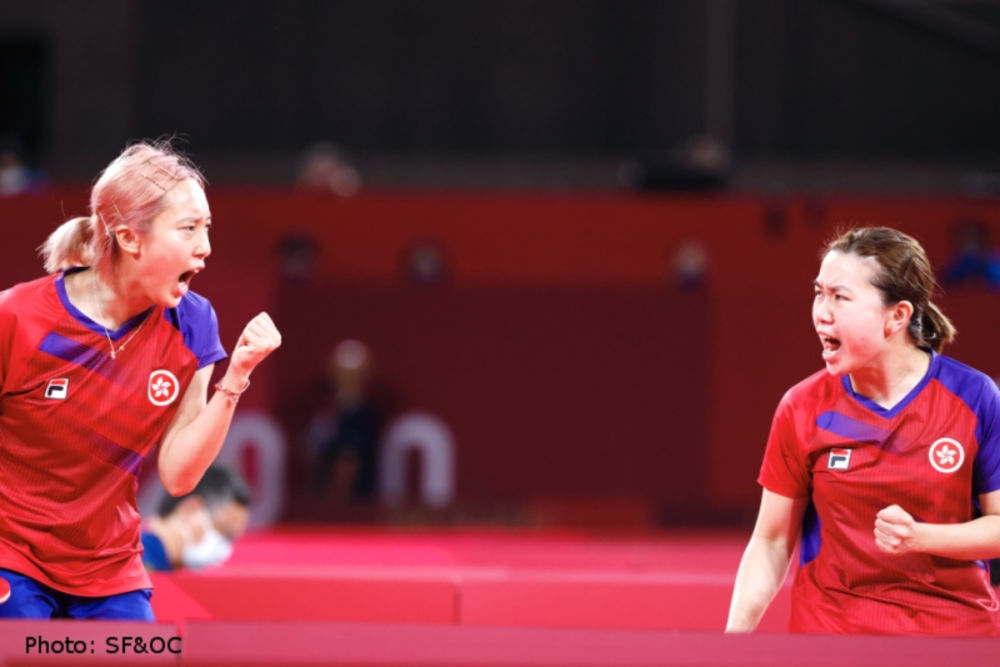 Now hailed by Hongkongers as the surprise MVP (most valuable player) of the bronze medal match, 23-year-old Soo was surprised at her own ability to win two matches for Hong Kong—she recalled losing to Shan and Han from the German team by a rather wide margin in previous tournaments.

Soo sincerely hoped that their team’s victory could encourage other athletes to continue pushing on, as their chance will come eventually, just as this chance has come to Hong Kong.

On such a prestigious and competitive world stage as the Olympics, every athlete’s appearance and each of their medals are testaments to their dedication, sacrifice, and passion for their sport. With or without a podium finish, they have already earned our admiration and utmost respect. 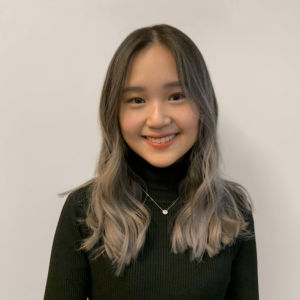