By brian_adams 19 August 2014
share:
The news was posted on a blog and a press release was issued without the usual fanfare of a press conference, making the launch of UberTAXI one of Hong Kong’s more subtle announcements in a week leading up to political marches and protests. Road closures and the general chaos that comes with a Hong Kong political rally was an ambitious weekend to launch a new service that is so heavily reliant on passable roads. 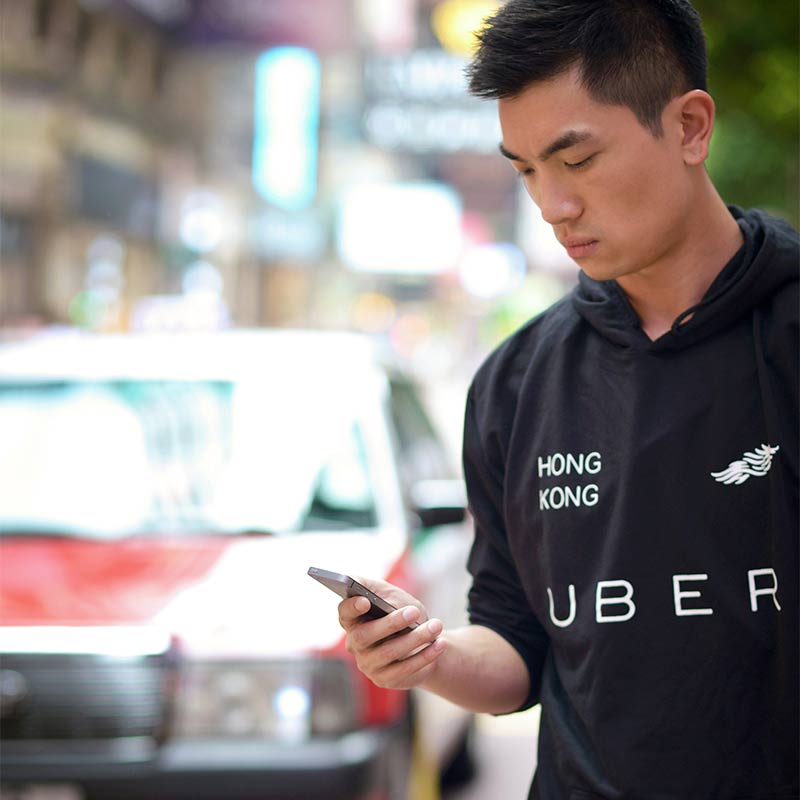 Challenges are nothing new for Sam Gellman, the manager behind Uber Hong Kong. His postings for the San Francisco based company read like a Joseph Conrad novel. A 2004 graduate of Stanford University and Goldman Sachs veteran, Gellman has been kept busy by Uber, opening the company’s international headquarters in Amsterdam, leading the London launch, and becoming Head of Asia Expansion in 2013, initially launching operations in Singapore and 25 additional locations, including within Japan and New Zealand. The media was offered the chance to speak with Gellman when UberTAXI launched last Thursday using an online scheduling app, which showed he had been speaking one-on-one with the press for most of the morning and afternoon. In a small conference room in Two Exchange Square, sits Gellman, quick with a handshake and a wide smile. Gellman conveys all of the confidence of a man who has seen the world and is trying to get it in his car. He also appears tired, drawn by controversies from taxi driver protests abroad to the latest decision by the German courts to ban the app in Berlin. Once seated behind the conference table, leaning forward on his elbows, surrounded by toy red taxis covered with Uber stickers, Gellman measures his words as if considering how they might be misinterpreted. Media coverage has been contentious at times Gellman says, with reports citing online sources, and reporters never experiencing the service firsthand. However, for Uber-veteran Gellman, this appears to be just another roll out. “When we put cars on the road it’s anyone’s guess what’s going to happen.” 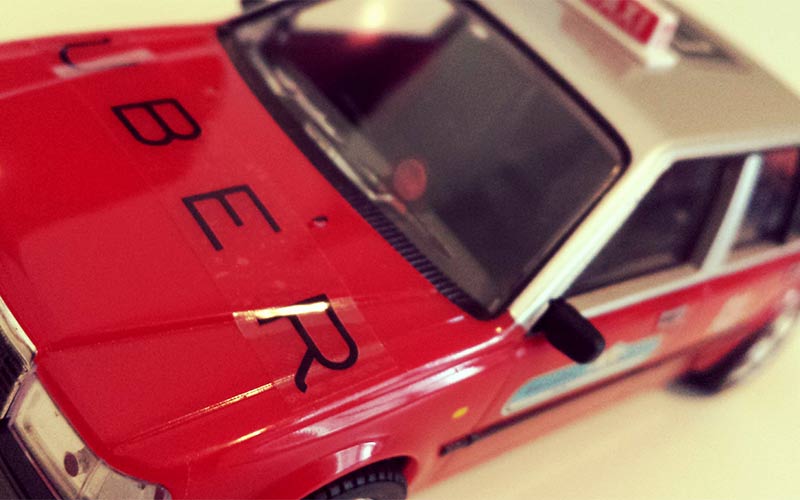 The coolness in his voice comes from experience, the predictable cycle of naysayers, followed by a few disruptive hurdles, and eventually widespread adoption. Acceptance is inevitable according to Gellman, who pulls up a graph marking Hong Kong as the fastest growing Uber market in the company’s short history outside on any United States based roll out. However, this is where covering Uber runs in to an issue: the numbers. The graph on Gellman’s laptop has no numbers, in essence a diagram any CEO would kill for, filled with multi-colored lines, all snaking upwards and to the right. Numbers are something Uber does not share according to Gellman, not the number of users, the number of taxis participating, or the revenue generated. For UberTAXI the secrecy cuts both ways. Uber has decided not to charge a fee for taxi use, removing the revenue stream from the conversation. Gellman is also quick to highlight that taxi drivers want to sign up faster than Uber can bring them on. However, when Localiiz staff asked its Facebook followers about their UberTAXI experiences this weekend, the majority cited a lack of taxis over the weekend (although it should be noted several respondents praised the new service, one even mentioning it was a “God send”). 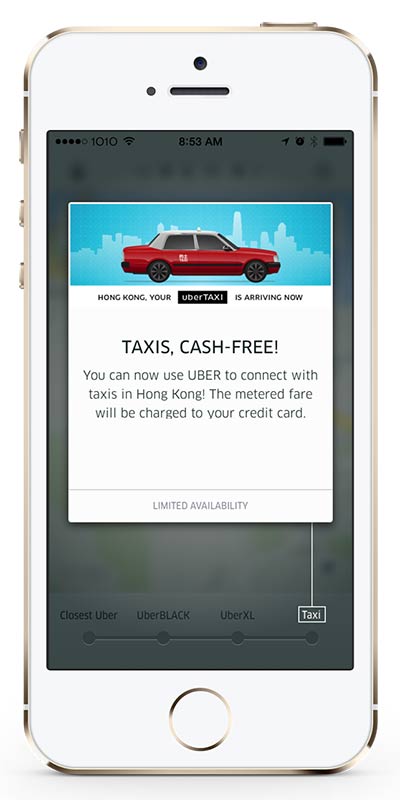 So how does Uber profit from a partnership with taxi drivers? Alignment. “This business only does well if we are true to the local culture of the city we are in. Being local is core to what Uber is. Working with taxis is a real statement about that.” Gellman has a feel for Hong Kong, having lived here for eight years. He believes the opportunity for Uber in the city is “enormous” given the supply of taxis and the demand by passengers, although it could be better organized. “One of the problems…is that taxis seem to be oversupplied during some hours and undersupplied during others.” The prospects for the drivers are also considerable according to Gellman. As drivers agree to work with UberTAXI they are told the company can deliver passengers “when they want them where they want them.”

UberTAXI’s promise of providing taxis at the push of a button for riders is appealing, especially in a city where couples are often seen on opposite sides of the street competing with countless others for an air-conditioned ride Gellman said. As rider feedback rolls in (the app offers direct feedback that the Uber team reviews), Gellman takes it in stride, keeping a broad perspective to the overall business model. “It’s a people to people business. Two people finding each other in a crowded city.” My experience with Uber began once I left the interview with Gellman. Standing outside of Jardine House I set up a Hong Kong account, previously being a user in San Francisco, scheduled a pick up and…nothing. Chalking it up to user error I attempted once again to schedule a ride and…nothing. The third time, as they say, was the charm and I booked a driver, although the estimated distance quickly changed from 6 minutes to 14 minutes and he appeared to be somewhere along Caine Road. I cancelled soon after and was promptly sent a bill, thanking me for using Uber (HKD22) along with a cancellation fee (HKD10), promised to anyone who cancels after 5 minutes of making a booking. 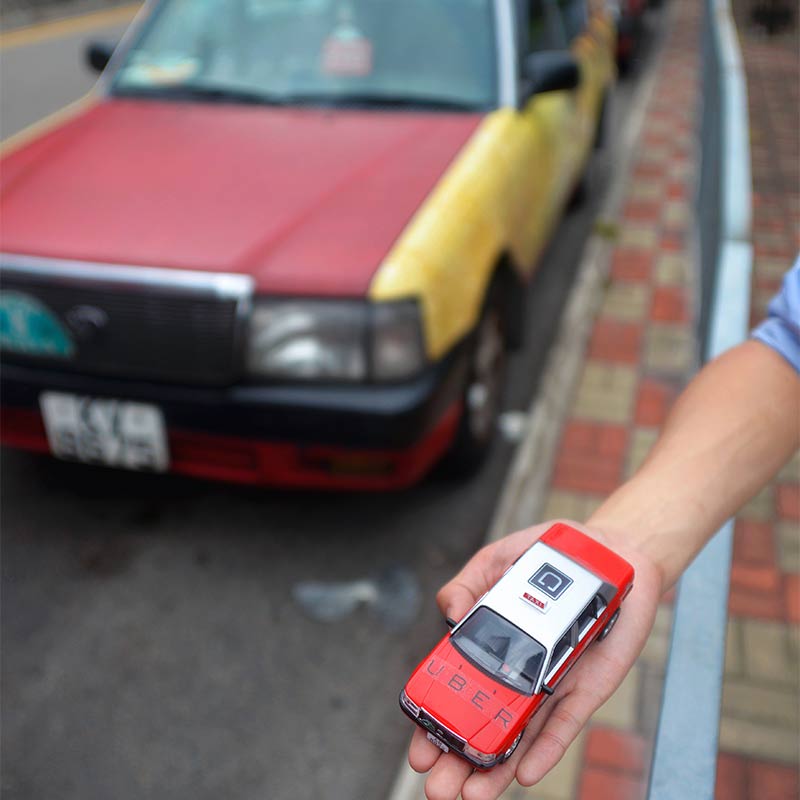 While my tweet to @Uber went unanswered all weekend my tweet to @Uber_HK was swiftly answered on Monday and a personal email was sent notifying me that the charge would be dropped since I cancelled prior to 5 minutes after booking. I was also notified that my account now has an additional HKD100 Uber credit. “You deserve a better and more consistent level of service from Uber. I hope you give Uber another chance – I’m confident your next ride will be better,” read the message from Uber’s Hong Kong Community Manager Justin Ng. A day later Gellman says UberTAXI helped reunite three phones with customers who left them in the taxis over the weekend. It appears that Gellman’s words prove to be true – it’s a people to people business. Got anything cool you'd like Localiiz to share? Send us your stuff!