The azure waters of Okinawa, which stretch into the horizon until the water appears to meet the sky, mesmerise me as I greet the dawn on this stunning island in Japan. If you have ever wished for the orderliness of Japan combined with the laidback vibe of a tropical island, this is it. Select any of the 160 subtropical islands which make up the archipelago—each is an underwater playground for snorkelers and scuba divers.

Okinawa may be better known around the world for the longevity of its elderly population, as well as for the Battle of Okinawa in the Second World War, but the islands are also a wonderful beach escape steeped in a culture unlike the rest of Japan. It’s not surprising considering this southernmost prefecture in the East China Sea lies closer to Taiwan than Japan.

Once an autonomous kingdom known as Ryukyu before its annexation in 1879, Okinawans have their own language, cuisine, traditions and most attractive of all, their easy-going personality. Read on for the best things to do on the island nation.

Except for the capital Naha where getting around is easy, exploring the main island of Okinawa by public transport is not as seamless as on the mainland. Therefore, many visitors choose to rent a car. As for where the best beaches are, local advice is to head northwards from the capital Naha along the stretch between Onna and Cape Hedo on the west coast. Not surprisingly, many of the best beach resorts can be found here. The coastal scene is dramatic indeed, carved out into capes and coves, some backdropped with cliffs. 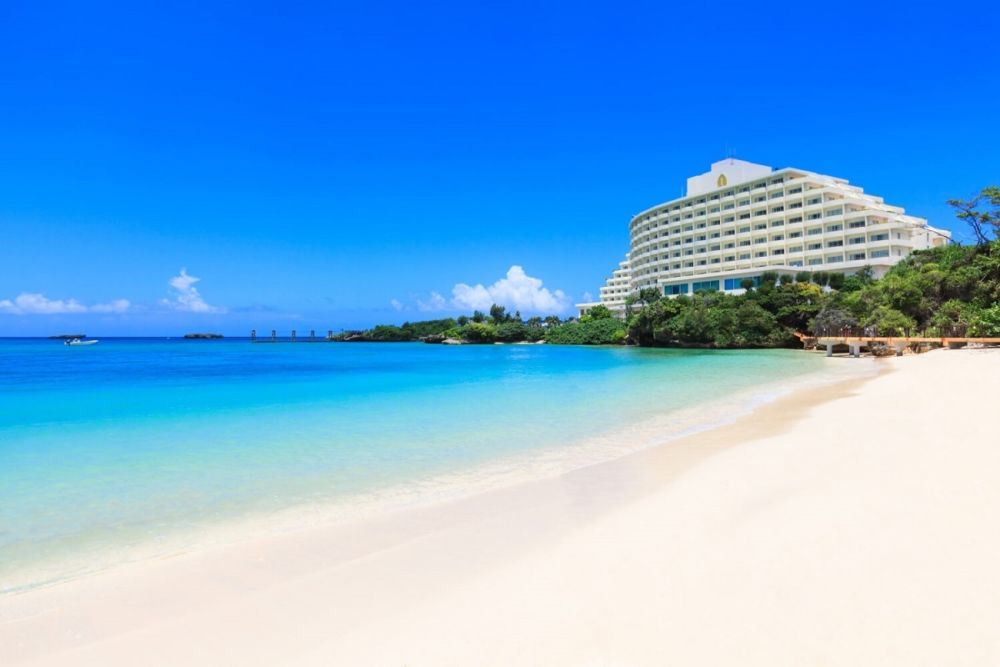 A top pick is Manza Beach for its clear blue water, soft sand, and excellent facilities. Most beaches in Okinawa are equipped with facilities (showers, restrooms, changing rooms, eateries, gear rental) and activities, some requiring an entry and/or parking fee. But Manza’s other appeal is a “submarine” exploration activity which is operated by ANA Intercontinental Manza Beach Resort. This resort is in one of the best locations on the island, flanked by Manza beach and near the famous Cape Manzamo. Whether as a hotel guest or visitor, head for its impressive Club Lounge for the jaw-dropping ocean view coupled with impeccable dining. Needless to mention, the bar is top-notch.

Another favourite is Kouki beach, relatively low-key but equally stunning.

For snorkellers and divers, what distinguishes Okinawa from other island resorts around the world is that the coral reefs lie not far from the shore. Some such as at Cape Maeda (over 90 minutes from Naha) hugs the coast. Here, you can have a good view of the reef as it’s visible from the cliff above the cape. So, it’s a must-stop even for non-divers. 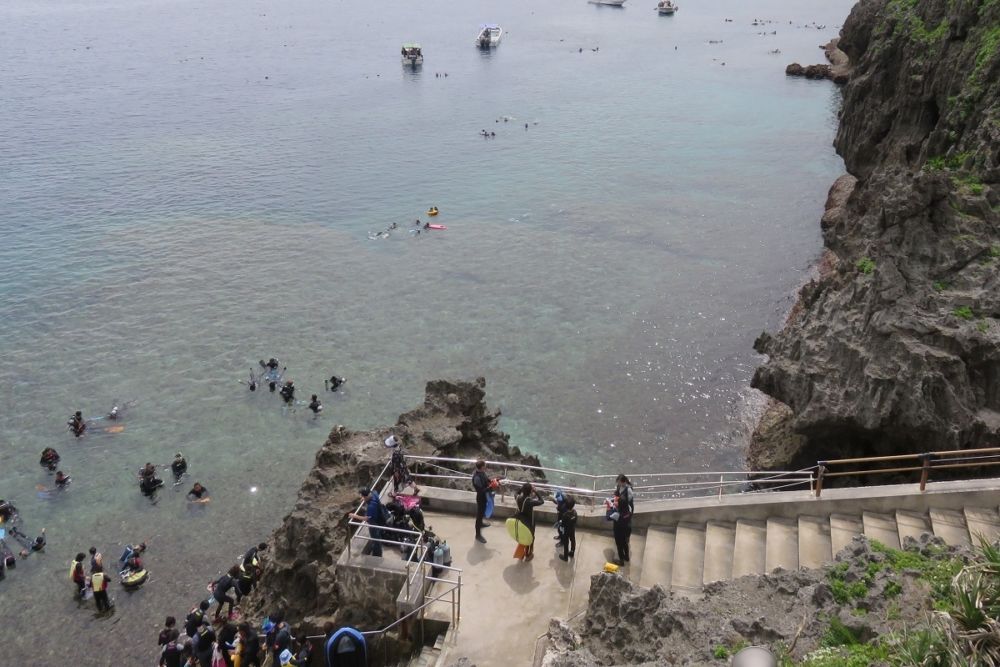 Cape Maeda boasts a highly popular diving spot, the Blue Cave. The underwater cavern is a marvel for divers and snorkellers alike, who are drawn to the shafts of luminous blue light emanating from the sunlight reflecting off the white seafloor. 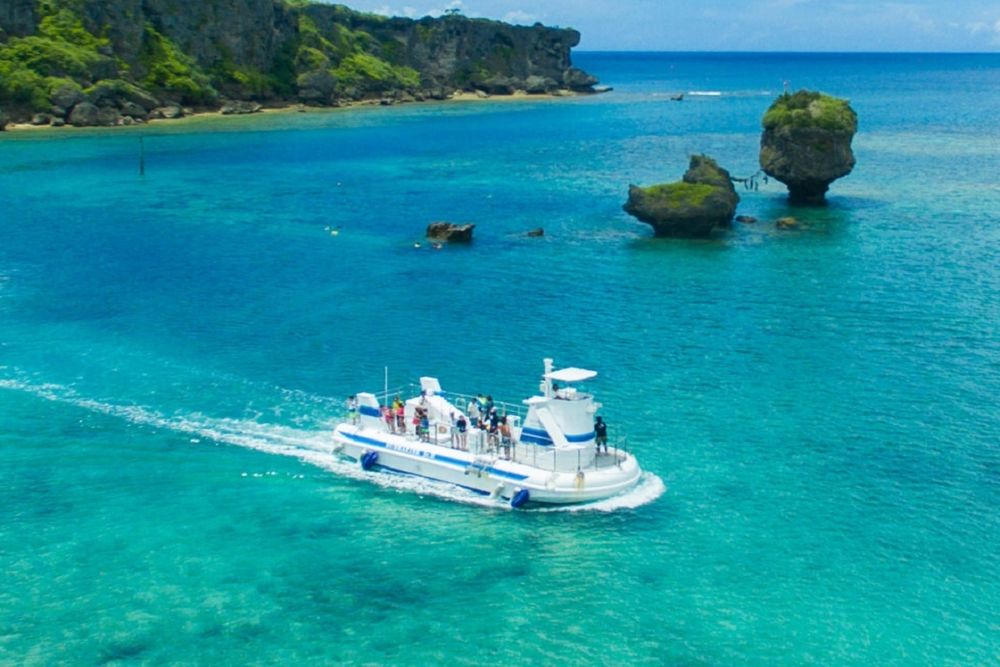 There is another way to take in the underwater delights without getting wet. At Manza beach, you can join a coral conservation tour in an underwater observation boat, Submarine Jr. II, which explores not only the coral farms but also the reefs off the famous Cape Manzamo. The observation room is located below deck, lined with wide windows on both sides of the hull. Unlike a glass-bottom boat, peering through the windows while seated upright is less dizzying. 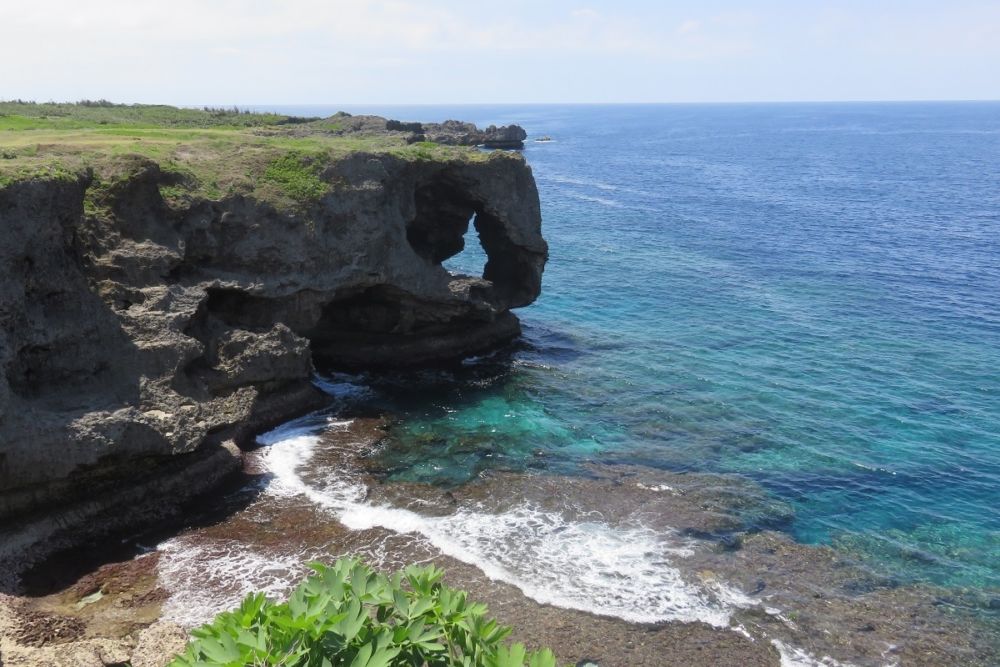 As the tour draws to an end, passengers are ushered onto the outdoor deck where we get a good view of Cape Manzamo’s iconic elephant trunk-like natural rock formation. For a closer look at Cape Manzamo, most head to a nearby viewing platform on the cliff.

Japan: Around the country in ryokans 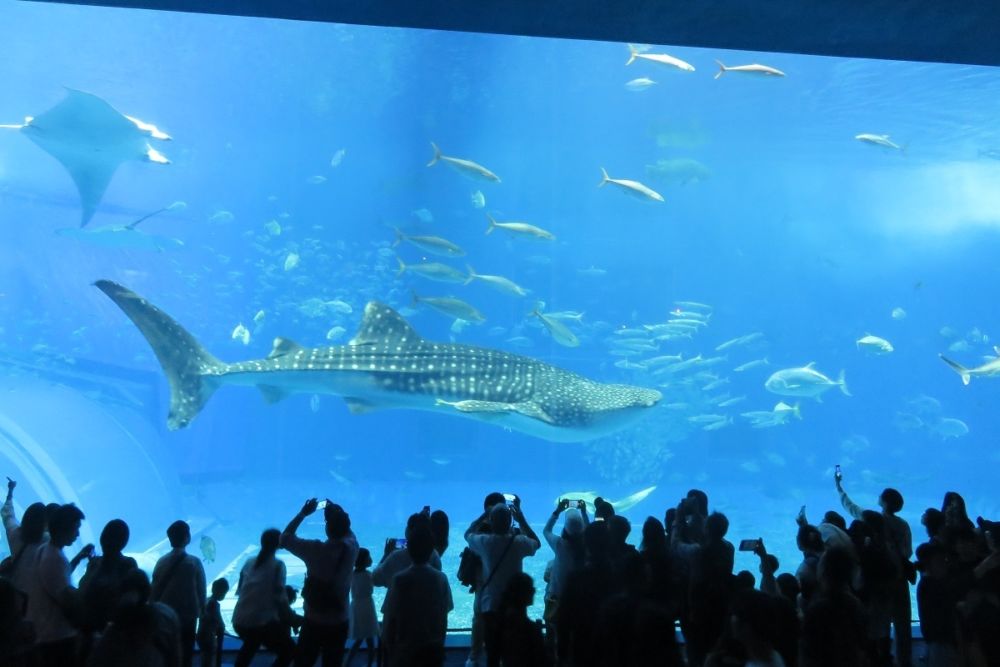 While some may not fancy touring an aquarium, Okinawa’s Churaumi Aquarium is worth a visit for its impressive whale sharks and manta rays. This place deserves a full day as the collection of creatures is amazing, especially the two graceful giants which can be viewed from all three different angles provided, from the main viewing section, under a glass dome, and while dining at the Ocean Blue Café.

Beyond independent touring, interacting with locals adds more depth to the travel experience. As English is not widely spoken here, participating in a home visit programme is both helpful and insightful. The township of Yomitan runs a community-based meet-the-locals programme which involves residents hosting tourists for either a half-day home visit or providing homestays lasting two or three nights.

My afternoon home visit is spent with Hiromitsu and Keiko Teruya who share their time and a home-cooked meal. While Hiromitsu works on the family’s sugar cane field, gregarious Keiko minds the home in between other roles as taiko drum teacher and dancer. Her impressive talent ranges from flamenco to the art of mask changing. 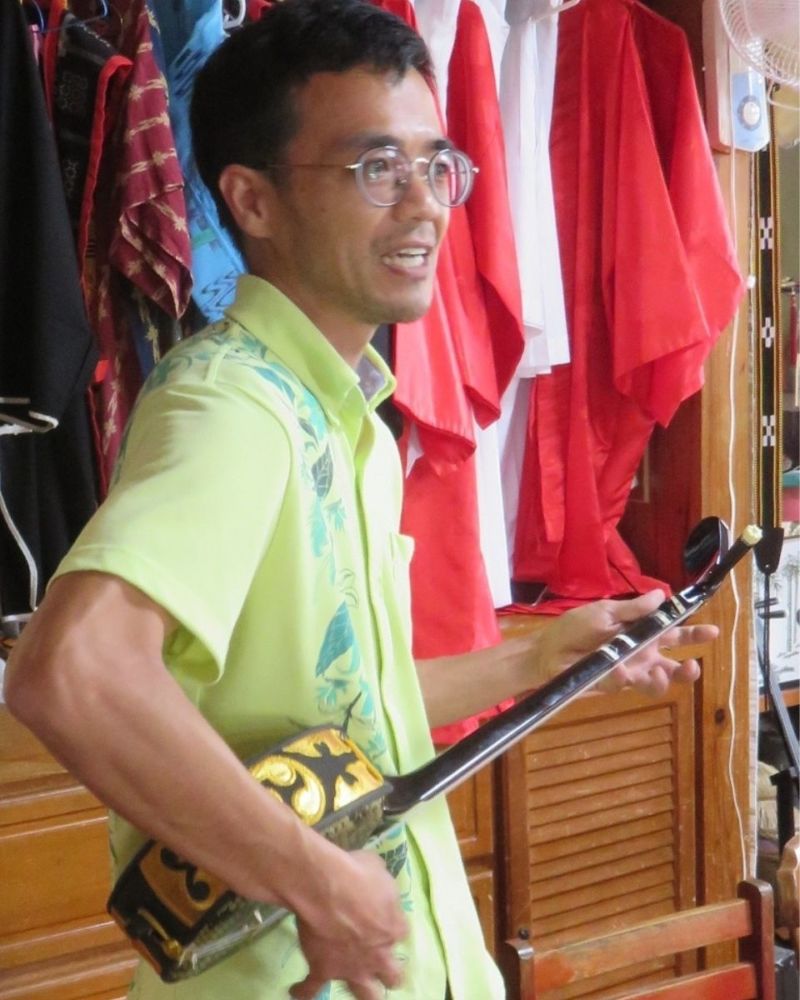 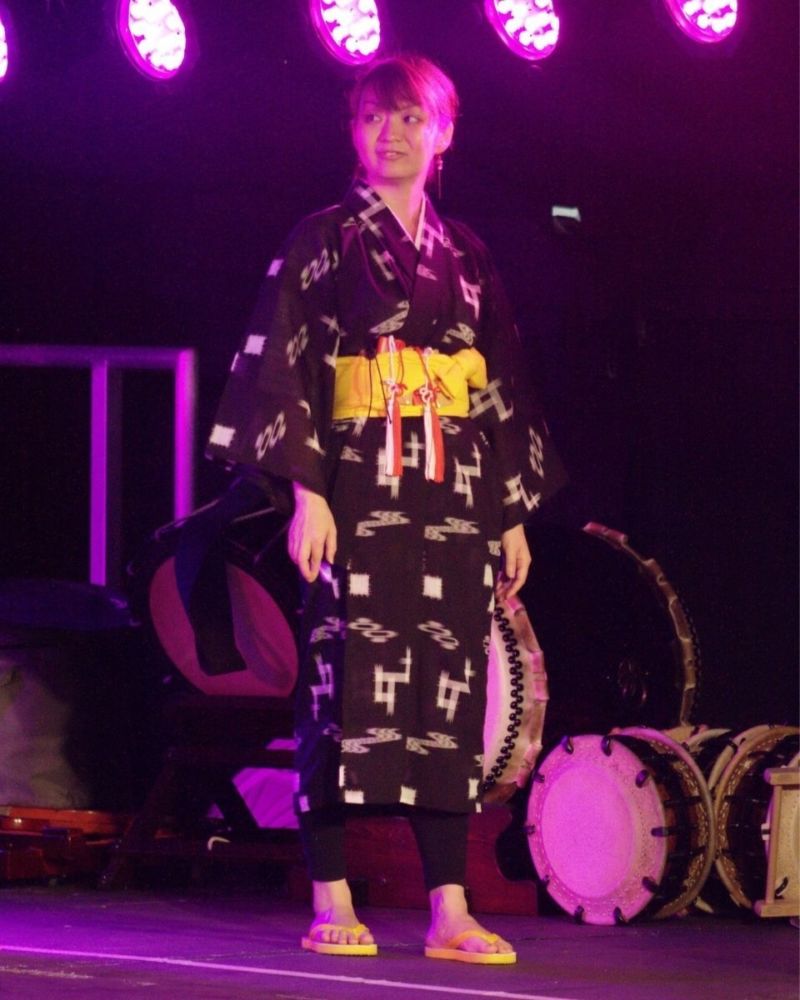 As Keiko explains the wealth of Okinawan culture, she also points out some Chinese influence reflected in the local traditions. For example, the traditional dress, ryusou (琉装), blends the Chinese hanfu (漢服) and Japanese kimono (和服), awash in vivid colours of the tropics. As with the three-stringed instrument, sanshin (三線; three-strings), which is similar to the Chinese erhu (二胡).

Chinese architectural style is reflected in their ancient castles, in which red is the dominant colour while dragon sculptures and paintings adorn walls and pillars. Shuri Castle is the most prominent palace which reflects this style. Unfortunately, a blaze caused massive damage to this world heritage site last year and now only a small part of it is open to visitors. 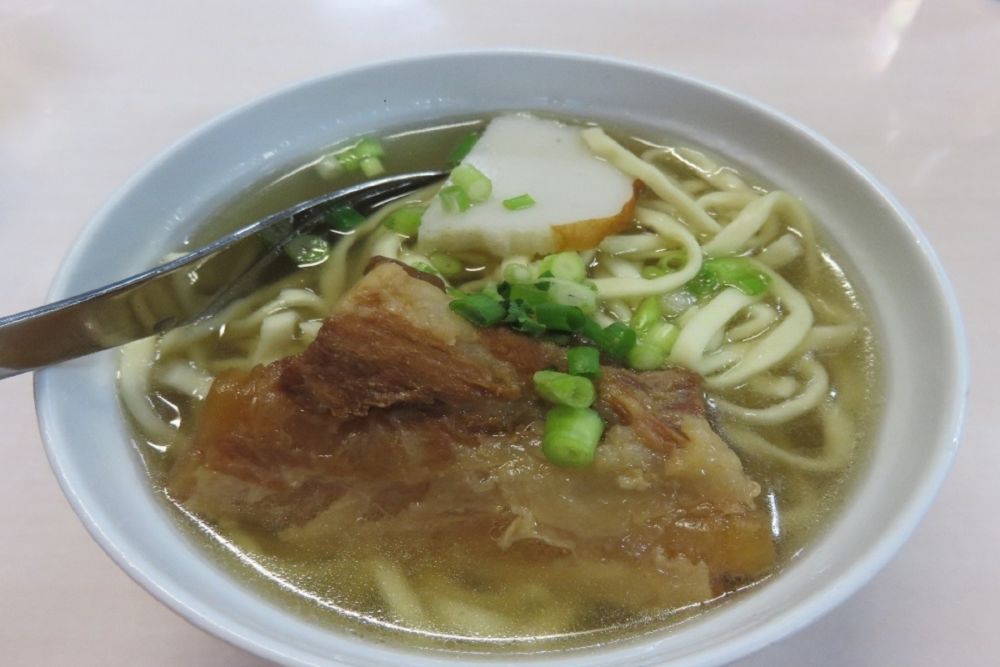 Those who are not fans of soba should give Okinawa version a try as it’s the complete opposite to the standard fare. Here, soba is served in clear, hot soup. The chewy noodle is made from wheat as opposed to buckwheat. 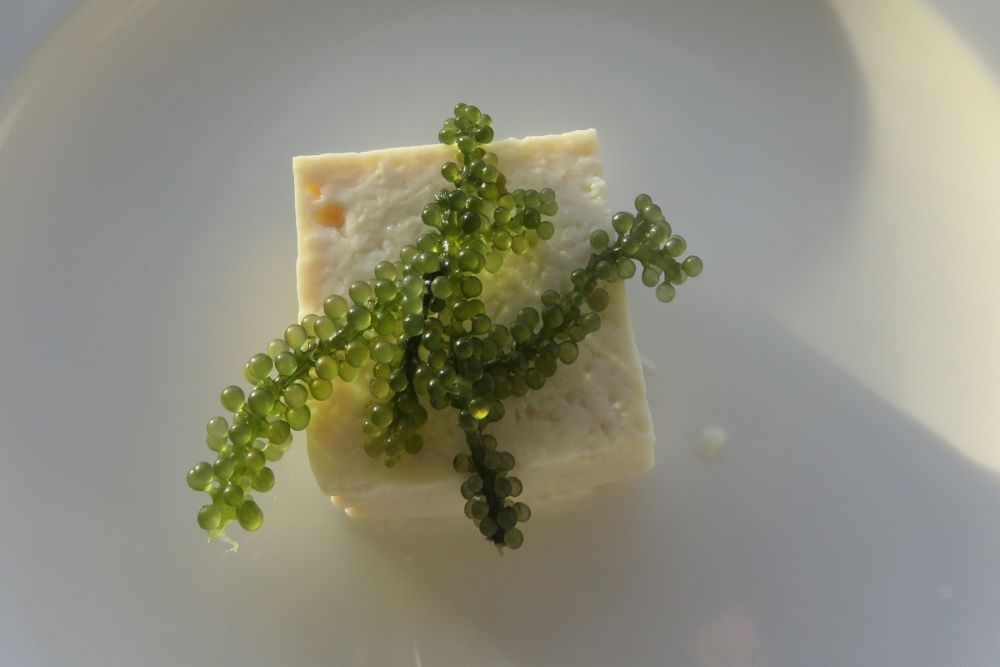 If you think that’s already quite a contrast, wait till you try goat meat sashimi—gamey yet tender, and served partly frozen to drown the strong smell. Even its seaweed is unlike any other. Aptly nicknamed sea grapes, these bright green bunches of intrigue are strung out along caviar-like pods. The tendency is to eat these slowly, biting into each pod to release an umami bomb much like seawater. 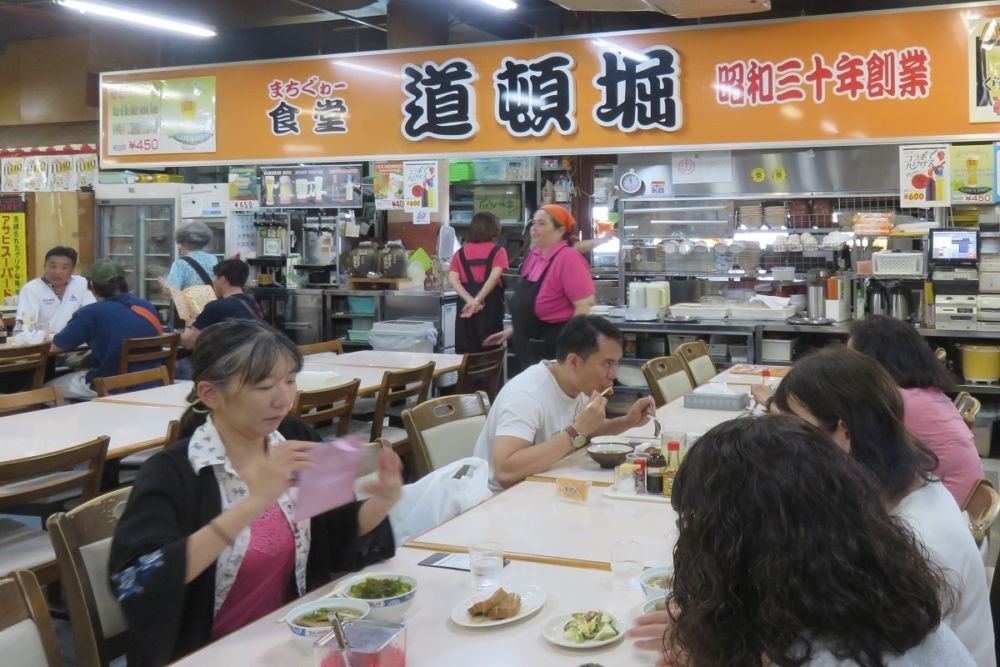 The food court at Makishi market in downtown Naha makes a great one-stop place for a variety of authentic local delights. Elsewhere, Okinawa is filled with small owner-operated eateries with ambience ranging from quaint to trendy. 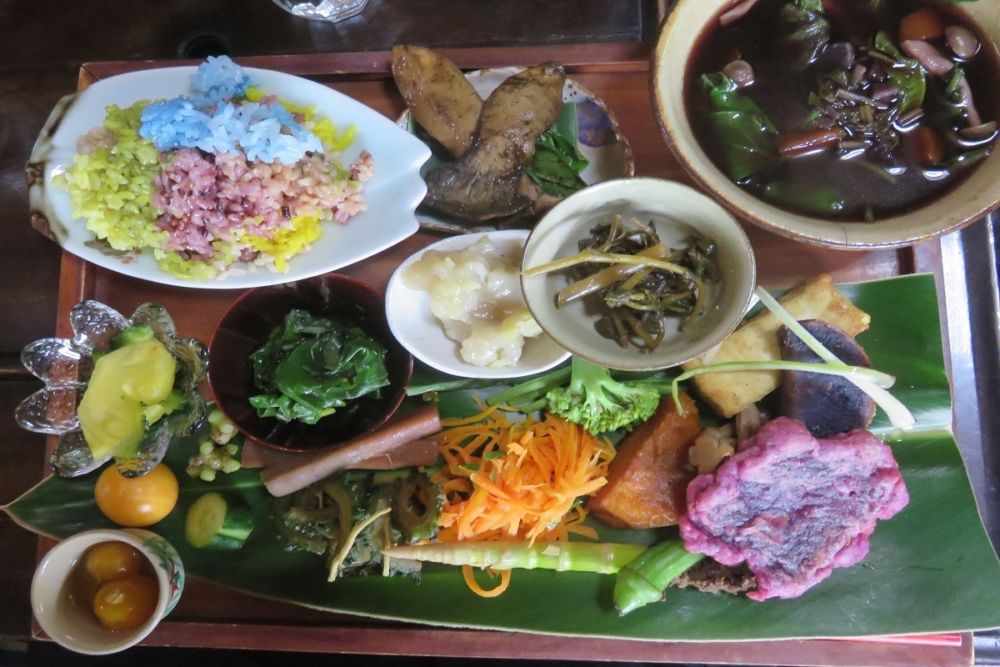 Café Garamanjyaku is a standout for its rustic Okinawan charm as well as its healthy wholesome food. Dine in a traditional setting in a small wooden house snuggled amid a lush garden. The venue, tucked in a residential area in Kin on the east coast, belongs to chef Kiyoko Yamashiro who is usually on-site and happily mingles with patrons. Her cuisine blends traditional Okinawan and macrobiotic food using locally grown vegetables, including medicinal herbs and wildflowers harvested from her garden and other farms. About 20 set meals are prepared daily, each comprising miso soup, seasonal vegetables and fruit, restricted amounts of meat, along with a fruit-veggie mix juice. 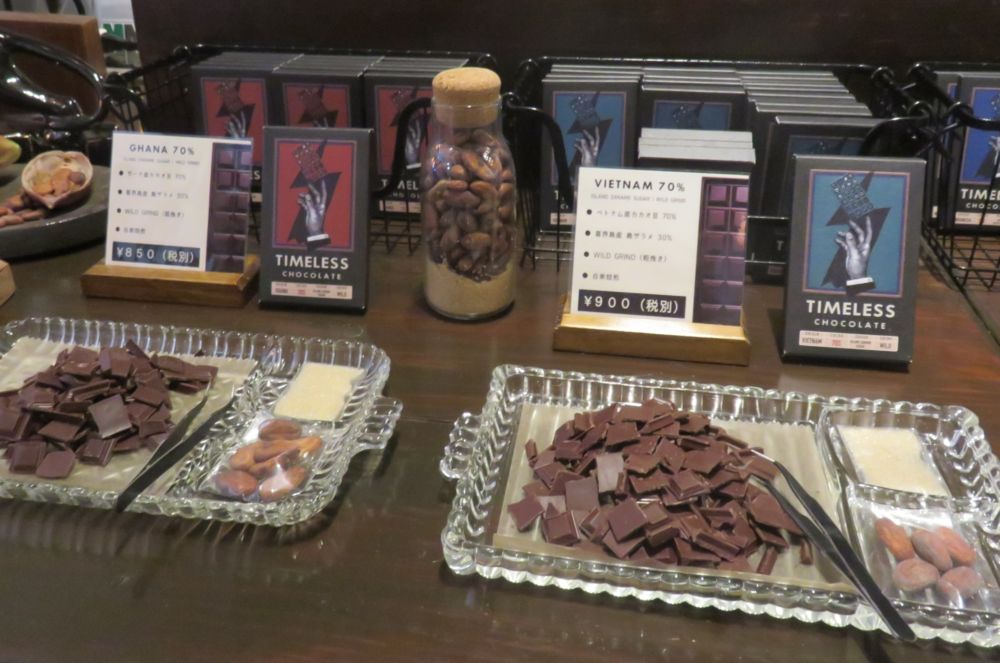 When in the mood for a trendy yet artisanal treat, head for Chatan town to Timeless Chocolate, a bean-to-bar speciality chocolate cafe located within the American Village leisure complex. The main draw is not only the additive-free chocolate creations but also the pairing of local cane sugar (sourced directly from farmers) with different imported organic cacao beans. Okinawan sugar is distinct for its salty flavour—a result of the soil’s high mineral content. The industrial-style space has a youngish easy-going vibe, but what sets it apart is the tasting corner.

Customers are free to explore the taste, texture, and aroma of a variety of chocolate matched with different cane sugar combinations. Its most premium chocolate uses sugar from a single cane plantation, thus availability is seasonal and in limited supply. 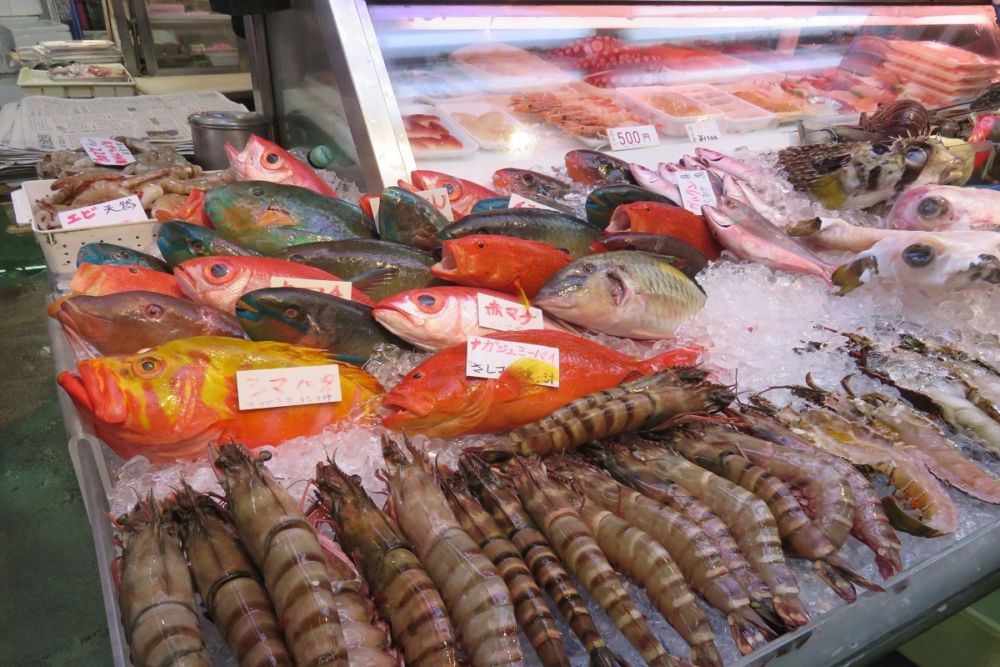 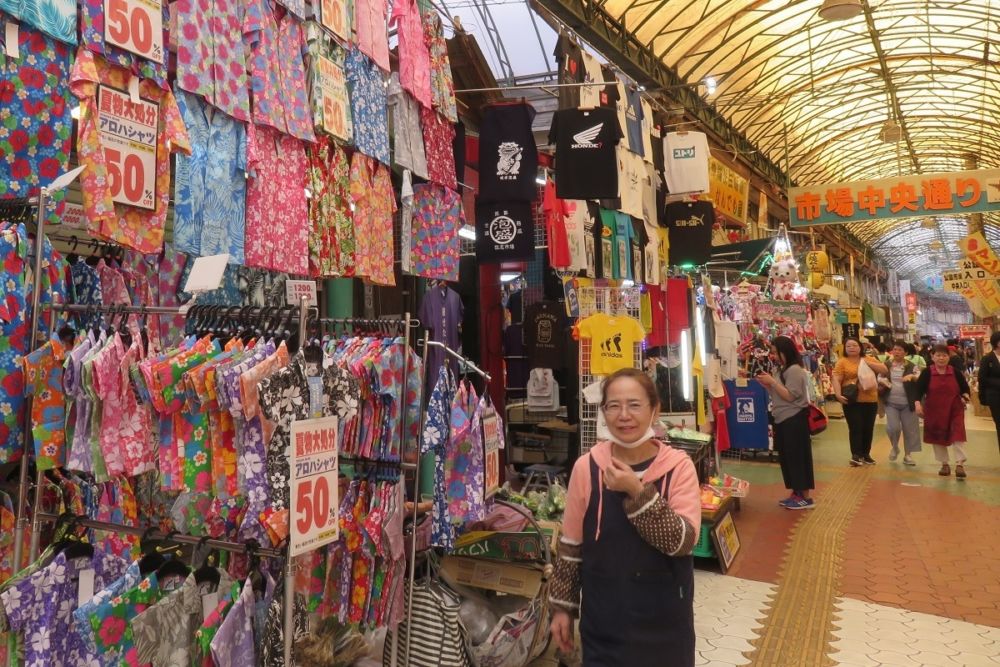 Makishi Public Market is a good starting point to observe the bustle of local life. The lively marketplace is wonderful for browsing for anything from perishables (the technicolour parrotfish is very eye-catching) to clothing—there’s a local version of the colourful Hawaiian shirts called Kariyushi (かりゆしウ).

Karuizawa, Japan: Where the wild things are 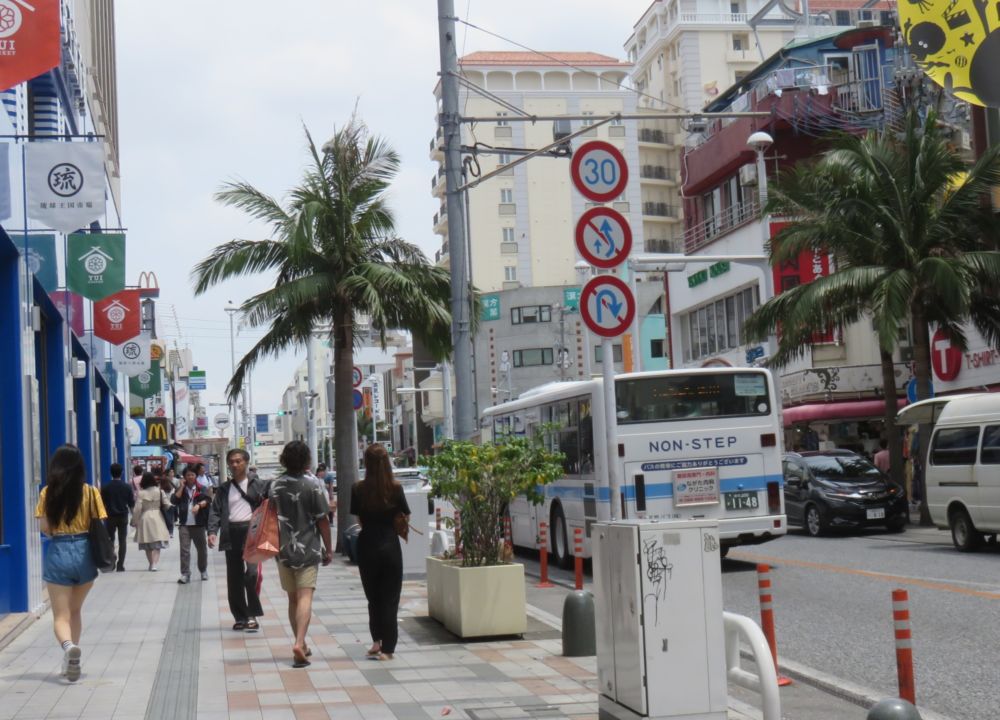 Many tourists also gravitate towards Kokusai Street, a dining and shopping strip not far from Makishi. 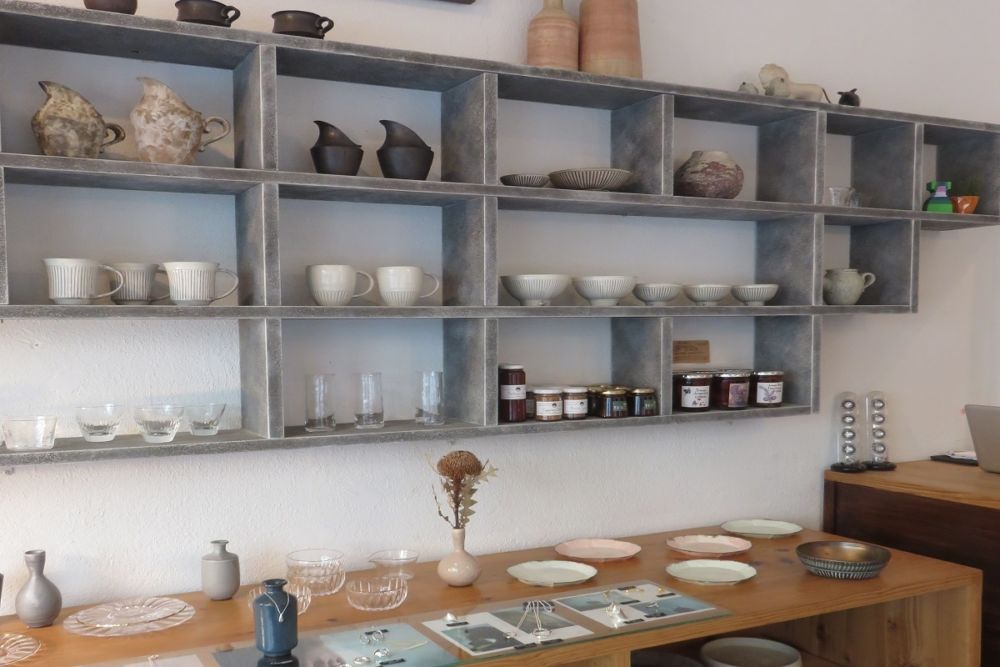 Those looking for handmade pottery and ceramics can head to Yachimun Street, the birthplace of Okinawan earthenware, lined with shops and art studios. Among them is a sprinkling of modern pottery boutiques such as Garb Domingo, which sells one-off artistic pieces. The outlet retails stylish, contemporary wares and art pieces by young designers. 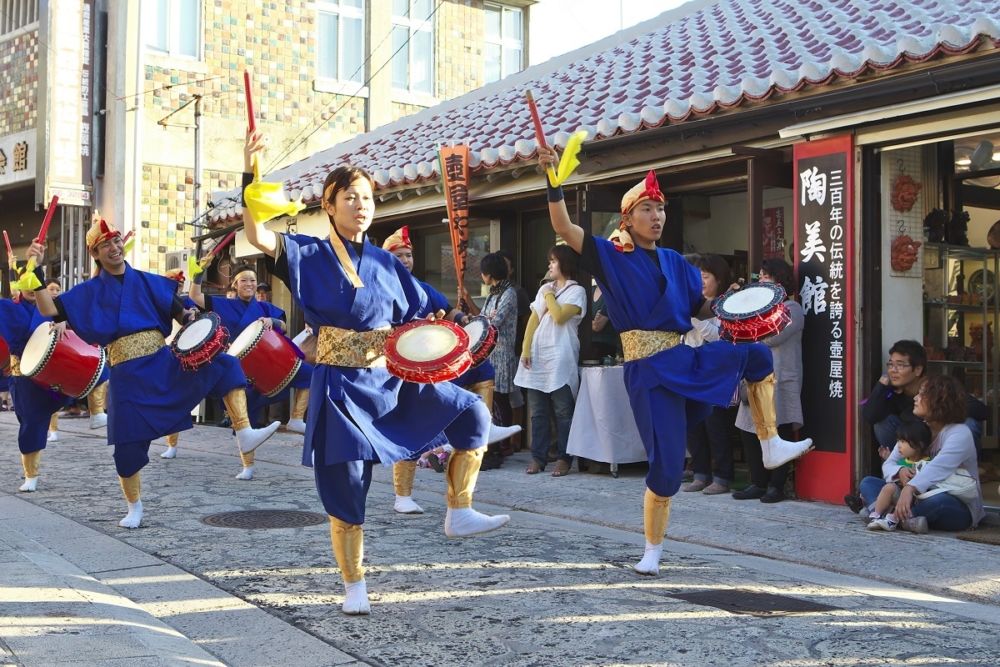 If time permits, get into the beat of Okinawa with an energetic drum and dance performance called Eisa. Visit between June and August during the Eisa festival period when the atmosphere reverberates with taiko drums (太鼓) and sanshin. Though my visit did not coincide with the festive months, I managed to catch one show on my final night’s stay at ANA Intercontinental Manza Beach Resort. Thankfully, the resort offers a nightly in-house traditional show incorporating Eisa and other folk dances—an upbeat way to wrap up a trip. 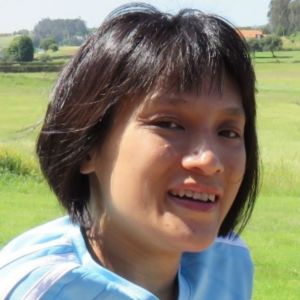 Angela is a travel writer with a penchant for spas, safaris, and trekking. A former news journalist who covered global political affairs, she now traverses the world exploring nature’s frontiers from Patagonia to the Arctic Circle to write about experiential travel, wellness, and gastronomy.