By Localiiz 20 March 2013
share:
KELY Support Group is a non-government funded bilingual charity that provides non-judgmental and confidential support to Hong Kong youths between the ages of 14 and 24. KELY provides a wide range of programmes and services that focus on drug prevention and intervention, as well as the development of healthy self-esteem amongst youth.
Saving Our Sevens – One Youth at a Time March 28th 2013. By Crystal Wilde 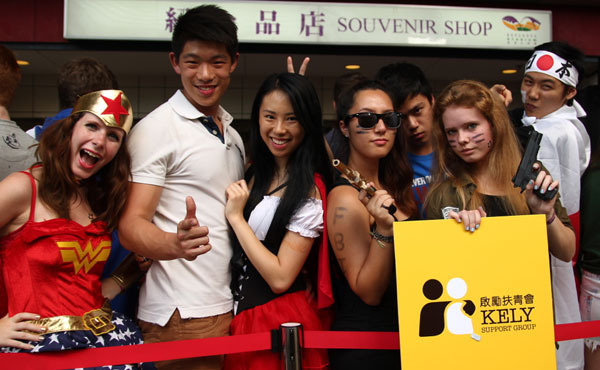 KELY estimates they reached 2,500 youths at this year's Sevens A group of young people in skin-tight, crotch-stuff leotards pound their way through a pitcher of beer and toast to the Hong Kong Sevens. Behind them sits the KELY Support Group, a non-government funded youth charity on a mission to ‘Save Our Sevens’. Approached by the Hong Kong Rugby Football Union last year to tackle youth binge drinking at the event, KELY was back with an even bigger team in 2013. Localiiz was invited to shadow the initiative to find out ‘What Really Goes On’. “We don't stop them from drinking, but we encourage them to take care of their health and know their limits,” said communications and development manager Vian Tan. “We try not to be too serious, and we don’t expect to ever encourage or discourage young people from drinking. We just let them know we’re here to support them when they need us and try to reduce the harm alcohol causes where possible.” And the non-aggressive approach seems to be working, as its all hugs and high-fives as the KELY team emerges from the briefing tent to greet their subjects. “They saved me last year,” one of the scantily clad young men tells Localiiz. “KELY was there for me in my couple of hours of need at Sevens 2012. I got plastered and have no idea how I even made it to their tent. It gets crazy here and you need them. I would have been in hospital otherwise.” This year, only two young Sevens spectators were hospitalised, but KELY estimates that it played big sister to around 50 seriously squiffy young people, handing out barf bags, holding back hair and hailing taxis home on every night of the tournament. “It was generally in the late afternoons that we started seeing people coming in quite drunk and dehydrated,” said programme manager Sky Siu. “It was quite hot and they were buying alcohol rather than water. We actually had a larger number of youths coming to us of their own accord this year; we barely needed to go out and find them.” “We work very closely with St John’s ambulance,” Sky continued, “but we only refer our youths to them if things take a turn for the worst. The fact is that most of the youths don’t actually want to see the medic. A lot of them were afraid we were going to book them and take them to the police, but we let them know that we just wanted to make sure they were okay.” The Save Our Sevens campaign marks KELY’s second year at Asia’s biggest sporting event, with the group having made its Sevens debut in 2012 with the Don’t Wastebook Your Weekend campaign. This year, the scheme expanded, with KELY occupying three stations and dispersing more than 80 water-bearing volunteers throughout the stadium. But KELY isn’t just a band-aid organisation, as the group spends the rest of the year visiting schools and running life skills workshops to promote peer support, self-confidence, self-awareness and a sense of worth among young people. Last year alone, KELY’s outreach programmes, events and social media reached more than 44,000 youths, while the team believes it has already made contact with around 30,000 people in their 14-24 target age group so far this year. “We understand that some of the larger umbrella issues surrounding drugs and alcohol are to do with self-esteem and bullying, so we do workshops in these areas,” Tim Woo, KELY programme coordinator told Localiiz. “If we teach them about drugs and we don't teach them to take care of themselves, they're not going to be able to put our ideas into practice.” One of the charity’s biggest initiatives is Growing Up With KELY, a programme that supports students throughout their schooling from grade seven to graduation. “The youths are starting to recognise us now because of all the stuff we’ve been doing in schools,” Tim said. “Yesterday I was walking through the stands and a bunch of teenagers from a school I spoke at shouted, ‘Its them! Save our sevens! We want water!’ They associate the yellow t-shirts with the trust of Kelly, which is great.” Although KELY admits that there is no quick fix when it comes to the rising trend of hidden drug and alcohol abuse amongst Hong Kong youngsters, the huge impact the group had over the weekend makes it hard to imagine a Sevens without them. “Drugs and alcohol are everybody’s issue,” explained executive director Chung Tang. “We all have a responsibility to do something, and the whole ‘Just Say No’ approach doesn't work for us.” “We were just so pleased to be at the Sevens and to be able to provide that kind of service again. We're a very small organisation and what we did was pretty phenomenal. More than 25 youths have already contacted us to say thank you, and that's the best reward ever.”To find out more about the KELY Support Group or to get involved in future events, visit the website or call in at the office at 12 Borrett Road, Central.
SAVE OUR SEVENS with KELY Support Group Keeping Hong Kong kids safe at the biggest party of the year March 20th 2013 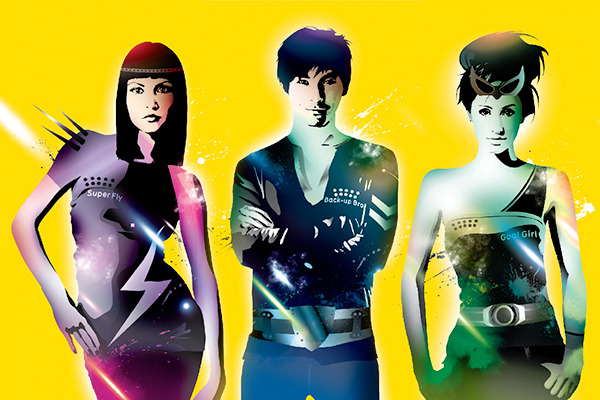 The KELY Support Team will be looking after youths throughout the Sevens We know the Hong Kong Sevens are as much about fun and excess as they are about the rugby, but excess in the extreme is no fun for anyone. That’s why Localiiz is backing the Save Our Sevens campaign, run by the KELY Support Group and the Hong Kong Rugby Football Union, which will be working to keep youths safe at Asia’s largest sporting event. The anti-binge drinking drive, now in its second year, is headed by three superheros: Goal Girl, Back-up Bro and Super Fly, all of which will be promoting harm reduction strategies in Hong Kong Stadium between Friday March 22nd and Sunday March 24th. Localiiz will be shadowing the KELY Support Group at the Sevens on Saturday to help publicise the campaign and lend a hand when needed. Localiiz founder and director Richard Codron said: “I’ve got two sons who attended the Sevens throughout their teenager years, so I’m we'll aware of what youngsters get up to. I’m not sure if you can prevent them getting alcohol full stop, so this initiative is especially important. No-one wants to put a dampener on the party, but keeping the kids safe should be top priority,. Localiiz is behind KELY's Save Our Sevens campaign all the way!” Worse-for-wear youths will be encouraged to drink plenty of water and offered a quiet place to escape the mayhem at KELY’s onsite Chill Lounge. The team will also be offering advice to youngsters about how best to look out for their friends, and providing distracting activities, such as face painting, henna tattoos and instant photos. A major focus of the campaign is to prevent binge drinking by helping young rugby fans recognise their limits and make informed choices about what they put in their bodies. This year, the campaign is set to run on an even larger scale, with the KELY team occupying three different areas around the stadium: the Upper West Stands next to the Escalator, the Upper West Concourse at location 331, and the Main Concourse at location 107. Chung Tang, the Executive Director of KELY, said: “According to recent statistics from the Department of Health, the second-highest proportion of binge drinkers in Hong Kong are between the ages of 18 and 24 - this is of course something we’re very concerned about. This is why we want to not only promote the harm reduction message at the game but also want young people to know that we are there for them whenever they need us.”

Brandon Huang, Head of Community and Development of the HKRFU, said: “The HKRFU are delighted to be working with KELY Support Group as part of our ongoing commitment to promoting a healthy and positive lifestyle in the youth community. KELY is a perfect partner for us, sharing similar values and an education based approach to empowering youngsters to make informed lifestyle decisions.”