7 Hong Kong breweries you should know about

If you told us a few years ago that Hong Kong would be at the forefront of innovation in craft brewing and home to some of the most exciting breweries in the region, we would have laughed at you over our pints of Asahi. But then something funny happened. Small local breweries started gaining traction, upgrading their facilities, and winning international awards—and now, home-grown brands like Gweilo, Heroes, and Young Master have become global names.

But it seems like there are more and more craft breweries popping up nowadays, and it’s hard to separate the wheat from the chaff—which is why we’ve rounded up seven of the best and most exciting breweries in Hong Kong today that we think deserve a little more love and recognition. We’ve also selected a recommended beer (or two) for each brewery, just for a little extra guidance. Prost! 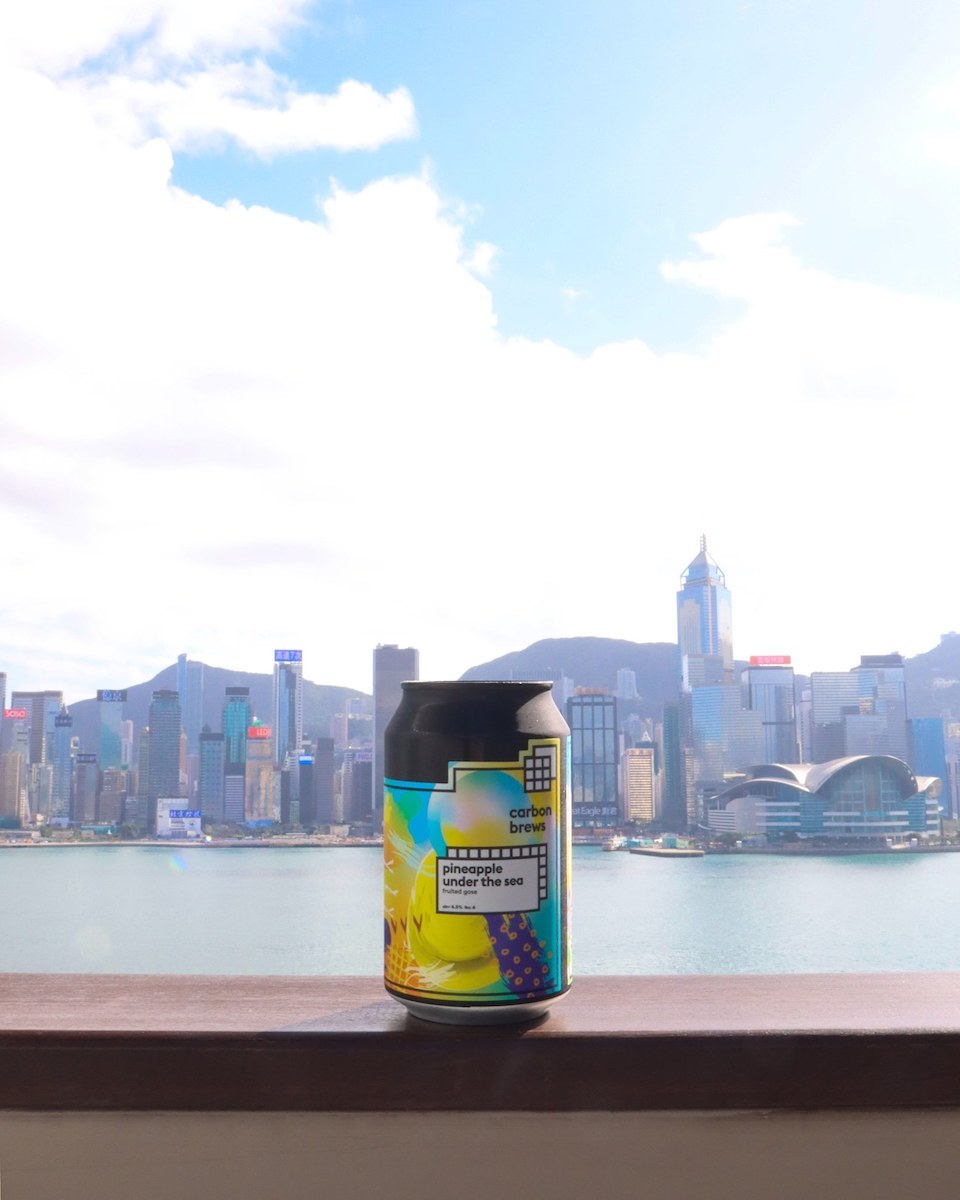 This brewery is known for its funky and experimental style, from the art on its sleek black cans to the juice inside. Think breakfast-inspired coffee-and-oat stouts, fruit punch-esque sour beers, and cardamom-spiced wheat beers. Not content to just shake things up flavour-wise, Carbon Brews is also prone to releasing limited-edition beers in drops and collaborating with other breweries, à la streetwear, and even curates playlists for their flagship drinks.

Some of Carbon Brews’ best sellers from their core range are Little Rich Lupulins and Crazy Rich Lupulins—both of which are NEIPAs, or New England India Pale Ales, which are characteristically juicy-tasting and hazy in appearance. The brewery also experiments with limited-batch variants within the Lupulins series, with their most recent drop being the Little Rich Lupulins v.7 Hazy IPA, which has been brewed with experimental floral, fruity, and woody hops. 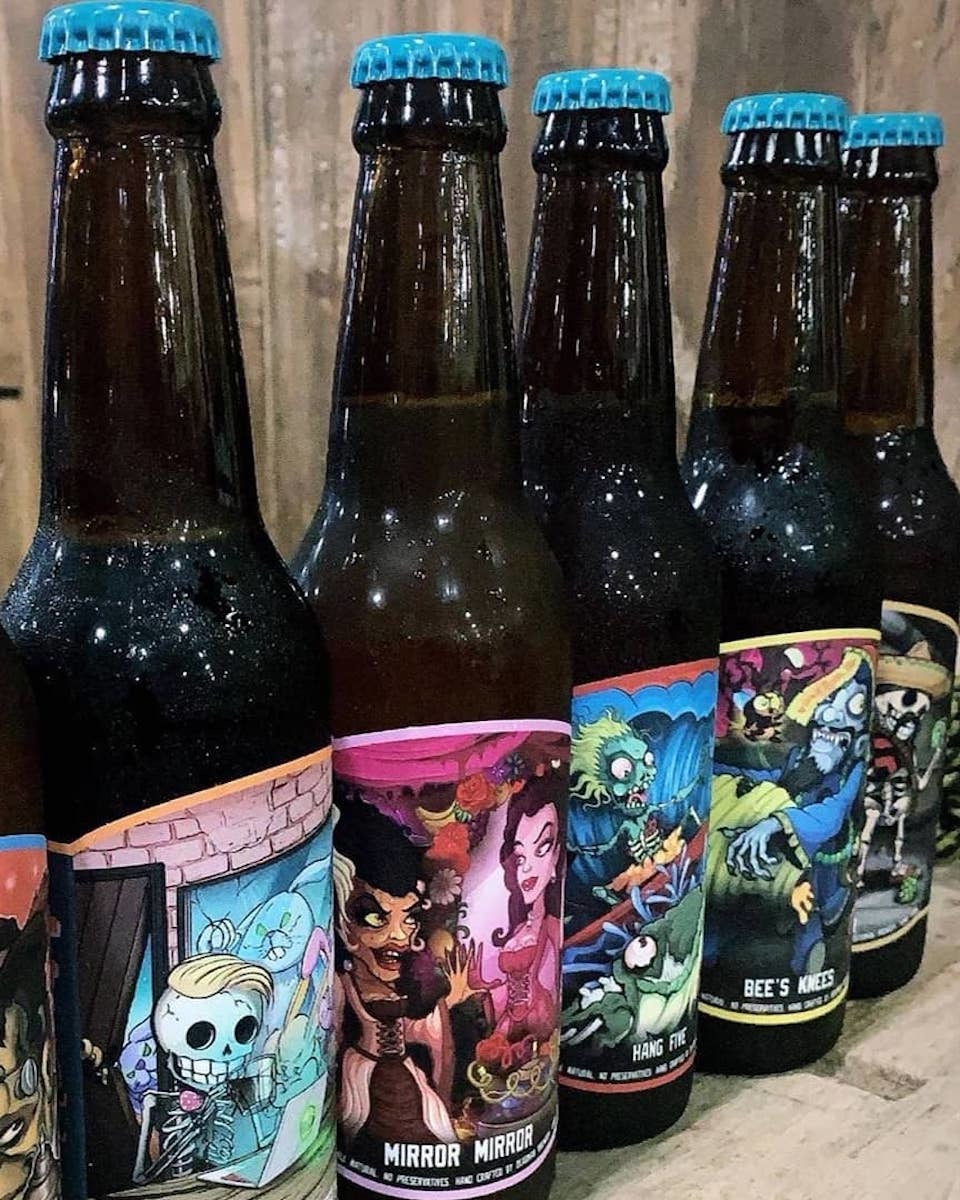 Despite the fact that they’ve been around since 2016, this self-described “start-up nano-brewery” is still somewhat under-the-radar. But their modesty belies their success: Deadman cleaned up at the most recent Asia Beer Championships, taking home not one, not two, but six awards and an honorary mention. On top of winning the Champion Small Brewery award, Deadman also won two gold awards for their pale ale and double IPA, as well as two silver awards and one bronze award in the pilsner, IPA, and experimental beer categories.

With that in mind, you really can’t go wrong with any of the Deadman offerings—heck, you could try one of each and keep the bottles for their cute comic-style labels—but if you’re interested in tasting what makes a gold award-winning beer, grab a bottle of Mirror Mirror Pale Ale or Hop Robber Double IPA. 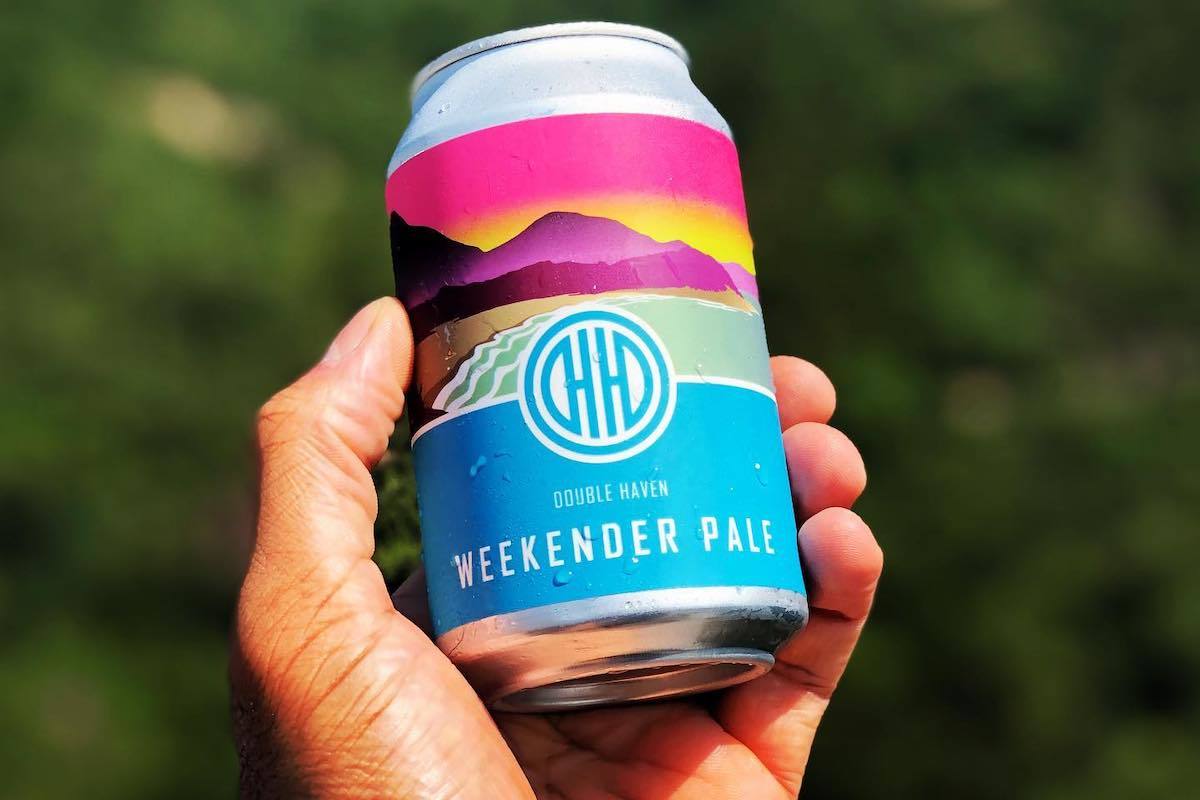 If you’re a fan of light, easy-drinking beers, you may well enjoy the brews from Double Haven. The name “Double Haven” comes from a stunning cove in Yan Chau Tong Marine Park which inspired the brewery’s adventure-loving team to create a “crisp, no-fuss beer.” The product line is short and sweet—just a lager and a pale ale—and described by Double Haven as being “beer-flavoured beer.” This is beer for road trips, rock pools, and beach parties—sessionable, light, and refreshing.

But that’s not to say that the Double Haven guys don’t like to play around with fruity flavours—just check out their spiked seltzer line, Dragon Water (we like the Lemongrass Lime flavour). They’re also planning on debuting a line of canned cocktails soon, so watch this space!

Weekender Pale. Double Haven’s best-selling brew is a pale ale with a pilsner malt base that’s spiked with citrus-forward hops. Best for weekend warriors who set out at the crack of dawn with a full Esky and a pair of sunglasses. 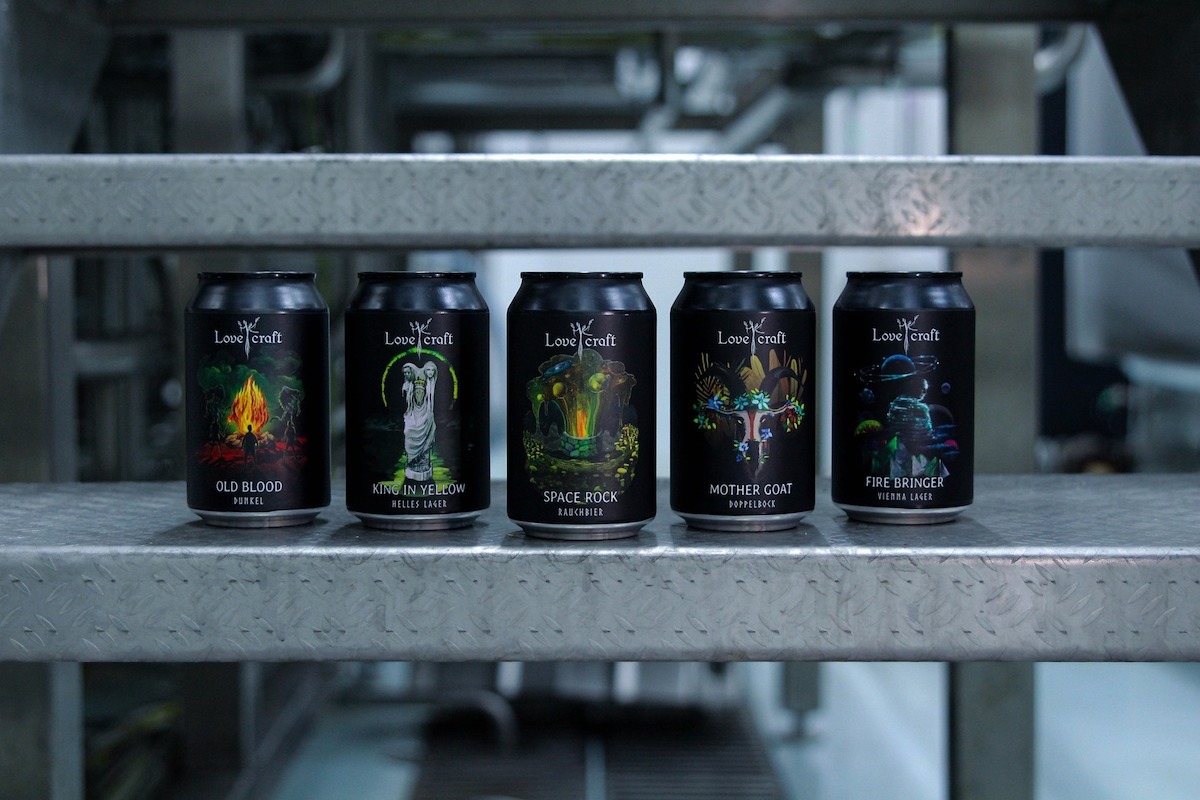 For those who love all things horror—or just a dang good lager—H.K. Lovecraft (or just Lovecraft for short) is a must-try. Inspired by the author H.P. Lovecraft, this brewery celebrates mysticism as part of its branding and often likens the art of brewing beer to alchemy and occultism. Focusing specifically on traditional German lagers, Lovecraft is exclusively brewed by Hong Kong’s first German brewmaster, who turns out deliciously complex varieties of lager, from the nutty, caramelly Vienna Lager to the smoky and complex Rauchbier, and more.

Helles Lager. As an intro to Lovecraft, try this light golden beer—whose name rather aptly translates to “bright” in German—with its (pleasantly) bitter taste and light body, Helles is one of Lovecraft’s most popular beers. For a rich and indulgent cold-weather drink, try the Doppelbock, a sweet and full-bodied lager with peppery earth notes—just pace yourself, because it’s got an ABV (alcohol by volume) of 8 percent. 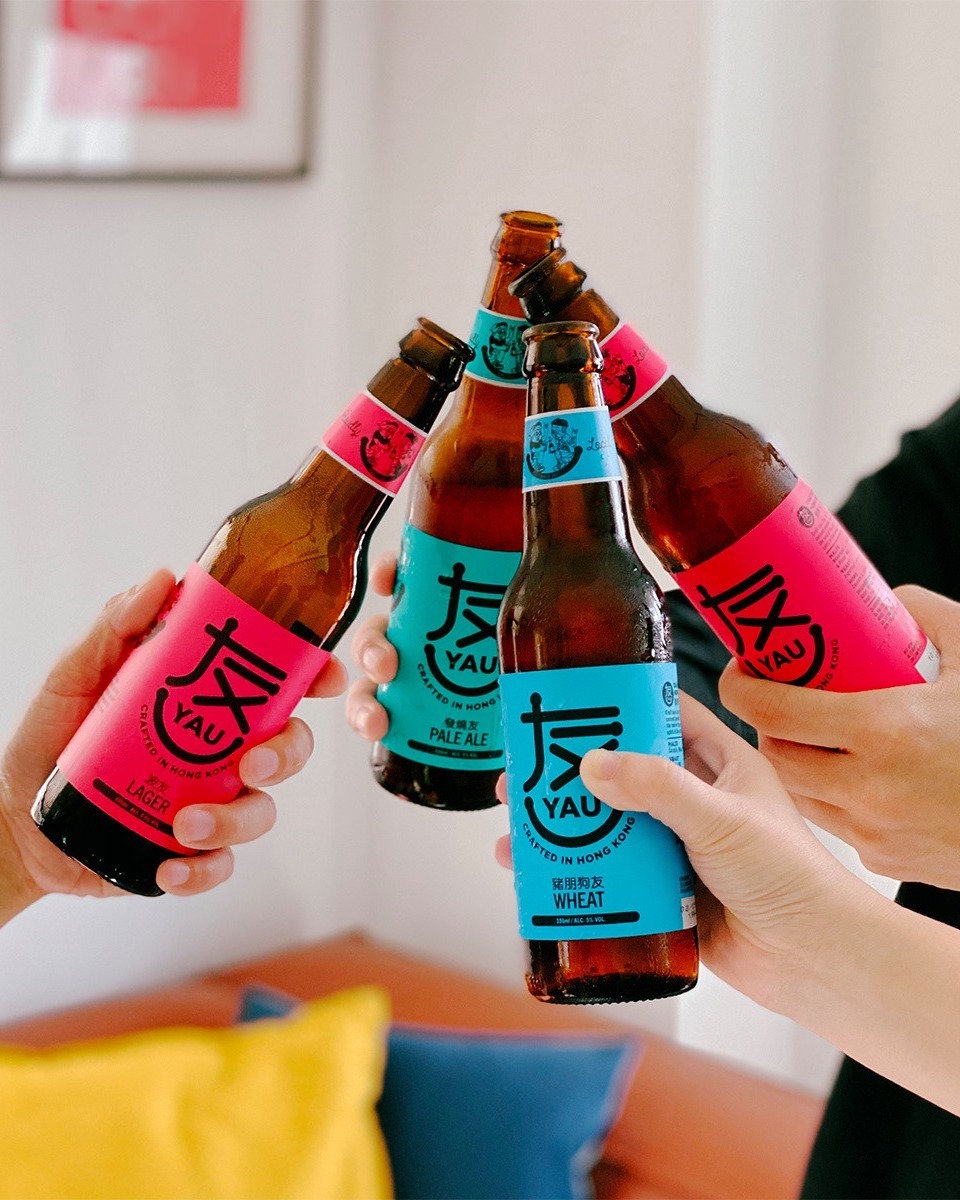 For an introduction to craft beer, there is no brand that’s better positioned to convert “mainstream” beer drinkers than Yau (formerly known as HK Yau). This locally brewed beer, which is a collaboration between Carlsberg and Brooklyn Brewery, can be found everywhere from bars to supermarkets and even your neighbourhood convenience stores.

The brand, which touts itself as being “proudly local,” has a history of giving its beers Hong Kong-specific names, including the now-discontinued Times Square Lager. Following a large-scale rebranding earlier this year, Yau renamed the three beers in its lineup, giving them slangy Cantonese names like Bor Yau (football friend) and Chu Pang Gau Yau (an indulgent, gluttonous friend) and refreshing the labels with designs from local artists.

Fat Siu Yau Pale Ale. This pale ale is a great “intro” to craft beer—it’s got notes of citrus, tropical fruit, and malt. For something with a bit more Hong Kong flavour, try the Chu Pang Gau Yau Wheat Beer, which is brewed with Curaçao orange peel and Chinese tangerine peel (陳皮; can4 pei4) 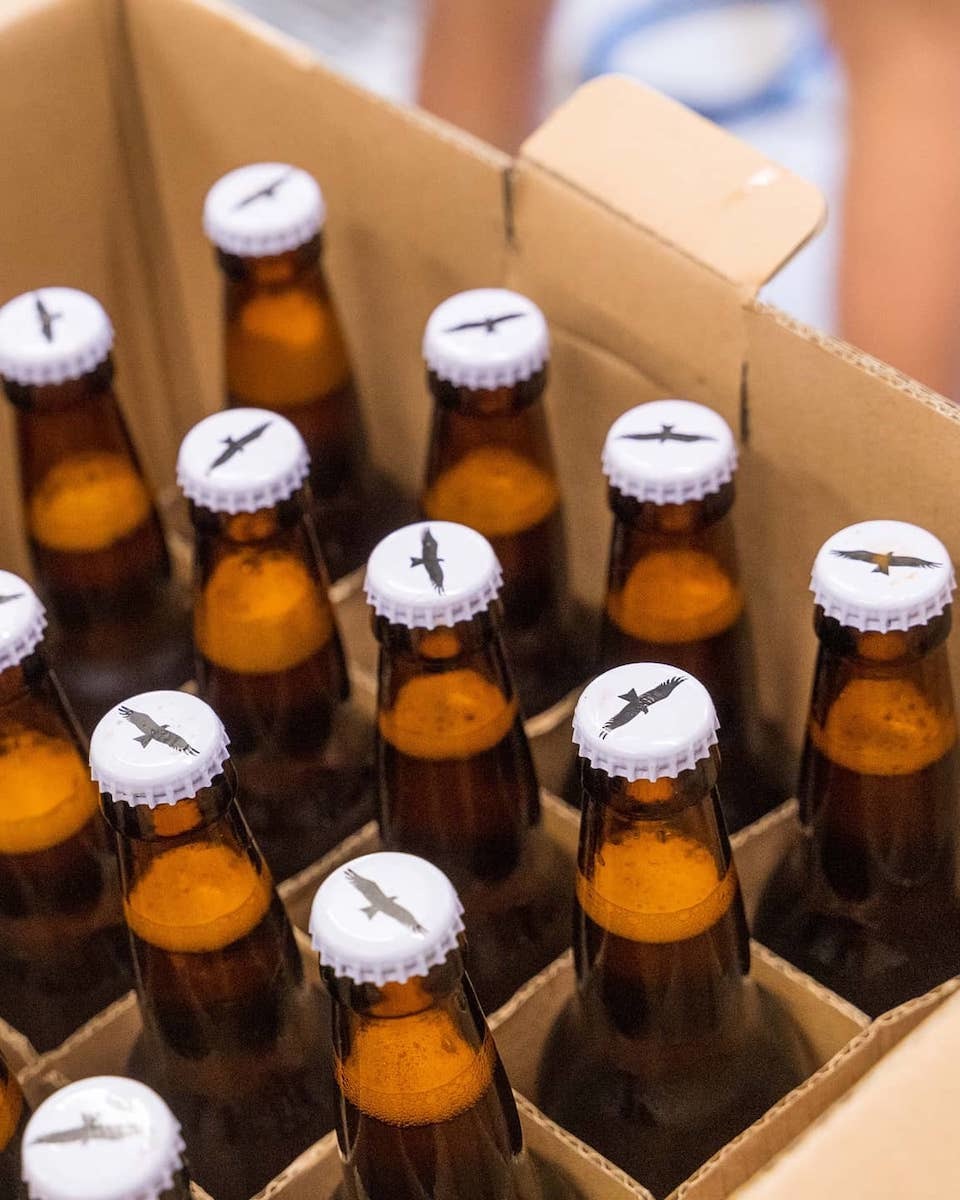 As one of the OG Hong Kong breweries, Black Kite may already be familiar to you—but what you might not know is that they recently revamped their entire line after expanding the team and listening to community feedback. So while the Hong Kong origins and years of expertise remain, it’s basically a whole new brewery to discover. We’re not kidding about the Hong Kong connection, by the way—founders Daniel and David Gallie are Hong Kong born-and-bred, and even made a limited-edition Hefeweizen called Squeeze the Day that they brewed to go with Cantonese sweet and sour pork (咕嚕肉; gu1 lou1 juk6).

Birds of Prey IPA. This reworked version of the brand’s flagship Birds of Prey IPA has retained its DNA—the rich coppery colour and citrus notes—while boosting its flavour and introducing light floral notes. While it is not exactly low, the 5.7-percent ABV means you can easily have a few bottles in one night—and trust us, you’ll want to. 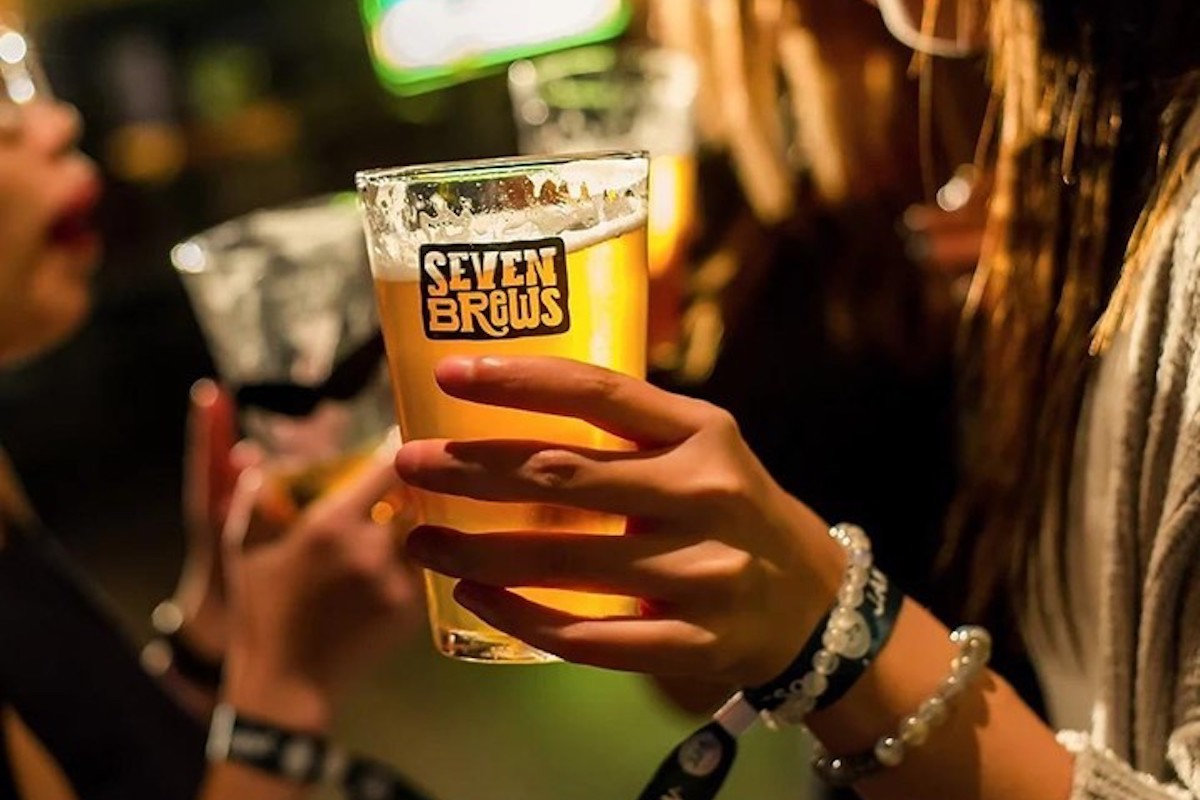 Another one of Hong Kong’s OG craft beer brands is Seven Brews, the inception of which we have Tinder to thank—really! Founded by a real-life couple who met on the dating app, Seven Brews is named after the seventh batch of homebrew they made, which was the first recipe they were both happy with.

In the four years they’ve been around, Seven Brews has been quietly putting out hit after hit, with their permanent range including favourites such as the Too Easy IPA (which, as the name suggests, goes down a treat) and the stone fruit-tinged 7 Seas Pilsner. Look out for their special seasonal ales, like this year’s Summer Squeeze Passionfruit Summer Ale, which is bursting with tart tropical flavour.

Punch Drunk NEIPA. For those who enjoy hazy, juicy IPAs, this is a must-try—brewed with citrusy, tropical hops, this is joy in liquid form. 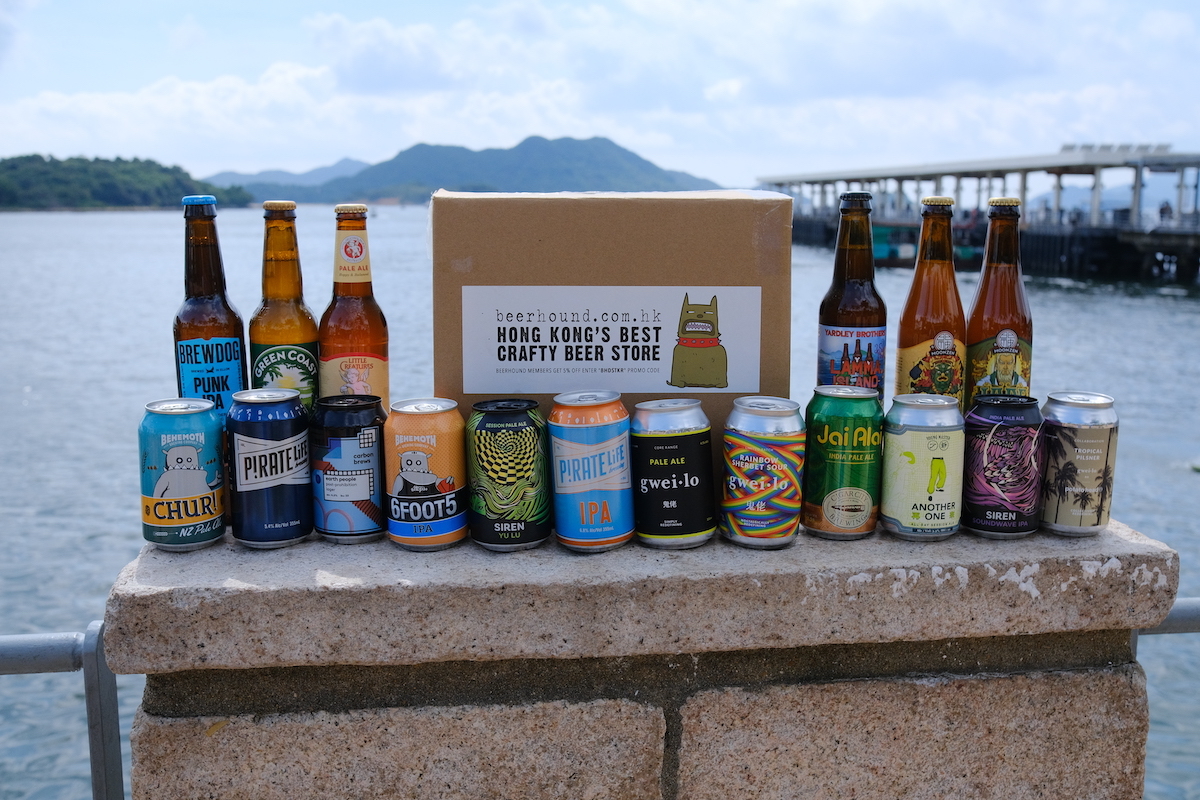 Fancy trying all of these beers, but don’t know where to get your hands on them? We’ve got you. Or rather, the beer-loving folks at Beerhound have got you—all of these breweries and plenty more local and international names are available for purchase on their website. But it’s not just craft beer!

With Beerhound, you can find over 500 different types of beer ranging from craft darlings to mainstream household names at great prices in one convenient place—they currently have great deals on Peroni and Pilsner Urquell, for example—and there’s even free delivery for orders over $800 (available everywhere in Hong Kong except the outlying islands). And, in solidarity with the local craft breweries whose businesses have been impacted by the pandemic and government regulations on bars, Beerhound is offering a five percent discount off all local beers from now until 31 March 2021.

From now until 31 December 2020, you can even get 10 percent off your first order and two free craft beers by entering the promo code LOCALIIZ at checkout—find out more here.

Do you have very specific preferences? Use Beerhound’s handy filters to narrow down your search, whether you’re looking for low-ABV, gluten-free, or anything else. Or perhaps you’re a craft beer novice and don’t know where to start—in which case, you can browse the mixed cases and gift sets. Check out the Hong Kong-focused six-pack, 12-pack, or 24-pack for a taste of hometown pride, or the 12-pack staff pick taster set for an expertly curated variety of international beers. For an easy-drinking mixed case, check out the Perfect Thirst Aid Box—a staff-curated 24-pack of popular pale ales, craft lagers, and IPAs.

Founded by a group of like-minded friends who discovered a gap in the market for a Hong Kong-specific curated craft beer, lager, and ale delivery service, Beerhound’s team is committed to sniffing out the wildest, weirdest, and best-tasting beers from all around the globe. Boasting a robust collection of over 500 local and international beers, Beerhound is one of the largest and most convenient places for Hong Kong-based beer lovers to get their fix. For the dedicated drinkers among you, Beerhound even has a membership programme which offers exclusive promotions, loyalty points, and first dibs on new drops.

New Restaurants: Where to eat and drink in Hong Kong (April 2022)