Mardin is a city rooted in the Southeastern Anatolia Region of Turkey close to the border of Syria and Iran. As one of the oldest settlements of the Upper Mesopotamia plateau where different civilisations have flourished for centuries, this ancient city is laced with poetic landscapes, mesmerising histories, magnificent architecture, and colourful culture.

Its name, Mardin, means “fortress” in the Syriac language, and it was first ruled by the Assyrian Empire named Izala around the eleventh century. Over the course of history, Mardin has become a multiethnic and multireligious city, home to Turkish, Kurdish, Armenian, Syrian, Arabian, and Jewish populations. Traces of its cultural fabric are noticeable from the city’s landmark stone houses and monasteries. Some of the age-old buildings have been converted into boutique hotels and restaurants to accommodate visitors.

As a cradle of agriculture, Mardin is also considered a culinary jewel of Mesopotamia, where local cuisine mirrors its cultural heritage and diversity. It also produces an abundance of traditional handicrafts, such as the kilims (woven tapestry) and telkari (handmade silverwork). Read on for how to best explore this historical destination. 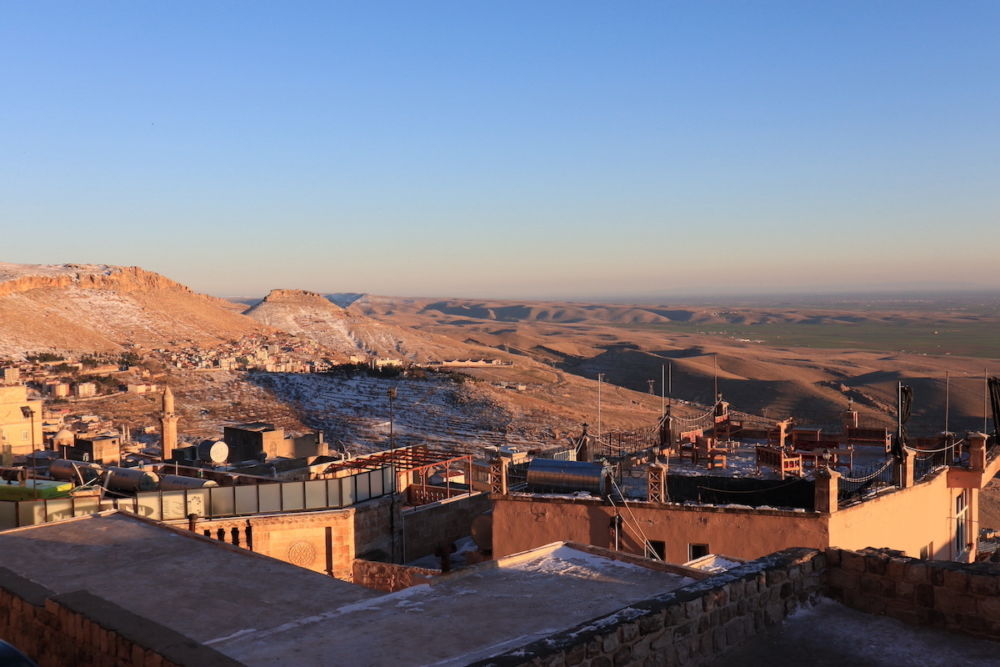 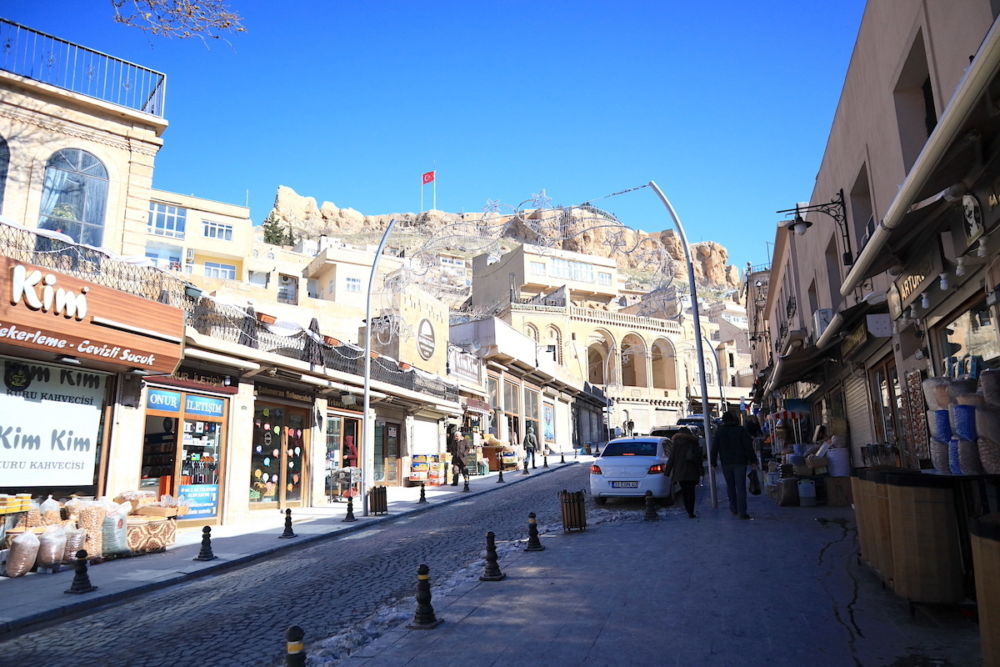 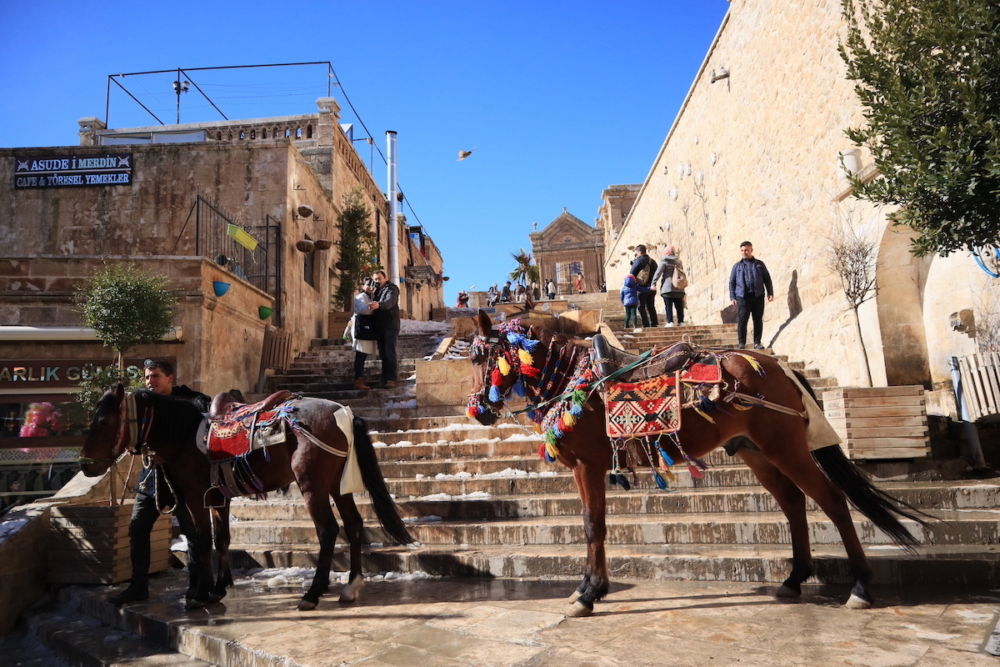 Mardin’s Artuklu district—a.k.a. the Old Town—presents the city’s most signature façade, with honey-coloured limestone houses and unique buildings from the Artuqid dynasty spilling down the side of a defensible hill above the Mesopotamian plains.

A walk through this UNESCO-protected ancient town will transport you back to the eleventh and twelfth centuries where it feels like time has stood still. Sight-seeing here needs no fixed schedule and the best way to explore is by getting lost in the labyrinthine cobblestone streets and narrow alleyways while watching daily life unfolds. Observe closely and you will see that some of the passageways actually run in the opposite direction to the sun to offer shade to pedestrians during the hottest time of the year.

On 1 Cadde, the main street that stretches across the heart of old town, you will find handicraft shops, cute cafés, stores offering telkari (an intricate form of jewellery-making with extremely thin gold or silver), and horses clopping down the lanes. 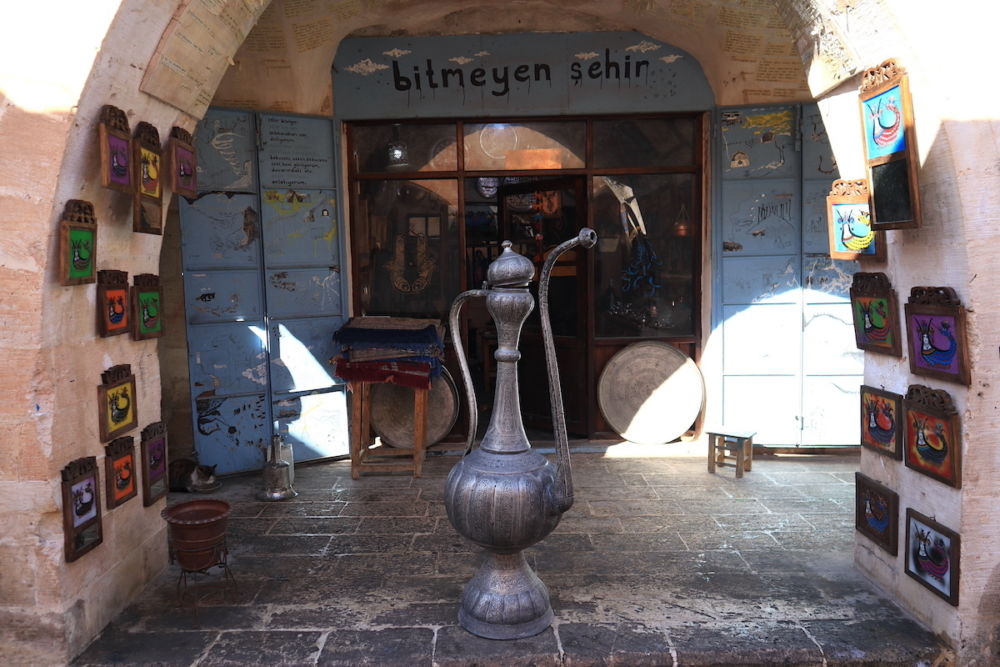 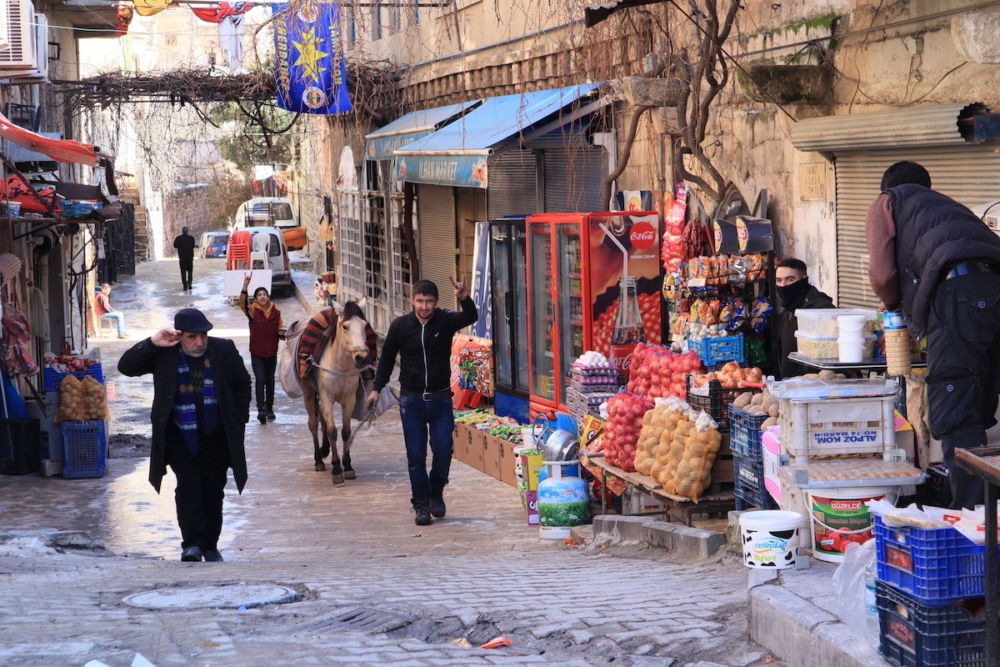 Walking down the staircase from the main street will bring you to Revaklı Çarşı—also known as Tellallar Çarsisi—nestled in the traditional bazaar area. You will find different shops lined up behind the arched porticos on both sides of a courtyard, selling things like fresh produce, dried fruits and nuts, local souvenirs, leather goods, and kitchenware.

Visit an artisan’s workshop, where craftsmen can be spotted carving the likeness of mythical creature called the Shahmaran on a metal plate. Small cafés offer cups of Turkish coffee and the opportunity to rest your feet sitting underneath the porticos. Indoor and outdoor markets nearby also provide vibrant insights of the locals’ daily life. 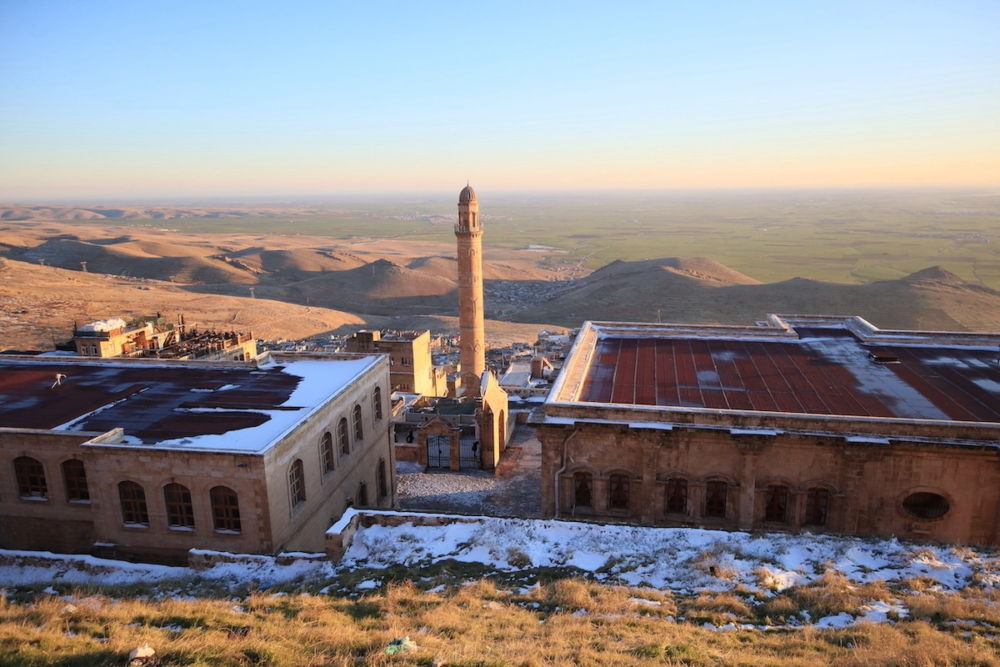 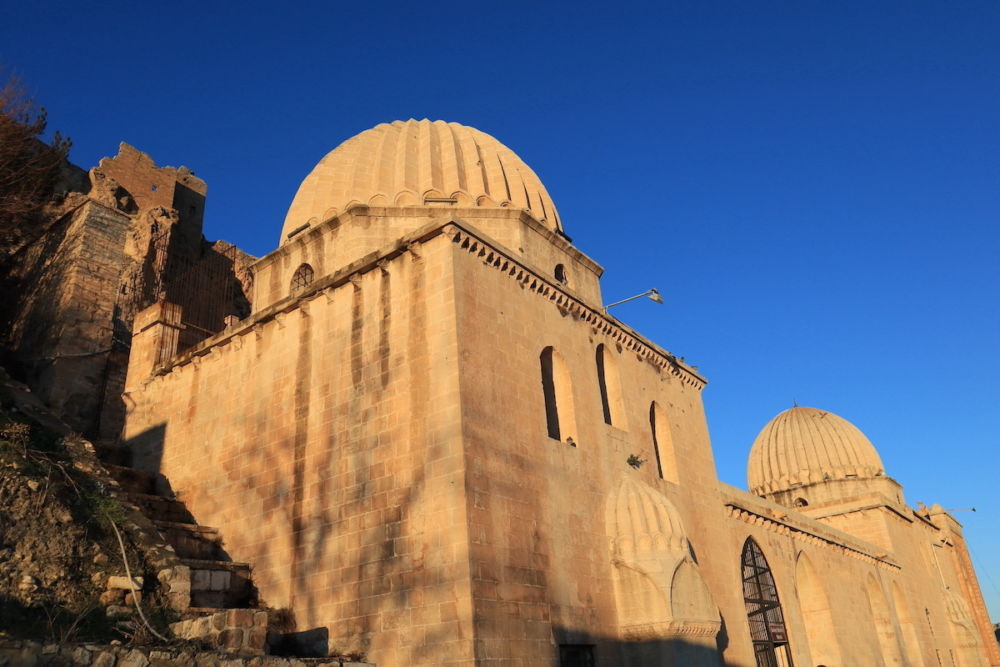 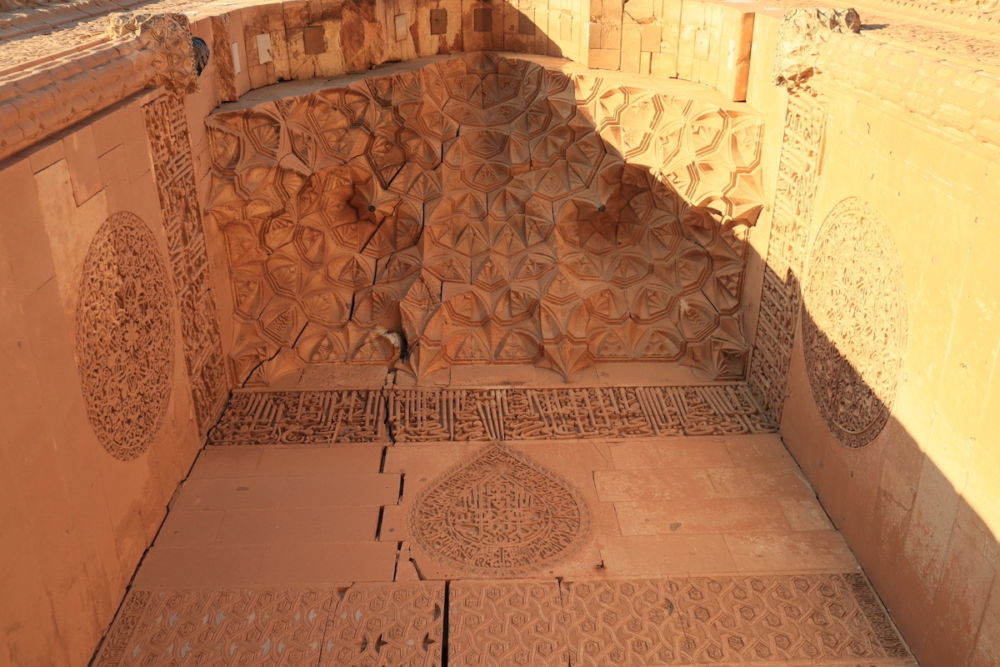 An important landmark of Mardin is Zinciriye Medresesi, where a spectacular view of the old town cityscape and Mesopotamian patchwork fields awaits. Situated below the Mardin Castle, which is now used as a military base, this historical monument was built in 1385 by the last ruler of Mardin during the Artuqid dynasty, who was also imprisoned here for a while when the first emperor of the Timurid dynasty invaded this ancient city. Later, Zinciriye Medresesi was turned into a theological colleague until the 1920s.

Its two-storey building covers a spacious rectangular courtyard, tomb, and mosque. Visitors can appreciate stunning carvings on arches and stone façades as they stroll around. Its most distinctive architectural features are two large domes conquering the east and west edges of the building. Zinciriye Medresesi is not only a popular tourist attraction, but also a sought-after location for local wedding photoshoots on the rooftop. 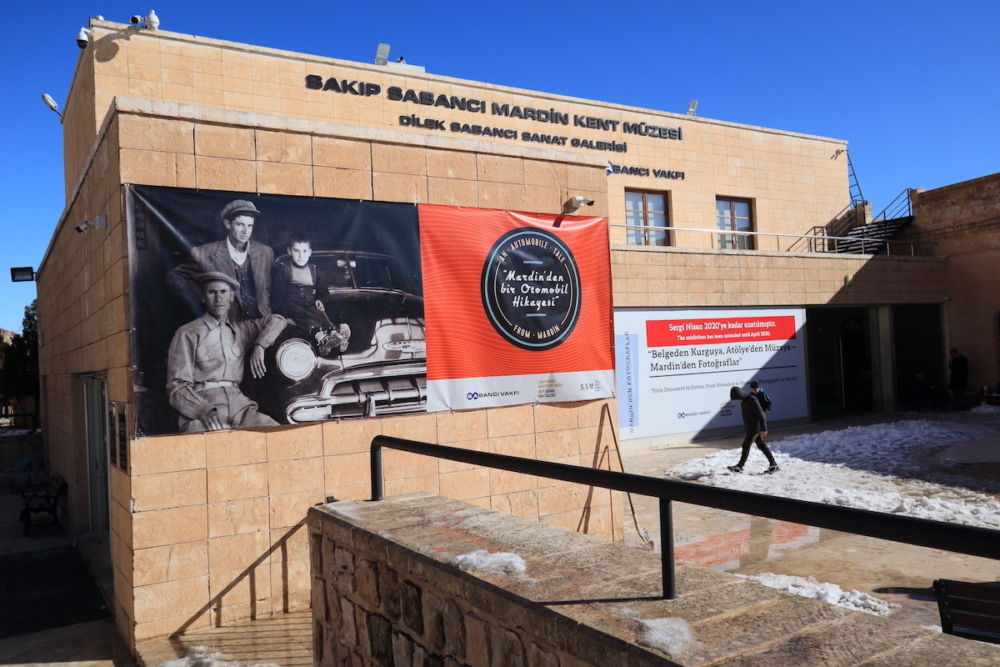 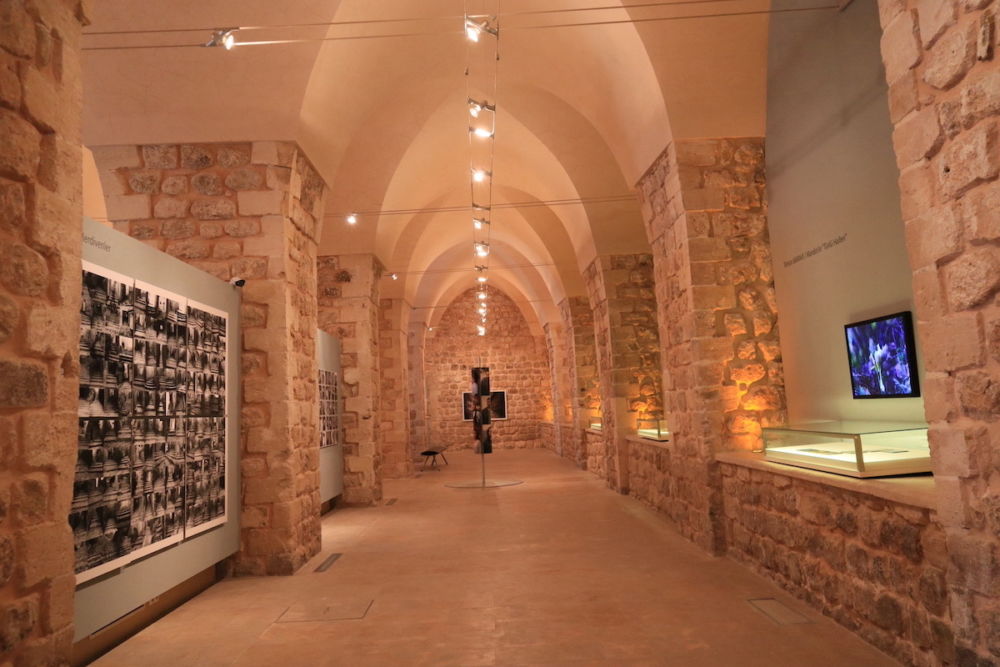 Formerly a cavalry barrack in 1889, this historic site was restored and is now home to a versatile private museum showcasing the rich history and multicultural background of Mardin. Its main exhibition presents a vivid display of the city’s past, from being a fertile agricultural region to its unique position as a melting pot of religions and cultures. Don’t miss the Dilek Sabancı Art Gallery on the lower level of the museum, which houses modern and contemporary art exhibitions, including photographs of Mardin by local artists. 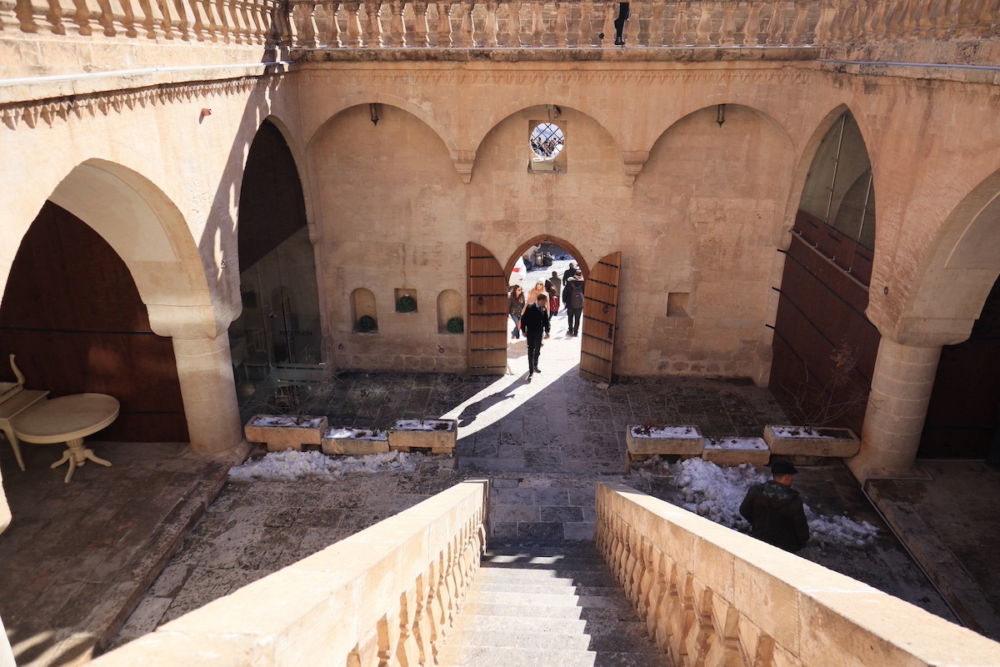 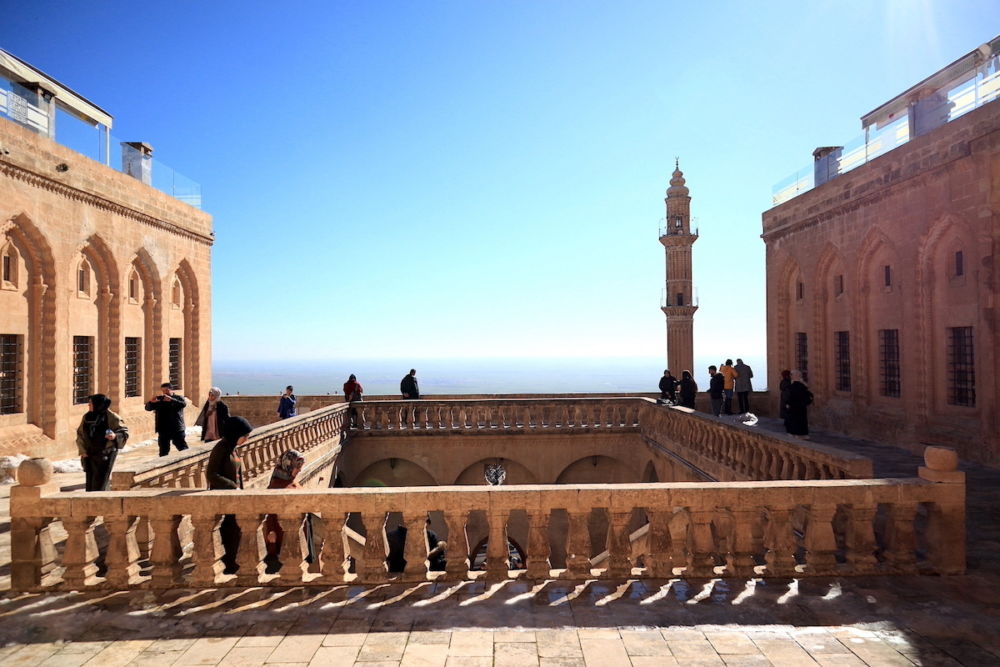 Once home to the Şahtana family as a caravanserai and built by Armenian architect Sarkis Lole in 1898, this exquisite building was repurposed into a post office in the 1950s. Nowadays, the post office only takes up a small space on the ground floor, and the stunning structure has become a photogenic attraction with a beautiful main staircase leading up to a large terrace, which is also a great spot to enjoy the city view of old Mardin.

An hour’s drive from Mardin to the northeast side will take you to this charming town known as the “City of Caves.” A trip to Midyat is worthwhile to traverse through the Syriac Orthodox churches and monasteries across the old town, including Mor Barsavmo Kilisesi, Mor Ahısnoya Kilisesi, and Mor Hobil-Mor Abrohom Manastırı.

Visitors eager to explore the underground also flock to the traditional stone buildings with caves, such as the caramel-coloured Geluske Hani, which used to be a guest house for travellers but now functions as an outdoor café. Midyat’s characteristic architecture makes the city a popular film location for films and soap operas, including the Midyat Konuk Evi, a popular tourist attraction thanks to its gorgeous façade and scenic balcony.

If you are interested in trying Assyrian wine, there are a few wine shops in the old town that you should not pass up. Before you head back to Mardin, visit Mor Gabriel Manastırı, which is believed to be the oldest and largest monastery on the plateau of Tur Abdin.

Compared to other famous archeological sites in Turkey, Dara may still be considered as “under the radar,” but the Mesopotamian ruins of this ancient Roman city located in the Oğuz village close to the Syrian and Turkish border is, in fact, a hidden gem.

In the early Byzantine era of the sixth century, Dara is believed to have served as an important fortress, judging by the stone walls and blocks still seen today in its ruins. Visitors will delight in seeing historical relics such as a large necropolis, where tombs have been carved into the limestone, as well as the remains of huge water cisterns. Walk around the village and allow yourself to imagine the civil settlements of Dara in its heyday.

Where to eat and shop 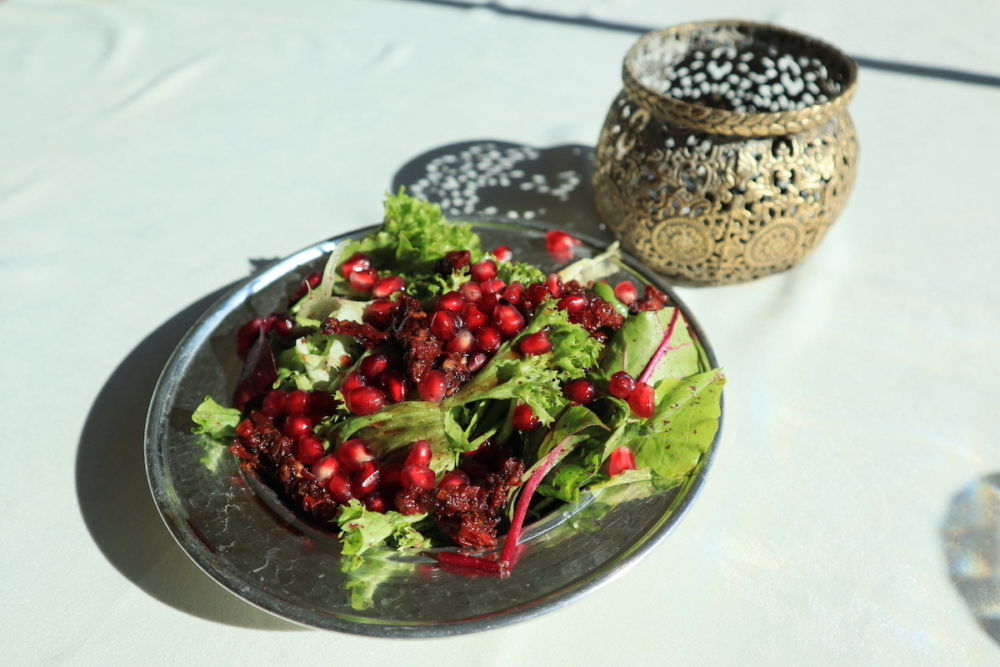 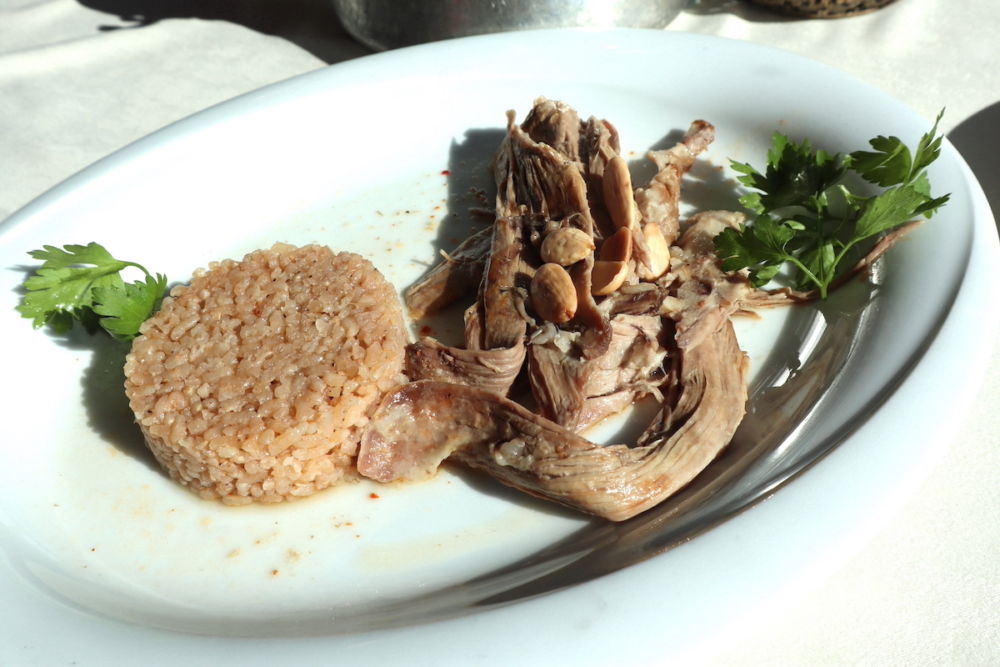 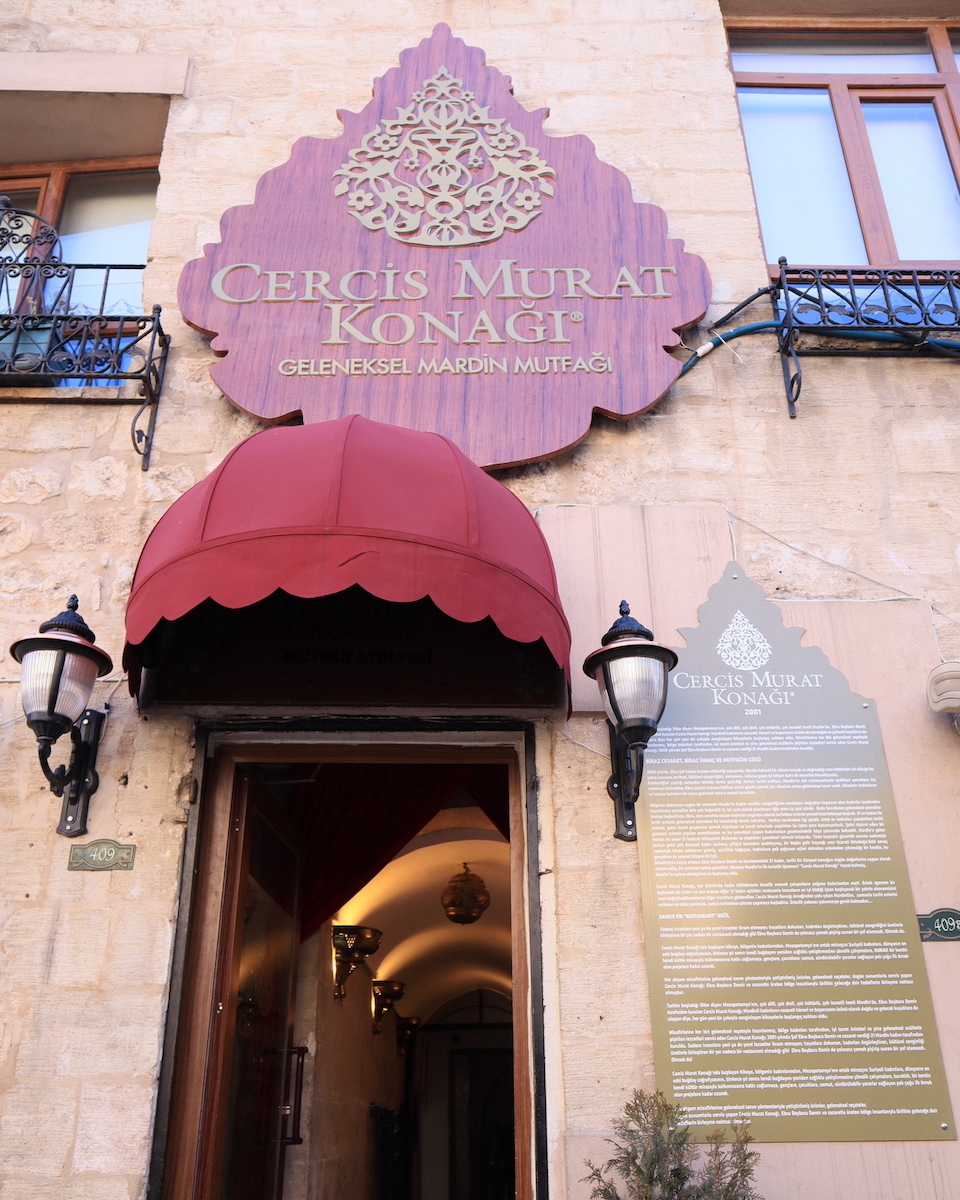 Inside an old Syriac mansion with a terrace that offers panoramic views of the Mosopotamian plains—another structure which was built by architect Sarkis Lole in 1888— Cercis Murat Konağı exemplifies the best of traditional Mardin cuisine and is perhaps the most well-known restaurant in the city. Female owner and celebrity chef Ebru Baybara Demir is dedicated to preserving Mardin’s authentic dishes and culinary delicacies. In addition, she is also on a mission to help Mardin women feel empowered by prioritising the employment of local female workers and providing training courses to those who strive to enhance their culinary skills and confidence.

Highlights of the restaurant’s menu include kuzu tandır (Turkish roasted lamb), kaburga dolması (sliced lamb ribs with almonds and rice), yöresel salatalar (pomegranate seeds salad), and içli köfte (fried dumplings with ground beef and nuts). Opt for the dazzling mezze (traditional Turkish starters) if you are coming here for a meal with friends. 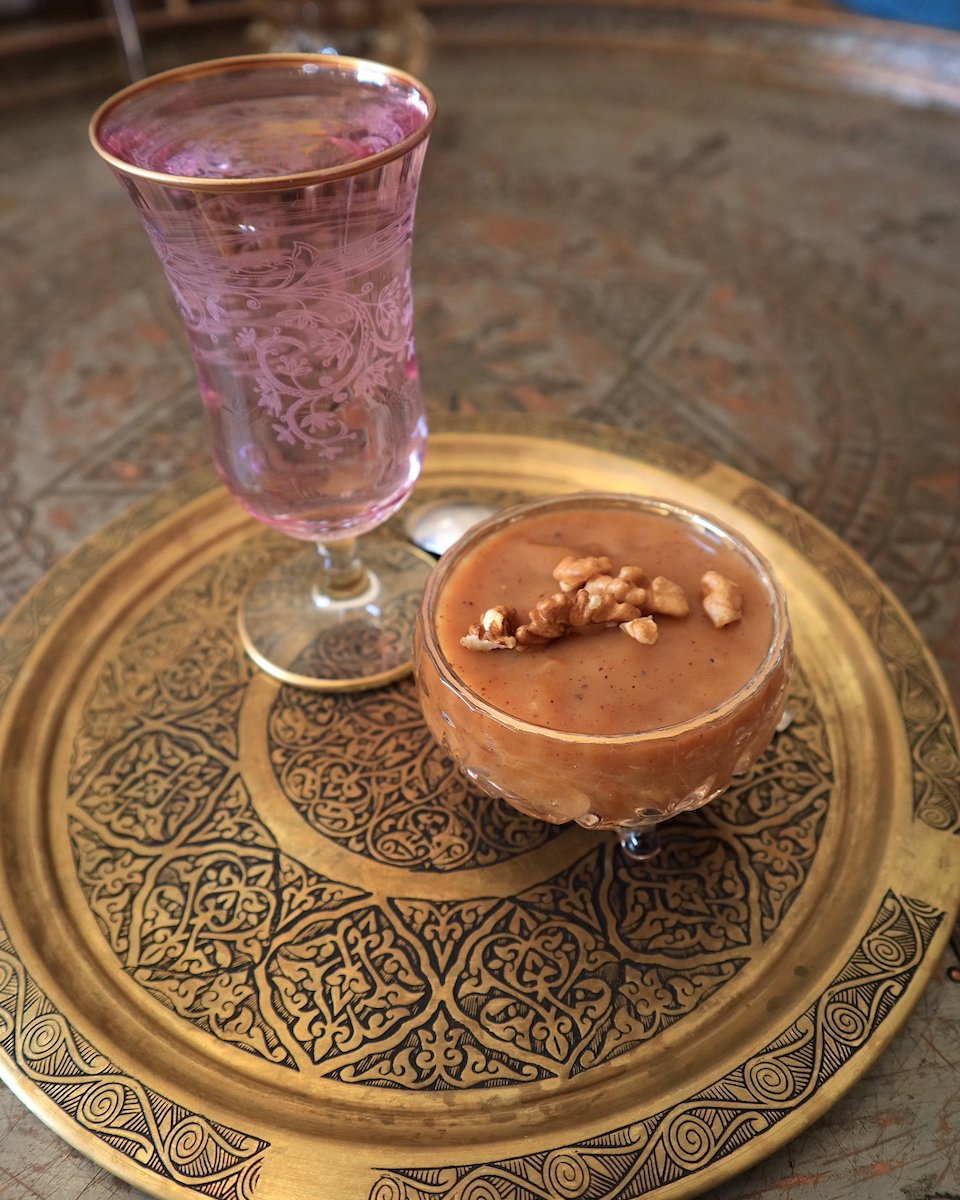 Harire Mardin’s name pays tribute to an iconic dessert that originated from the city. Harire tatlısı is a silky sweet soup made from local grape juice and flour, and is served with roasted walnuts. It used to be served during special occasions or holidays only, but now you can enjoy this deliciousness all year round. In fact, it is such a celebrated dessert that there is even a Harire Festival that takes place in the city every October. Harire Mardin is housed within a classic stone house that is over 400 years old, where they proudly serve mirra, an espresso-like coffee widely consumed in the Southeastern Anatolia Region. 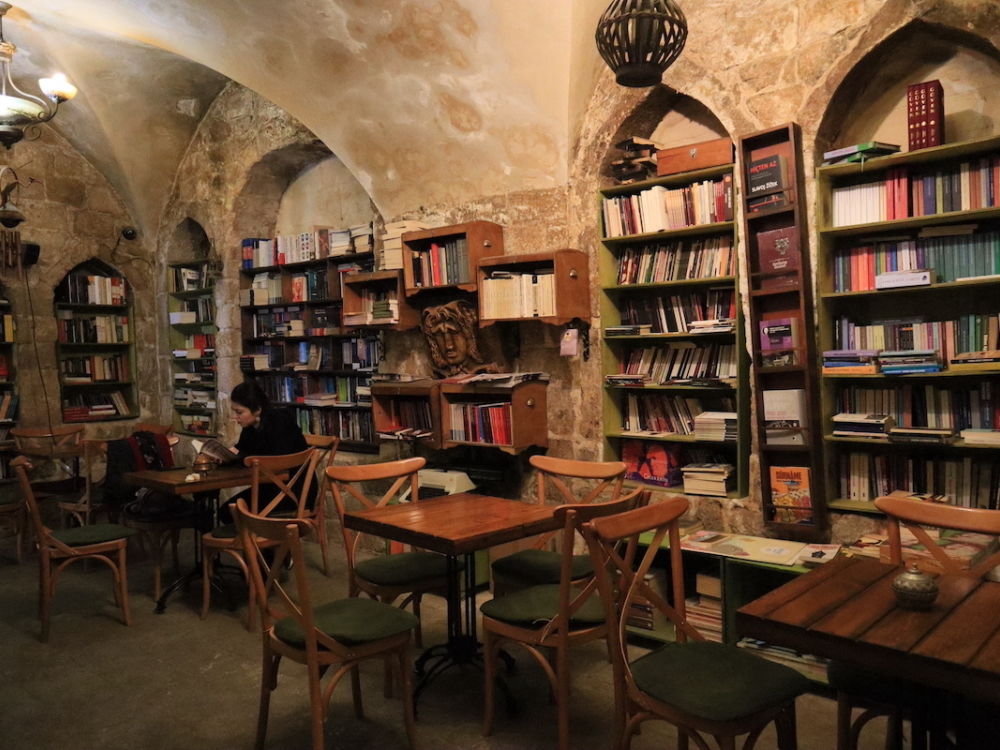 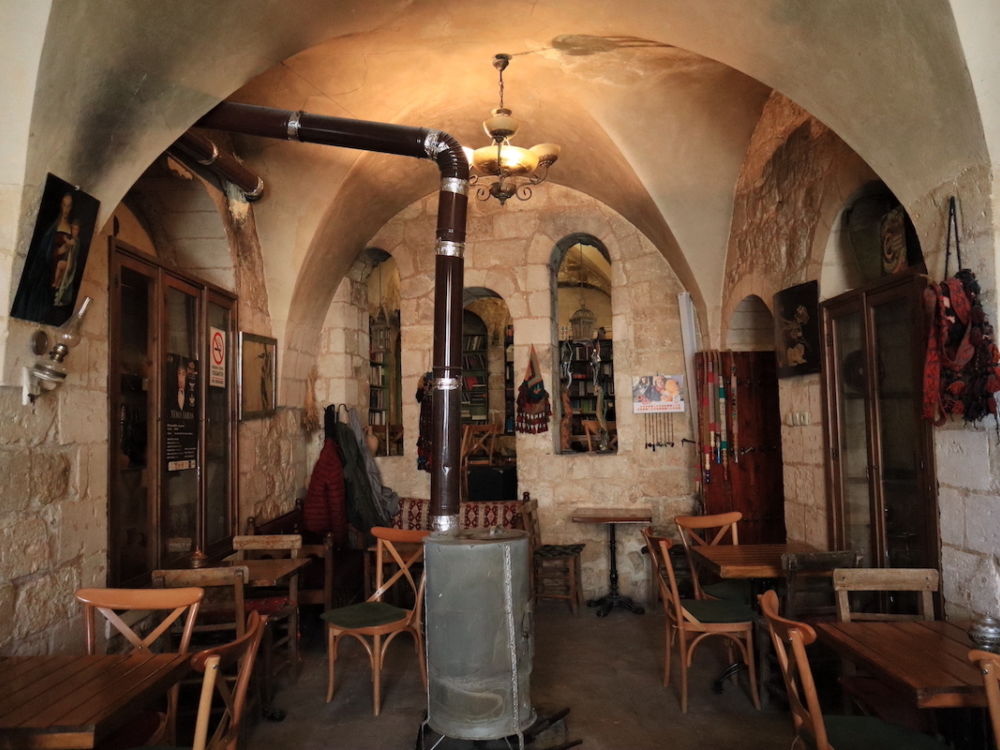 Whether you are a bookworm or you fancy a slice of nightlife, look no further than Leylan Café. This multi-storey building is more than just a coffee shop as they also have a book shop, a performance venue with Kurdish music, and even a terrace where you can sip local Syric wine with friends. If you want to enjoy a quiet morning with Western breakfast and leave the hustles and bustles of the old town, this is also your place to go.

Öz Yasemin Pide Lahmacun is a no-frills eatery where you can find the “cousin” of pizza. Both Lahmacun, nicknamed the “Turkish pizza,” and pide have been beloved staple foods for hundreds of years in Turkey. While they are both equally delatable, lahmacun is made of a thin and crispy dough with toppings such as ground meat, onions, tomatoes, and parsleys, while pide is a thicker, more oval-shaped flatbread with its sides folded in.

If you cannot resist the temptation of bringing home Mardin coffee and sugar-coated nuts, visit Kim Kim, a traditional kuruyemiş store with a dazzling array of dried foods, including fruits, nuts, chocolates, instant coffee, spices, and other local sweet treats. Sip on a cup of çay (Turkish tea) while you browse and sample products before purchase.

A good option for travellers who prefer contemporary hotels with a decent price. Hilton Garden Inn is about 20 minutes away from the Mardin Airport and 10 minutes’ drive to the Old Town. Its hotel rooms also offer a nice view of the Mesopotamian plains.

Pingquan, China: A hidden village behind all ... 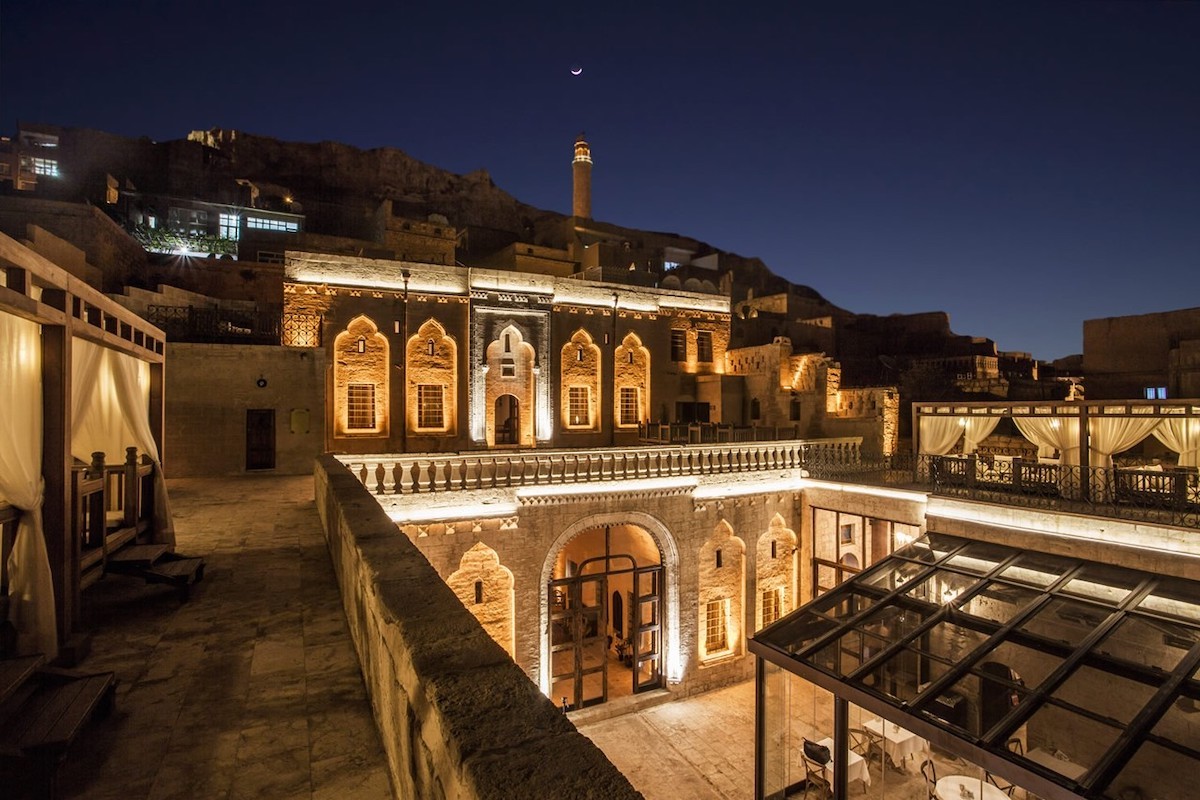 A 700-year-old historical stone mansion believed to be one of the oldest buildings in Mardin, this is an amazing choice for travellers who wish to pamper themselves with a luxury experience at a hotel with authentic décor, modern-day facilities, and services. It also has a spacious terrace with a stunning view of old Mardin and Upper Mesopotamia. 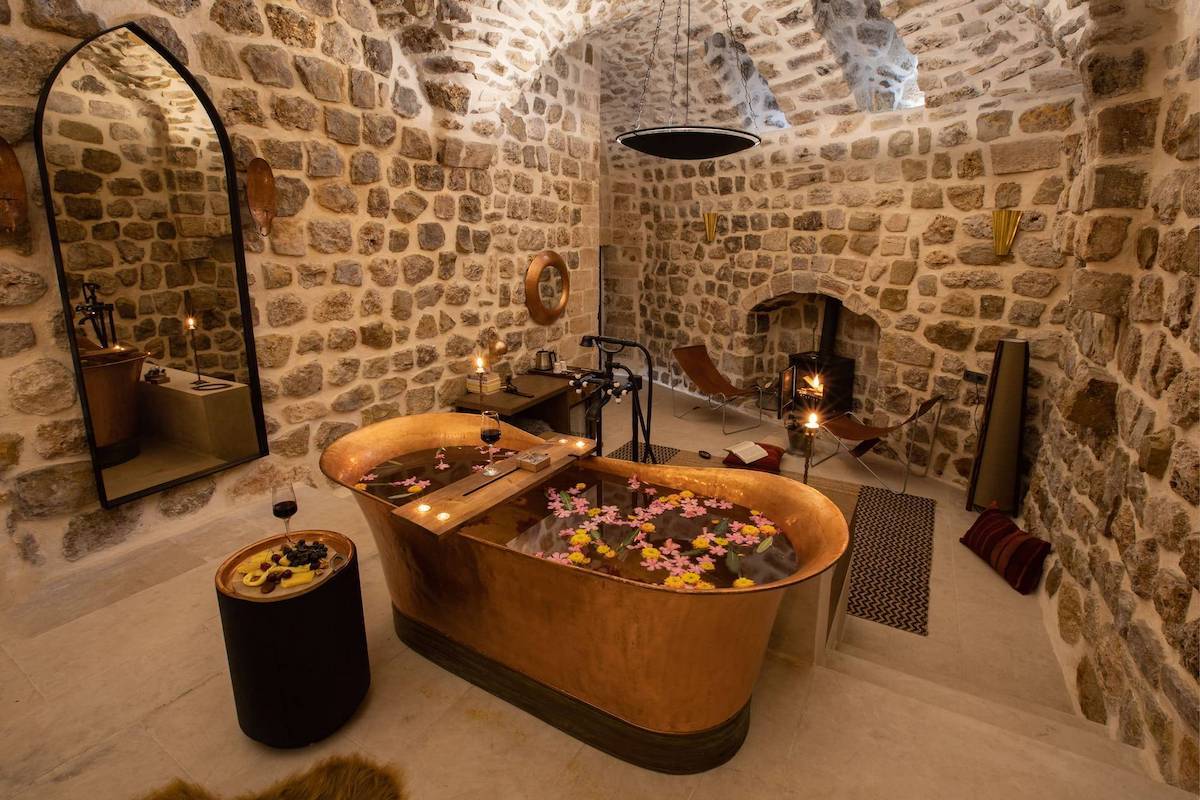 A reasonably priced aesthetic hotel inside a stone building featuring a beautiful garden and terrace within walking distance to the main street of the old town. At Mirsoum Hotels, guests can also enjoy authentic Syriac wine of the establishment’s own brand. 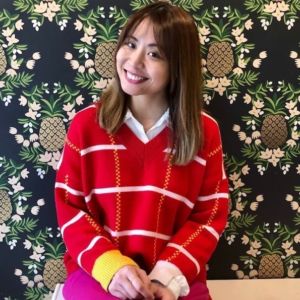