The Pulse of Childhood

Hong Kong kicked off Christmas last night in a nod to the past but with all the spectacle of modern technology. For hundreds of Hong Kongers lining the harbour front and braving falling temperatures, the fading embers of Christmases long past were stoked by a vivid music and 3D light show that lit up their faces and warmed their hearts. The eight minute ‘Hong Kong Pulse 3D Light Show’, the second of a series of three to be capped off next year with a Chinese New Year celebration, immediately captured the imagination of the audience with ear pleasing holiday music and a brilliant spectacle of coloured lights, bouncing around the Hong Kong Cultural Centre’s façade and jumping out at viewers in a unique, multi-dimensional display. 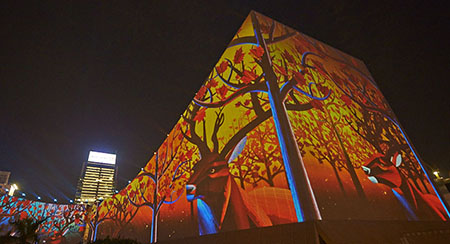 Moments later, Christmas characters made an appearance from elves in a snowball fight and trees that turned to flying reindeer. Viewers were even treated to a few Hong Kong sights including our iconic skyline, junks, and a floating rubber duck, a show of our flair for breaking away from the pack and fusing the traditional with the uniquely modern. With the usual suspects accounted for, the show proceeded to reimagine our cityscape by reconstructing the Cultural Centre canvas through a multi-cultural look at Christmas. Spinifex, the team hired by the Hong Kong Tourism Board to create the ‘Pulse’ music and light shows, told Localiiz in an exclusive interview last week that they would transform the Cultural Centre and they delivered on their promise in a stunning display. Archways and ornate architectural touches added depth to the flat building face, quickly turning to a candy wonderland filled with gumballs and cupcakes, a sugary delight for any sweet-toothed viewers and as vibrant as our city’s energetic hum this holiday season. The audience was also treated to the world’s largest cuckoo clock, populated by toy soldiers and nutcrackers, as they marched to a steady beat of pulsing music.

The real treat came when the screen again transformed seamlessly to a toy playground. Rather than focus on contemporary games and characters, the Spinifex team featured nostalgic toys from the past century. By the time the show ended, smiles remained spread across the faces in the crowd. A sense of wonder was awakened, the kind not experienced since the days of writing a wish list to Santa and believing the jolly bearded man himself would read it. Christmas has arrived in Hong Kong.The stiff, mechanical movements of the toys were presented in seamless 3D, wobbling and marching across the Cultural Centre before turning to face the audience. Given Hong Kong's reputation for setting trends, it would be no surprise if children suddenly add vintage toys to their wish lists this Christmas. Click here for more information about 'Hong Kong Pulse'.