By Localiiz 28 May 2014
share:
May 28th 2014 Just a week after we posted this article about three Hong Kong snake attacks this month (one of which left a pet dog dead), Localiiz fan Gina Agresti sent us these unbelievable images. 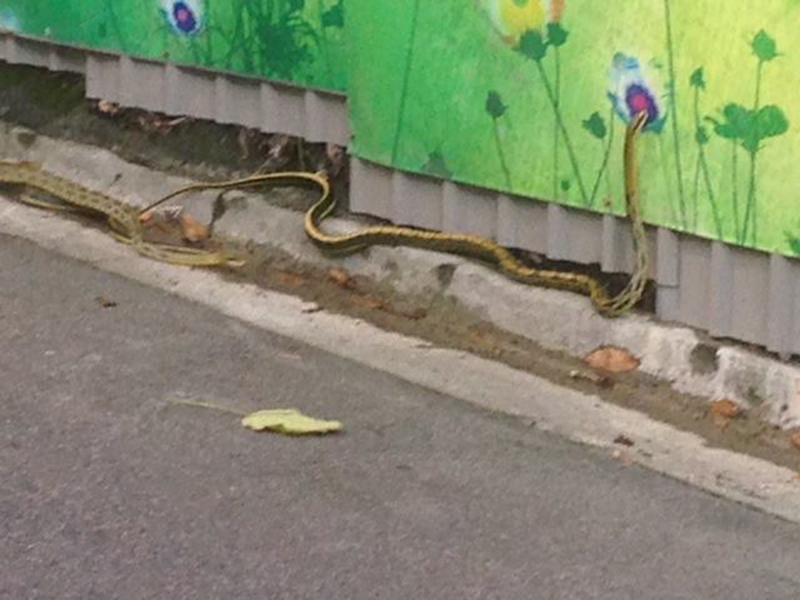 The slippery pair, apparently snapped on Hornsey Road in Mid Levels yesterday afternoon, were perhaps attracted to the painted meadow on the wall behind them - but where did they come from in the first place? Maybe they escaped from a Jungle Room in some banker’s penthouse? 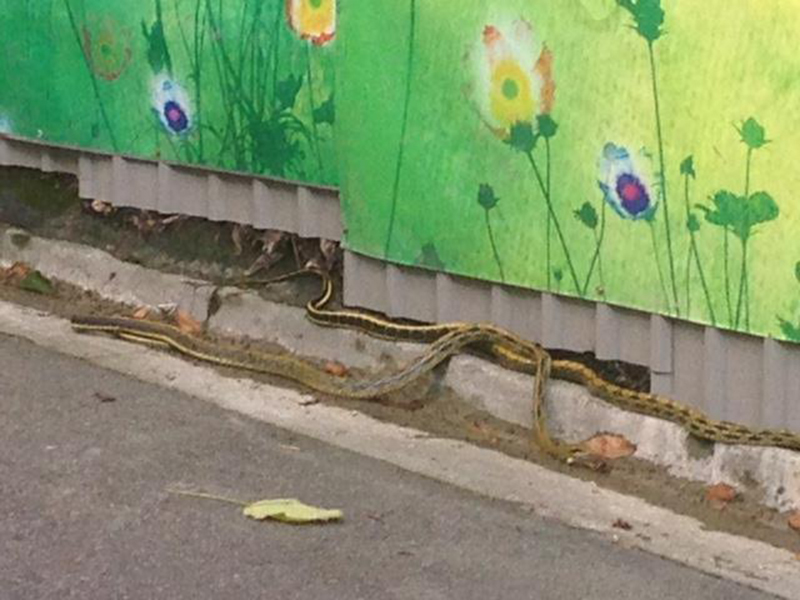 We’ve had a quick look on Google Images to try and figure out which snake family they belong too, but at the risk of sounding culturally insensitive, they all look the same to us. Any ideas?

The MTR's Newest Feature for Long Commutes May 21st 2014: Are you one of the less fortunate Hong Kong commuters that has to travel for more than an hour to get from home to work and vise-versa? Well don't fret, as it looks like one local has found a solution to your woes! On Monday night, this man decided to string a hammock across a compartment, taking his comfort into his own hands.

Sneaky Snakes: Hong Kong Suffers Three Burmese Python Attacks in Two Weeks May 19th 2014: It’s official – snakes are taking over the city! While snake spottings are not all that uncommon in Hong Kong, we were shocked to hear of three attacks in the past fortnight. Two attacks involved pet dogs in Sai Kung Country Park, and the other in the unlikely location of Quarry Bay Promenade.

Beneath the Wealth: Photographer Depicts the Reality of HK Homelessness May 27th 2014: Few who have spent a decent amount of time in Hong Kong will have failed to notice that behind the Rolls Royces and sea view mansions lies a desperate homeless population. With his Homeless in Hong Kong series, British photographer Charlie Eady hopes to expose a side of the city that is too often ignored.

Liquid Love: Innovative Photographer Puts HK’s Relationship with Water in Focus May 26th 2014: There’s no denying that Hong Kong’s skyline is the most iconic aesthetic of our city, but the single factor that led to the creation of such a spectacle is often ignored and unappreciated. We take a look at German photographer Andreas Müller-Pohle’s Hong Kong Waters project, and discuss both the value and the threat of the city’s greatest asset.

Pandamonia in Hong Kong: Must their Future be Black & White? May 22nd 2014: In less than three weeks’ time, Hong Kong will receive a mass Mainland invasion with a difference, as 1,600 paper-mache pandas march on the city. Part of the Pandas World Tour, this black and white brigade will sniff out their final stop at Soho’s PMQ, but not before a whirlwind tour of the city’s most famous landmarks.
To read more amazing articles on all things Hong Kong Click Here>