5 things that make ‘The Lion King’ an amazing musical

We are 100 percent sure we’re not the only ones whose eyes well up when we hear the iconic opening notes to Circle of Life from The Lion King. There’s just something incredibly touching and emotionally overwhelming about this musical—in the best possible way!—and even after 21 years of runtime and 25 global productions, The Lion King remains one of the world’s most beloved stage performances.

The very fact that the international tour of The Lion King will be in Hong Kong from 18 December onwards is one of the best Christmas presents ever. Due to overwhelming popularity, an additional eight shows have been added for our city, extending the Hong Kong leg of the tour until 12 January with a total of 31 shows.

In honour of this phenomenal piece of musical theatricality, we have compiled a list of things in The Lion King musical that absolutely has us shook. Prepare to get properly hyped up!

There’s a very good reason why The Lion King won a Tony and a Laurence Olivier Award for Best Costume Design. Julie Taymor’s ingenious creations are absolutely eye-catching, with perfect attention to detail. There is copious use of wood, beads, rope, and patterned textiles in warm earthy tones, with sudden splashes of colour that all cohesively pay tribute to the designs’ African roots.

The masks perched atop the principal characters’ heads are also stunning, each of them uniquely modelled on a single concept that sums up the character. For example, Mufasa’s mask is reminiscent of a halo because his ideograph is the sun, representing warmth, power, and a life-giving force. Mufasa and Scar’s masks can also be lowered and raised to give the impression of the lions lunging for each other in fight scenes.

There is also significant use of puppetry in The Lion King, in which Taymor collaborated with puppet and mask designer Michael Curry. We particularly like Zazu, a stand-out character in terms of costume, because the actor manipulating his puppet dresses like a butler as a nod to the hornbill’s overbearing role as king’s advisor. He’s also got tailcoats embellished with tail feathers, and a bowler hat inspired by British comedians of old. It’s little touches like these that make you truly appreciate the amount of thought that has gone into every single part of the production.

Despite the sheer beauty and artistry of these costumes, not a single actor’s face is hidden by a mask, so there are two sources of experiences from each character. It’s completely up to the audience to decide which part to focus on, and that’s a very novel concept.

We could really wax lyrical about how incredible the stages are set in The Lion King, but we’d rather not spoil the experience for first-timers, so just a couple of teasers about what you can expect to see.

The wildebeest stampede in the gorge is worth looking out for—its simple but hugely effective presentation uses clever illusions. The grasslands are represented by rows of actors dressed in straw-coloured rope skirts and grass bodices, balancing wooden platforms of grass on their heads. The actors are proudly visible even as part of the backdrop, but when the lions prowl through the “grass”, audiences can still be very much immersed in the believability of the scene.

The Pride Lands are really brought to blooming life with such innovative set designs. Even if you’ve already seen the musical multiple times as we have, you’ll still be blown away every single time. We only wish we could sprout two more pairs of eyes to see everything better with!

Almost every other Disney musical of the era was arranged by Alan Menken, with the exception of The Lion King, whose score was crafted by none other than the inimitable Hans Zimmer, the legend behind works such as Pirates of the Caribbean, The Dark Knight trilogy, and Gladiator. African composer Lebo M. then embellished it with traditional African singing, humming, chanting, and instrumental influences. The pair of them have truly created one of the greatest musical scores ever, and we’re not even just talking Disney here.

A great example comes towards the end of the musical when, after defeating Scar, Simba takes the long walk up Pride Rock to assume his throne. There’s a thunderstorm raging, the Pride Lands is in dire straits, and Simba is still coming to terms with vanquishing his uncle, but he puts on a strong face and chooses to lead his kingdom back to glory. The iconic music that hums and swells to a heart-wrenching crescendo during this scene is The King of Pride Rock (The Circle of Life Reprise), and there is nary a dry eye in the house as Simba roars in triumph and the story goes full circle. 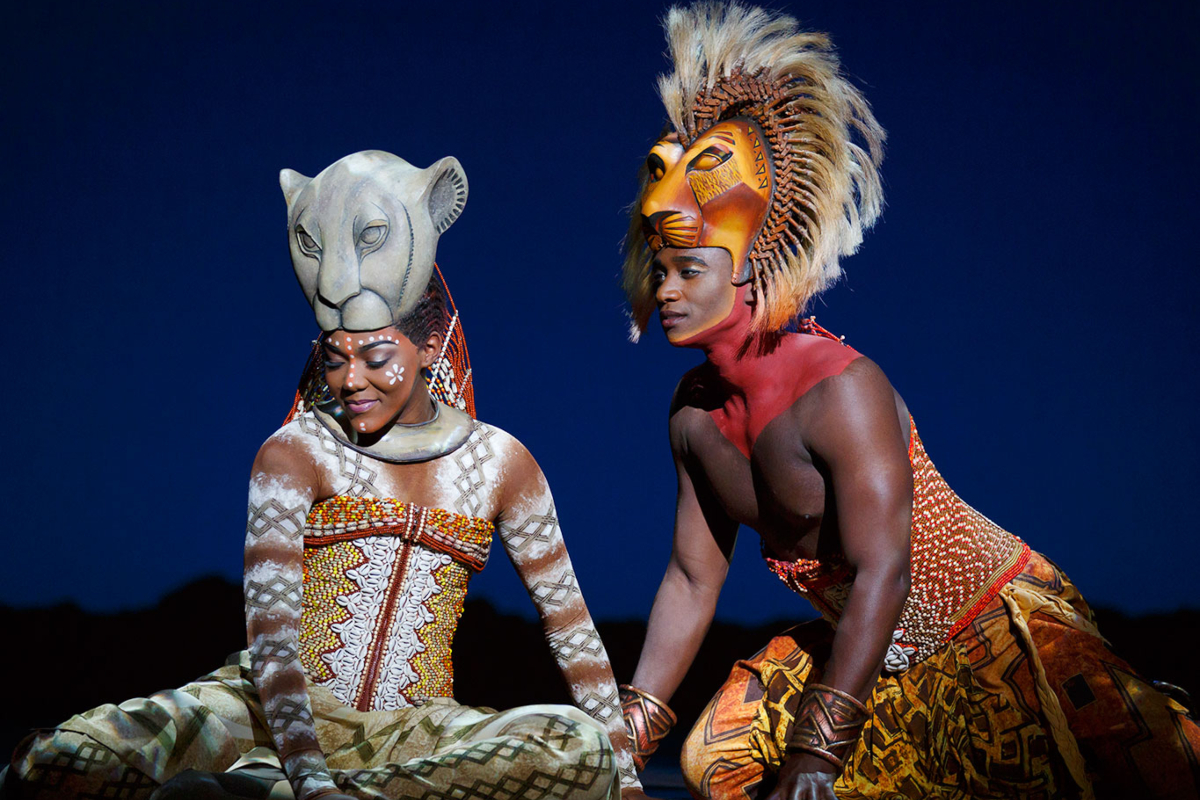 By now, it should be crystal clear that costumes, staging, and music have all been meticulously thought through, creating the perfect backdrop to the plot (which everyone already knows was inspired by Shakespeare’s Hamlet, right?). It is then the amazing cast who brings the whole thing to life in an uplifting tour-de-force. There is plenty of dancing in The Lion King and the whole cast is actively involved—the actor in stilts ambling around as a giraffe could come back in the next scene as a leaping gazelle. Because the characters portrayed are anthropomorphised animals, there is a huge difference between appearing onstage as a human and doing a dance number, and having to dance in a convincingly animal-like way.

The producers specifically cast actors who can move well and really be able to inhabit the costumes and puppets, which takes a lot of time and practice. This painstaking effort all comes to a head when the show opens with a procession of all the animals, and by the time it wraps up at the end of the night with everyone back at Pride Rock, you’ll be absolutely convinced there is some sort of magic at work melding the talented cast together with the very characters they inhabit. 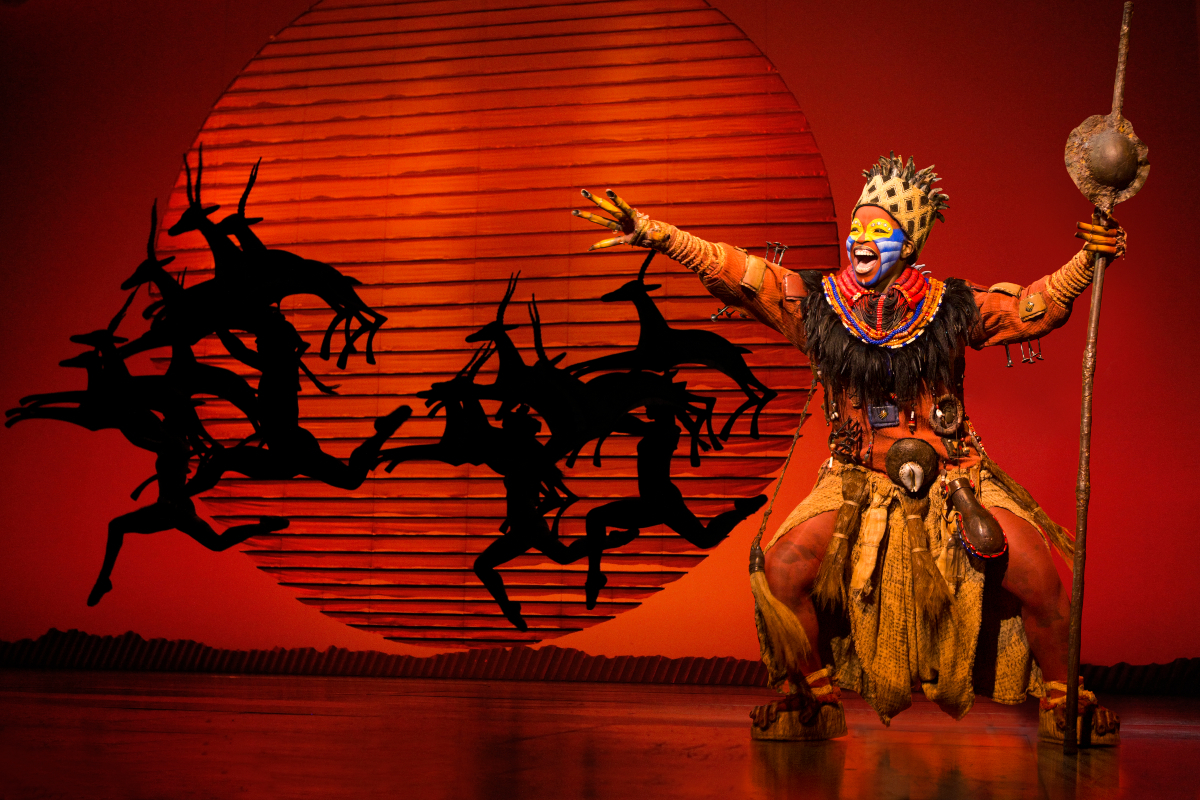 Storytime: the first time we saw the musical in West End years ago, we burst into tears when the stage lit up with the sunrise background and Rafiki started belting out the opening number. The same thing happened when we saw the Broadway version, and an elderly gentleman in the next seat handed us a tissue and whispered, “I know how you feel.”

It must be universally agreed upon that the musical performances are the absolute heart and soul of The Lion King. We love that the nameless narrator who sings Circle of Life in the original animated film has been merged with the character of Rafiki, who was then changed to become female in the stage production. Most of the songs are sung either partially or entirely in various African languages; for example, the chants in the track Rafiki Mourns were written by Tsidii Le Loka, who originated the role of Rafiki on Broadway.

Prepare to be blown away by the live performances of all your favourite songs from the film, including the high-energy I Just Can’t Wait to Be King, the short but iconic comedic number The Lion Sleeps Tonight, and of course, the breathtaking Circle of Life, which, when paired with Rafiki’s stunning vocals and the procession of all the animals, elicits a visceral and emotional reaction from anyone who hears it.

Let’s also not forget the original songs written for the musical. We must confess that we’re not normally fans of new additions to already great soundtracks—because they usually fail to match up to the standard of the original tracks (we’re looking at you, Suddenly from the 2012 film adaptation of Les Misérables)—but The Lion King’s new songs are amazing in their own right. Our absolute favourite is He Lives in You. While not in the original film, this song was arranged by Lebo M. and released on Rhythm of the Pridelands, an album inspired by The Lion King, and was later used in The Lion King II: Simba’s Pride, as well as the onstage production. It is a deeply spiritual track with themes of ancestry and history. Combined with the scenes it’s in, is one of the musical’s most moving pieces. 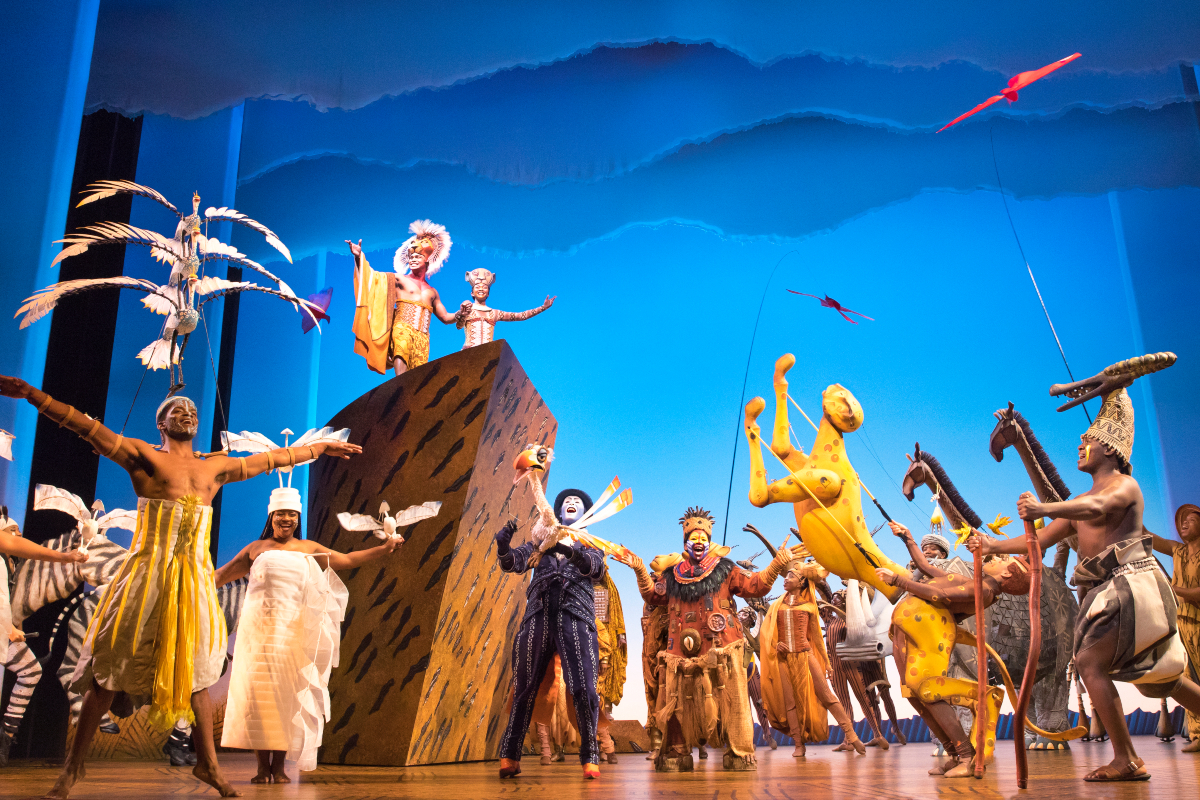 Are you as excited as we are to see the musical for yourself? The Lion King is truly a one-of-a-kind production that deserves to be experienced at least once. With Hong Kong’s season being extended, you still have a chance of snagging tickets to this phenomenal musical that the entire family will enjoy.

Tickets are priced starting from $399, with packages available for bookings in multiples of four, so they’re selling out fast. Student tickets, special VIP, and corporate hospitality packages are also available. Click here to secure your tickets now, and be connected in the great circle of life!

The Lion King will be running from December 18 to January 12 at the AsiaWorld-Expo Arena.