It's Nap Time: Photographer Captures the Tired Side of Hong Kong


One of Hong Kong's major undisputed facts is that our workforce is overworked and always tired. One Hong Kong photographer, Edward Ng Ka Lok, made it his mission to document the tired eyes and minds of the fragrant harbour.

While his theme is unconventional, it delightfully represents street life in Hong Kong. "I think people are so tired in this city, and having a nap is a good idea. Maybe their dreams will come true after it," Ng tells Localiiz.

As an amateur photographer, he hopes to expand on this theme as he furthers his skill in photography. Ng challenges himself by eschewing digital technology, shooting with only black and white film. He believes that the expensive cost of film forces him to put more time into his thought process before pressing the shutter. "I think black and white is good enough to freeze a moment. Sometimes colours create noise in an image," Ng explains. In the case of his napping theme, we definitely appreciate his stylistic choice - it just makes each nap look that much more blissful!

Here are some photographs from this series. Click through to see them all: 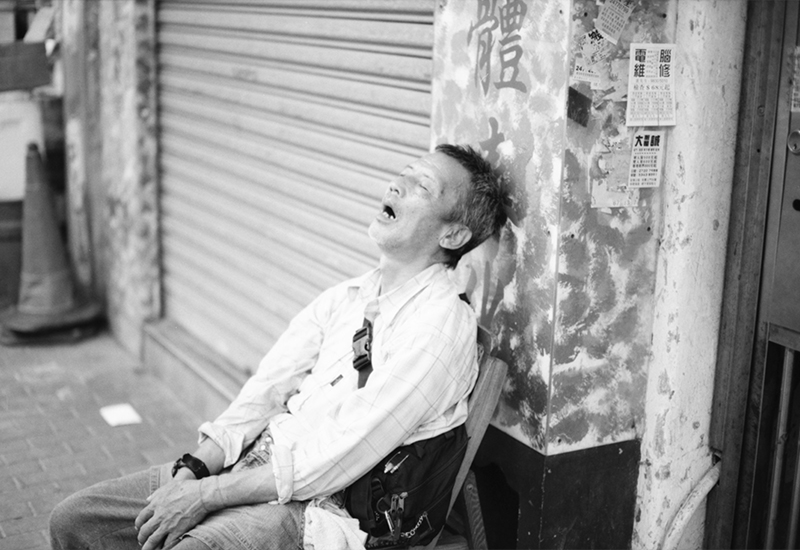 Ng looks to feature another aspect of Hong Kong living in his next series called 'Maid's Weekend' where he will focus on the weekend life of overseas housemaids in the city. "They usually live in their employer's residence, and only have their private life during the weekend. I would like to capture another face of them," Ng tells Localiiz. We're definitely looking forward to seeing his artistic and positive outlook on this Hong Kong demographic.

Be sure to check out the rest of his wonderful Hong Kong film photography on his Facebook page, Camera Eyes.