Walk down Gough Street or Stanley Street at lunchtime and you will see the pavement packed with tables of chattering patrons stuffing their mouths with aromatic pieces of meat from still-steaming plates and chefs manoeuvring giant metal woks full of rice, vegetables, or noodles as if they weigh nothing.

The heat of the open stove creeps towards you, enveloping you with a most inviting savour as your stomach begins to grumble. The familiar refrain of “Handsome boy / pretty girl, what would you like to eat?” (靚仔／靚女食咩呀; leng3 zai2 / leng3 neoi5 sik6 me1 aa1) rings loud from the staff as every potential customer passes by the stall, followed by a fervent introduction of their respective shop’s signature dishes. It is noisy; it is grimy; it is the most unique and delicious experience in Hong Kong: the dai pai dong, the iconic open-air food stall.

Characterised by the green-painted steel kitchen walls, the cacophonous din surrounding the stalls, as well as the heat of the streets and the kitchens themselves, the dai pai dong is simultaneously a hygiene hazard and a precious vestige in every Hongkonger’s memory. Here’s a look into how it all got started. 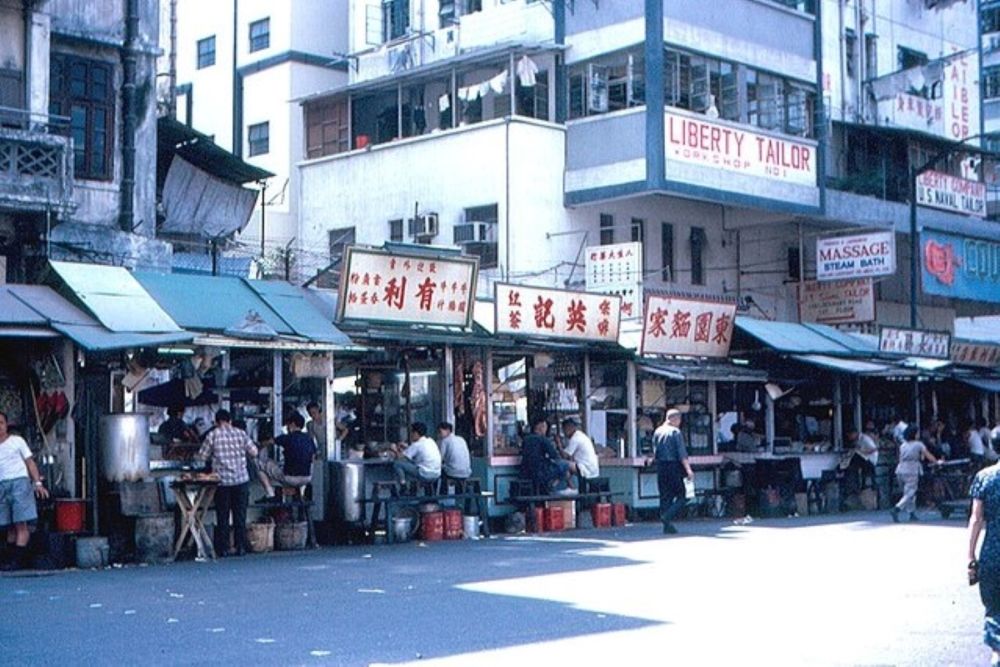 In the late nineteenth century, unlicensed food stalls sprouted across Hong Kong Island. Soon after, the colonial government began issuing ad hoc “cooked food licences” to help families of injured or deceased civil servants stand on their feet. Compared to the smaller licences issued to mobile food vendors, the licence for food stalls in fixed locations was physically bigger so that it could accommodate a photo of the licence holder and be displayed prominently in the stall as required by the government. Thus, these distinctive food stalls became known as 大牌檔 (daai6 paai4 dong3), which literally translates to “big licence stall.”

Interestingly, dai pai dong is also commonly written as 大排檔, which is pronounced the same way but means “big stalls in a row,” because of the arrangement of the stalls and their use of long benches as seats in the early days. Fun fact: the term “dai pai dong” was officially added to the Oxford English Dictionary in March 2016! 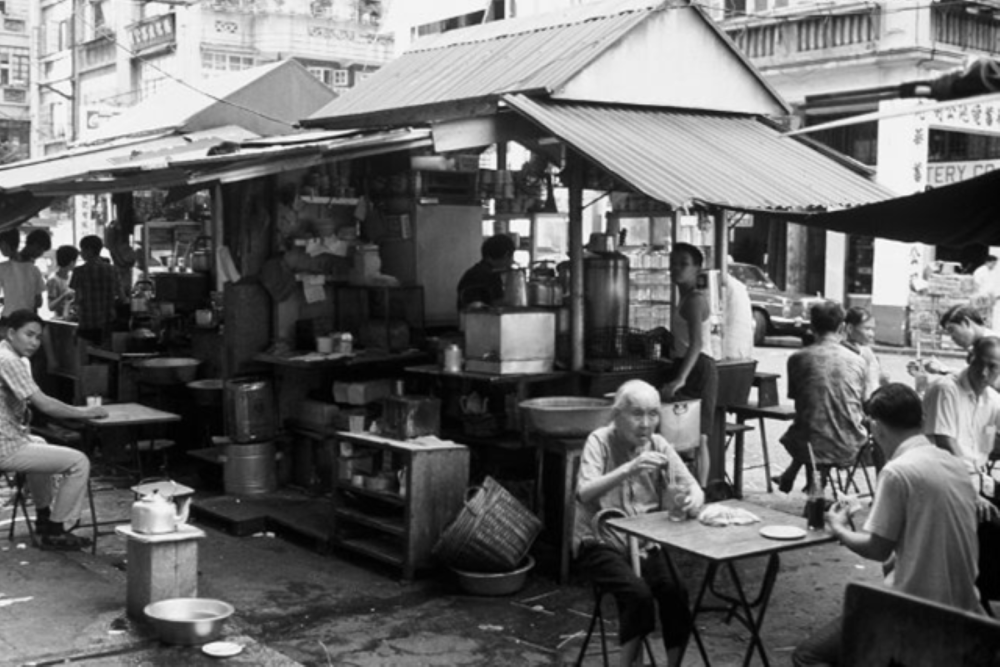 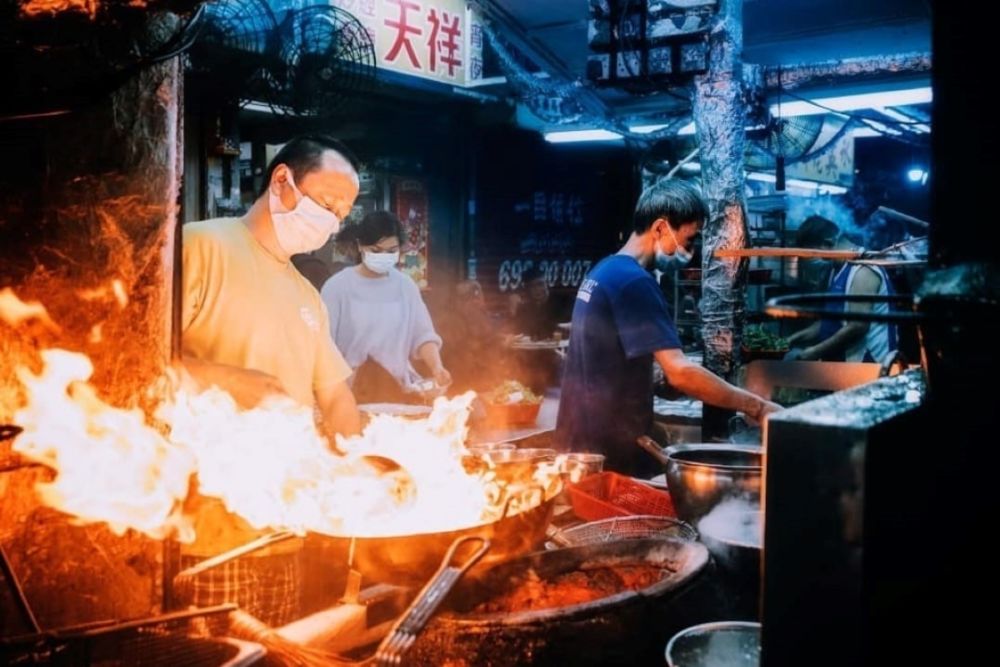 Accessible locations on the roadside, cheap but delicious food, varied and flexible menus, and an easy, no-frills atmosphere—these attributes instantly made the dai pai dong a beloved dining option among the working class in Hong Kong. Because of the lack of etiquette or tidiness, the stalls soon became associated with Cantonese slang such as 地踎 (dei6 mau1; “squatting on the floor”) and 麻甩 (maa4 lat1; describing someone who looks scruffy). Be it a large group of friends or a couple, people would walk into a dai pai dong in casual clothes for good food and an escape from daily stress. 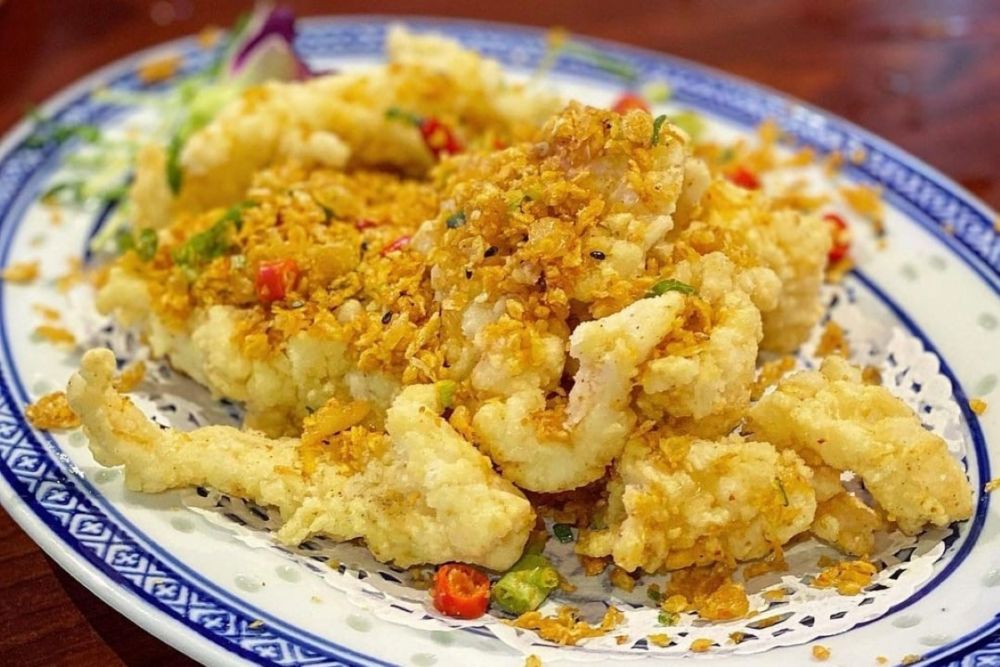 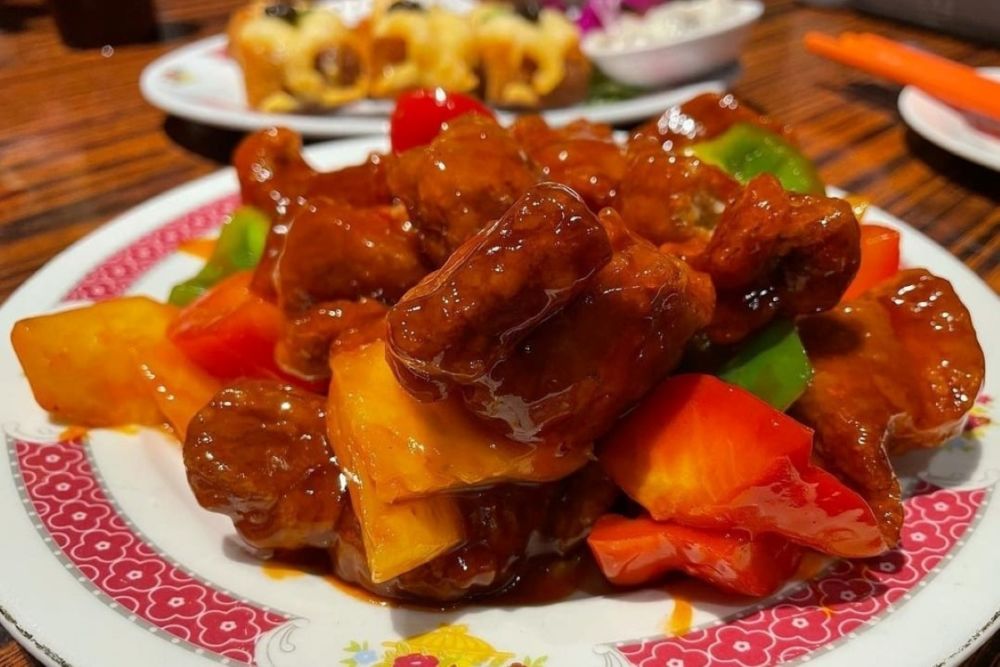 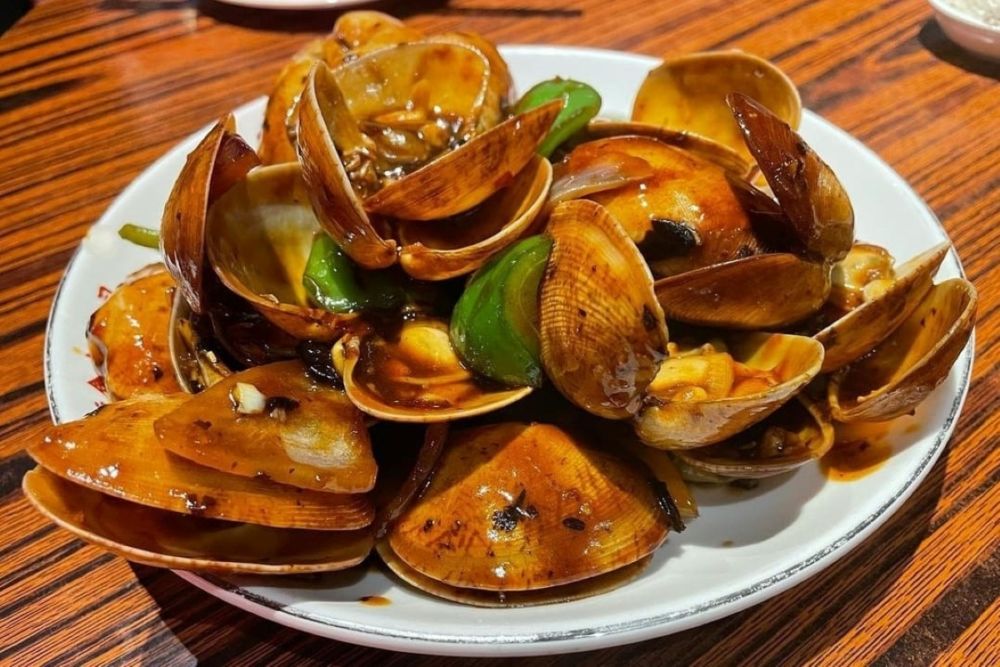 Dai pai dongs offer many different specialities, from congee, noodles, and siu mei to seafood and hot and cold Chiuchow dishes (collectively known as 打冷; daa2 laang1) at night. Some quintessential dishes include salt and pepper squid (椒鹽鮮魷; ziu1 jim4 sin1 jau4), sweet and sour pork (咕嚕肉; gu1 lou1 juk6), and stir-fried clams with black bean & chilli sauce (豉椒炒蜆; si6 ziu1 caau2 hin2)—all of which are marked with the signature wok hei (鑊氣; “breath of the wok”), an elusive but cherished marriage of fragrance and flavour that is a pillar of Cantonese cuisine. This alchemy of flavour requires high heat, a well-seasoned wok, and an experienced chef who knows how to wield it; it is considered one of the most demanding and essential skills in Cantonese cooking.

Surrounded by joyful clamours and the piquant wok hei, dai pai dong patrons often sit and chat with neighbouring customers and waiters until midnight, often with the help of some ice-cold beer to keep things going. Permeated with the fragrance of food and the personal touch of neighbourly affection (人情味; jan4 cing4 mei6), dai pai dong has become a fixture in the Hong Kong collective memory. 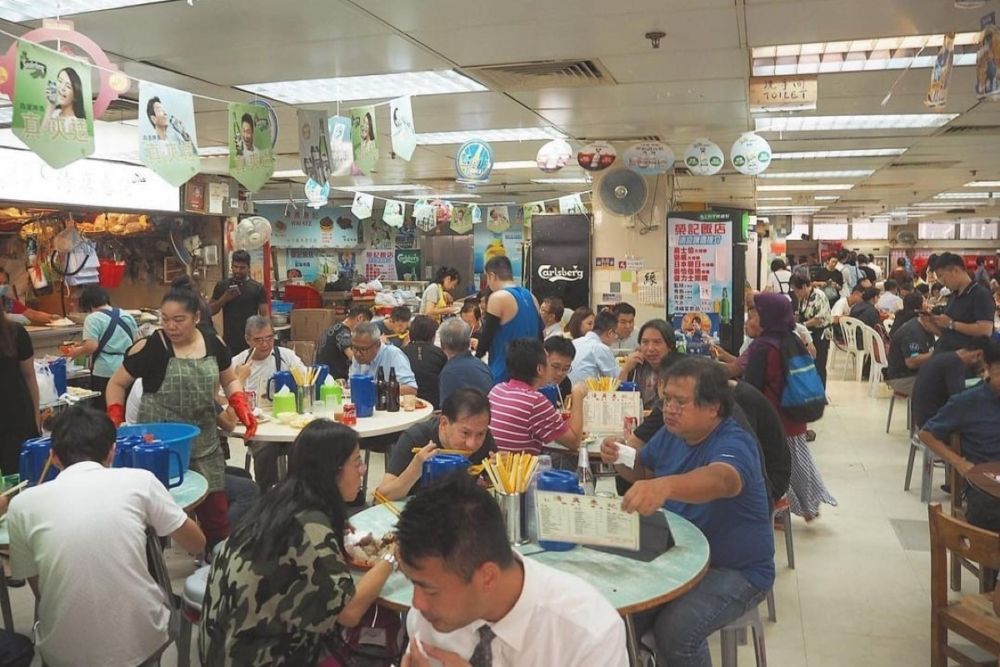 After the government began issuing licences in the 1940s, there was a surge of dai pai dongs across Hong Kong, counting up to 200 at one point. But the food stalls also caused severe pollution and disturbances to the neighbourhoods they resided in, filling up the streets with loud crowds and smell of unventilated cooking smells until midnight. The stalls would also block the road, often causing traffic jams.

The need for control was imminent, thus the government stopped issuing “big licences” in the 1950s and limited the transfer of the licence to only spouses. This led to the rapid decline of dai pai dongs thereafter, as the licences could not be passed down. They could only be left to expire, dying with their original owners.

In the 1970s, the government tried to further reduce the population of streetside dai pai dongs by inviting owners to either move into cooked food centres located above wet markets or return their licences for compensation. 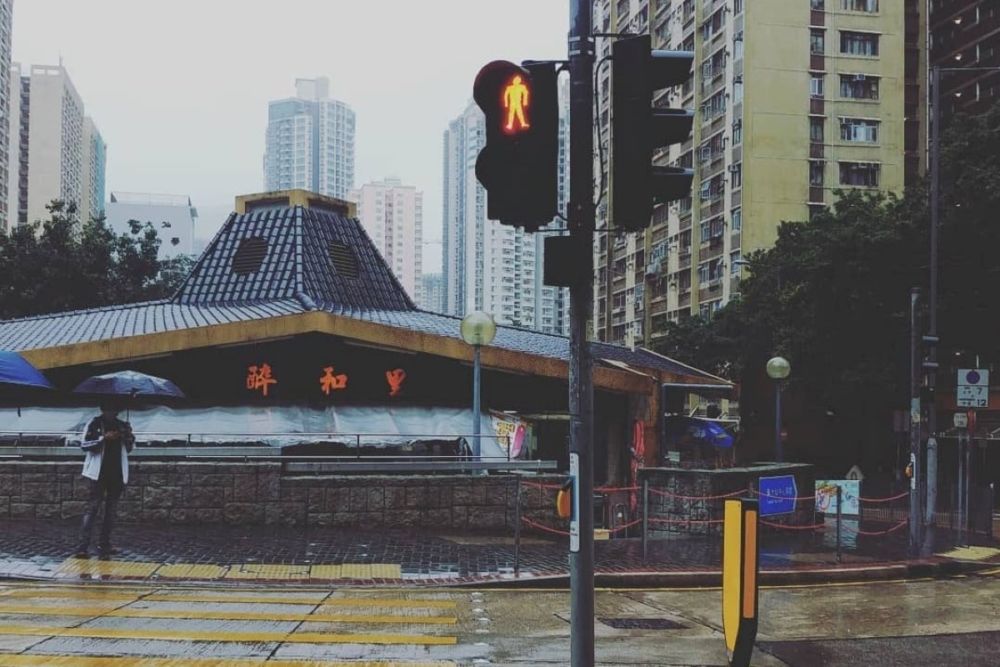 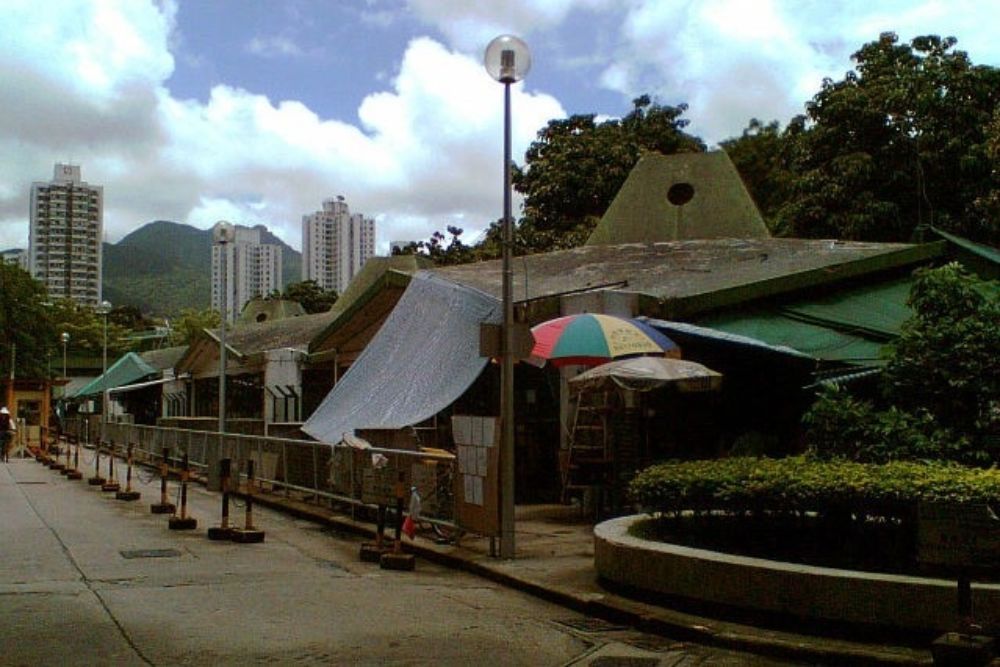 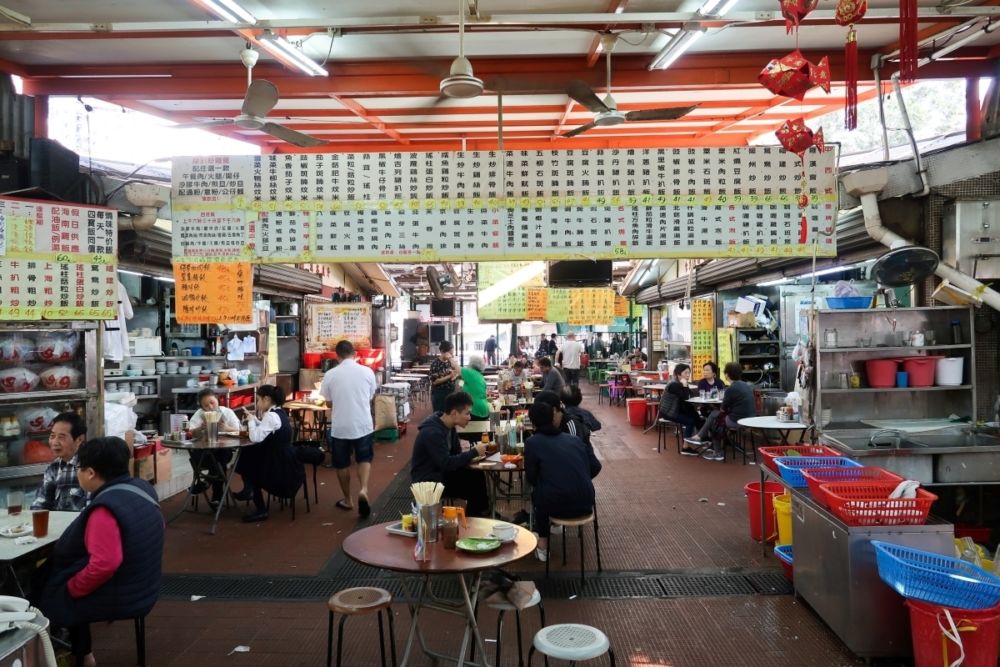 Inside a mushroom kiosk. Photo: Wpcpey (via Wikimedia Commons) 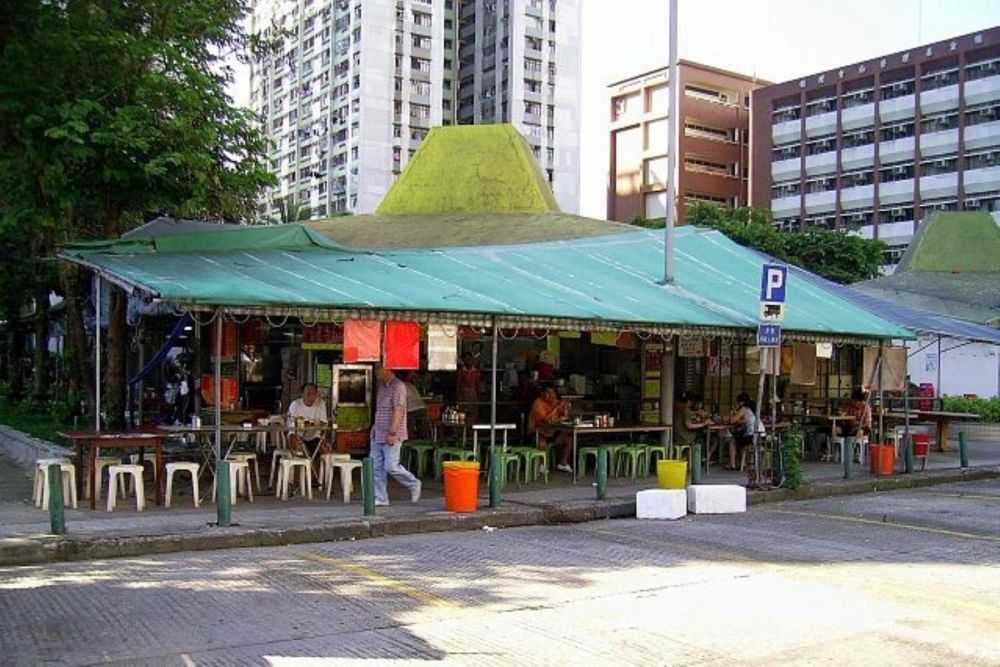 The “rice” of a new phenomenon

While some stalls relocated to cooked food centres in municipal buildings, the government also built another kind of food centre in public estates, colloquially known as the “mushroom kiosk” (冬菇亭; dung1 gu1 ting4) because of its mushroom-shaped roof. Housing several dai pai dongs at a time, mushroom kiosks are a considerable improvement from the street stalls, built with sturdy roofs and better ventilation systems, as opposed to the old stalls’ open fronts and unbearable heat. As the street stalls began to dissipate, the mushroom kiosks took their place as the new face of the dai pai dong culture.

After two decades, however, the Housing Department stopped building mushrooms kiosks, and developers have implemented the “one kiosk one stall” policy, stating that every mushroom kiosk could only be inhabited by one restaurant. But as many dai pai dongs were family businesses, it was impossible for them to afford the rent of the entire kiosk, so a creative solution arose in Lower Wong Tai Sin Estate—three restaurants rent a kiosk together and take turns running it every day. The three restaurants—Chui Kee (醉記; zeoi3 gei3), Sam Wo (三和; saam1 wo4), and Lee Hing (利興; lei6 hing1)—conjoined, took one word from each of their original names, and rebranded the kiosk as Chui Wo Lee (醉和里; zeoi3 wo4 lei5), and choosing the fitting new English name “Together.” Till now, Chui Wo Lee is one of the remaining few and most renowned mushroom kiosks in Hong Kong. 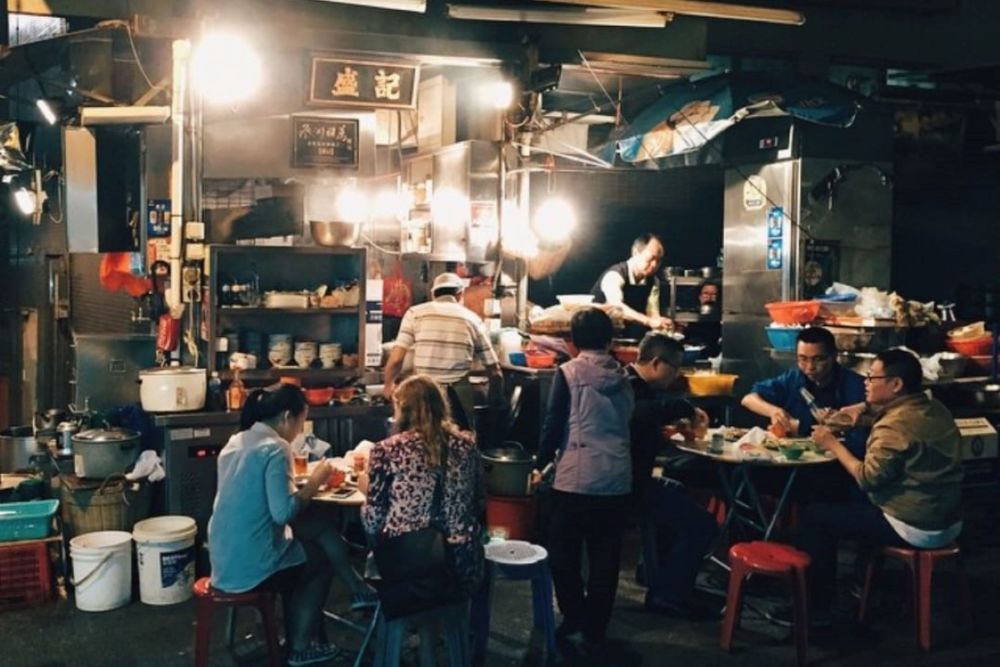 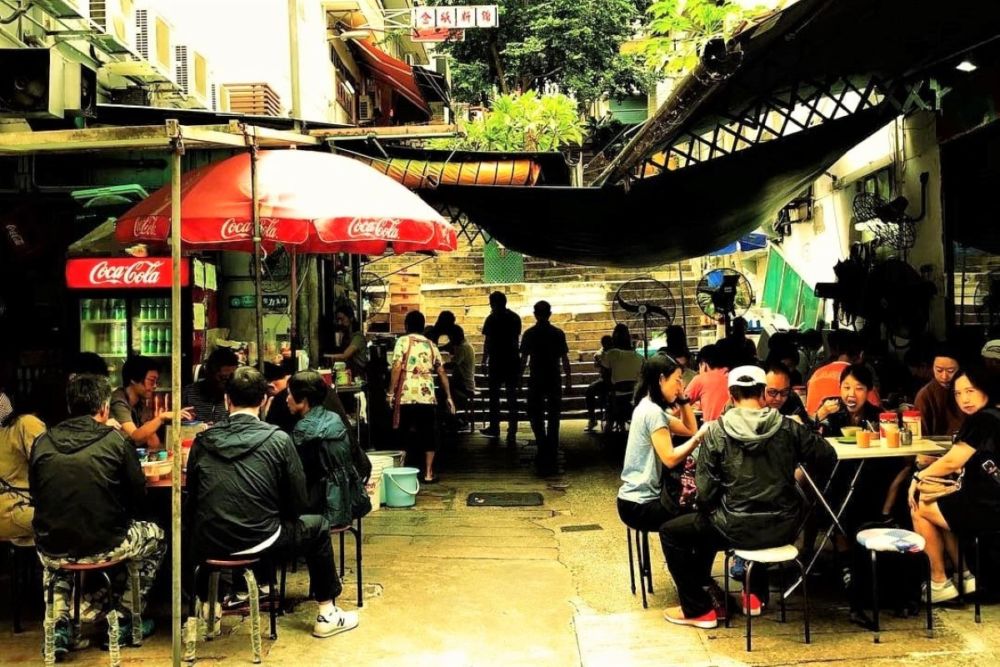 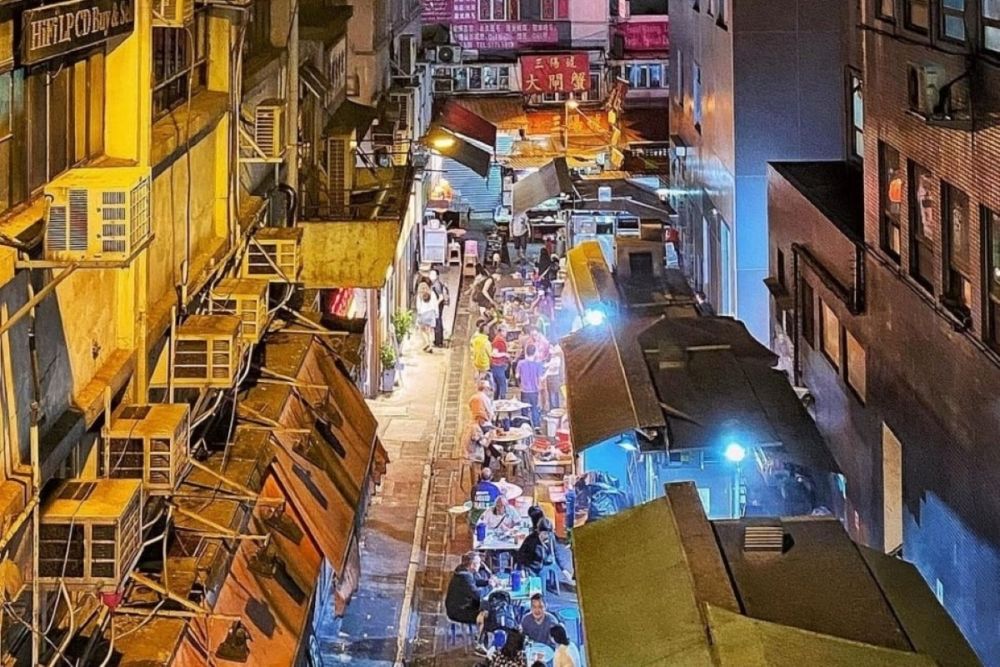 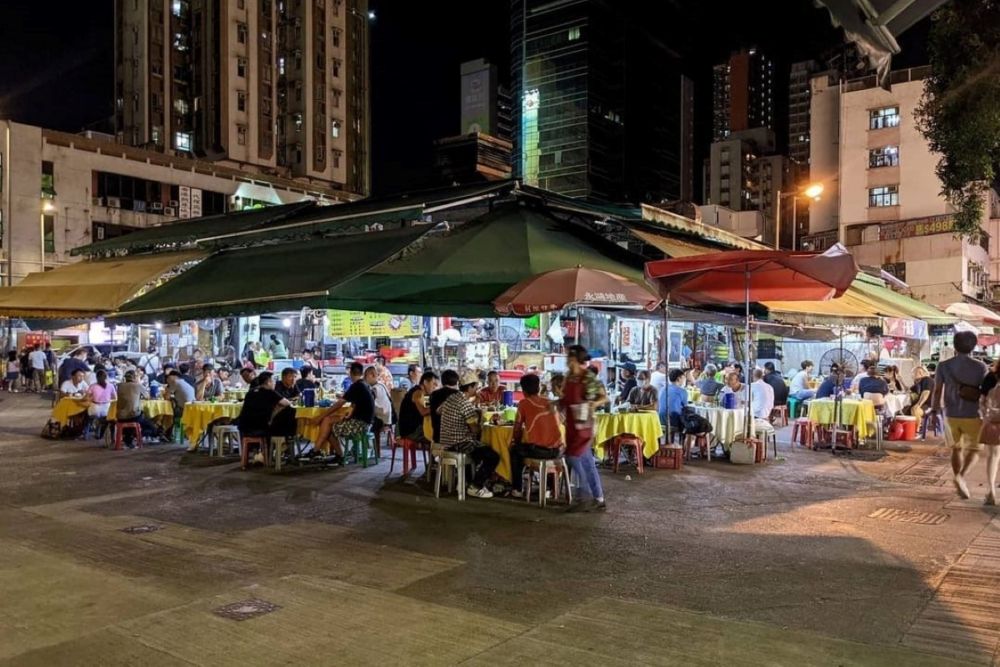 Running small businesses in the expensive city of Hong Kong is difficult. As more and more owners retire and licences expire, the number of street-side dai pai dongs has dwindled down from 200 to around 25, mostly located in Central and Sham Shui Po. Mushroom kiosks in public estates are also being removed, as they are still considered a public health risk. However, despite all the sanitation concerns and the government’s efforts to eradicate the street stalls, dai pai dongs have remained a favourite in Hongkongers’ hearts.

To this day, many office workers run to their nearest dai pai dong for a quick, cheap, delicious lunch. Elderly people travel from their homes to existing street-side dai pai dongs for a taste of the good old days. Parents would bring their children to the mushroom kiosks they grew up eating at to pass on the vanishing memory. 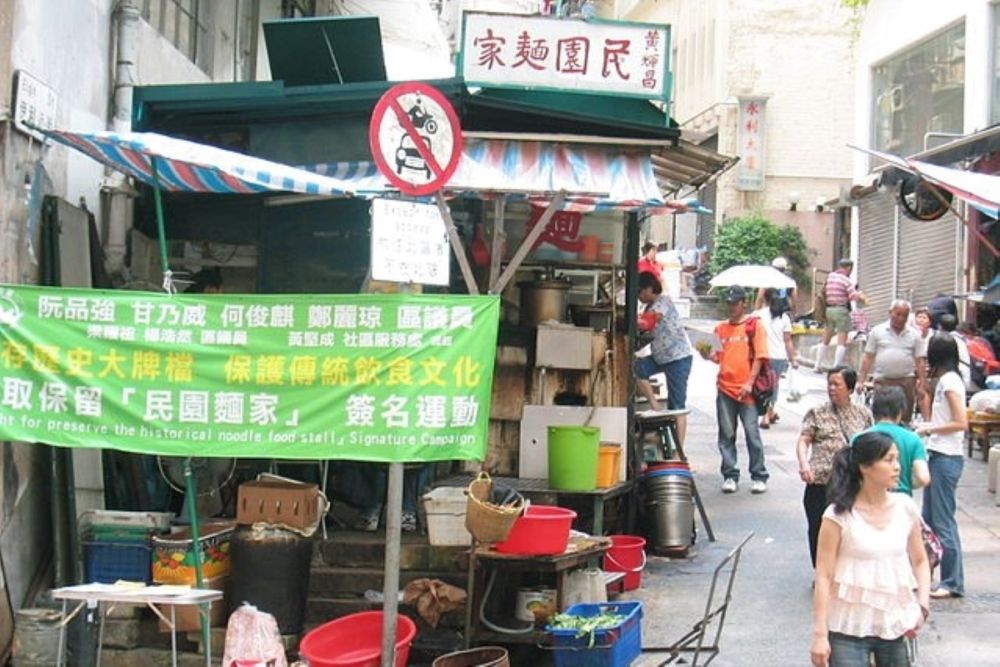 In 2005, Man Yuen Noodles (民園麵家), a historic dai pai dong established in the early twentieth century, could not continue the business because of the passing of the owner. The closing of the old stall caught the attention of public and legislative councillors, who demanded the preservation of street-side dai pai dongs.

In light of the issue, the Hong Kong government has started to look into improving old dai pai dong stalls, loosening up the inheritance rules of the current licences, and issuing new “big licences.” Now, we can only hope that the street stalls and mushroom kiosks can be saved before they completely fizzle out in history. While you still can, visit these dai pai dongs to get an authentic Hong Kong taste.

Mushroom kiosks that are still running: 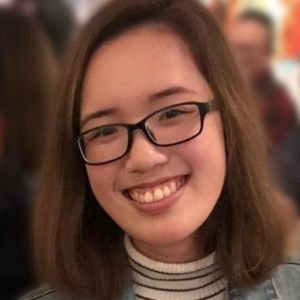 New Restaurants: Where to eat and drink in Hong Kong (July 2022)

New Restaurants: Where to eat and drink in Hong Kong 2022