6 places to find the best poké bowls in Hong Kong

Among the raw fish dishes of the world—sashimi, ceviche, kinilaw, yusheng, and beyond—there’s none quite as contentious as poké. Poké (pronounced “po-kay”), meaning “to cut crosswise,” humbly originated as an at-sea snack: Dicing up fresh-caught reef fish and tossing the chunks with sea salt, kukui nuts, seaweed, and brown algae called limu, native Hawaiian fishermen created the prototypical poké.

Over time, the preferences of diverse Asian immigrants, particularly Japanese, pushed ahi tuna, marlin, and cured octopus to become the preeminent proteins, while condiments like soy sauce, sesame oil, green onions, and chillies lent new dimensions of flavour. Tumbled onto a mound of fluffy medium-grain rice, poké transformed into the iconic expression of the Aloha Spirit that it is today.

Since its popularity exploded off the island, impassioned debates about authenticity and appropriation have frequently centred on poké. Homesick Hawaiians assert that once you leave the Aloha State, where local supermarkets sell dozens of varieties drawing on indigenous and adapted foodways alike, it’s almost impossible to land on decent poké—especially without the pretences of the Instagram age.

While we don’t recommend hunting for poké at your nearest ParknShop or Wellcome, there are a few but formidable options for Hongkongers eager for a taste of Hawaii. Whether you believe kale and pineapple belong in your bowl or you self-identify as a loyal poké purist, here’s where to find poké in Hong Kong. 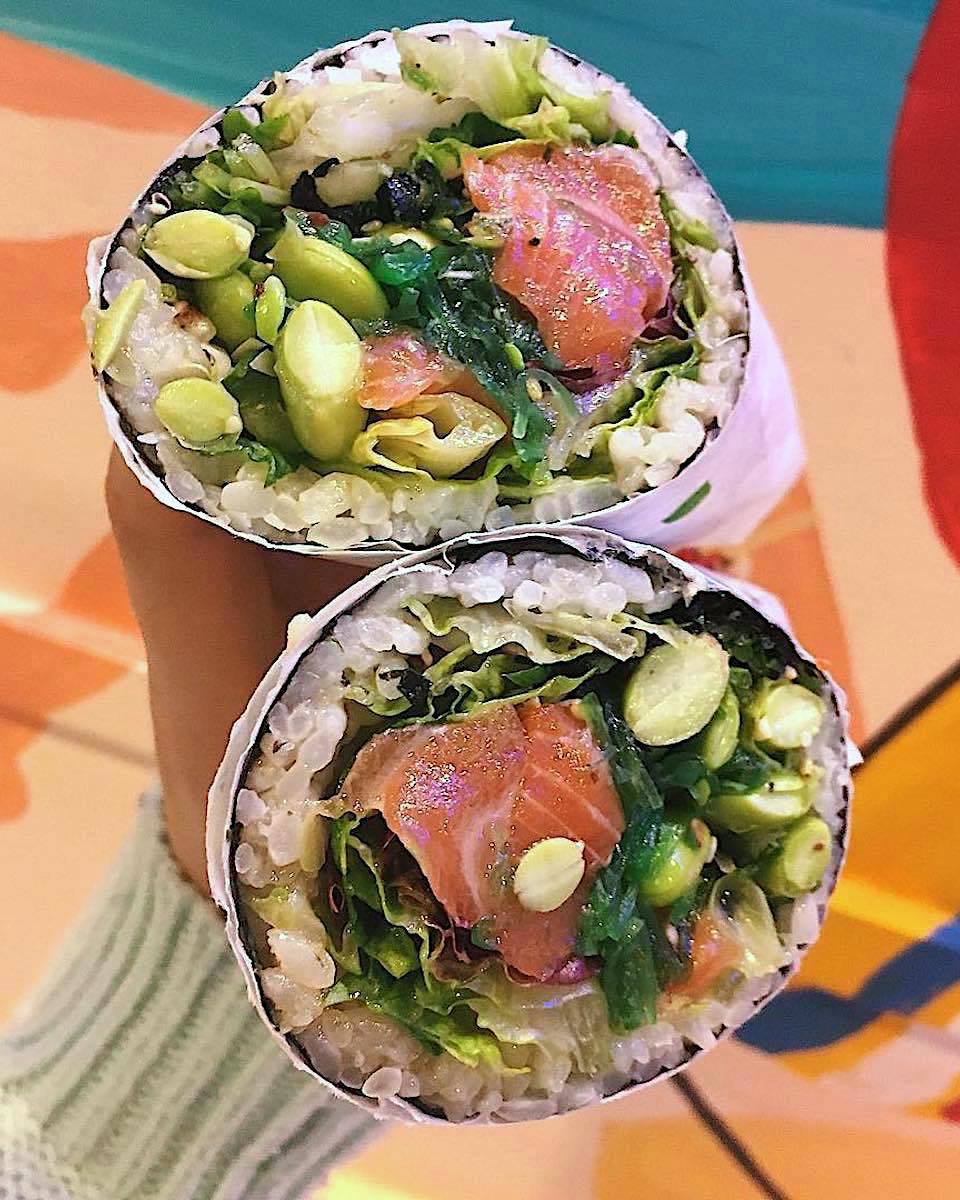 Chipotle, but make it food-safe and fishy—that’s Pokéworld for you. A popular takeaway lunch option with outposts in major business districts of Hong Kong Island and Kowloon, Pokéworld takes the build-it-yourself approach to the extreme.

Not ideal for the easily decision-fatigued, your poké bowl is infinitely customisable here. Choose more orthodox bases like rice and salad, or opt for the Pokiritto ($89), a sushi burrito-esque design that taps right into the zeitgeist of loosely Asian-inspired fusion food. With proteins like smoked chicken, tofu, and chickpea available, your options are as wild, varied, and diet-friendly as can be.

The spectrum of toppings transports Pokéworld to glorified salad bar territory—there are more than 15 on offer, from pineapple to poached egg and edamame to asparagus. Skip the lunch queues and get your hyper-personalised bowl through Foodpanda or Deliveroo. 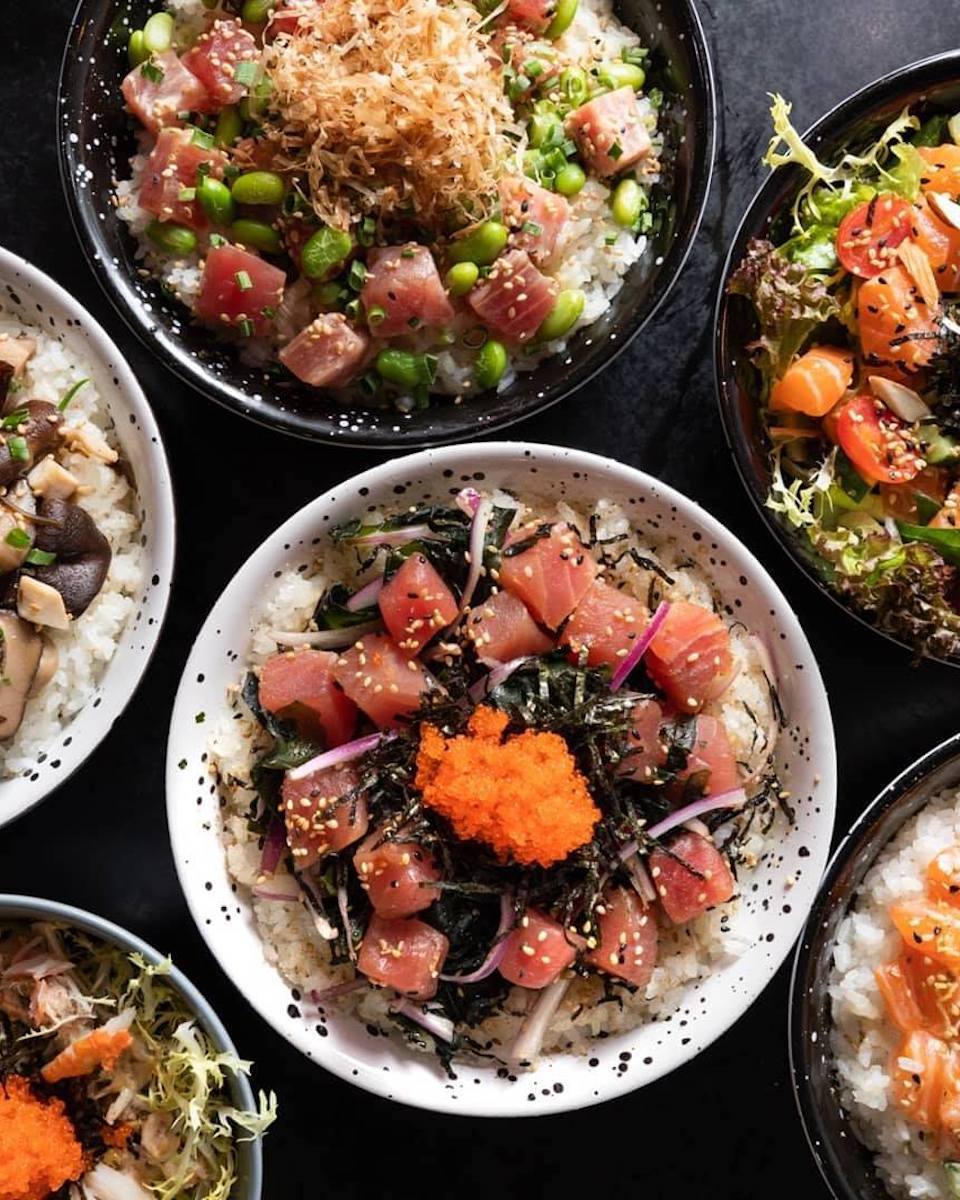 Billed as the first poké place to open up in Causeway Bay, POKE HK is all about the self-built bowl—available for takeaway or through Deliveroo. With tuna, salmon, octopus, and beech mushrooms as your protein options, nearly 20 toppings, and six different sauces with either a creamy mayo or soy base to choose from, there’s plenty of leeways to truly make your bowl your own.

If you’d rather leave the mixing and matching to the experts, there are a few improvised house bowls that lean a lot more towards seafood salad than poké proper, like the Poh-Keh ($88), which comes with tuna over sushi rice, or the kaisendon-like California ($98), featuring nubs of salmon crowned with shredded eggs and salmon roe. Pair your healthful meal with the maybe-misplaced-yet-curiously-tasty sweet potato fries ($28), served with a side of wasabi yoghurt. As for Instagram-perfection, the little rainbow-toned neon marquee seals the deal. 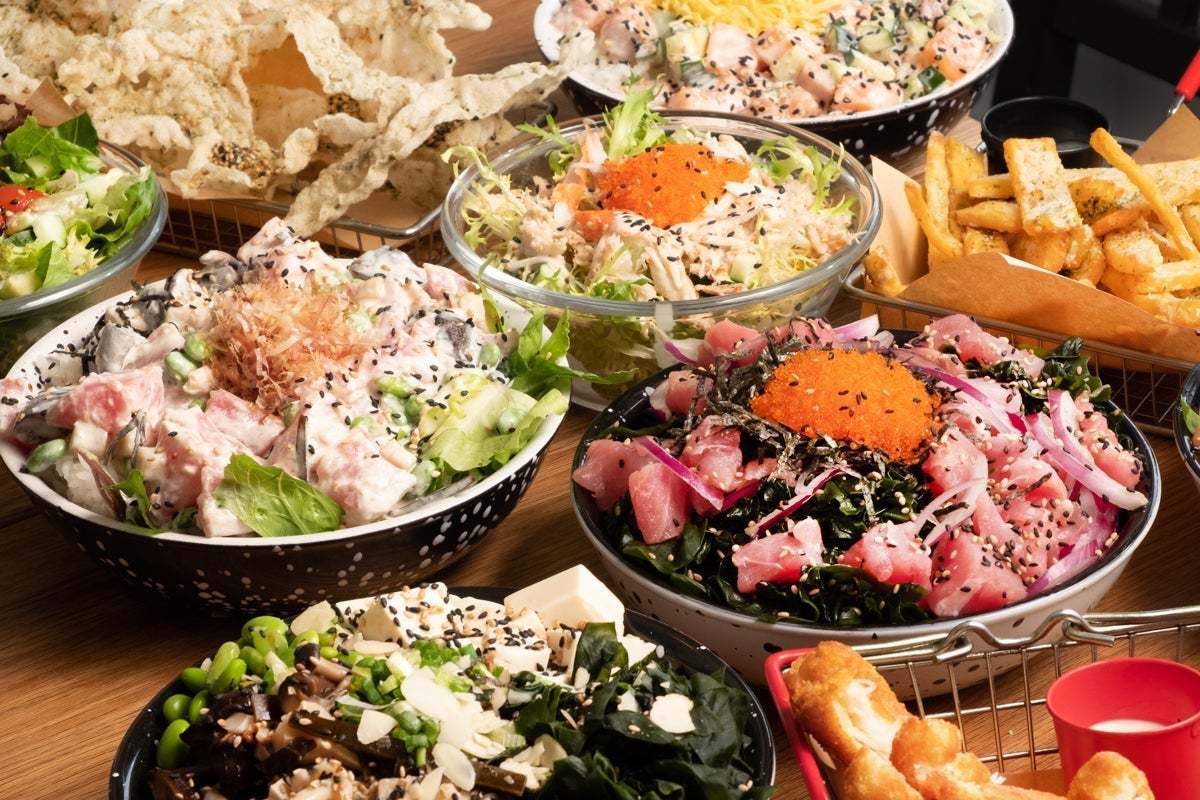 Not only is Peek-a-Poke located less than a minute away from Poke HK, but the menu here is also practically identical. The signature bowls span comparable offerings with passable combinations of fish and toppings. Just like at Poke HK, The Vegan ($78) presents sides like tofu and edamame with beech mushrooms for those going the plant-based route—you’ll find no mock meats here.

One key distinction, however, is that Peek-a-Poke has slightly more seating space to cater to dine-in customers. Usually overflowing with patrons during lunch hours, the narrow dining area attempts to channel island vibes with fishing nets, kayaks, and paddles adorning the walls. To sidestep the crowds, give Peek-a-Poke a try through Deliveroo, Foodpanda, or Uber Eats.

8 places to find the best kaya toast in Hong ... 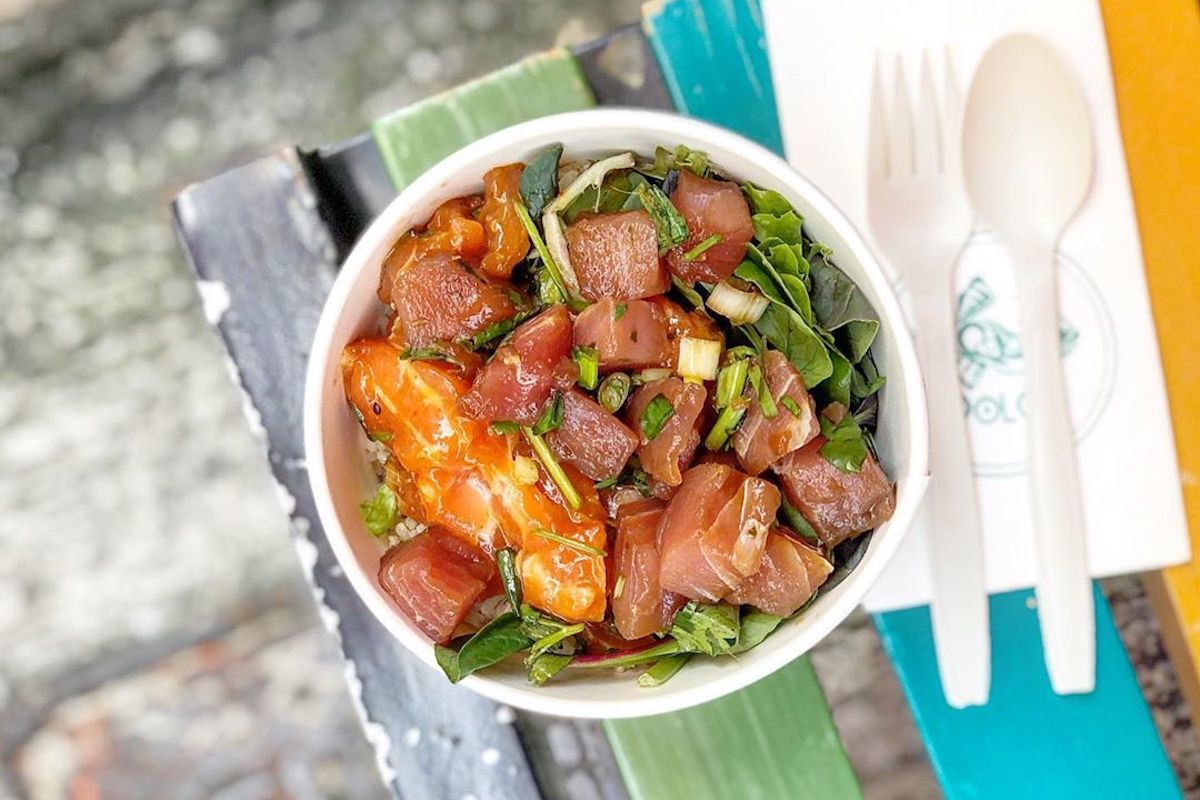 Pololi is your best bet for premium poké nearly 10,000 kilometres away from Poké Paradise. What sets Pololi apart from the rest is their more traditional process: Chunks of sashimi-grade fish—with tuna, salmon, and marlin to pick from—are marinated before making their way to your bowl. Crucially, this contributes to a meal that feels more purposefully constructed; rather than coming across as a slapdash assortment of ingredients, the flavours are cohesive and complement each other with every bite.

Bowls at Pololi range from classic to quirky, where you can choose your base, dressing, and desired poké. Their offshoot brand, Kai by Pololi, does allow you to build your own for a more modern and customisable approach. Delicious and revelatory, Da Hawaiian Kine ($98)—in which slivered alliums and earthy kukui nut meat meet ragged cubes of blushing tuna, glossy with sesame oil and chilli—eats like an exploration of Hawaiian terroir. Through Deliveroo, you can order bowls of your creation or frozen ahi tuna packs for when you’re pining for poké at home. 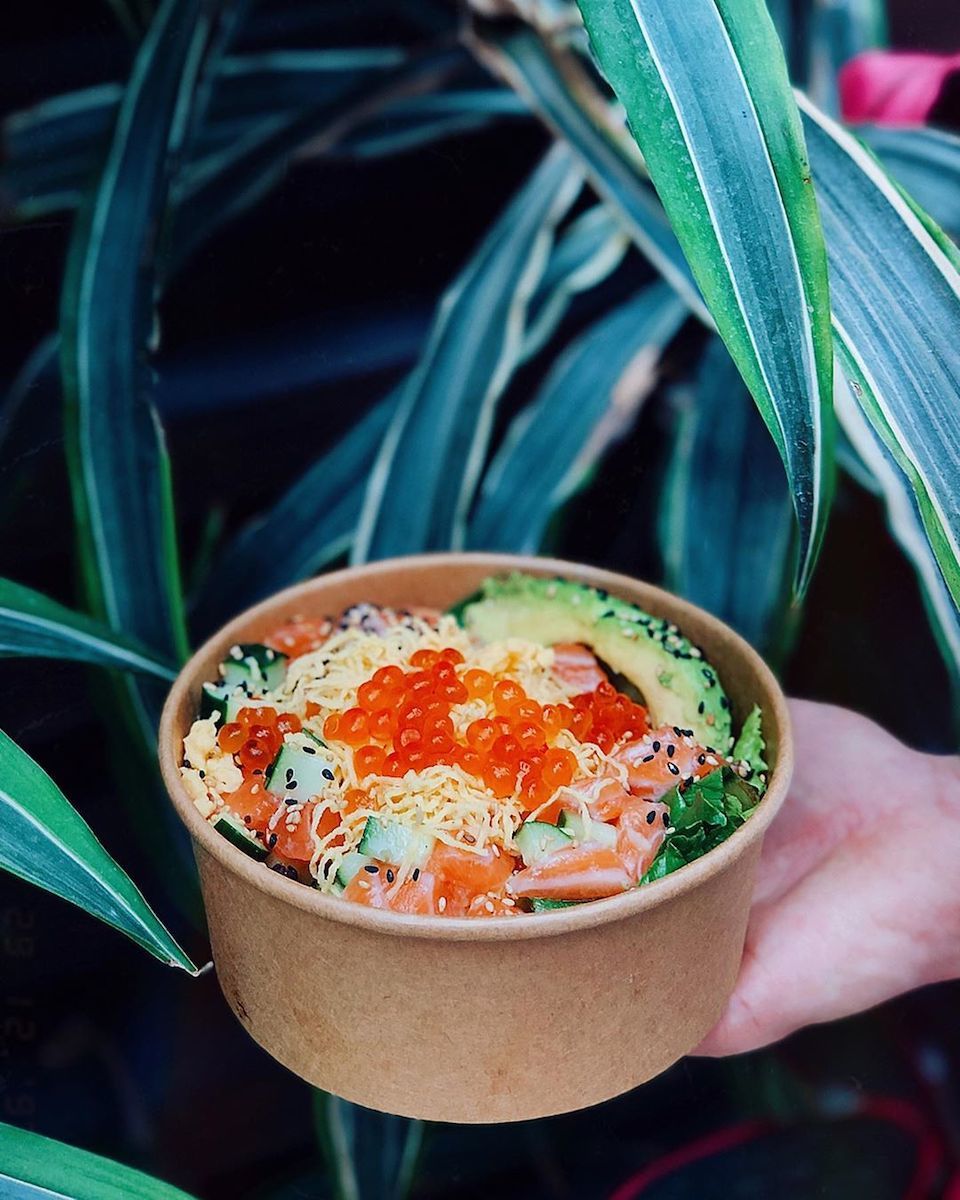 For those who don’t frequent the China Resources Building: Harbour Road Garden is home to its very own poké shack! Thanks to Poke’n Roll, you get to enjoy your personalised bowl in a tranquil oasis away from the hubbub of Wan Chai. Liberally reinterpreting Hawaiian poké, the little kiosk features bowls with familiar fusions of grains, seafood, and toppings ranging from tobiko to tomato (starting from $68). Hong Kong may not be the most keto-friendly city in the world, but with cauliflower rice on offer as a base, the folks behind Poke’n Roll do their bit to turn the tide. Head there in person for hand-labelled, home-brewed beverage options like osmanthus oolong tea. But in case you’re not willing to make the trip: You can order Poke’n Roll through Foodpanda and UberEats.

Selfish Bowl presents build-it-yourself poké (starting from $90) with a twist: Your bowl will come from Hong Kong’s first-ever cloud kitchen. Founded by Larry Tang, the force behind Locofama and Sohofama, this Foodpanda exclusive aims to overhaul Hong Kong’s food and beverage industry one dark kitchen at a time. In a portfolio spanning pun-riddled fast-casual concepts, Selfish Bowl offers serviceable poké with sides of snappy marketing and the questionable ethics of virtual restaurants. 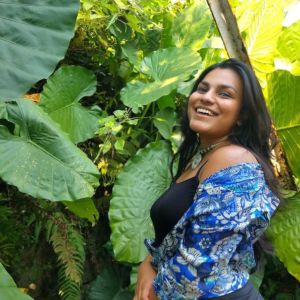 Born and raised in New Delhi, India, Aarohi moved to Hong Kong after spending time in the United States and Japan. When she’s not sipping on sake or fervently searching for the smoothest cheung fun the city has to offer, you can find her reading and writing about the politics of food and getting involved with local organisations focused on empowering immigrant and refugee women. Read more of her writing here and follow her on Instagram.