A solid loaf of bread can be hard to find in Hong Kong, but there’s no need to c-rye. We all deserve a crusty yet fluffy sourdough, a flakey croissant, and mouth-watering patisserie treats in our lives, and the Localiiz team has gone out to round up our most loafed, tried-and-crusted artisanal bakeries and boulangeries in town that can rise to the occasion. It’s the yeast we can do. 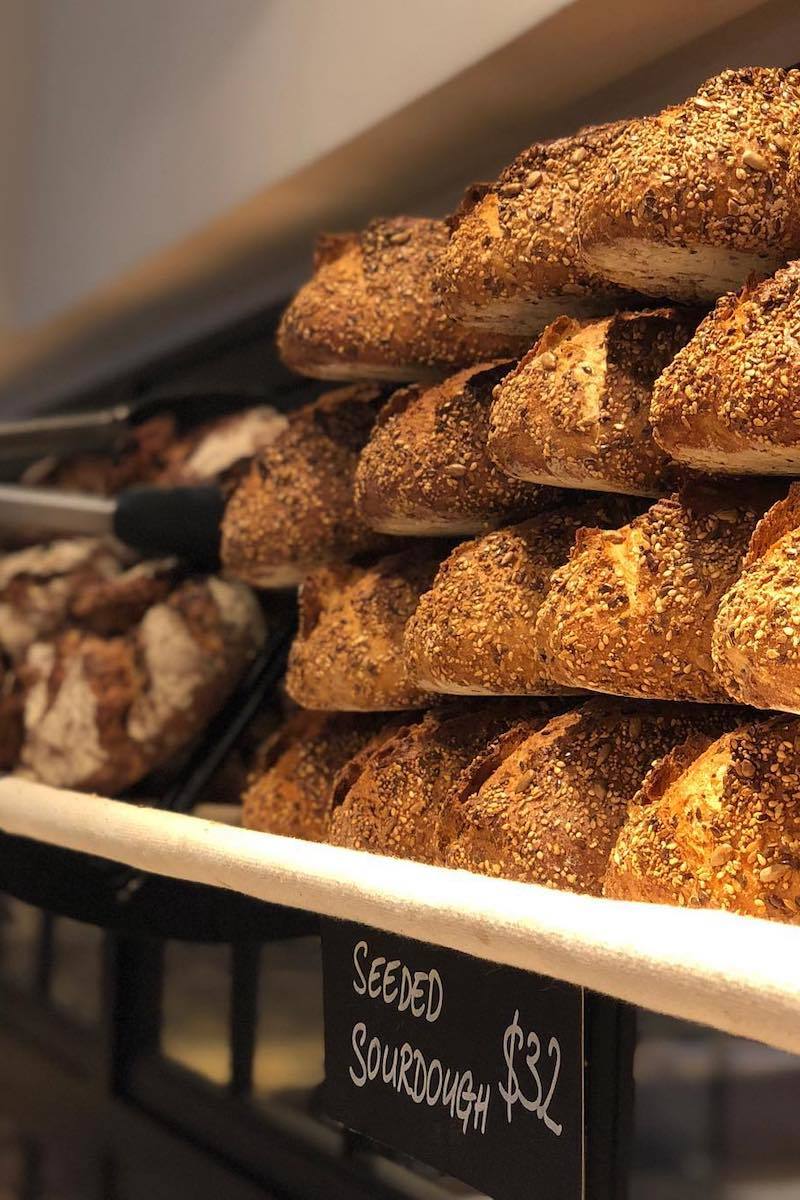 Run by Grégoire Michaud of Four Seasons fame—whose production kitchen-cum-bakery Bread Elements supplies many, many restaurants across Hong Kong—you know that you can’t go wrong ordering literally anything behind the uber-clean displays inside the modern boulangerie.

The selection at Bakehouse is seasonal, handmade daily with timely produce and time-honoured baking methods, making it one of the city’s best artisanal bakeries. Every loaf of sourdough bread is a labour of love, created with a starter that’s over a decade old and fermenting for over 48 hours before baking in a stone oven.

The same sourdough starter (or sourdough ‘mother,’ as it’s affectionately referred to) is also used in their croissant ($20), pain au chocolat ($26), and famous sourdough egg tart ($12), a delicious, elevated version of the much-loved local treat that is available from 8 am onwards.

We can also vouch for the vanilla custard doughnuts ($38) and double chocolate chip cookies ($20), as well as their à la carte menu that’s a perfect pick-me-up on a lazy weekend morning. We promise the long queues at Bakehouse are worth braving! 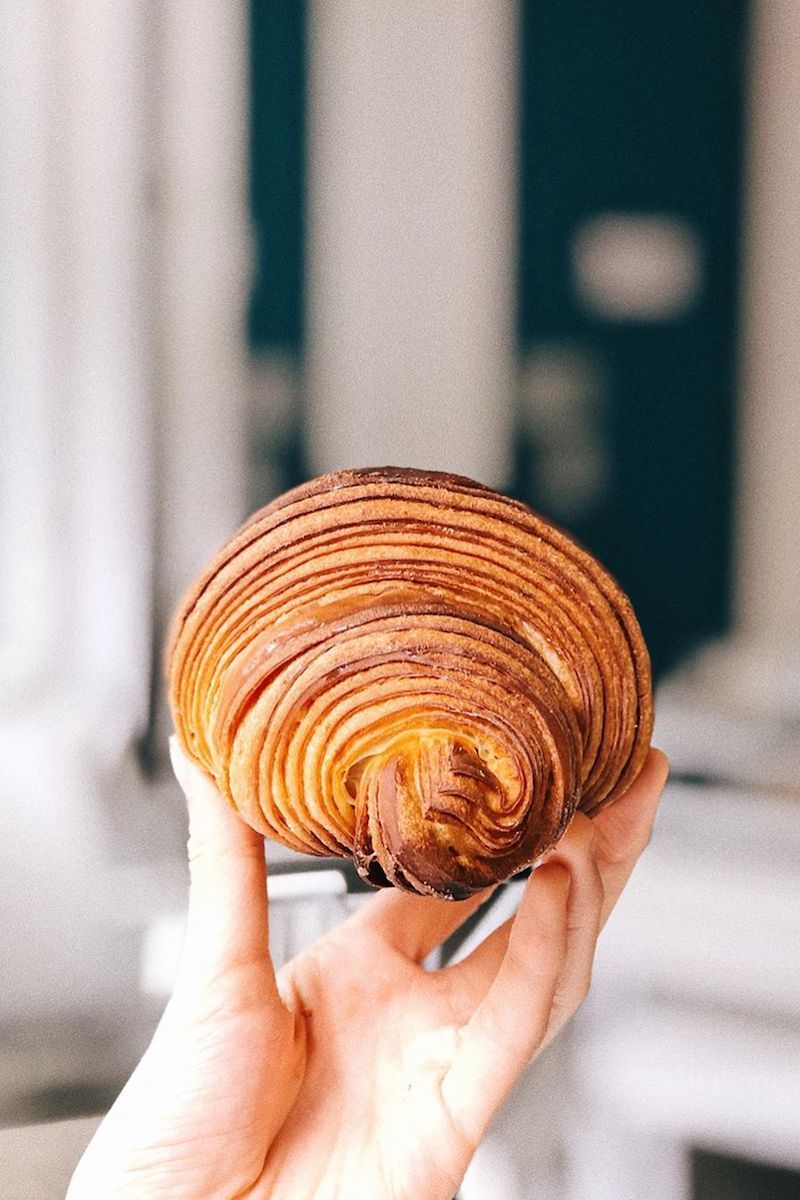 Named after the leavening agent used to ferment a gorgeous sourdough, Levain Bakery has been serving up premium European artisanal bread to the hungry masses for over 10 years now. Owner and master baker KC Li applied his Masters in Physics into the art of breadmaking, starting out with Hong Kong-style bread, then moving on to the pursuit of traditional European artisanal bread. They’re the first and one of the only bakeries in Hong Kong that use 100 percent levain in their sourdough, which produces a tangy, chewy, airy sourdough with a thick russet crust.

All of the baked goods at Levain are made without any bread improvers, additives, synthetic flavourings, or preservatives, and you’ll be pleasantly surprised to find a range of vegan and low gluten options too! Rest assured that everything you devour from Levain is handmade daily using only ingredients of the highest quality, and refined techniques from a passionate team.

We love to pop by their PMQ and Wan Chai café locations, where we can feast on scrumptious sandwiches, traditional French desserts and pastries, and cakes. If you want to really sink your teeth in, Levain also offers breadmaking classes at their PMQ location conducted in Cantonese by KC himself (English classes are available on request). Whether you choose to take a beautiful sourdough home or just kick back with a coffee and a scrambled egg and smoked salmon croissant, you’re sure to be satisfied at Levain. 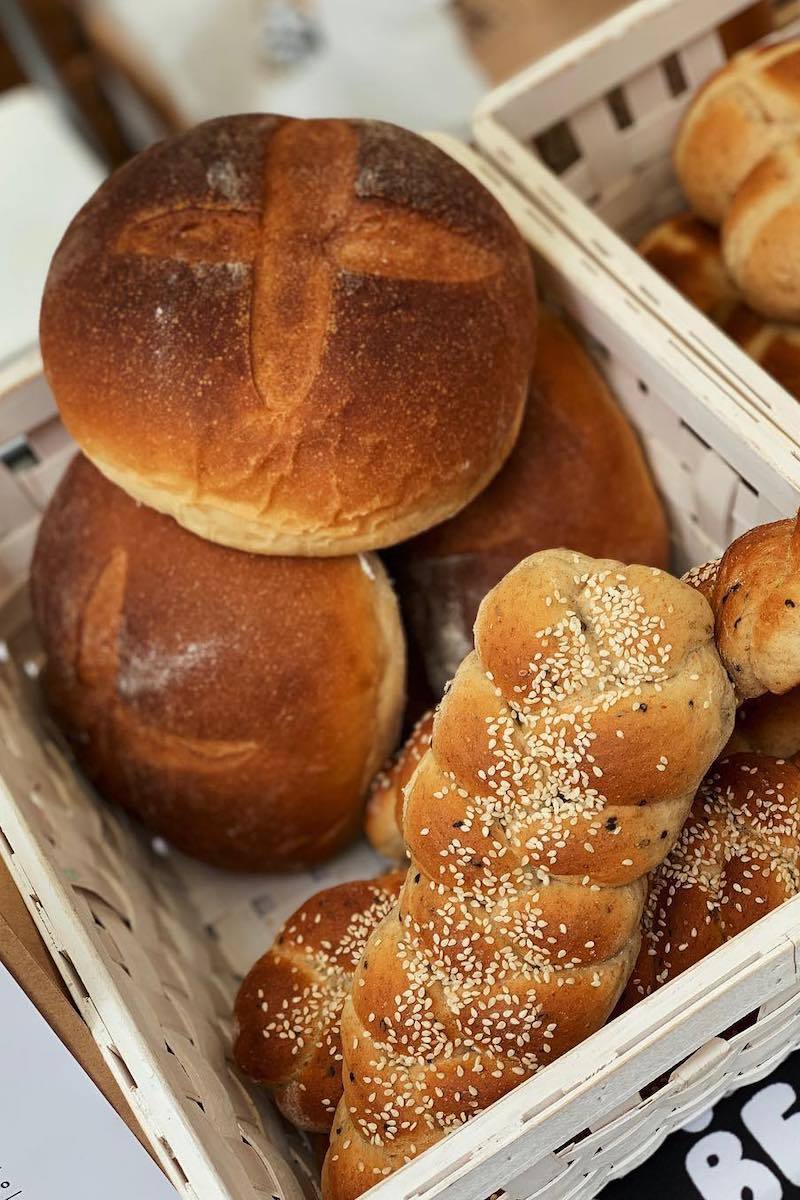 If you’ve ever gone hiking or biking through Tai Po’s picturesque Tai Mei Tuk Village, chances are you’ve happened across Mayse Artisan Bakery. This 100 percent plant-based bakery may be off the beaten path for most, but the tasty and filling bread and pizzas they make are 100 percent worth the trek.

Run by a native Latvian father-daughter duo, the bread you’ll find at Mayse are a welcome departure from French and Italian bread that we’re used to, as they’re made with love following traditional Latvian recipes and slow-fermented for upwards to 40 hours to ensure that the resulting loaves are exactly like how they’re baked and eaten back home in Latvia.

The true standouts at Mayse, however, are the vegan sourdough pizzas. Daughter Elina, dedicated to her craft, makes fantastic vegan pizzas with wild yeast and a vegan cheese substitute that nearly comes close to the real thing, along with all the veggie toppings you could ask for.

No worries if you can’t make it out to Tai Mei Tuk—you can also find Mayse’s baked goods at pop-ups around the city (Elina started the Vegan Block Party last year), used in sandwiches at Confusion Plant Based Kitchen, and at eco stores like LiveZero.

8 urban cafés in Hong Kong to escape the crow...

10 best croissants you have to try in Hong Ko... 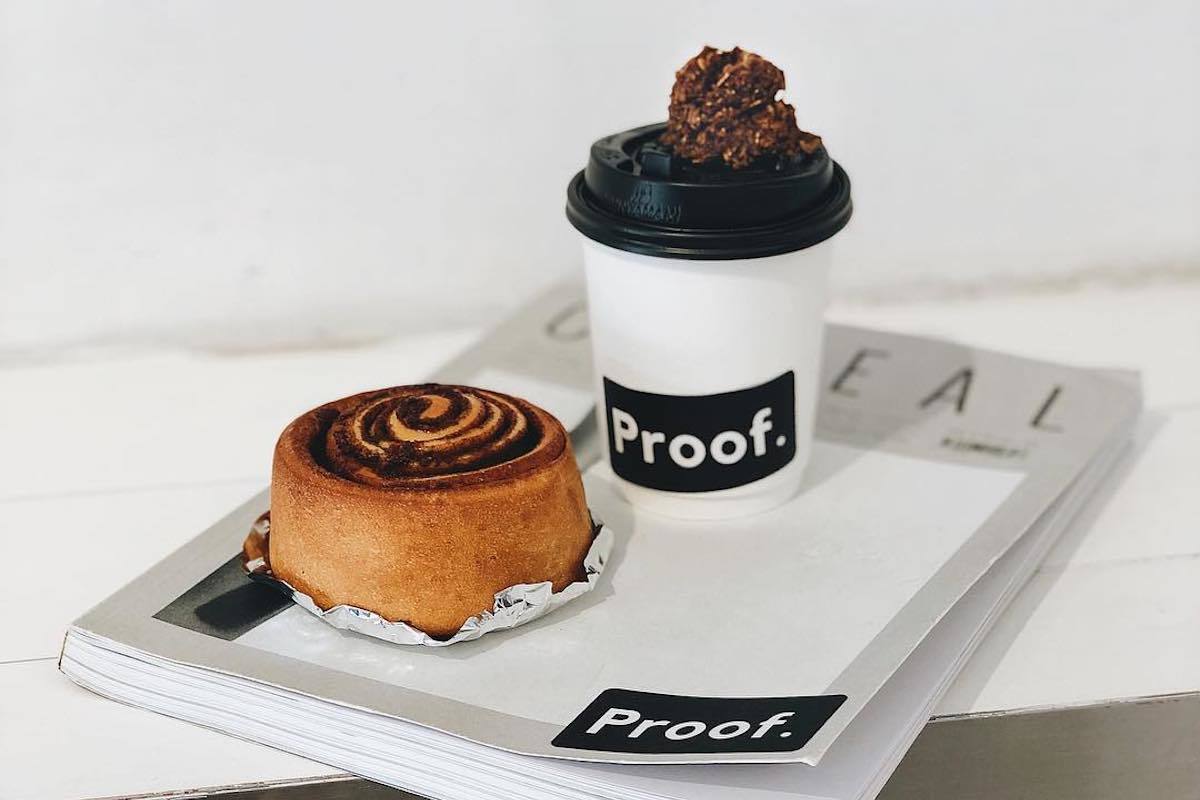 Australian artisanal bakery Proof is a must-visit for the conscious bread lover. The artisans here use unbleached flour without preservatives, additives, improvers, and stabilisers to create a rotating menu of delicious baked goods that are made fresh on-site at their bakery in Happy Valley.

Proof releases their daily offerings on their Facebook page daily, but you’ll most commonly find favourites like their natural sourdough, bagels, and pain au levain. You can also satisfy your sweet tooth with their fabulous range of pastries and desserts.

We highly recommend their signature cinnamon buns: a sticky, buttery mess of a treat so good you’ll probably order another one. The bostocks are also an uncommon find that we love, a cross between french toast and an almond croissant. Since they’re Aussie, sometimes you might find a good old-fashioned Berliner on the menu, a staple of Aussie bakeries that’s sort of like a sugar-dusted doughnut filled with raspberry jam. For our readers who’ve spent time in North America, getting pretzels at the mall might be something you miss. Proof does fantastic brezels (doughy German pretzels) that are sure to fill that nostalgia, as well as your stomach.

A few things to note before you set out for a visit immediately after reading this: Proof is a takeaway bakery so you’ll have to find a spot in a quiet park to wolf down your goodies, and they close comparatively early at 4 pm. At the end of the day, all of their leftover bread is donated to charity, so you can dig into some amazing baked goods knowing that those in need will also get a taste. 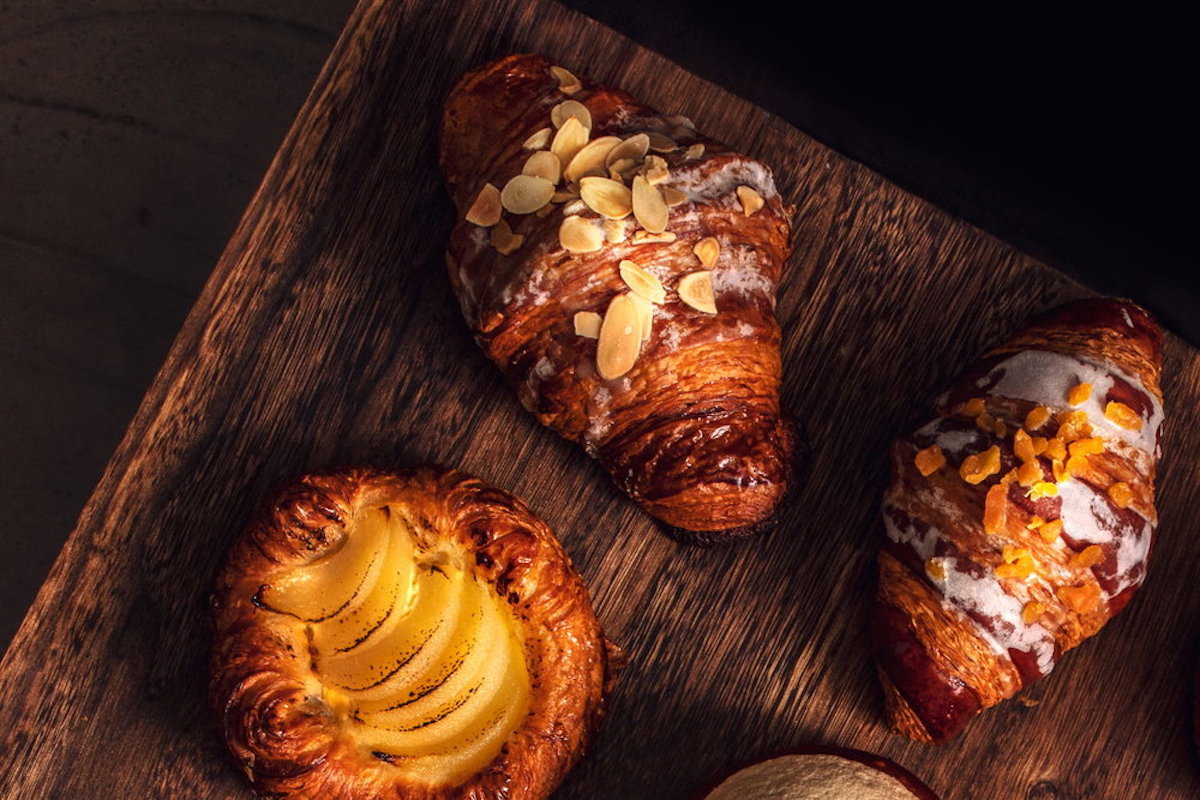 Plumcot is a family-run French bakery bringing a taste of Paris to Hong Kong. The owners, professional pastry chefs Camille and Dominique, have a combined 30 years of experience at restaurants like Hélène Darroze, Senderens, and Pierre Hermé Paris, and set up the cosy Plumcot in Tai Hang in 2017.

You’ll find all your favourite patisserie and viennoiserie delights here, from staples like croissants, pain au chocolat (the chocolatine and pain au chocolat debate continues) and brioche, to danishes, chausson aux pommes, madeleines, and gateaux au voyage. If you’re looking for a stunning cake for a special occasion (or just because), Plumcot offers seasonal varieties in generous sizes that are sure to make anyone feel special. 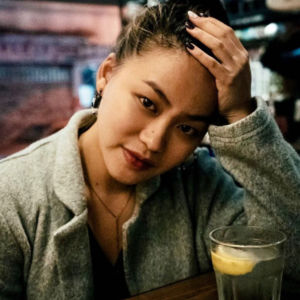