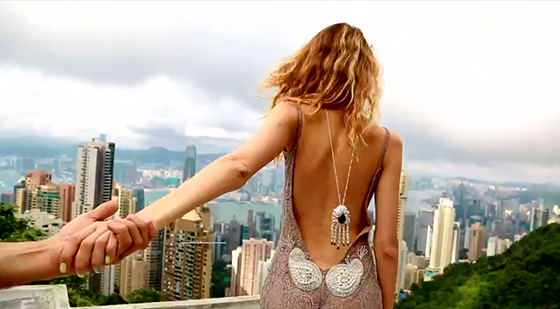 Celebrity endorsements are worth their weight in gold when it comes to raising awareness of an issue or product. Think Yao Ming and elephant ivory. David Beckham and Adidas. But how about Murad Osmann and the Hong Kong Tourism Board (HKTB)? In the latest instalment of its 'Celebrities' Hong Kong Experience', the HKTB is showcasing Osmann and his fellow Instagrammer, Natalia Zakharova, better known on social media by their hashtag #followmeto. The Russian pair spends a little over a minute strolling through Hong Kong, discussing romance, and generally gushing about our wonderful city. On the surface, a very nice video, but it piqued our curiosity. Why is the HKTB partnering with foreign celebrities? Localiiz spoke with the HKTB to find out the story behind this latest video. Earlier this year the HKTB rolled out a public relations campaign it refers to as personality endorsements, to make the city more appealing to travellers. By enlisting influencers from both around the globe and across several industries, they aligned foreign personalities with ringing endorsements of the city. Unlike the tried and true method of scripted celebrity endorsement, the HKTB decided to take a more genuine approach, following these outspoken champions of the city with a film crew to capture honest experiences. It’s true that some videos may have an outline, such as 'How to Eat a Cow in Hong Kong' with Canada’s Michelin star chef Alvin Leung of Bo Innovation, but the core content are real reactions and true enjoyment of our city. The content is then spun off to overseas audiences and potential travelers, where the featured celebrities are a household name. One video featuring featuring four Korean was showcased at a Korean contemporary art fair featuring the group’s Hong Kong inspired art pieces. Other videos have been played at HKTB’s promotional events in overseas markets and shared through our social media platform. The HKTB’s been at this since May 2014 when they invited Osmann and Zakharova to Hong Kong for the filming. Since that partnership, the HKTB released a batch of videos in addition to the Korean artists piece including EXILE, a popular Japanese group and Indian designer named Rocky S. The #followmeto video marks the start to the second wave of endorsements by showcasing Hong Kong as a romantic destination. This will be followed by Subhash Ghai and Nagesh Sri Kukunoor, two Bollywood directors showing the audience the rich culture of the city, and Kostya Tszyu, a 4-time world Light Welterweight boxing champion paying tribute to Bruce Lee. So how does HKTB find such a diverse group of celebrities? The old-fashioned way, they ask. If there is someone they want to appear in a video, they reach out. If the HKTB team learns of a celebrity coming to Hong Kong they will contact their agent. It also can’t be discounted that the HKTB will push each celebrity out as part of a global public relations campaign, keeping these famous names in the limelight while introducing them to a new audience in Hong Kong. Using local film crews, such as Videone Production Ltd., the footage is usually shot in one day or less, depending on the celebrity’s schedule. For the video featuring Osmann and Zakharova, the team only had a few hours but managed to gather the needed footage in that small window. The next celebrity endorsement is expected sometime before Christmas according to our HKTB insider. But who will it feature? We’ve been sworn to secrecy, so no spilling the beans here, however he may give the censors a workout. Check out the HKTB’s videos and let us know which one you like best.
[button color="blue" size="medium" link="https://localiiz.us4.list-manage.com/subscribe/post?u=c2964a434922598f5d8ee53ff&id=07d327a2e8" icon="" target="true"]Subscribe to receive our weekly newsletter[/button]