How long has it been since you last sat down in the audience, heart beating in anticipation for the lights to go on? Over the past year and a half, performers have sought out creative ways to bring to Hong Kong art experiences behind closed doors and streaming cameras, but being there in person comes with an entirely different sort of magic.

As curtains are raised and sorely missed sounds fill the concert halls again, make sure not to miss out on what the best performing arts venues in Hong Kong have to offer. 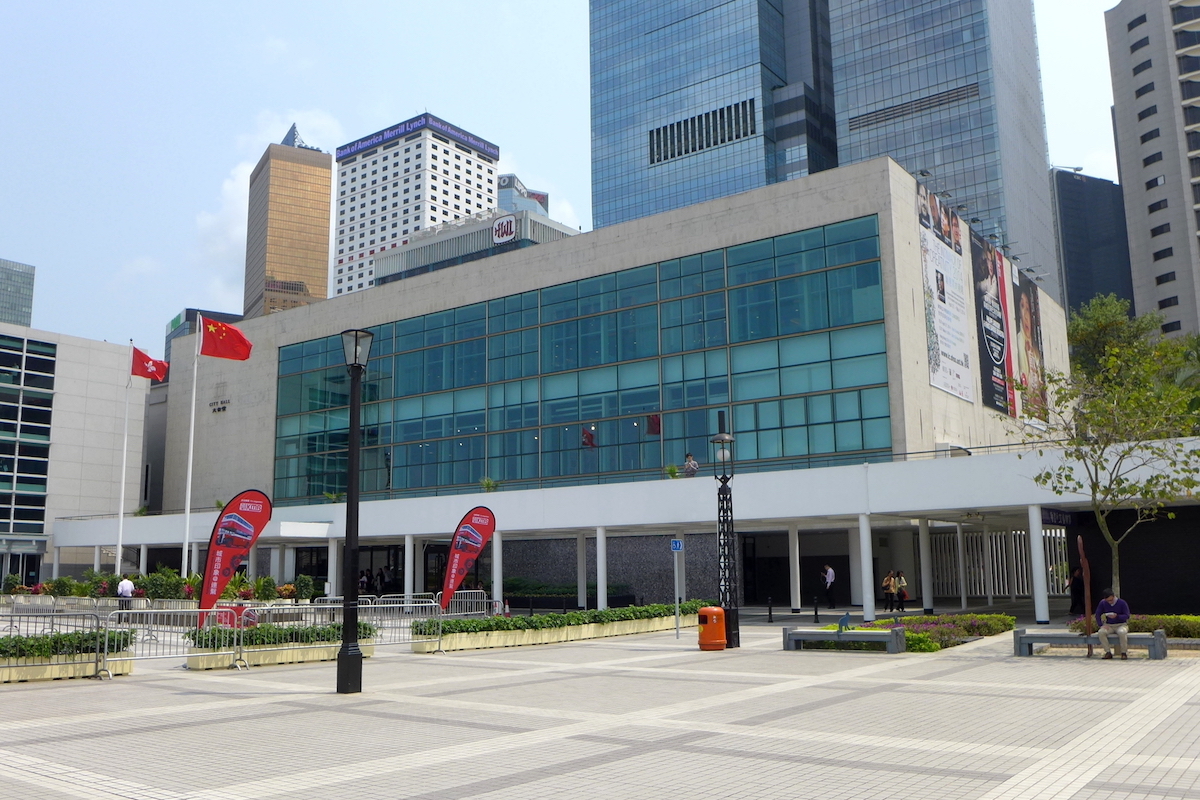 The foundation stone for the Hong Kong City Hall was laid to the vision that it would be “the hope and value of the life of Hong Kong people,” and indeed, it has been that since its opening as the city’s first multi-purpose cultural complex in 1962.

For over a decade now, the Bauhaus-style destination near the waterfront has been high on the government’s list of important historic buildings—to the credit of its distinctive architectural design and the possibilities it has created for local cultural activities.

Having welcomed generations of artists, the City Hall remains amongst Hong Kong’s foremost performing arts venues and accommodates far more than just classical music, despite the general impression. In particular, its concert hall has seen innumerable orchestras, troupes, and maestros of world renown on its stage, including, but certainly not limited to, cellist Yo-Yo Ma and the Royal Danish Ballet. 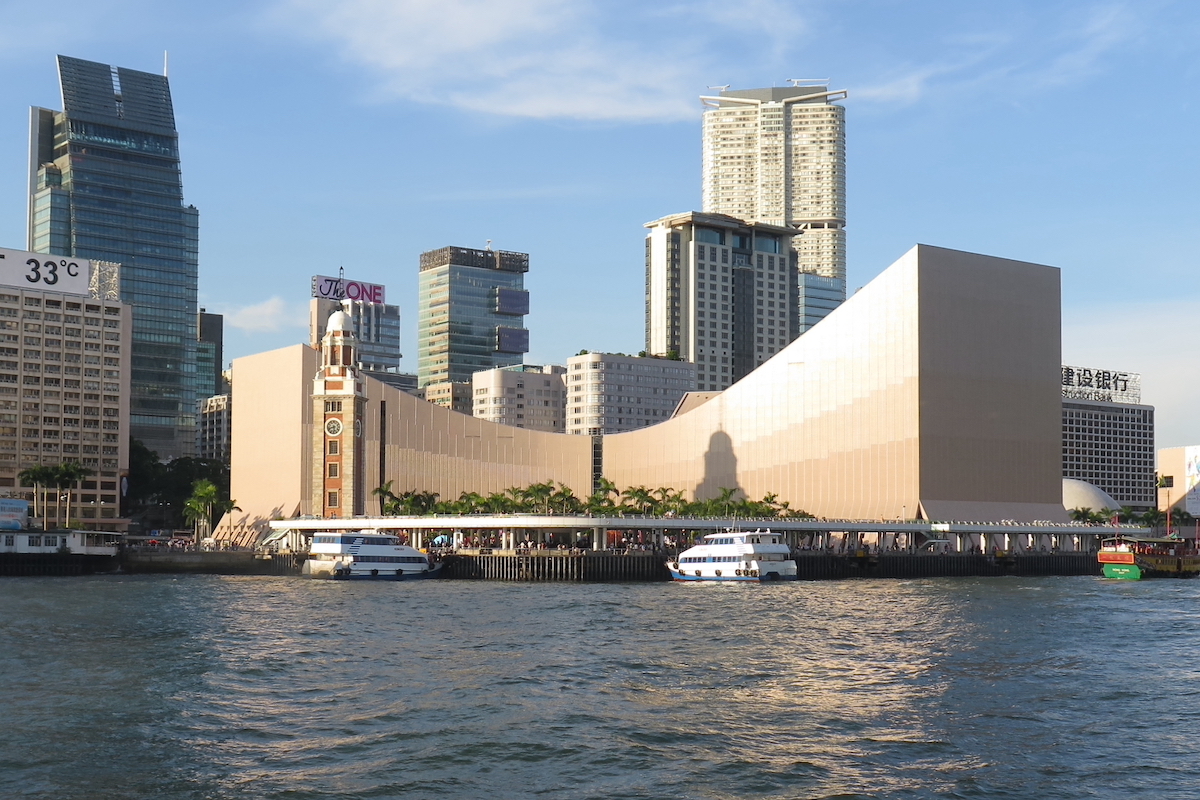 Erected on the site of the old Kowloon station of the Kowloon–Canton Railway (KCR) and next to its still-standing historic clock tower, the Hong Kong Cultural Centre is as much a landmark as its predecessor and holds its own social importance, though in a completely different sense. With multiple stages and corresponding facilities within the structure, this is a cultural hotspot to rival the Hong Kong City Hall across the harbour.

As the Hong Kong Cultural Centre is home to Asia’s largest and one of Hong Kong’s only few pipe organs, it is the go-to place for sacred music enthusiasts and increasingly often those who seek the film score experience. That said, its impressive capacity finds favour with a range of performers from around the world, most recently and famously Joe Hisaishi, composer of beloved Ghibli Studio suites. It is also, of course, partners with our very own Hong Kong Ballet, the Hong Kong Chinese Orchestra, and the Hong Kong Philharmonic. 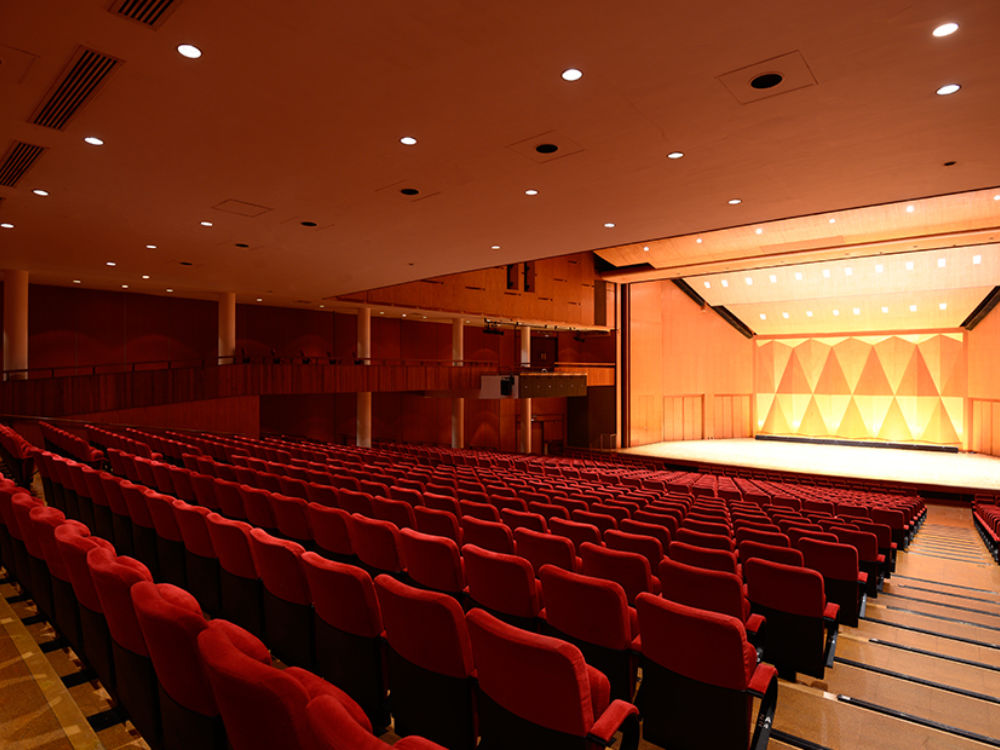 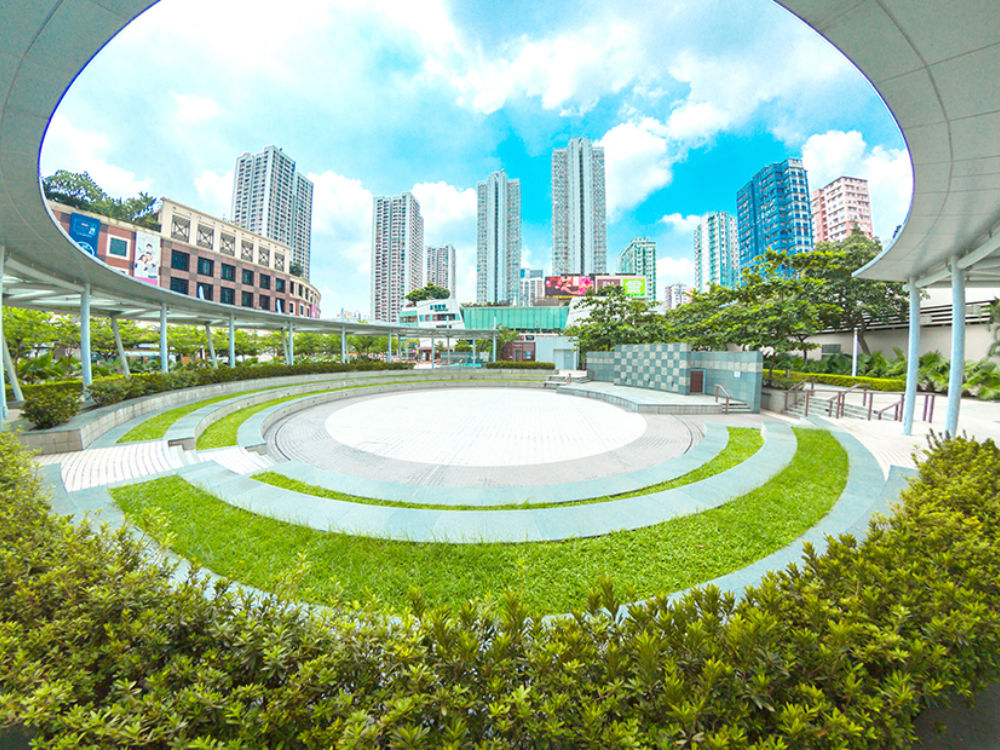 If you long for a taste of the arts in the New Territories, look no further. Alongside its siblings in Tuen Mun and Sha Tin, the Tsuen Wan Town Hall was modelled after the City Hall to serve as a prime performing arts venue in the area. It is widely acknowledged that although the Town Hall is not fastidious about its performers, it flatters classical musicians most of all with Hong Kong’s best acoustics in a “shoebox-style” auditorium.

Once, the auditorium stage knew international acclaim in the music scene, but these days, it deals more with local-oriented events. The annual Hong Kong Schools’ Music Festival, for example, where budding local choral, orchestral, and other musical talents put their prowess to the test, often holds its finals here. 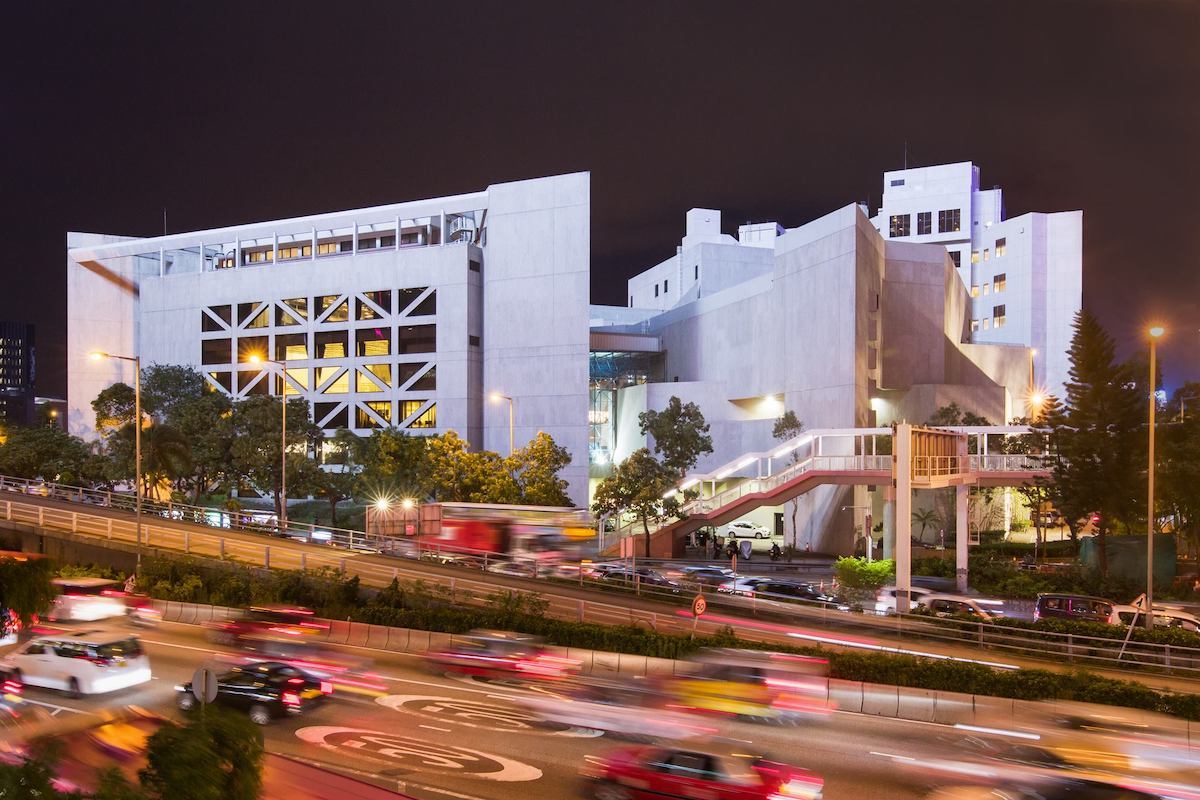 Photo: The Hong Kong Academy for Performing Arts (via Facebook)
4

For the Hong Kong Academy for Performing Arts, education is merely the launching board to realising the art of the performance, which continues on stage in its 1181-seat Lyric Theatre and smaller theatres. While these are platforms for academy students and their in-school recitals and productions, they are also loaned to all.

Unlike the aforementioned concert halls, which may lean more towards the classical, the Hong Kong Academy for Performing Arts wears Rachmaninoff as well as it does Schwartz and Sondheim’s wildly popular Broadway musicals and modern performances. Drama companies are regulars, and you can always count on the APA to give you a glimpse into the world of aspiring Hong Kong performers. 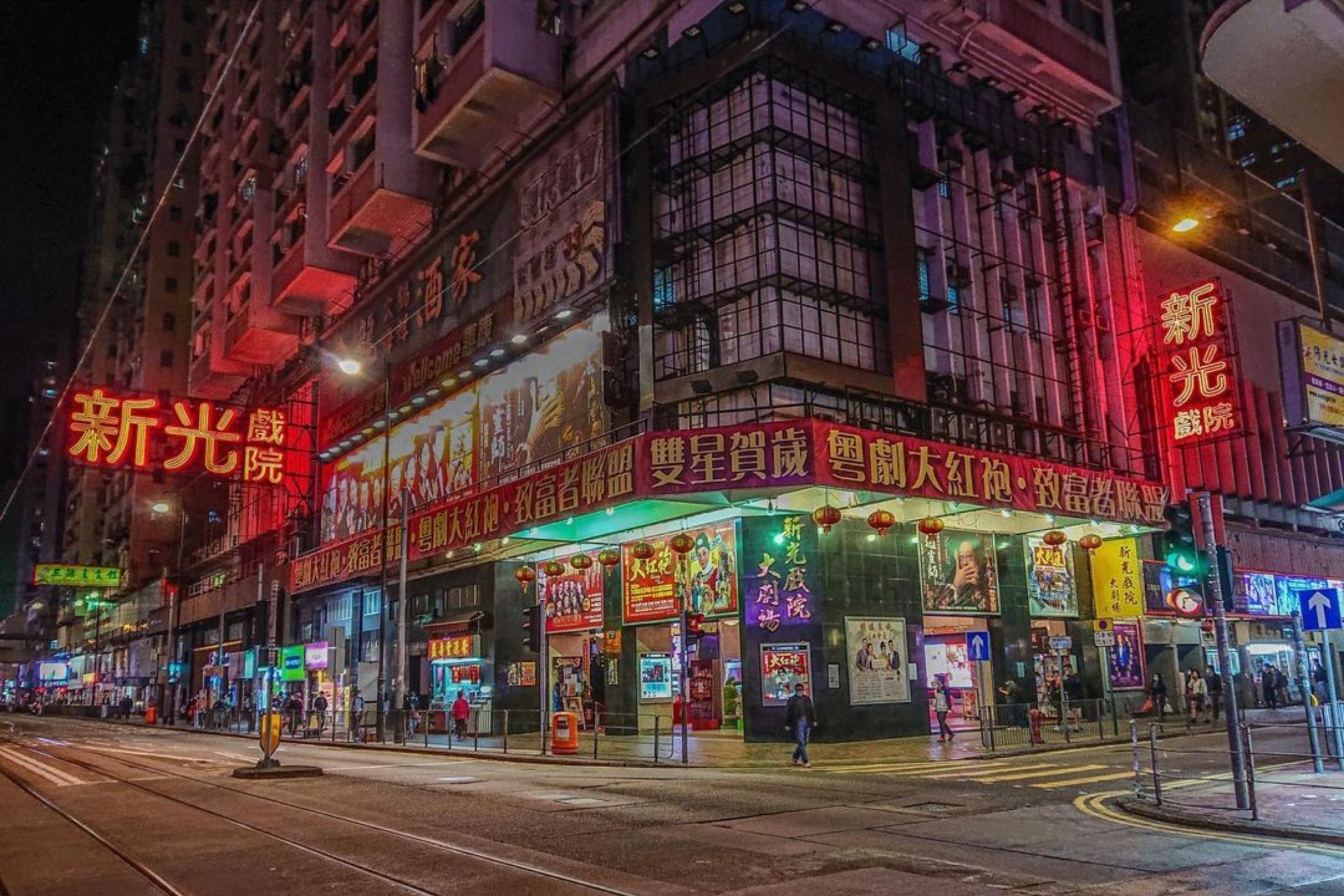 Strictly speaking, the Sunbeam Theatre’s origins lie with Shanghainese immigrants in the mid-1950s, but it has come to be near synonymous with Cantonese opera. Hong Kong’s oldest venue for the arts is famously dubbed “Hong Kong’s temple of Cantonese opera”—and deservedly so.

Through the years, the Sunbeam Theatre has been graced by the presence of opera giants from Hong Kong and mainland China both. In the history of the much-celebrated Sun Ma Sze Tsang and Hong Sin Nui, Sunbeam proudly takes its place, and it went on to facilitate performing arts exchanges and collaborations.

Its importance is partly why it has hung on amidst the decline of Cantonese opera despite being several times at the brink of closure, and has opened a new path as a centre of traditional Chinese art that offers also cinematic experiences. 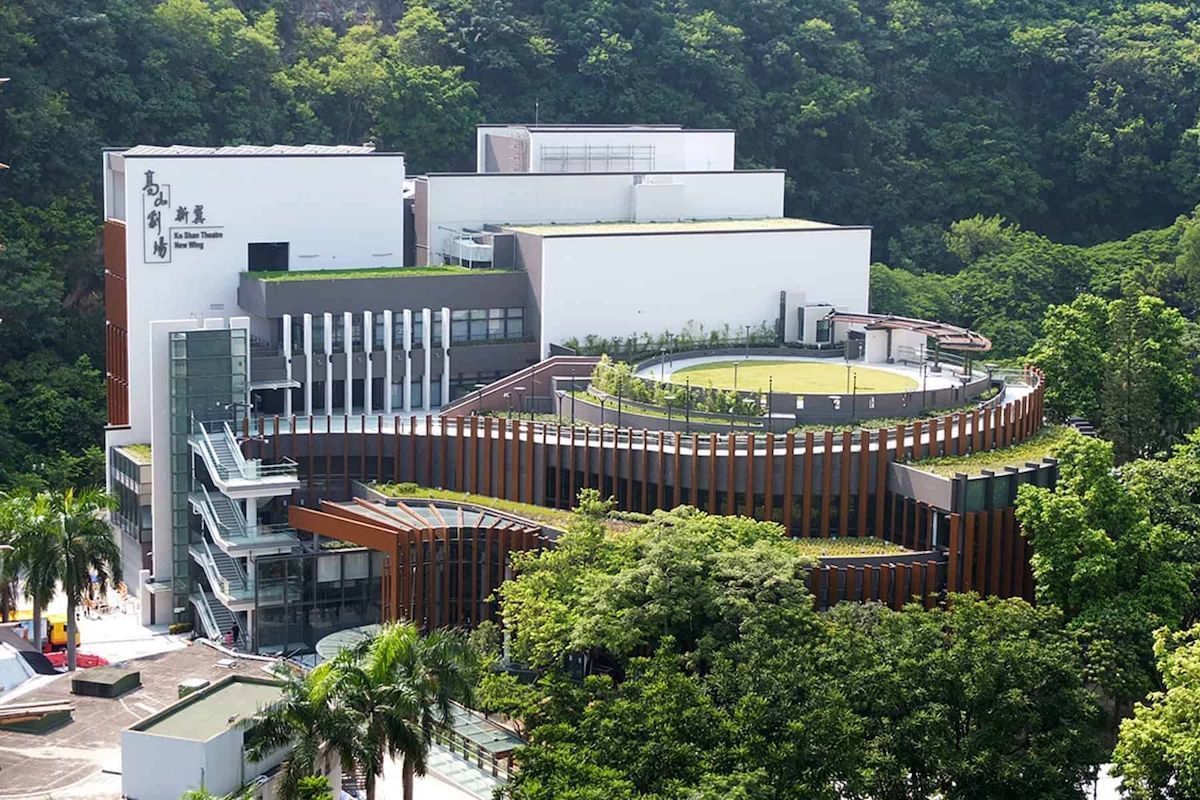 In bygone days, Ko Shan Theatre drew rockers as nectar drew bees, and if there was heat and sweat, it was more for excitement than its then-semi-open environment. Ko Shan Theatre bore the footprints of not only legendary Hong Kong band Beyond, but also British greats Radiohead and other underground music groups.

A renovation in the late 1990s put an end to those heated days and pointed the Ko Shan Theatre towards a different branch of performing arts. In the air-conditioned and well-equipped performing arts venue of today, most shows are either Cantonese opera or dedicated to its development. As a newer Chinese arts hub to accompany the Sunbeam Theatre on Hong Kong Island, the (Cantonese opera) show goes on.

A look into the history & culture of Chinese ... 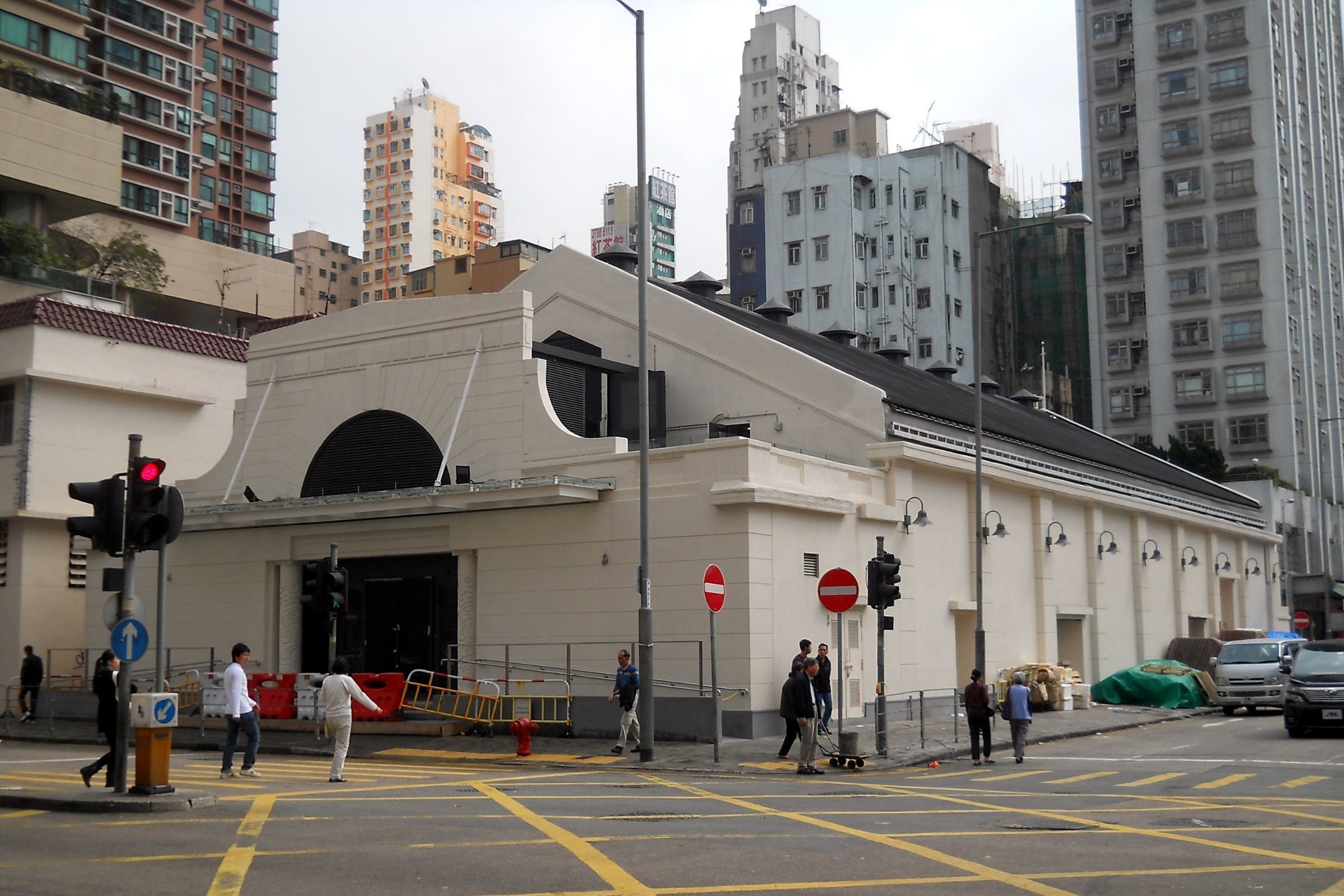 Not happy with the Ko Shan Theatre’s modern vibes? Here is a more down-to-earth and historic choice—quite literally, as Kowloon’s only surviving theatre from before the Japanese occupation used to screen films for coolies and the working class, up until it was converted to serve Cantonese opera purposes.

Once you have had your fill of arias and quartets, feel free to join a guided tour to see into the depths of the Yau Ma Tei Theatre and hear about how the historic building made its way into the traditional Chinese performing arts circle. The neighbouring Red Brick Building, a former Water Pumping Station Engineer’s Office, is also worth visiting as part of the Cantonese opera centre’s daily operations. 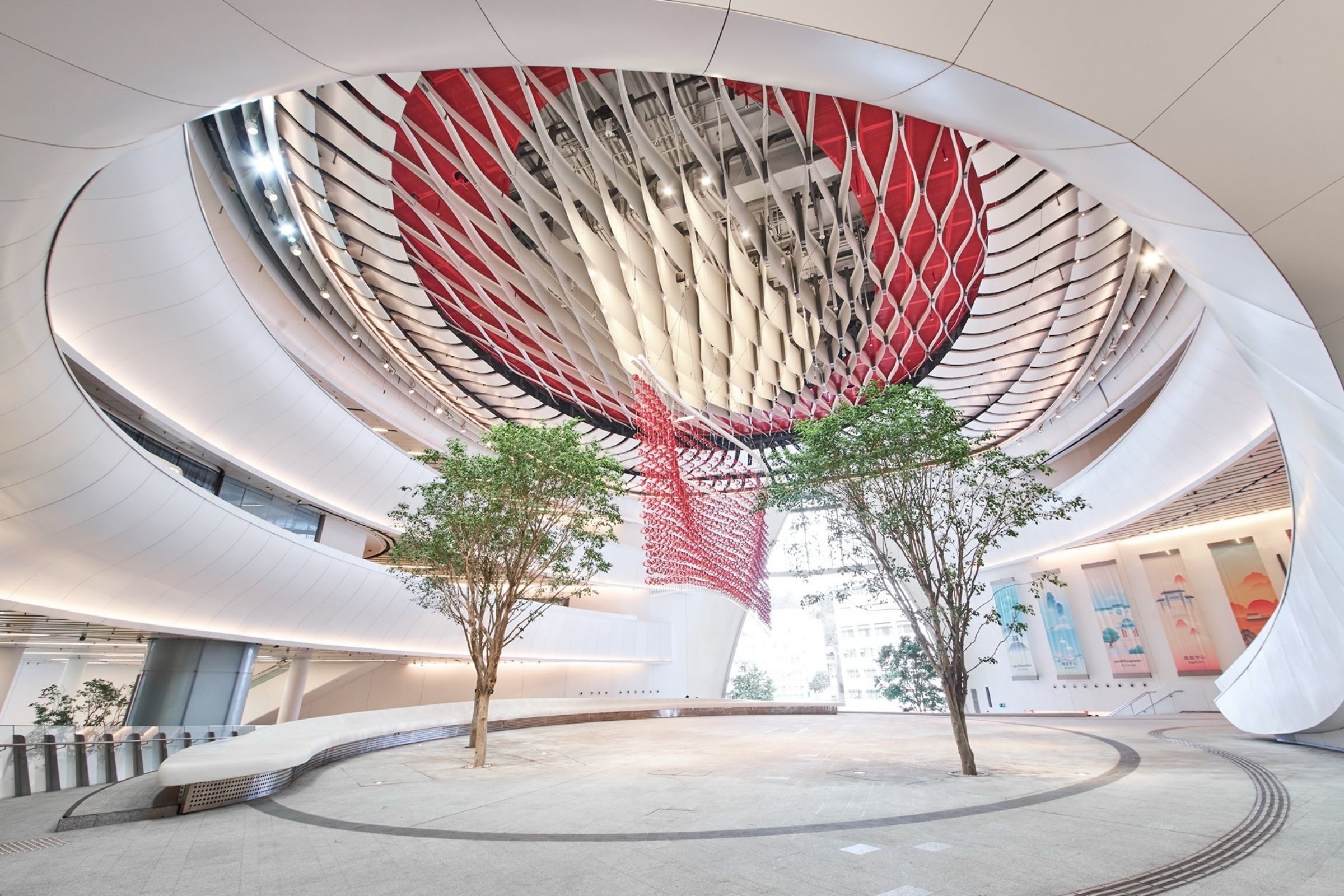 First amongst the West Kowloon Cultural District’s projects to open to the public, the Xiqu Centre is Hong Kong’s newest state-of-the-art, world-class performing arts facility. Tailored for the conservation and promotion of xiqu (戲曲)—otherwise known as Cantonese opera—as a valued intangible cultural heritage item, even the appearance of the building draws inspiration from xiqu images and concepts.

Within, the Grand Theatre is one of the largest such venues in Hong Kong. The Tea House Theatre, on the other hand, provides an atmospheric environment in which the audience is initiated into the traditional Chinese theatre experience, complete with tea served during shows. For those in the mood for something lighter, music performances of diverse genres, such as jazz, acoustic, and indie, are also regularly held in the atrium. 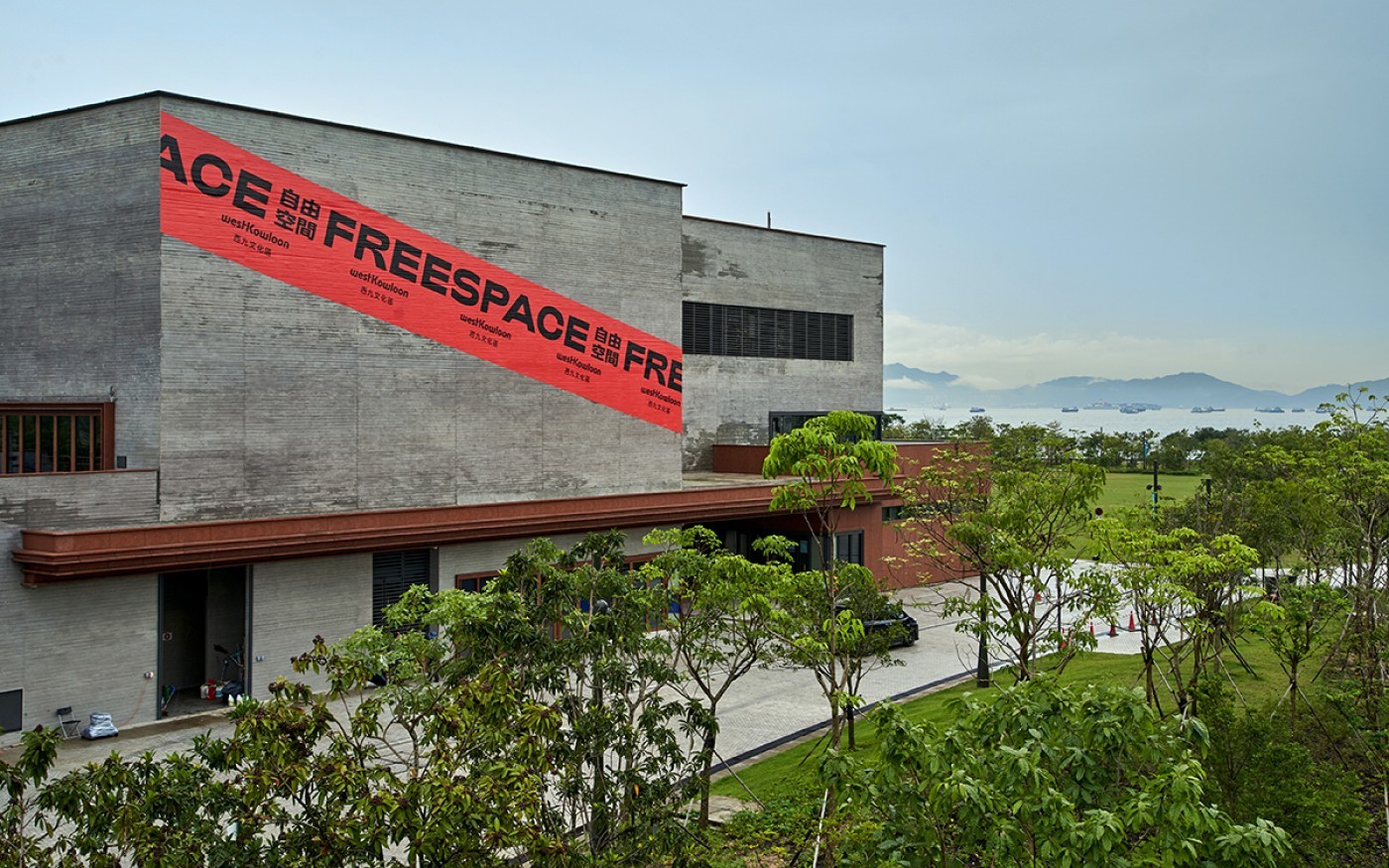 Much as its name indicates, Freespace encourages free-flowing ideas that challenge what art can be. That it has the Victoria Harbour at its back and opens into the Art Park of the West Kowloon Cultural District is simply a plus for its environment. A modest building at first glance, the brand-new performing arts centre may surprise you with Hong Kong’s largest black box theatre, fit for multimedia and genre-defying shows of all kinds. On the side, its Livehouse is an alternative relaxing space that is part bar, part music showcasing platform. 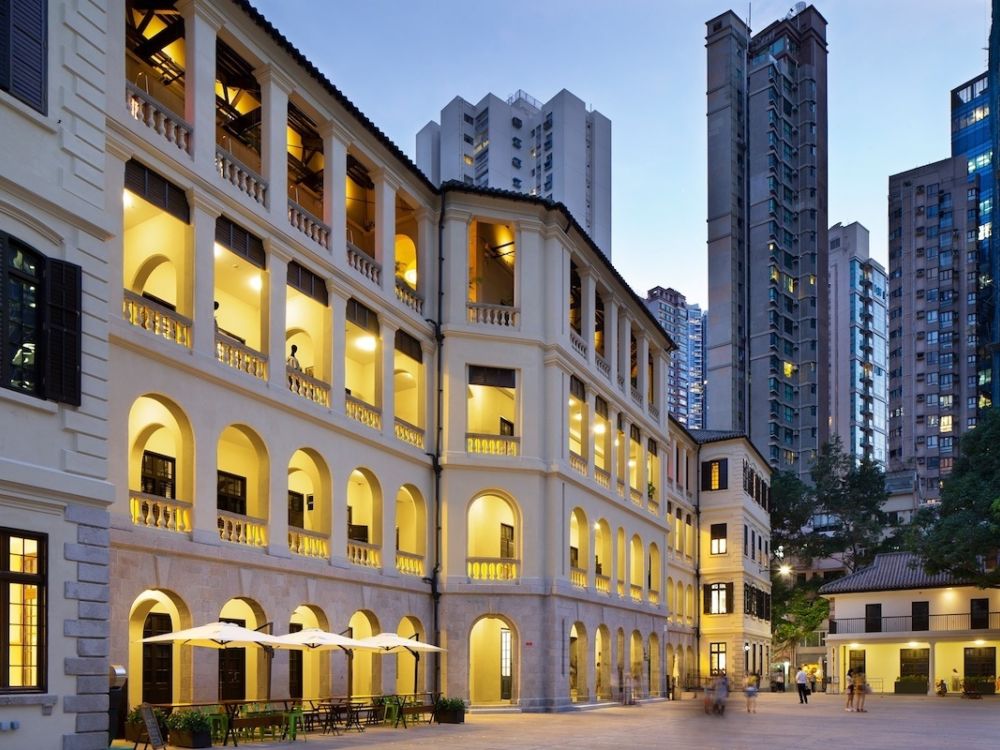 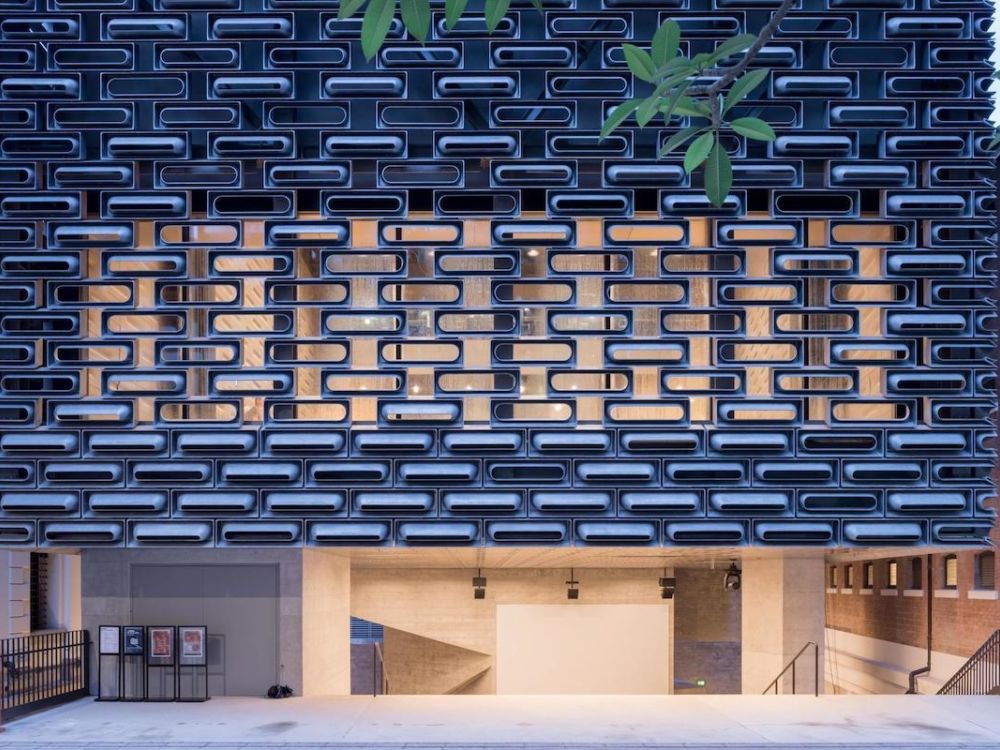 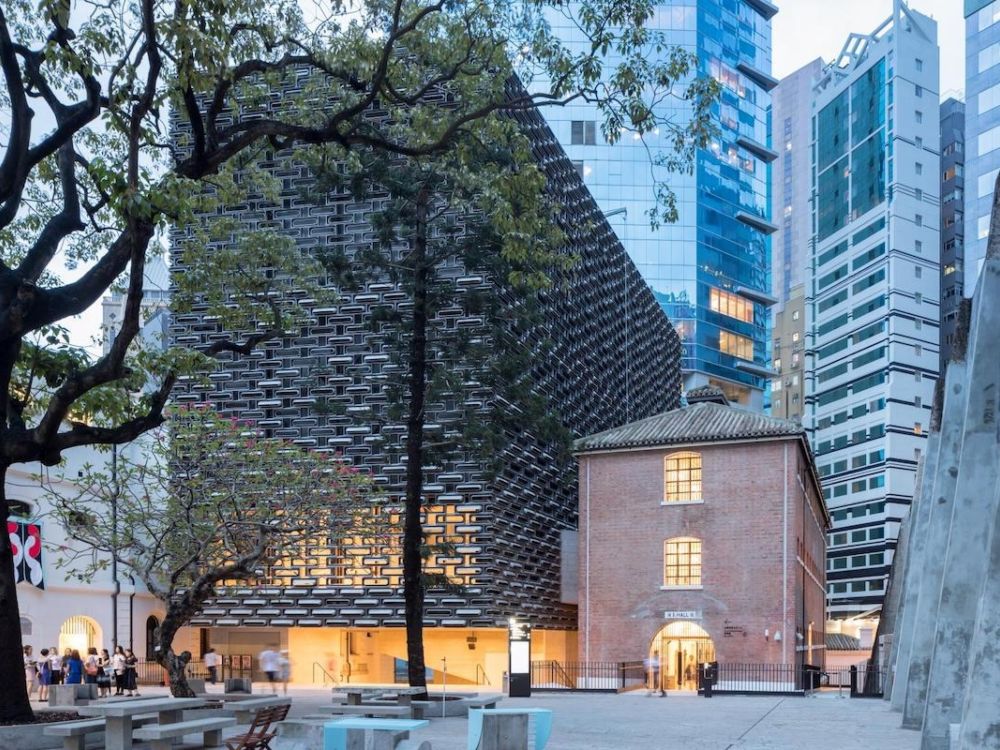 Bridging its century-old history with a modern approach to contemporary arts, the Central Police Station Compound reopened as the Tai Kwun Centre for Heritage and Arts a mere three years ago, bringing together conservation and art in an award-winning revitalisation project. Going through Instagrammers’ admirable shots of the newly furbished attraction, it is easy to forget its role as a rising events space.

Of Tai Kwun’s venues, the JC Cube, evoking images of colonial brickwork in its walls, is a standout. The multi-purpose auditorium hosts 4K projection screenings and other performances away from the hustle and bustle outside. That is not to say the outdoor venues lack their own charm—the semi-open Laundry Steps hosts chamber music concerts, while circus acts take place on the Parade Ground, much to the delight of children.

Many know it as a museum for its exhibitions, but that’s not all it is. The Hong Kong Arts Centre’s contribution to performing arts starts with the Shouson Theatre, which can entertain a sizeable audience with drama and dance. Meanwhile, the McAulay Studio caters to a condensed group with small-scale productions, whose quality is guaranteed regardless. Perhaps not as high-profile, the Arts Centre’s shows are often put on by emerging contemporary artists or local companies, but chances are that you might stumble on a future star any day. 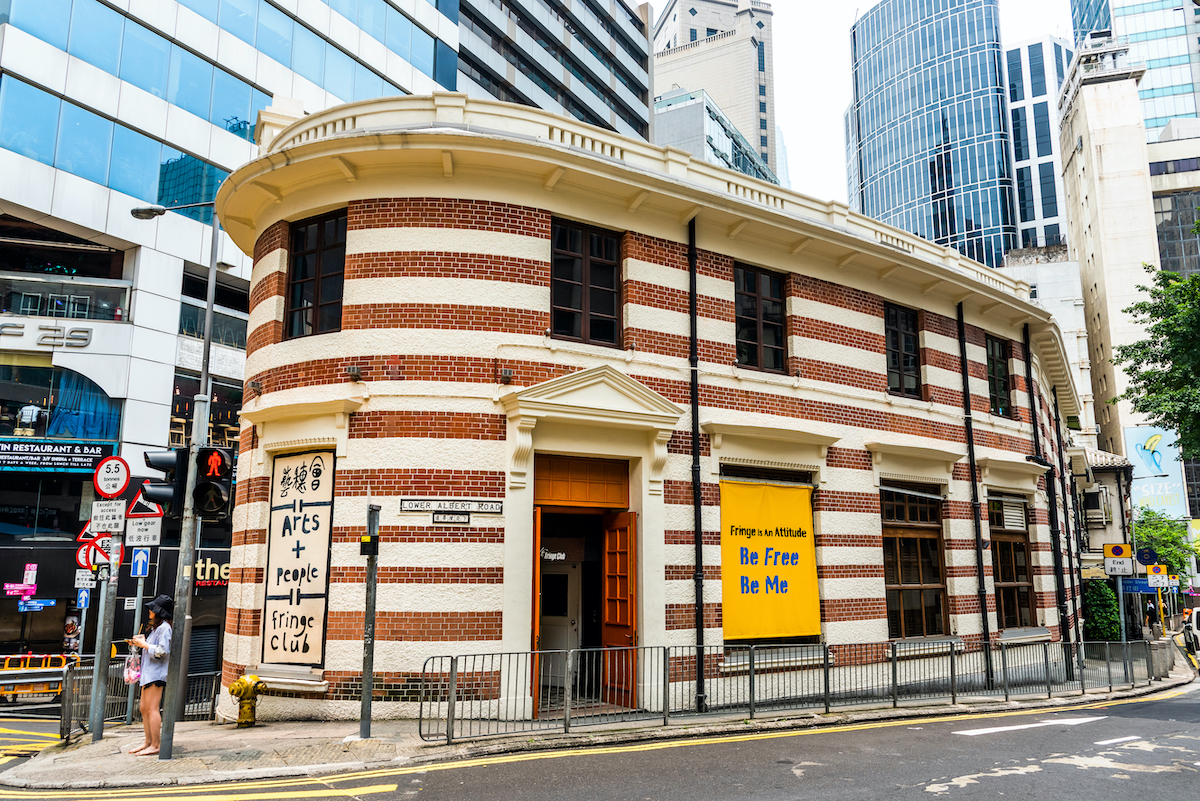 The 1892 Grade I historic building that houses the Fringe Club began as a dairy depot. Today, its distinctive red-brick façade conceals a vibrant, open-access arts venue. What the Fringe Club offers is a platform for independent artists and groups to speak freely with their performances without their works having to undergo selection. Such flexibility paves the way for immersive experiences, experimental theatre, and other refreshing performances, musical or otherwise, in a quaint building just slightly secluded from the Central cacophony. 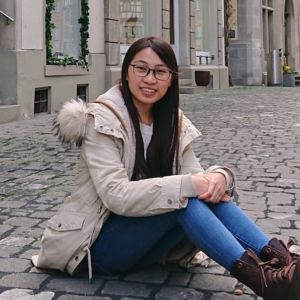