Everyone in Hong Kong knows that it’s relatively easy to find a public bathroom. Shopping centres and most MTR stations are equipped with toilets, and besides, there is always McDonald’s to count on. And when those are out of reach, like during a hike on a scenic outlying island, you can go to one of the 840 government-operated public toilets.

But these are modern times. Back in the day, it was common for Hongkongers to do their business in the back alleys. Public toilets didn’t appear until the mid-nineteenth century, and they weren’t widespread until much later. If you need a quick read for your next bathroom break, here is a brief history of Hong Kong’s public toilets. But first, we need to know how the Chinese used to deal with their number ones and twos at home. 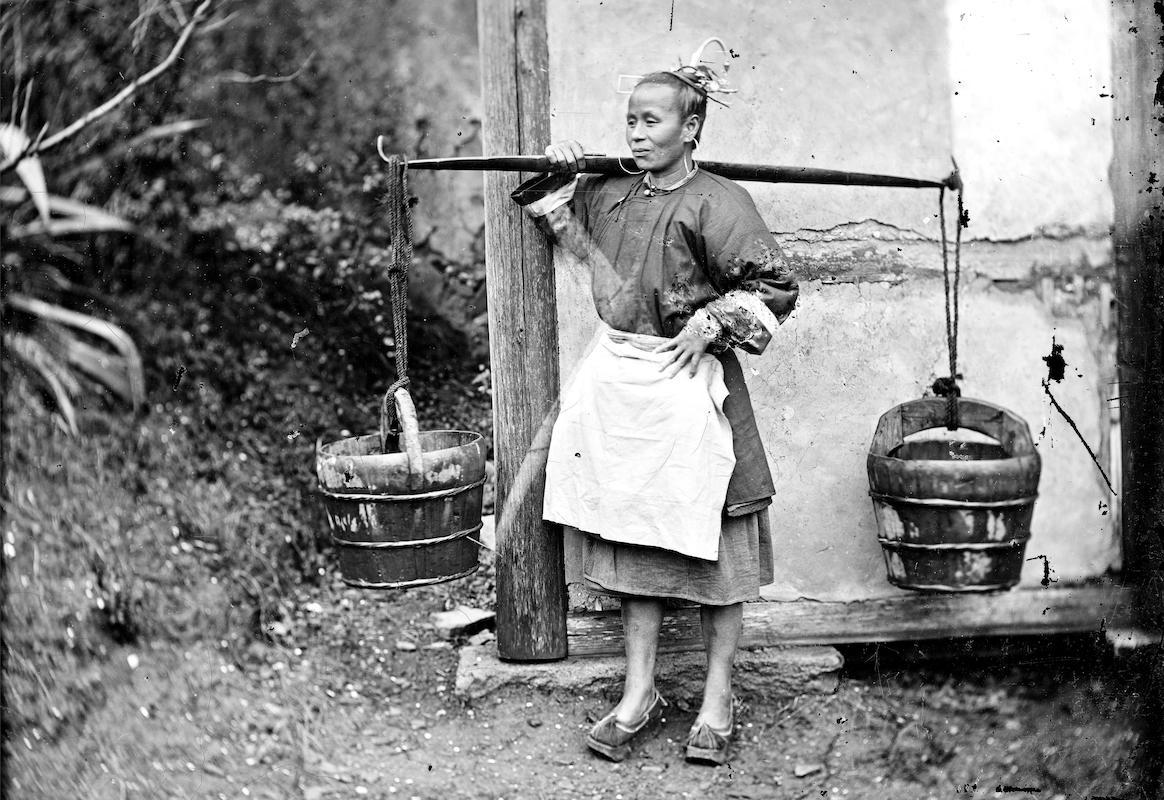 Before becoming a British colony, Hong Kong—like the rest of China—set up outhouses with a hole six feet deep into the ground, in which human excrement was regularly treated with lime (calcium hydroxide) to kill bacteria and prevent odour. When spring rolls around or when the hole is almost full, the accumulated waste was collected and used to fertilise crops. This was especially significant, as it meant that human waste could be turned into a business; people could sell it as a natural fertiliser to farmers in rural areas.

In residences with no space for outhouses or separate bathrooms, the “horse bucket” (馬桶; maa5 tung2) is used instead. Every household had its own wooden bucket, which had to be emptied and cleaned daily—hence the term “dump night soil” (倒夜香; dou2 je6 hoeng1). People called the men and women whose job is to collect night soil by the names of “night soil man” (夜香郎; je6 hoeng1 long4) and “dump poop lady” (倒屎婆; dou2 si2 po4).

With dry toilets and horse buckets being the mainstream, proper drains were arguably non-existent. After the British occupied Hong Kong Island in 1841, multiple colonial surgeons expressed concerns about the unsanitary living situation of the City of Victoria (now Central and Western District), warning that it could lead to an outbreak. They urged authorities to implement drainage and sewerage systems and better paving and scavenging. 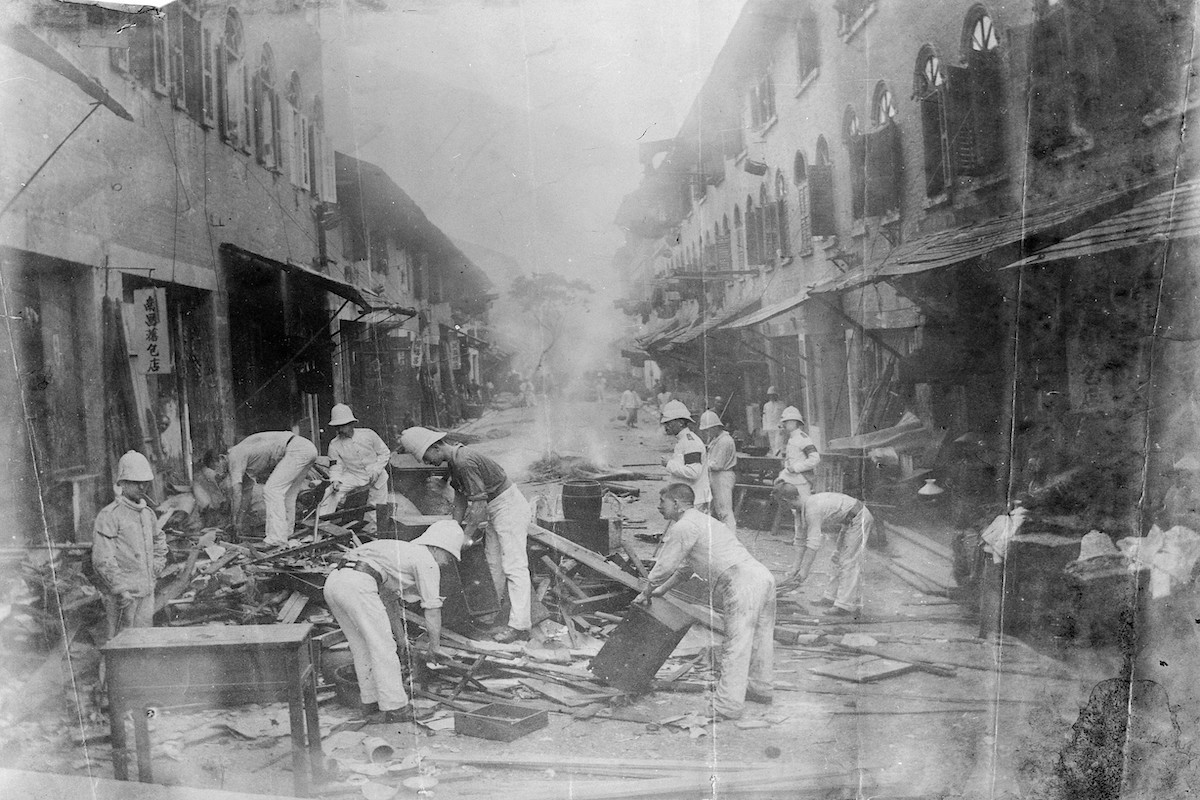 The outbreak of the bubonic plague

Unfortunately, the colonial government failed to solve the issue before it was too late. Sure, the concept of building public latrines and bathhouses was discussed frequently, and the former was provided on a small scale (we’ll touch upon that later), but overall, cost, scarcity of land, and competition with private-owned facilities hindered any further action.

In 1881, British engineer Sir Osbert Chadwick was appointed to inspect Tai Ping Shan District specifically because Sheung Wan was extremely overcrowded and unsanitary at the time. Reporting details on housing conditions and domestic and street drainage systems, Chadwick echoed the former colonial surgeons and recommended a series of changes, but his advice fell on deaf ears, and no public bathrooms were installed.

13 years later in 1894, their predictions came true; an outbreak of bubonic plague occurred, killing over 2,500 people that same year, and continued to sweep through the city for three more decades. As the plague was especially terrible in Tai Ping Shan District—where it first started—the government demolished buildings in the area and rebuilt them. In 1904, it established the first permanent public bathhouse on Pound Lane, which was used by men and women free of charge, and a public toilet at the junction of Tank Lane and Bridges Street.

In the following years, based on Chadwick’s suggestions, the government also implemented separate sewerage and stormwater drainage systems across the city. Change did come, eventually, but at the expense of thousands of lives. 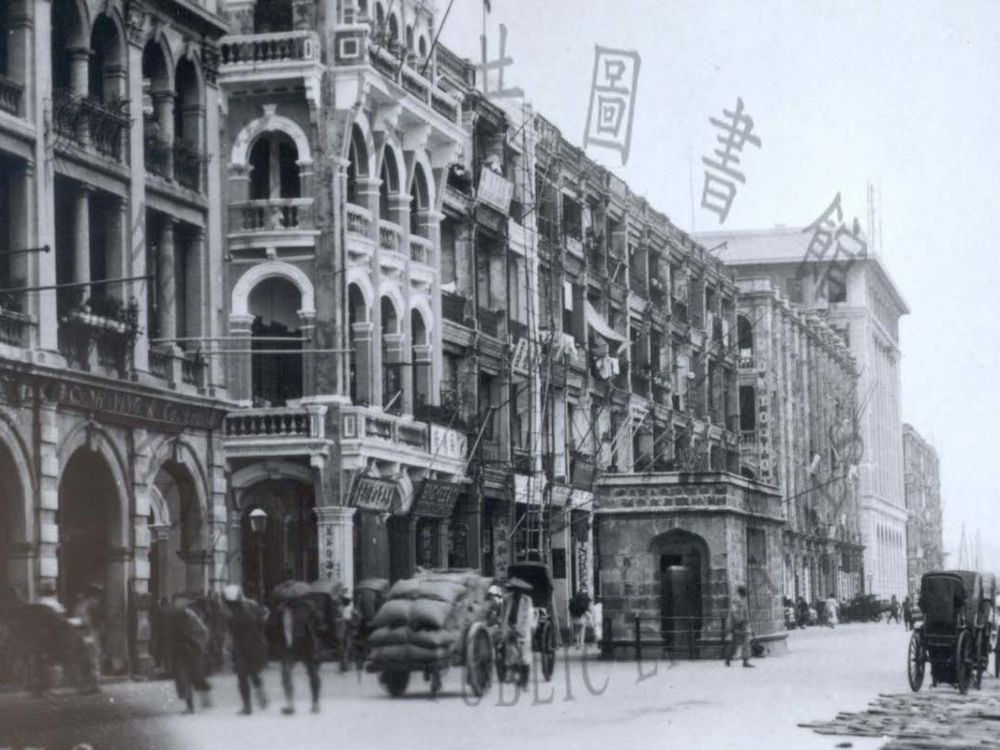 Connaught Road in the 1920s. The small stone structure is a toilet. Photo: Hong Kong Museum of History (via Wikimedia Commons) 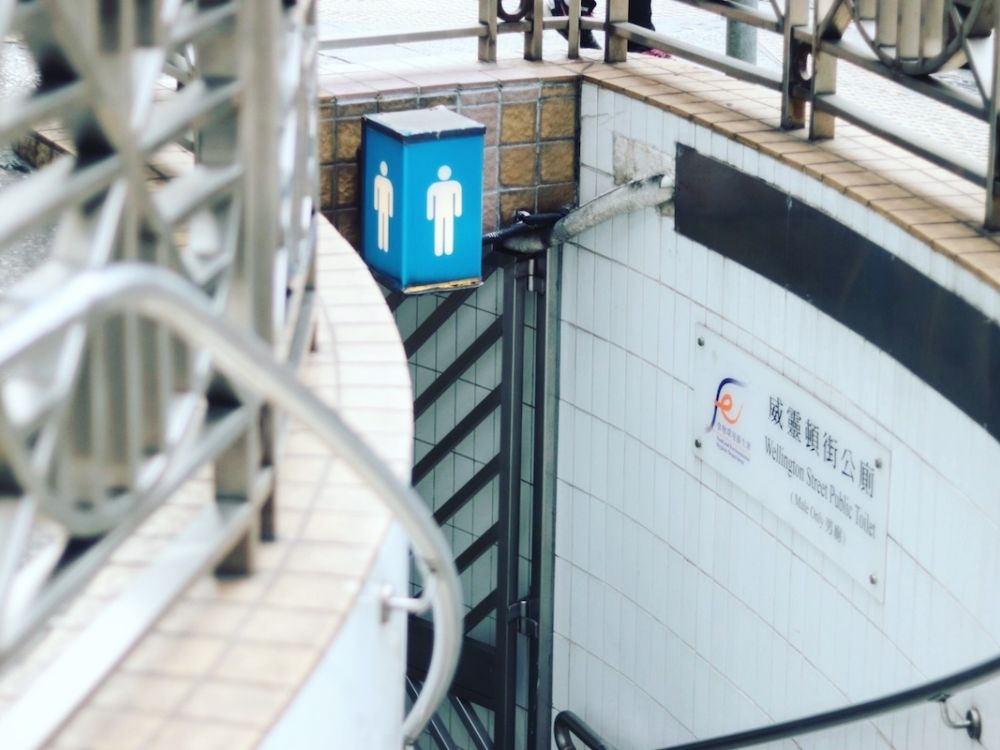 The entrance of the closed-off underground female toilet of Aberdeen Street and Staunton Street. Photo: JUMBAIKTANGM LONA (via Wikimedia Commons)

Going to the bathroom on the down-low

As told in Dr Chong Yuk-sik’s Toilet as Business for the Hygiene of the Chinese Community in Colonial Hong Kong, public latrines run by Chinese landowners dominated the scene in the mid-1800s. They profited by selling night soil to mulberry tree farmers in Shunde to support the booming silk business, and some also charged fees for toilet access. Chong proposed for the government to take charge of public toilets later not because of the bubonic plague, but because landowners stopped operating them as the silk business declined in 1930.

When the British government finally decided to take matters into its own hands, it went on the down-low (literally). In the early 1900s, there was a handful of underground toilets on Hong Kong Island catering to the Chinese working-class men. The stench was unimaginable due to a lack of sewerage pipes, and excrement had to be manually removed.

Today, if you have ever crossed the junction of Wellington Street and Queen’s Road Central, you might have seen a staircase leading down to the last operating underground toilet, sectioned off by metal railings. The rest are all abandoned or filled in, with one on Aberdeen Street—the only one with a female toilet—listed as a Grade II historic building.

Hidden Hong Kong: History of the Hong Kong or... 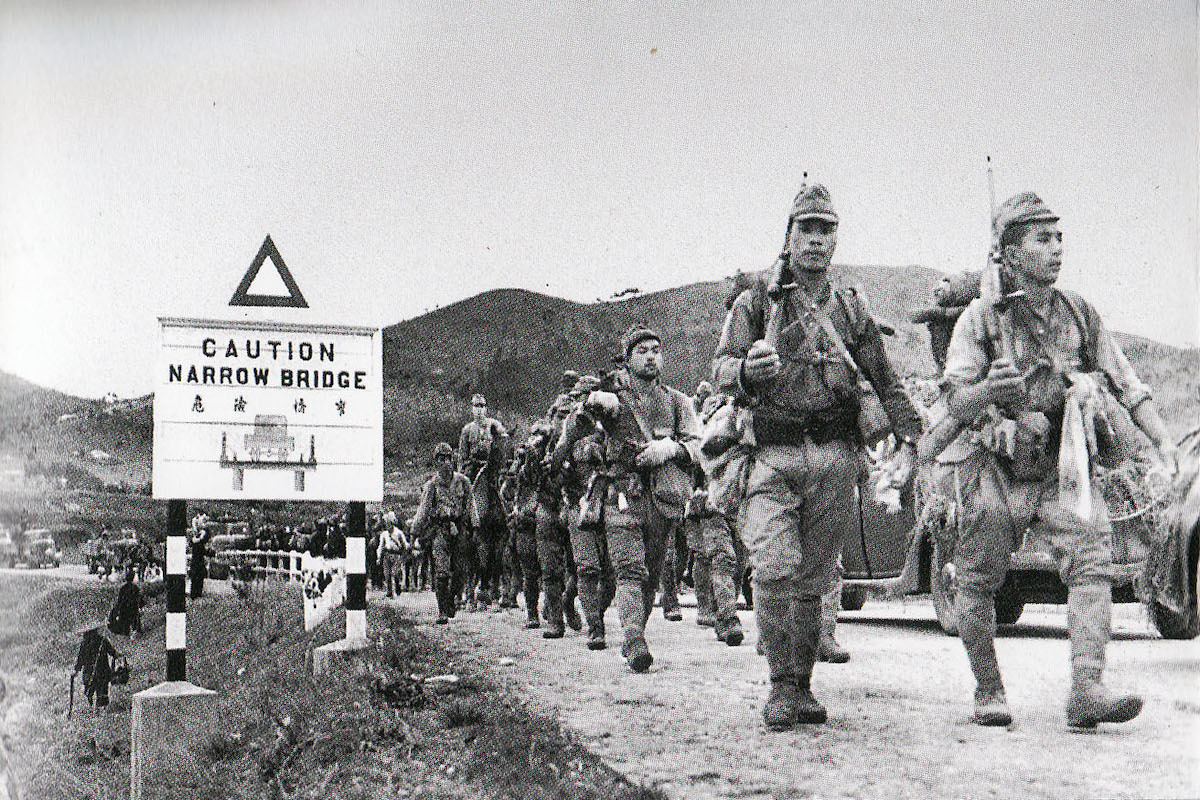 Public bathrooms before and after World War II

The government made various attempts at keeping the streets clean. As early as 1866, it restricted people from defecating on roads, according to Hong Kong historian and writer Ng Ho. However, the number of public latrines—government- or private-owned—was simply not enough. In dire situations, people went to back alleys and relieved themselves there, giving the narrow passageways its nickname of “defecating alleys” (屙屎巷; o1 si2 hong6).

In December 1940, authorities tried to promote flushing toilets to local Hongkongers and ordered all restaurants and cha chaan tengs to install them on or before June 1941. The owners thought this was nonsense and appealed to the then-governor of Hong Kong, claiming that there weren’t enough municipal drains to support the system.

The good news is that the governor listened and immediately initiated the construction of more drains, but the bad news is that World War II happened. During World War II, the Japanese occupied Hong Kong, and there was practically no infrastructural advancement. With the drainage system left unattended, sanitary problems and environmental pollution increased. Besides, the population also rose dramatically in the few years after the war.

A New Life Evening Post column on 23 April 1946 reported that the government restricted people from urinating and defecating on roads again, but because no one wanted to use the shabby public toilets, they placed a penalty of $250 to punish wrong-doers. After receiving criticism for not treating sewage before it discharges into the sea, the government built the first screening plant in 1956. It continued to implement new sanitation schemes, including rebuilding the Pound Lane public bathhouse into a public-toilet-slash-bathhouse in 1961. 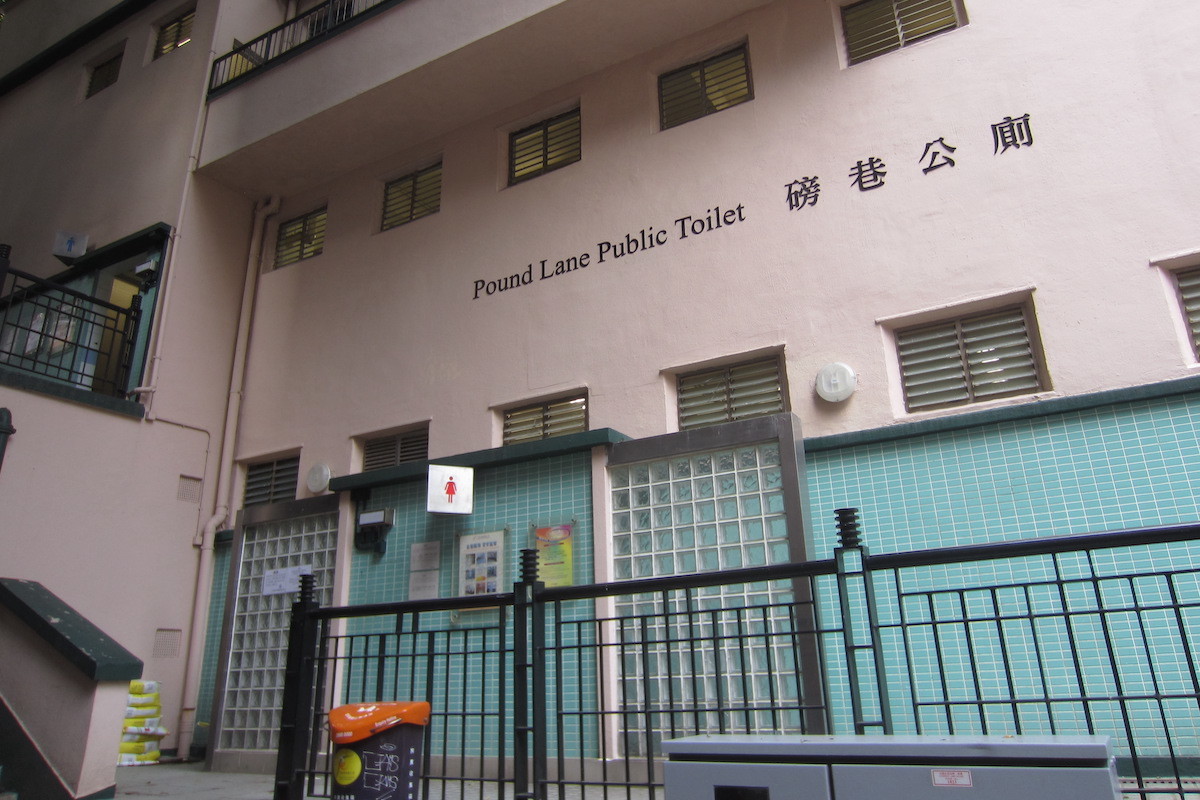 The Pound Lane Public Toilet before its $8 million refurbishment in 2021. Photo: Another Believer (via Wikimedia Commons)

From then on, action to improve sanitation and hygiene across Hong Kong was carried out actively. Based on the “White Paper: Pollution in Hong Kong – A Time to Act” summary published in 1989, authorities created Sewerage Master Plans (SMP), gradually building more treatment works and pumping stations. They strove to improve the condition of public toilets, from refurbishing facilities to turning flushing trough toilets into squat toilets.

When the Food and Environmental Hygiene Department was created in 2000, governing public toilets became one of its responsibilities. It sought to switch all aqua privies—village-type dry toilets with no flushing system most commonly seen in New Territories—to flushing toilets, spending hundreds of millions of dollars on the 10-year project.

But our journey to modern plumbing is not yet over—the Hong Kong government is still investing in new toilets and renovating old ones today. From defecating alleys to million-dollar bathrooms, our city’s public toilets have truly come a long way. Thank goodness! 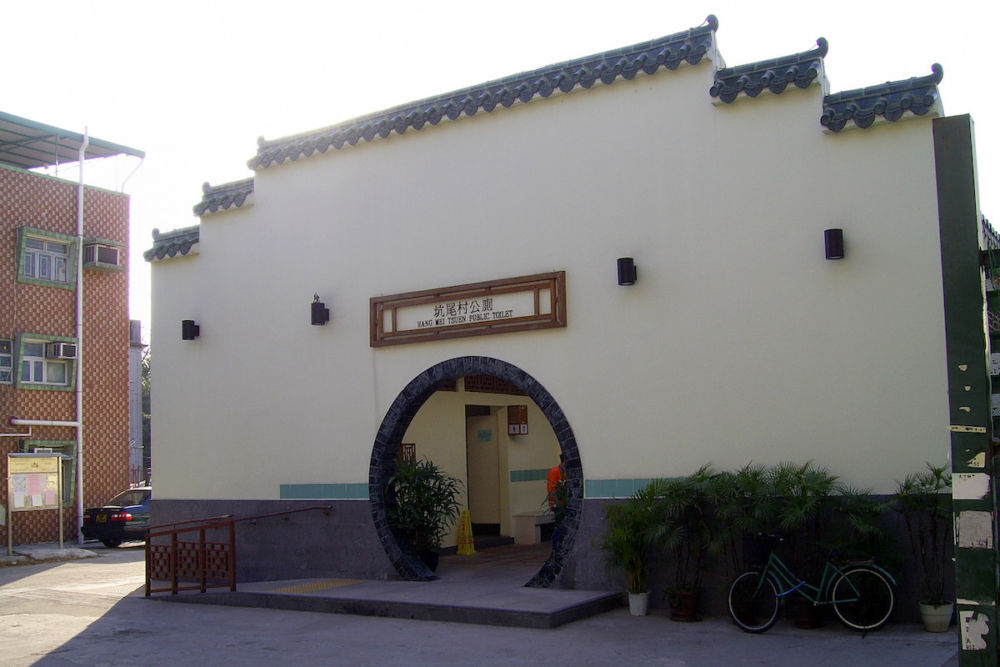 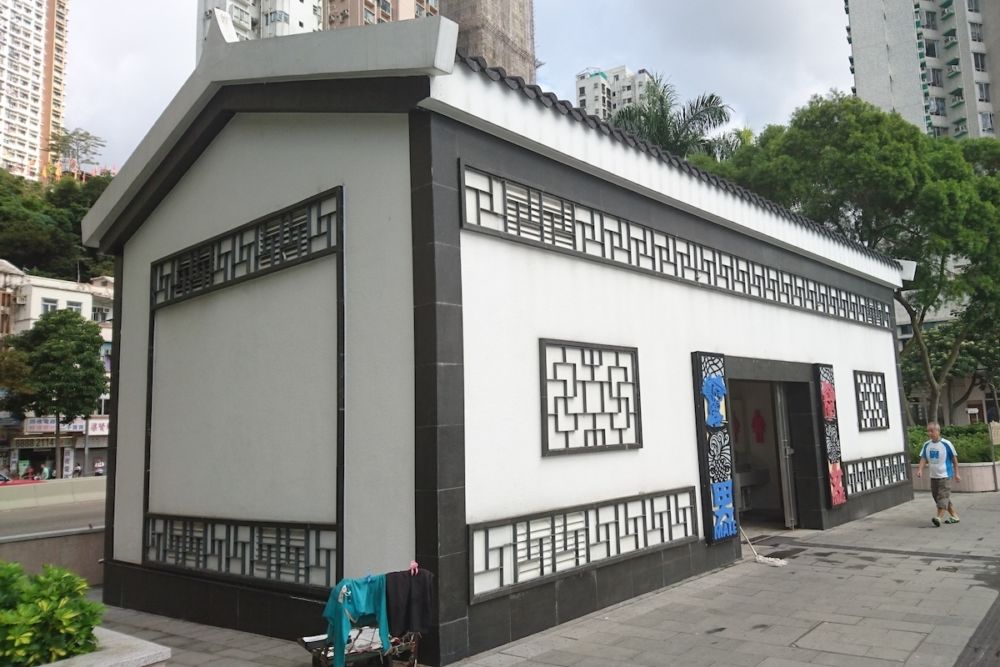 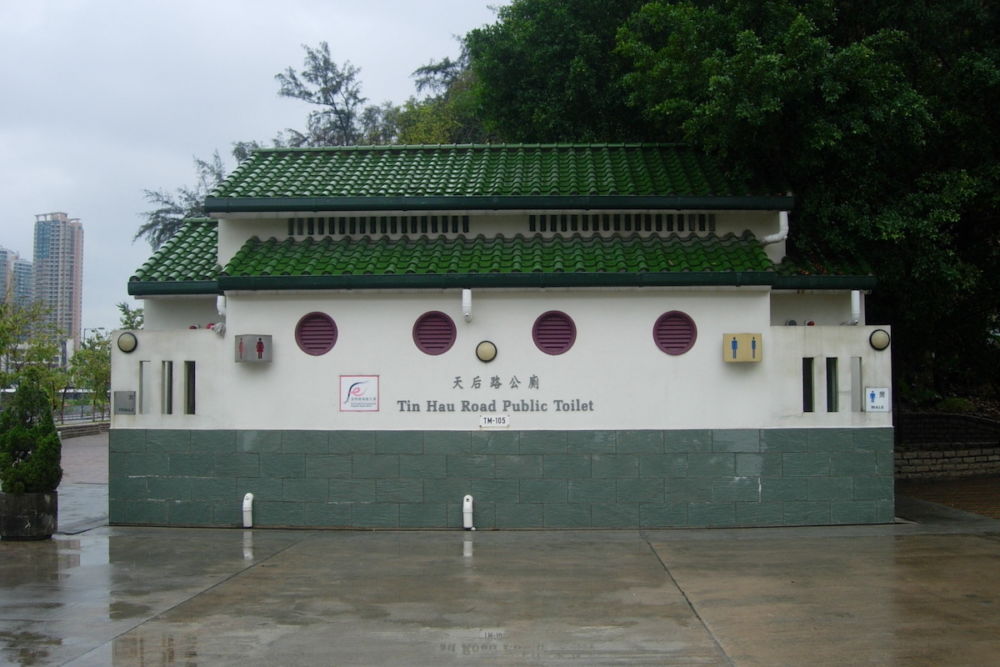 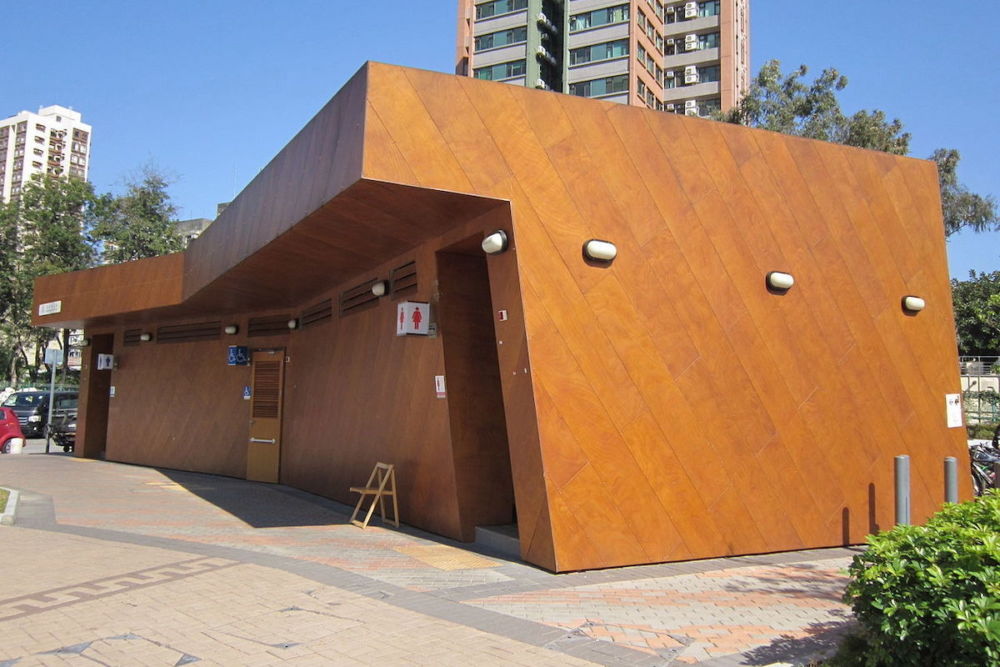 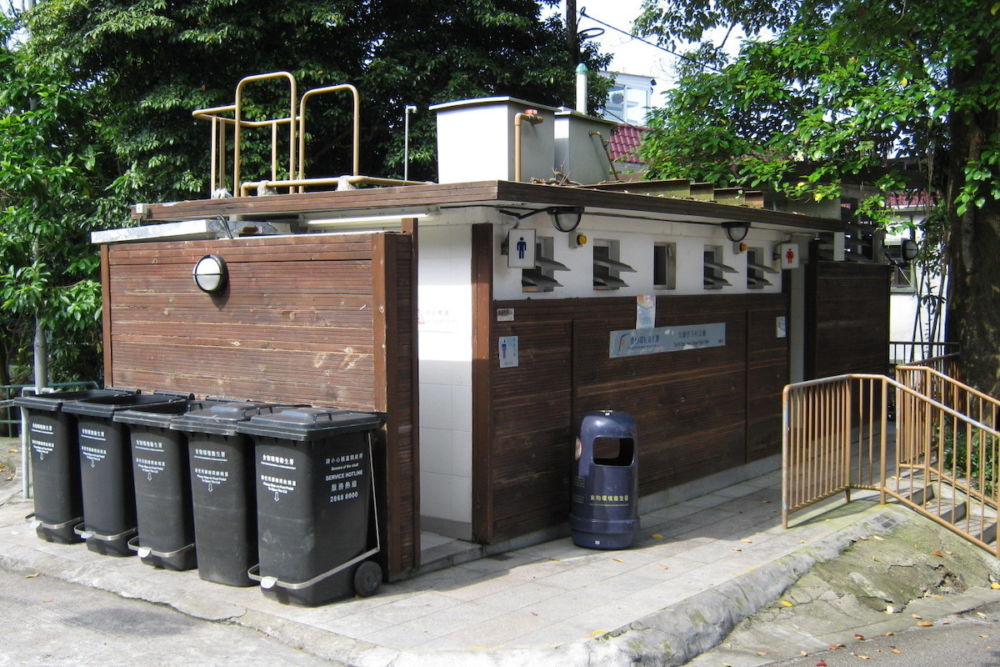 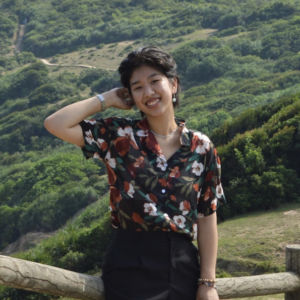 A laidback grandma at heart, Gabriella loves to crochet, bake bread, and play Solitaire while listening to her 78-hour-long Spotify playlist. She enjoys all the simple things in life, but is also down to go crazy once or twice (or thrice) in a while.