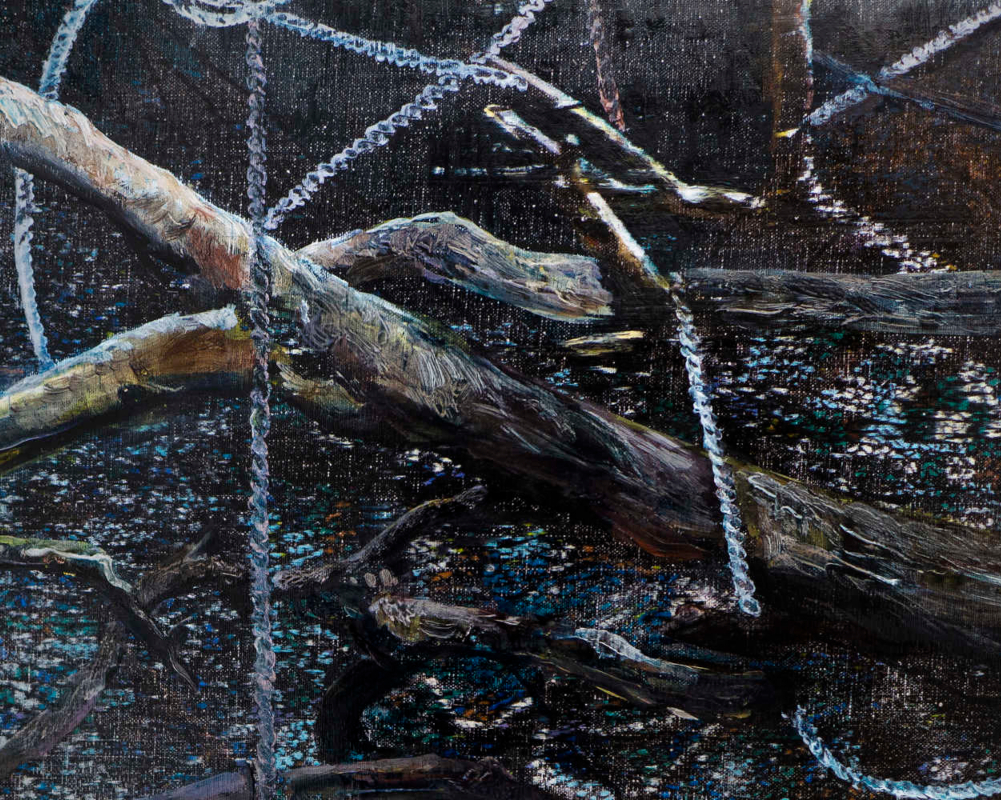 Tens of thousands of minuscule mosaic tiles, reflecting just as many tones of blue; shade nets intertwined with one another, resting upon dead branches, forming multi-layered matrixes; aged grease stains and dust, rendering window screens turbid yet thinly transparent – being obsessed with and almost paranoid about polishing such details, Yuan Yuan depicts most patiently and rationally an uncanny realm, merged in which are displaced scenes, fantasies based upon reality, personal experiences, and the singular aesthetics of immanence of the artist.

From 1992 to 2003, Yuan Yuan spent eleven years in the oil painting department at the China Academy of Art. A skilful painter, Yuan is able to delineate with great precision any specific form. He is, however, not a realist painter, and does not want to be confined to classical aesthetics. Yuan is interested instead in exploring layers of colours with various painting knifes, and in filling gaps in a figurative composition with abstract details. Surrealist dreams expand on his canvas, interchangeably co-existing in which are the decayed and the grandiose, the complex and the orderly, the tranquil and the tumultuous, the transient and the eternal. Painting is Yuan’s only chosen form; for Yuan, art is an enclave in reality, a borderland where controversies and clashes are allowed. As soon as the artist starts working on his art, he becomes the voice of the enclave.

Yuan Yuan moved to Germany in recent years and has established his permanent studio in Berlin. Just like other artists from all over the world who reside in Berlin, he is attracted by the unique, free cultural atmosphere, the specific socio-political history, and the independent, forward-thinking mentality of the city. Arriving in Berlin, Yuan looks forward to a new level of artistic creation, the starting point of which is marked by the exhibition Irregular Pearl.