Fight like a Girl – Is Muay Thai just for Men?

By priyanka_boghani 3 September 2013
share:
Amid the glossy buildings and under the corporate fabric that constitutes Hong Kong city, is a growing den of Muay Thai gyms. They’re usually small and stuffy, tucked away in mid-rise apartment blocks with barely enough room for a ring and a few changing rooms. They’re also mainly filled with men. 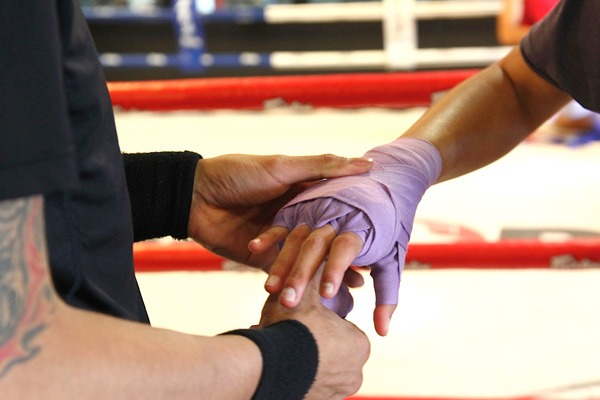 Realising the need for spacious training areas and a female-friendly environment, Billy Tam, a former architect, set up Warrior Muay Thai, a 4,000 square foot urban gym in North Point that prides itself on its unisex approach to training. The 16th century Thai combat sport is traditionally male-dominated, but what better way to find out whether Warrior really is female-friendly than to actually try it myself?     The Setting The lift opens up to a well-lit lofty space, a dynamic “lab for fitness” shared with Coastal Fitness. There’s a glass panel dividing the weight training and the Muay Thai ring, both of which overlook Victoria Harbour and the city’s urban sprawl of skyscrapers. After handing me a locker key, towel and two balls of rolled up cloth to wrap around my hands, Billy reassures me that I’m not out of my depth. “People think Muay Thai is an aggressive sport, but when you start to understand it as an art form that’s developed over thousands of years, you realise it’s more than a sport - it’s developed its own culture,” he said. “We wanted to cultivate a community here that wasn’t too testosterone-heavy so that women who love fitness and are interested in Muay Thai would feel comfortable,” continued Billy. “We have a pantry, comfy couches and even a female Muay Thai instructor, which is quite rare in Hong Kong.”     The Warm Up Tam, our class instructor, rallies past our group of four girls and five guys as we prepare to warm up before the class. He bows in the traditional Thai style and proceeds to demonstrate warm-up stretches. It’s clear from his impeccable physique that he’s a former Muay Thai fighter from Thailand. He speaks in broken English, focusing more on gesturing to the parts of the body he wants us to work. Although it’s clear he can pack a punch or two, he smiles and jokes with us throughout. Thankfully, he recognises that I’m new and gives me additional guidance in between his demonstrations. He shows me how to wrap the cloth around my hands and lift my right heel in the correct stance. 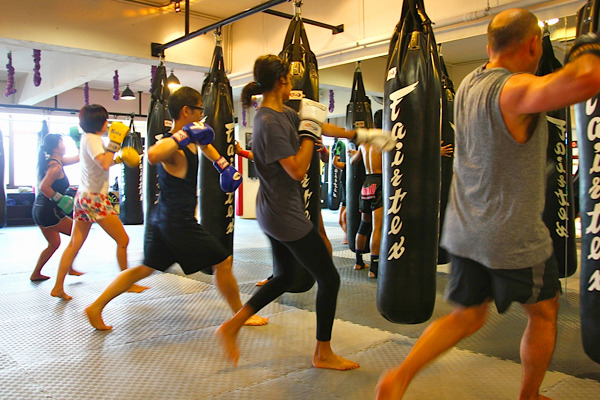 The Gloves Come On! The next thing I know, I’m in the ring with the second Thai instructor, Jonny, who grins infectiously while instructing me to kick him. He shows me how to glide across the ring while protecting my face, and to use the ‘Art of Eight Limbs’ to attack. He sways gracefully with each movement as he dances in circles around me, explaining that in Thailand’s national sport, hands, elbows, knees and feet are the eight points of contact that fighters use; the entire body is used like a weapon of war. Everyone in the class gets the chance to train one-on-one in the ring with Jonny. In between, Tam shows us how to attack the dangling punching bag at different heights. With each punch and kick he yells, “PUSH!” and encourages us all to do the same in unison. The word “Muay”, he later tells me, comes from the Sanskrit word “mayvya”, which means “to bind together”. It’s this strength from unity that Tam is trying to cultivate in his classes. 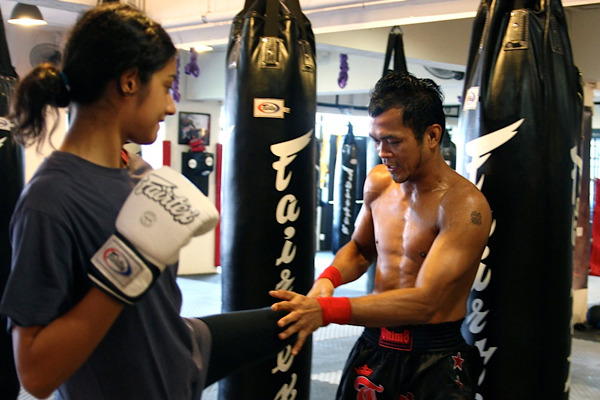 The Warm Down Tam’s enthusiasm takes us right through to the end of the class, when we form a circle for warming-down stretches. Finally, he bows and smiles, before dramatically swinging his left leg high over a fellow fighter’s head, forcing her to instinctively duck in defence. He laughs, pats her on the back and announces that the class is over.     The Verdict All in all, I found Muay Thai to be an enjoyable and empowering workout. There was plenty of space to practice your kicks and punches and everyone was treated equally. In fact, 60% of Warrior’s clients are women.

“It’s a great place for women in Hong Kong to get the real deal and learn some self-defense,” Billy said, on his quest to shatter the stereotype that Muay Thai is just for men. After I recover, I’m hoping to go back and prove him right.