Ever since the explosion of tourism in Thailand, which happened sometime in the 1980s, Thai cuisine has established a strong foothold among international food connoisseurs. It is recognised internationally for its bold and refreshing blend of aromatic herbs and ingredients and for its meticulous cooking methods, which involve getting the ratio of each flavour absolutely right. Every Thai meal is endowed with a prominent hint of sweet, salty, and tangy flavours and the perfect balance of these flavours is what makes it ultra-satisfying to any palate.

Historically, the people from Southern Chinese provinces, who emigrated to Thailand centuries ago, left a strong influence on the cuisine of Thailand. In a distant past, Buddhists monks, originally from India, brought the Indian influence with them. The fragrance, flavours, and colours of several Muslim states in Asia also transcended the geographical borders to reach and influence Thai cuisine—thus resulting in a perfectly balanced, rich, and colourful fusion of gastronomic influences from around the world. So, here’s a rundown on authentic must-try dishes from this beautiful land of smiles, stunning beaches, and some sensational recipes. 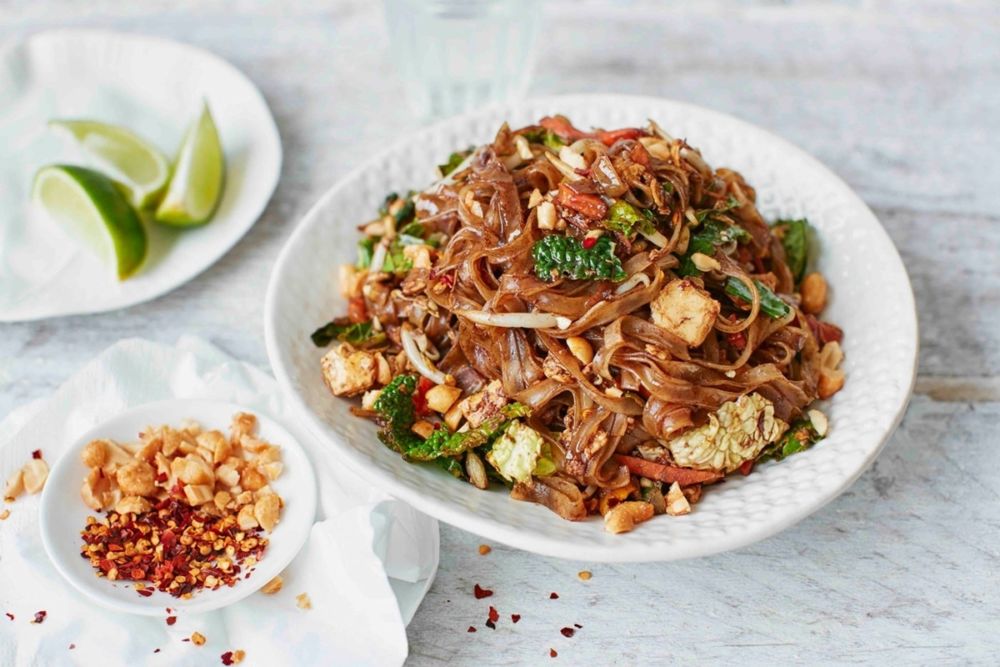 Let’s start with a top-seller. It is a well-liked Thai dish by locals and tourists alike and people from across the world make it a point to check off this dish from their must-try Thai food bucket list. So perhaps, for once, we should call it by its proper traditional name—guay teow pad thai (ก๋วยเตี๋ยวผัดไทย; Thai stir-fried noodles). The roots of this dish date back to 1930s when Thailand’s former military officer—Plaek Phibunsongkhram—took charge as Thailand’s prime minister. In an attempt to safeguard Siam’s independence, he ordered the creation of a national dish—pad thai. 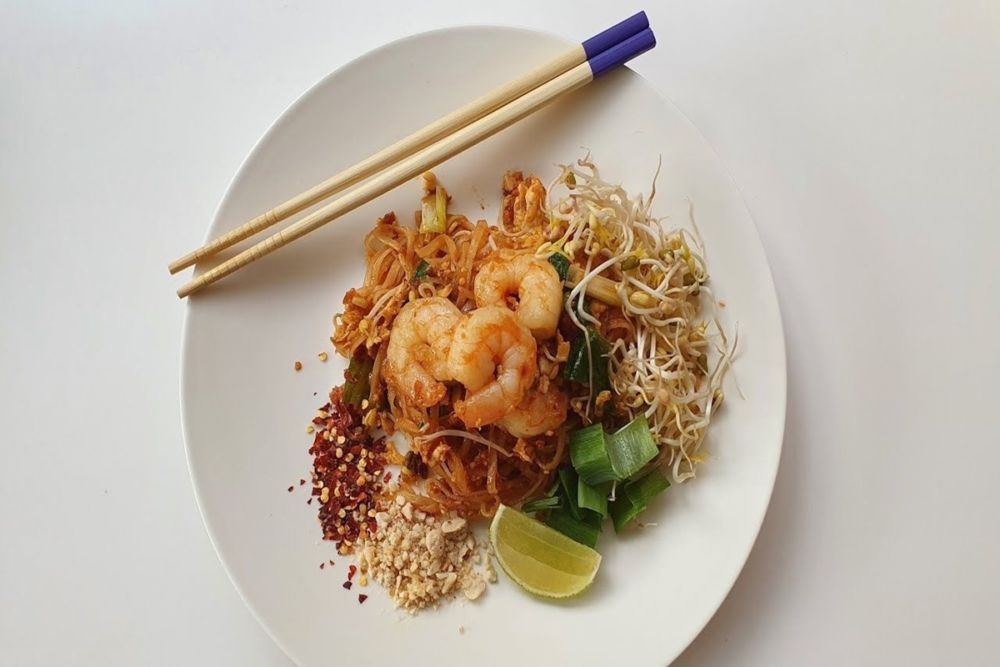 While the cooking process itself is a matter of a few minutes, it is the prep work that takes up all the time. There is a lot to do before you fire up your wok but the good part is, none of it is difficult, just time-consuming.

The recipe starts with stir-frying minced garlic and meat, and vegetables of your choice, that typically include prawns, beaten egg, broccoli, bok choy, and beansprouts in a large searing hot wok, followed by addition of softened noodles, and a topping of a sauce made of melted palm sugar, fish sauce, and tamarind paste. Roasted peanuts and fried and dried shrimps are also added as flavour enhancers.

For a kitchen novice, it may look like a long list of things to do but it’s really just an easy and straightforward recipe if you have all the ingredients. For most Thai homes, it is a quick weeknight meal using pantry staples and for seasoned local vendors, an instant recipe to becoming a crowd favourite. 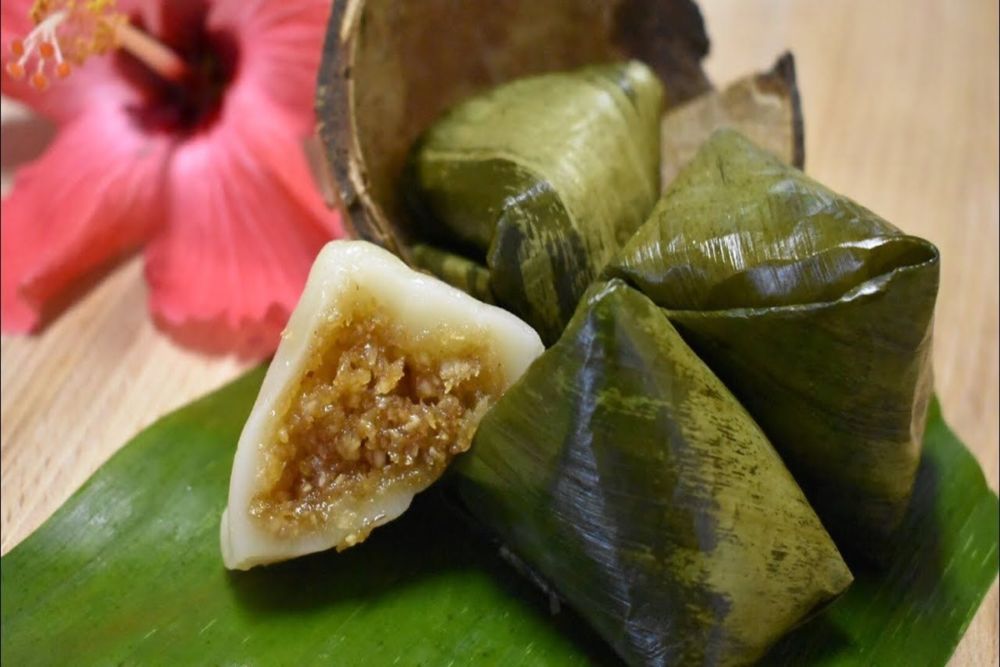 When we think of Thai cuisine, the first thing that pops into our mind is a steaming hot bowl of bold and spicy goodness in the form of tom yum (ต้มยำ; hot-and-sour Thai soup) or the creamy, slightly sweet, and very fragrant mix of herbs and aromatic in a coconut-based curry called Thai green curry. However, there is so much more to it than the highly improvised versions of these popular dishes to suit a non-native palate.

Kanom tian (ขนมเทียน; Thai stuffed dough pyramid dessert) is one such recipe which hasn’t caught the mainstream attention yet but forms an integral part of communal activities and rituals. It is usually prepared and consumed during religious festivals including the Festival of Ghosts, Songkran, and the Chinese New Year. Contrary to the popular belief that associates Thai recipes with an endless list of ingredients, you’d be pleasantly surprised to know how the mix of just a few typical components could magically transform into one absolutely mouth-watering comfort food.

We start by cooking freshly grated coconut with jaggery or cane sugar on high heat. The dough is then prepared from sticky white rice flour. The dough is then filled with the coconut and jaggery mixture, shaped into a golf-sized ball, and then wrapped neatly with pre-washed and cut banana leaves. With this, the hard part is over. The intricately wrapped pyramid-shaped dough dumplings are then ready to be steamed and devoured. 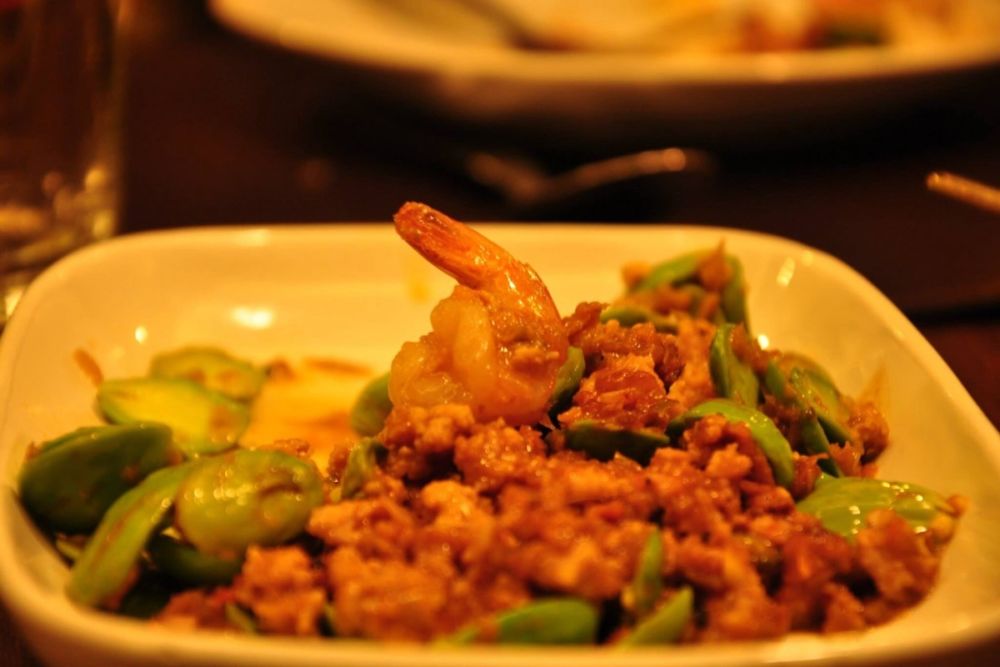 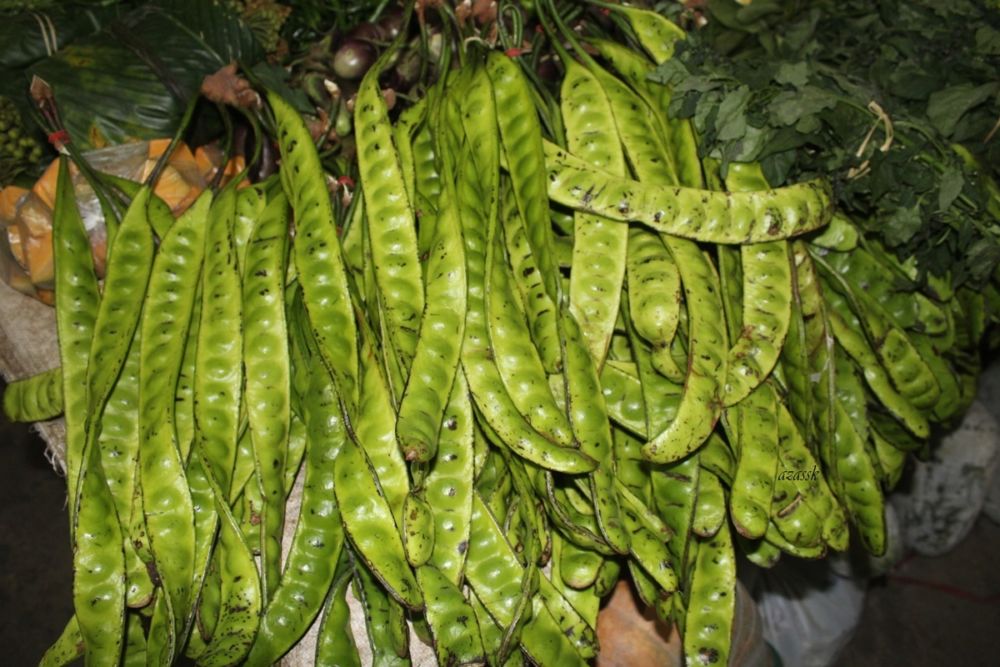 For those who have tasted this dish, the name will probably bring back some unpleasant memories of strong odours and an unappealing appearance. Sataw pad kapi goong (กุ้งผัดสะตอ; stir-fried Thai stink beans with shrimp) is an acquired taste—it isn’t visually stimulating and by no stretch of the imagination, can it be called an aromatic mouth-watering treat. So, why does it deserve a mention you ask? Sataw pad kapi goong is a culinary delight for a more refined palate and once you get past the pungence and the appearance, you will come back for more.

Sataw (สะตอ; Thai stink beans) are largely cultivated in the south of Thailand. Needless to add, they are predominantly featured on the menu of southern Thai restaurants. As the name suggests, their smell is likely to drive you out of the house, but the taste isn’t as strong as the smell once you cook them. And the result is a funky combination of sour, salty, and spicy flavours. 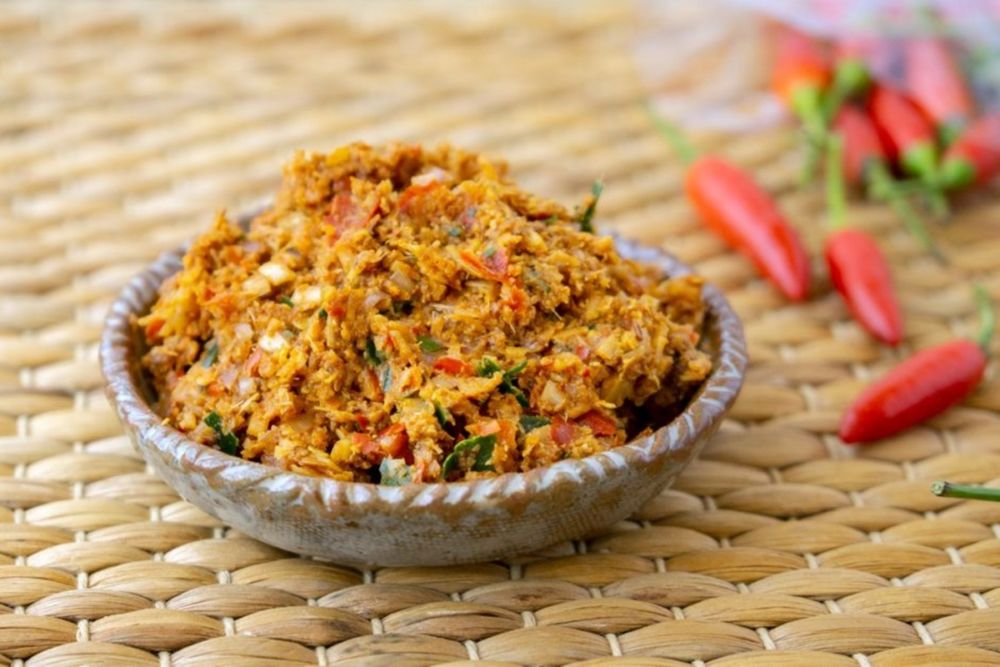 Sataw pad kapi goong is prepared by making a base of grounded white pepper, garlic, bird’s eye chillies, and coriander roots. In a steaming hot pan, this paste is then sautéed until the raw flavours disappear and the heat is cranked up before adding in the seafood of your choice, onions, pepper, garlic paste, and a fermented shrimp paste—yes, that’s another pungent flavour enhancer that comes into play here.

At this stage, you will probably be compelled to ask: Why do people gravitate to such malodorous foods in the first place? Nonetheless, the dish has a staunch fan base and there’s a good reason for it. Once you take a bite of this extremely satisfying plate, seasoned with fish sauce, sugar, and lime juice, the odour will take a backseat and you will be left with a mouthful of flavour explosion and an amusing story to tell your friends at a dinner party. 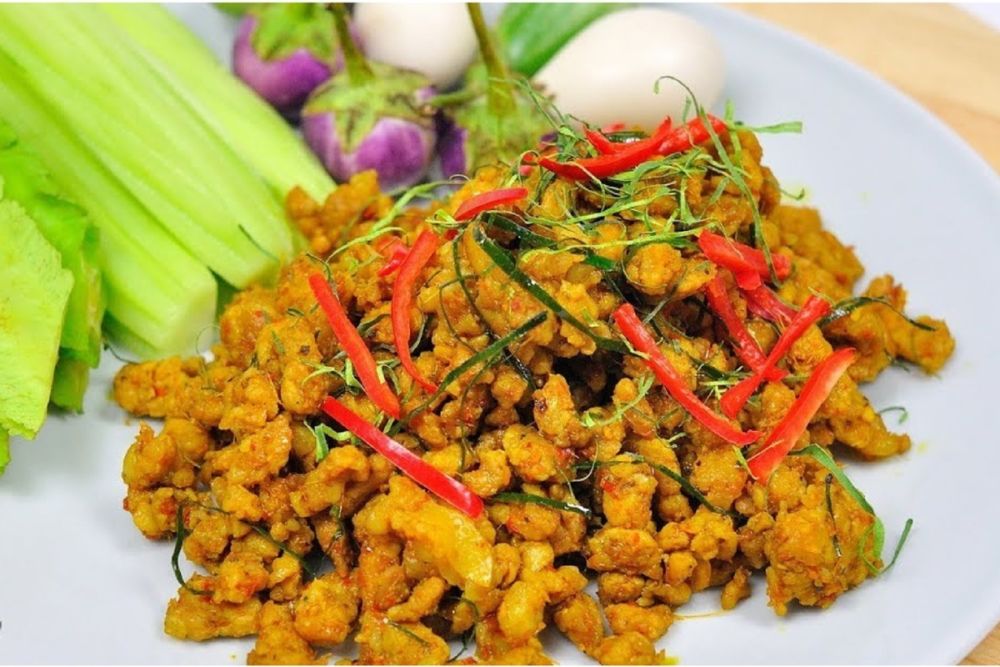 The uncompromisingly volcanic level of spice is always the primary talking point before sampling this dish, but the deft handling of fresh ingredients along with juicy and chunky pieces of pork makes it all worth it. Tuck into this southern Thai signature dish only if you can handle the spice, as the heat level is turned up by several notches.

Khua kling moo saab (คั่วกลิ้งหมู; Thai dry meat curry) literally translates to the stir-frying, tossing, and rolling of pork meat, involving little to no water while cooking but a whole lot of chopped Thai red chillies. This southern Thai classic varies significantly from the food from other parts of Thailand as you can taste a bit of South Asian and Middle Eastern flavours with every bite. So, if you are up for some adventurous Thai cuisine, do not give this a miss. 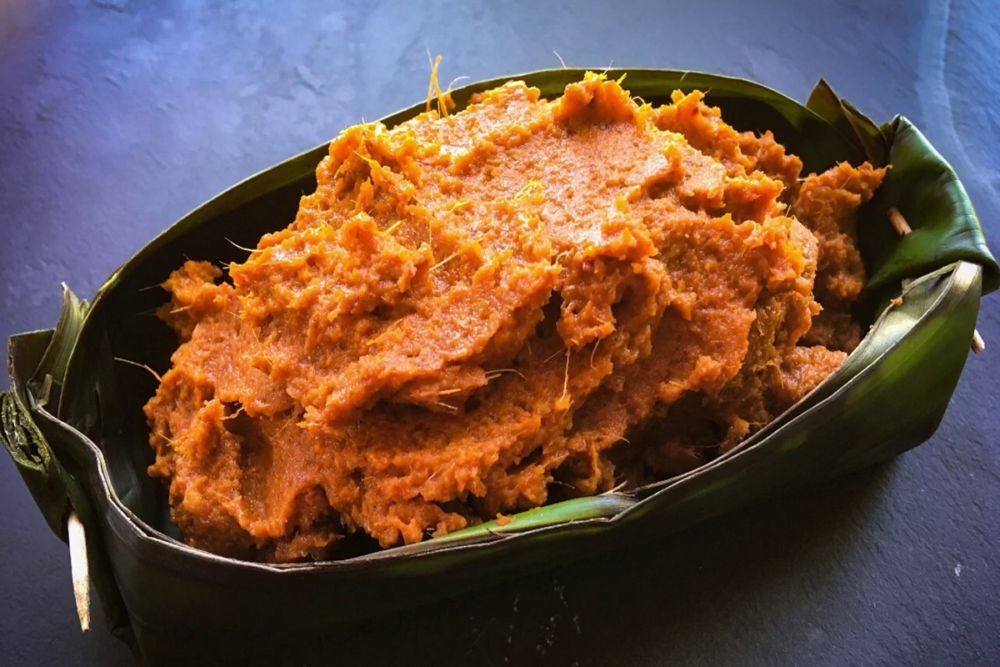 The dish is made simply by frying and tossing minced pork loin, and seasoning it with some essential Thai pantry basics such as fish sauce (which adds a fantastic umami flavour base), palm sugar, citrusy-scented kaffir lime leaves, and southern style curry paste—made of dried Thai chillies, fresh red chillies, loads of garlic, shallots, and a generous spoonful of shrimp paste, turmeric, and white pepper.

There is nothing not to like about this dish, except for the fact that if you do happen to accidentally bite into one of the red chillies as it is, there is really no way to mollify the massive spice-assault. That being the case, the dish is best served with a big plate of fresh cucumbers, tomatoes, and boiled rice to ward off the kick from the heat. 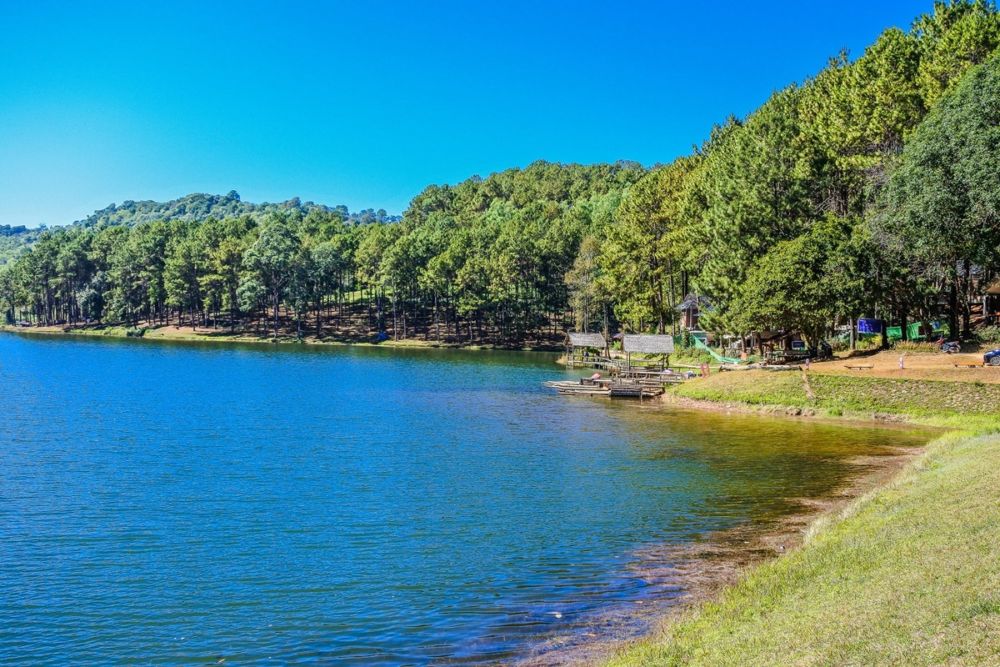 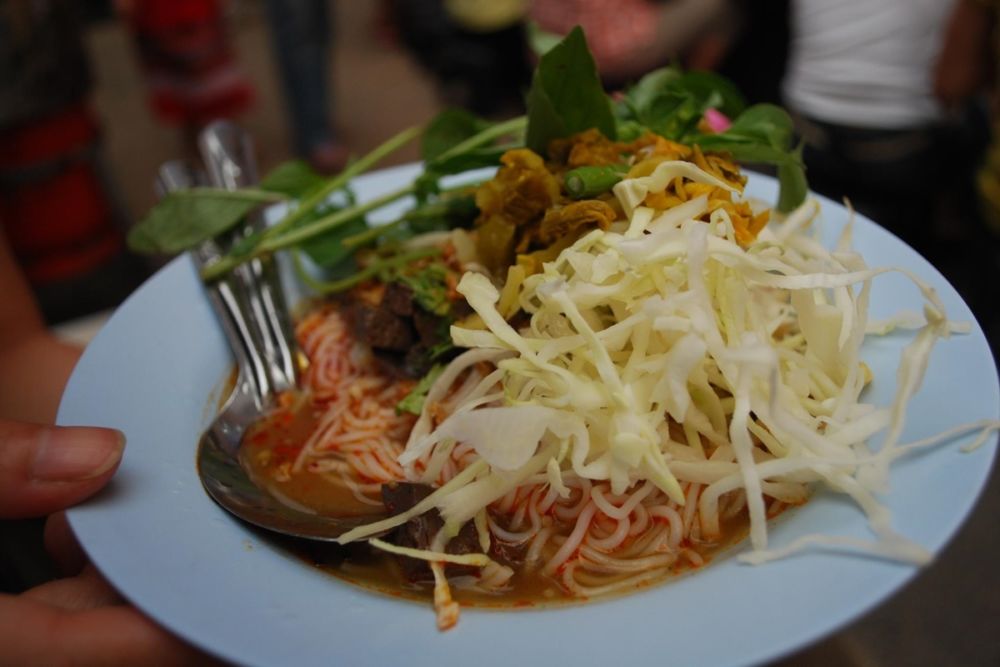 A trip to Mae Hong Son, set deep in the layered valleys almost always wrapped in dense shadowy mist, will serve as quite an eye-opener for ethnic food exploration in Thailand. Despite the tourism boom, the area remains largely uncharted and so are its recipes that are Thailand’s best-kept secrets.

In northern Thailand, the enduring legacy of Tai Yai people from the northeast of Burma, who emigrated to this region several years ago, continues to thrive through its distinctive cuisine. The food here in these hilly and misty regions is as vibrant as its landscape and khanom jeen nam ngiao (ขนมจีนน้ำเงี้ยว; Thai spicy noodle soup) is a homage to its rich culture.

What’s not to like about his dish? It’s packed with freshly made rice vermicelli noodles, dipped in a hearty, uber-satisfying broth made of fruity tomatoes for a depth of sourness, crispy roasted shrimps or fried dry chillies, and garlic for a hefty dose of spice. This bowl of sunshine is then topped with marinated pork balls, bean sprouts, pickled cabbage, and lime to pack a punch when it comes to delivering on the rich Burmese-inspired flavours. 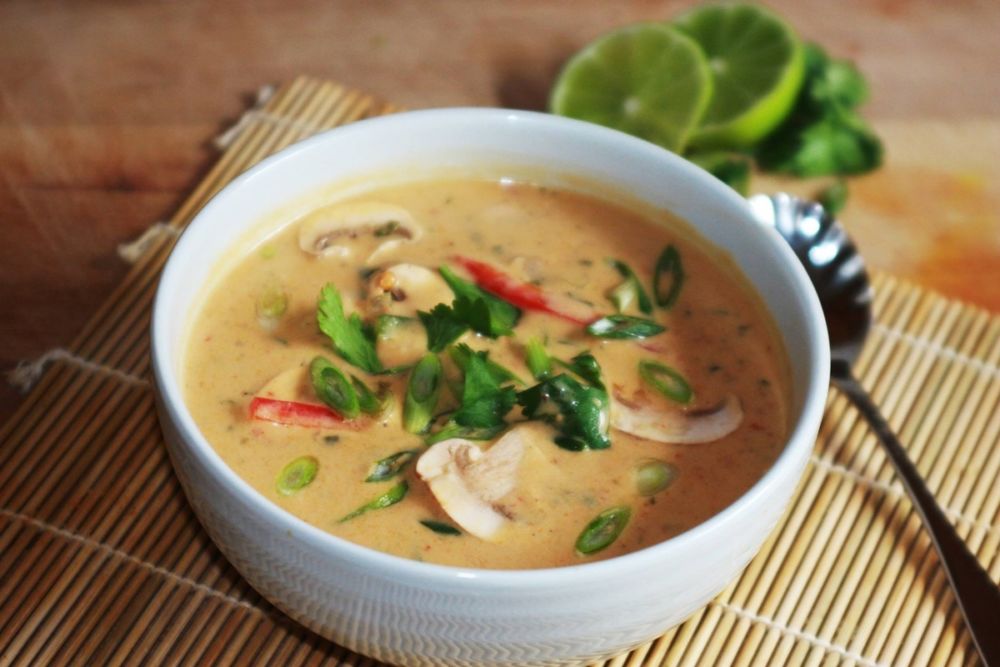 Tom kha gai (ต้มข่าไก่; Thai coconut soup) is the pride of the north and is strongly influenced by the neighbouring region of Laos. It’s light yet creamy, sweet yet slightly sour, and pungent yet bursts with floral citrusy flavours—this soup is one of the most precious gifts of Thai cuisine to the international culinary landscape and has gained a considerable fanbase around the world for its ability to suit the palate of even the pickiest eaters. You can either take the spice level down a notch by cutting down that punch of heat from Thai red chillies or spice it up by adding a ton—you will love this soup no matter how spicy or mellowed down it is. 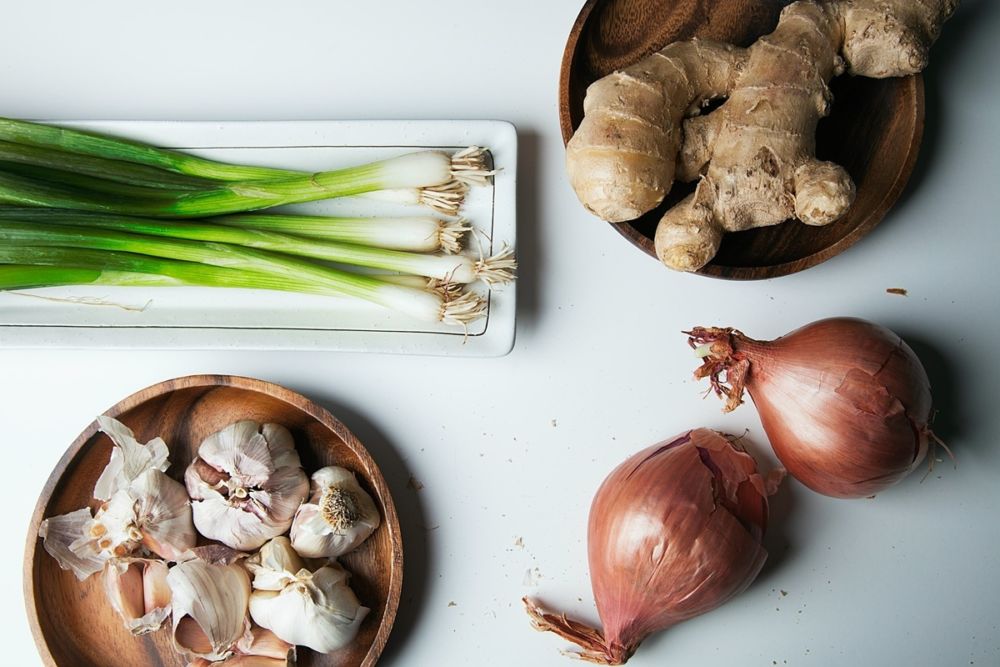 A rich and creamy coconut milk-based broth and a hefty dose of lemongrass and galangal—a stronger and more fragrant version of ginger and a secret ingredient that takes it all the way to the next level—constitute the primary flavour base for this dish, reminiscent of Lao culture and traditions.

It starts by pounding and sweating some garlic, galangal, shallots, lemongrass, and chillies and frying this paste with chopped onions in a large saucepan. It is then followed by adding juicy bits of chicken and the chicken broth and simmering it for a good 30 to 60 minutes. A final addition of coconut milk not only brightens up the whole dish but also balances the spiciness.

There’s nothing quite as comforting as a big bowl of this soup to warm you up on a winter night or brighten up gloomy rainy days—tom kha gai is comfort food at its finest and a great way to draw the curtain over your Thai food journey! 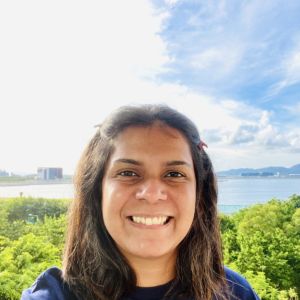