Japan, as a whole, has long held an immense fascination with cats. Nowadays, this is pretty easy to see—from their cat cafés to cat station masters, and, of course, their iconic Hello Kitty merchandise. And this is not just a contemporary phenomenon; the extent of Japan’s cat obsession is actually well-documented throughout their history, especially with the numerous volumes of artwork featuring cats as the main subject. They have even appeared on feudal ukiyo-e (浮世絵; a genre of Japanese art, where artists produced woodblock prints and paintings), dating from the Tokugawa period (徳川幕府) from 1603 to 1868. As this genre of Japanese art often displays scenes from history and folklore, it stands to reason the reputation of cats is mainly a positive one—that of protection and good fortune.

There’s no surprise that maneki neko (招き猫; “beckoning cat”), the instantly recognisable figurines of smiling kitties, are ubiquitous in Japan, as are places where one can go play with kitties. For all you feline lovers out there who want something slightly more rustic and adventurous, the iconic “Cat Islands” of Japan—Aoshima (青島) and Tashirojima (田代島)—are great spots to check out. 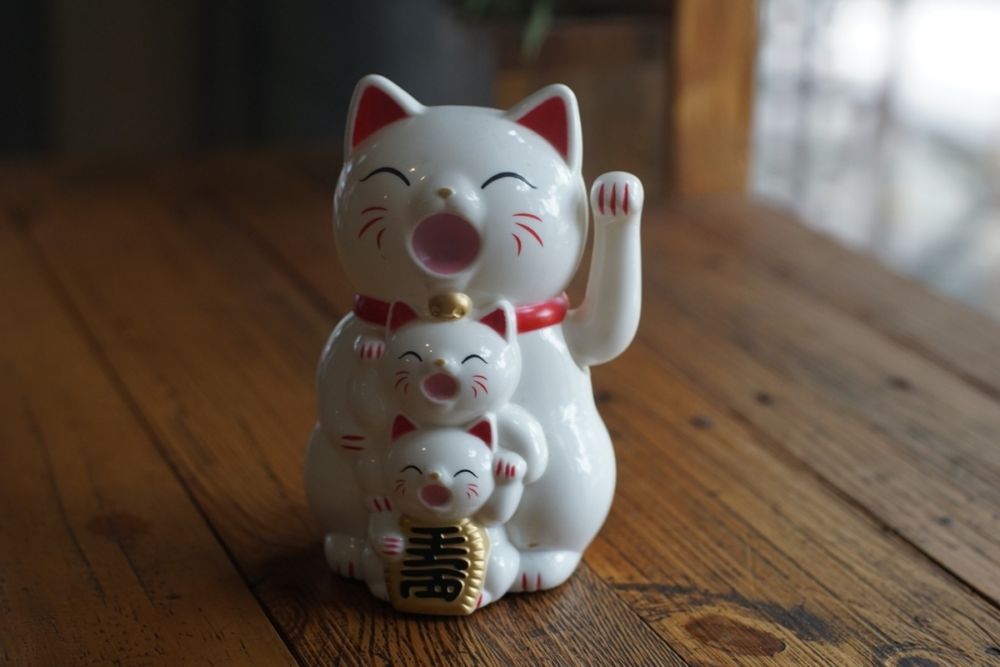 But why are the Japanese so fascinated with cats? Manami Okazaki’s latest book, Land of the Rising Cat, further explores some of the reasons behind Japan’s long interest in these furry friends, and suggests that “cats are compassionate towards us, and sensitive… This kind of relationship might suit contemporary times.” This theory holds some merit since Japan’s declining birth rate seems to have resulted in some people coming to consider cats as a kind of surrogate offspring.

Additionally, with an influx of people moving to cities, felines are often seen as being better companions, as they are independent and require smaller living spaces when compared to dogs. And most importantly, cats are pretty much the definition of “kawaii,” used by the Japanese to describe something cute—or rather something being “childlike,” including lazy behaviour, which is a pretty accurate description of how most cats act. 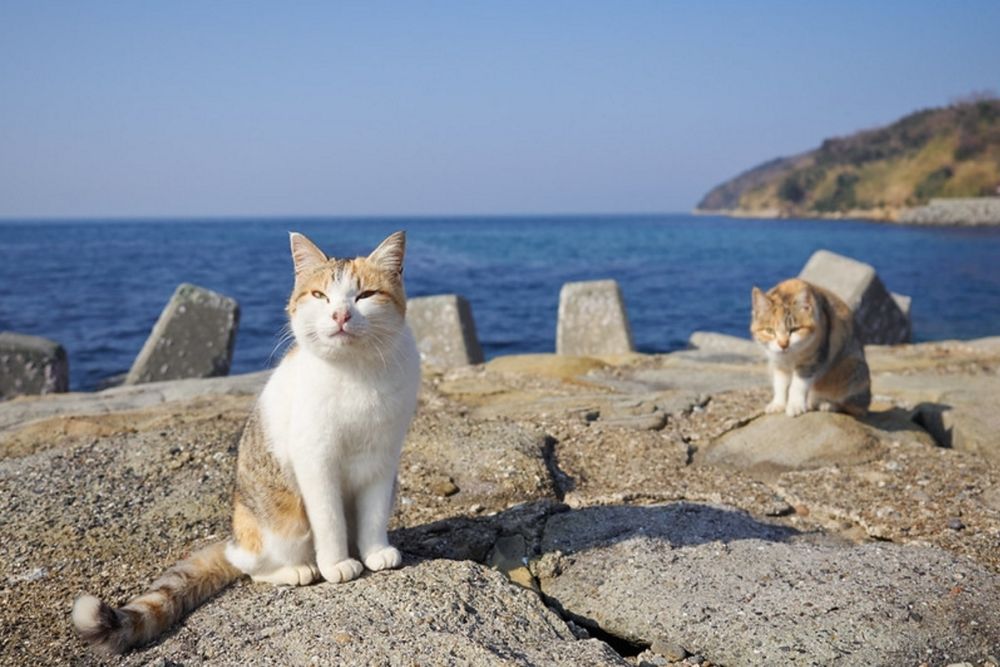 One of the most famous “Cat Islands” of Japan, Aoshima (青島) is located in Ehime Prefecture (愛媛県) and is roughly 1.6 kilometres long. In order to reach the island, one must ride the ferry from Port Nagahama (長浜港), which is located in front of the JR Iyo-Nagahama Station (伊予長浜駅). The journey takes around 30 minutes depending on the weather, with boats running from Nagahama Port at 8 am and 2.30 pm, with return trips at 8.45 am and 4.15 pm. A round-trip cost around ¥1,360 and the ferries have a carrying limit of only 34 passengers. Thus, it is highly recommended you try to visit Aoshima via the morning cruise.

Living up to its moniker, Aoshima truly is a cat lover’s paradise. As of recently, it is home to more than 120 semi-feral cats, with the feline-to-human ratio skyrocketing to about 36:1 in recent years. Whilst the island used to be home to around 900 people in the 1940s, since 2018, the population has reportedly decreased to 13, with an average age of over 75. Most of the human activity on the island generally tends to be a result of visitors from the mainland. With the abundance of kitties, there’s definitely enough to go around. 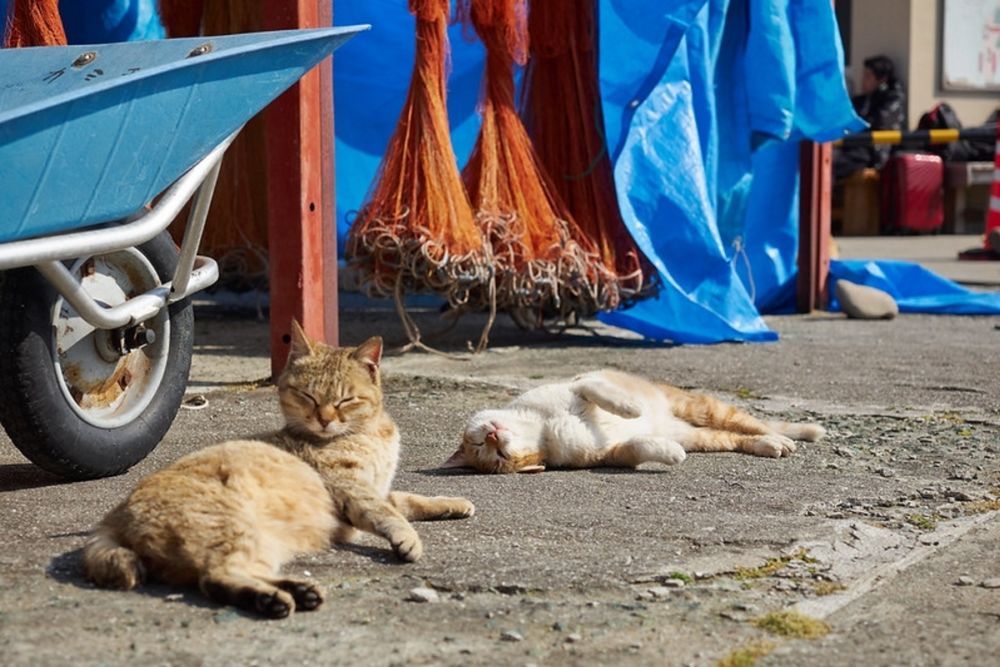 Aoshima was not originally like this—it used to be uninhabited, but was eventually discovered to be a good fishing area. As a result, the human population shot up and turned the place into a thriving fishing village. In order to combat the problem of rodents on boats, cats were introduced—but ended up remaining on the island indefinitely and reproducing, thus increasing their numbers exponentially. Nowadays, these cats survive off of rice balls, energy bars, and other snacks that they can scrounge off of tourists.

One important thing to note is that, despite its fame, Aoshima is not a designated tourist spot—there are no cars, hotels, restaurants, or even vending machines on the island. Additionally, there is nowhere to throw rubbish when you set foot on the place, so visitors must clean up and take any garbage back with them to prevent littering. Fortunately, there is a designated feeding area near the island’s community centre if you want to get up close and cuddly with the cats. Other than that, please refrain from making too many loud noises, so as to not disturb any of the furry residents during your stay. 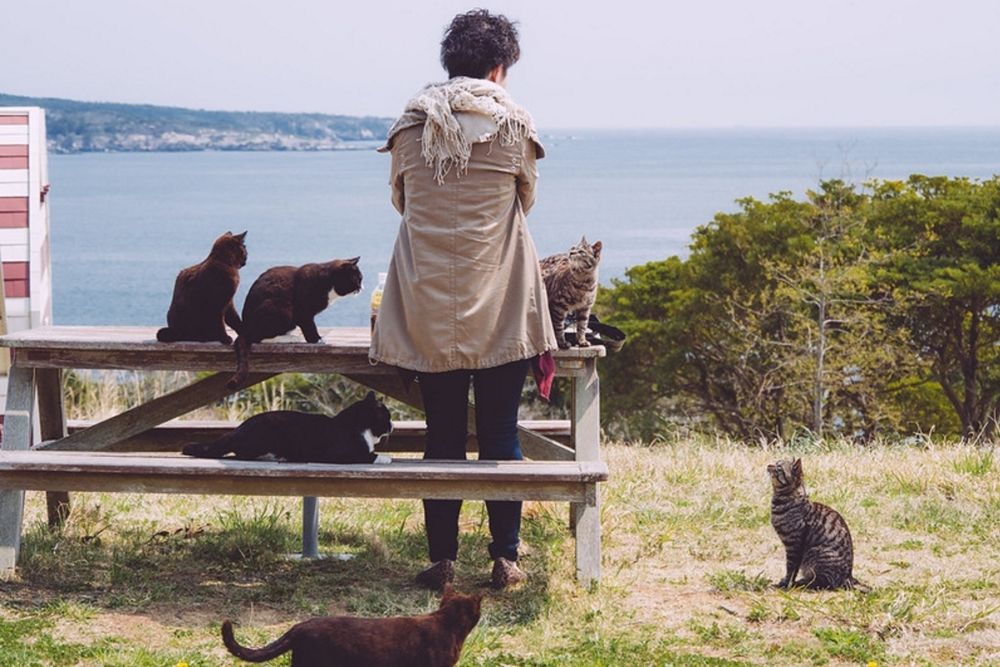 Another place to check out is Aoshima’s sister island, Tashirojima (田代島), which is located off the coast in Sendai (仙台市), in Ishinomaki (石巻市), Miyagi Prefecture (宮城県). The island is home to over 130 cats and has less than 100 human residents living in the area. The best way to get there is to first travel to Sendai, then change to the local JR train to Ishinomaki Station (石巻駅). Afterwards, you can either take a bus or taxi to the port or walk 30 minutes to get to the ferry terminal. The boat ride takes about 40 to 50 minutes—again, depending on the weather, and there are around three departures a day. A round-trip usually costs about ¥2,460.

The cats on the island are held in high regard, so much so that dogs are strictly banned. This is due to the cats’ historical importance—Tashirojima once used to be a centre for silkworm production in the late Edo period, so the residents brought cats to the island to not only help control the mouse population but to also protect their silkworm farms. Additionally, many current islanders are also fishermen, and it is said predictions on the weather can be made depending on the cats’ behaviour.

As a result, the present felines who are said to be descendants of the original cats are mainly thought of as lucky and auspicious. There’s even a neko-jinja (猫神社; “cat shrine”) in the middle of the island specifically dedicated to the feline residents. As the story goes, due to a bout of carelessness, a rock fell and killed one of the cats. Thus, the shrine was built as a sign of dedication. To this day, fishermen still continue to make offerings at the shrine every year on 15 May. 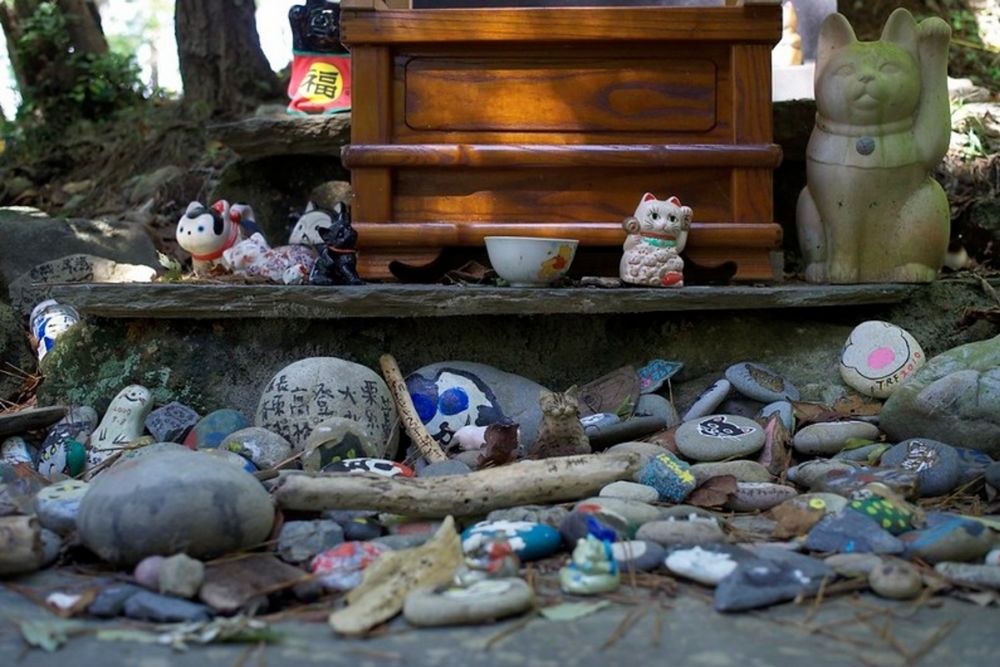 If you want to play with the cats right away, be sure to head towards Nitodako Pier on the southeastern side of the island. Compared to the rest of the area, this place has an exceptionally high number of felines. You’ll be able to see cats do everything from lounging on the ground to being fed fish by the fishermen. Most of them enjoy the attention given by tourists, so be sure to get your camera ready to take any cute photos! Some cats can also be found gathering on the steps of the island’s only shop, Kamabutsu Shoten, which is located in the northwestern part of Nitoda village. However, with such few facilities, it is still highly recommended that all tourists should bring their own food and take their trash home. 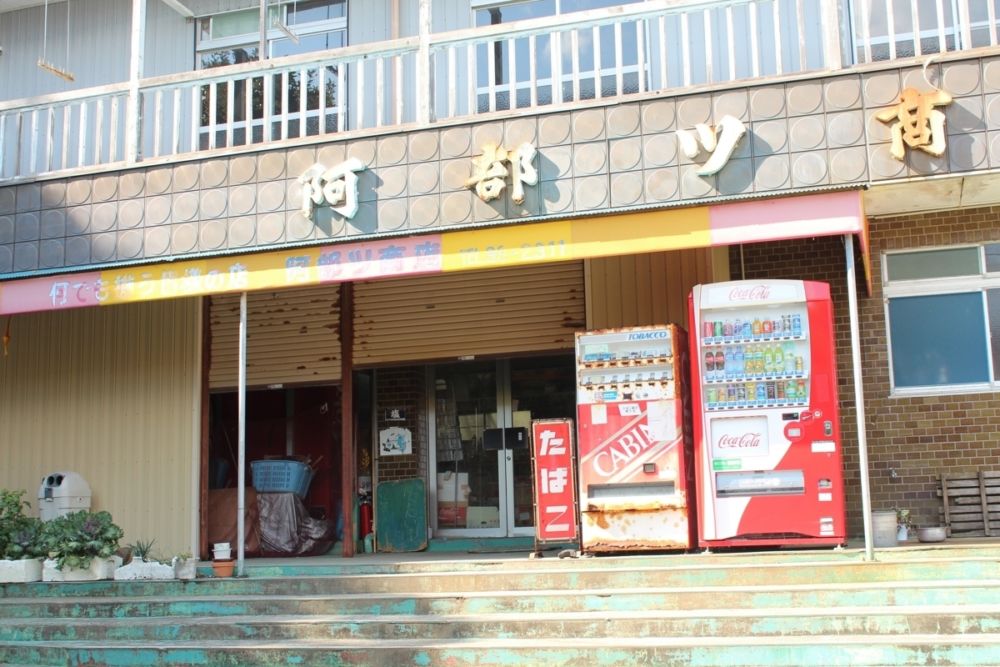 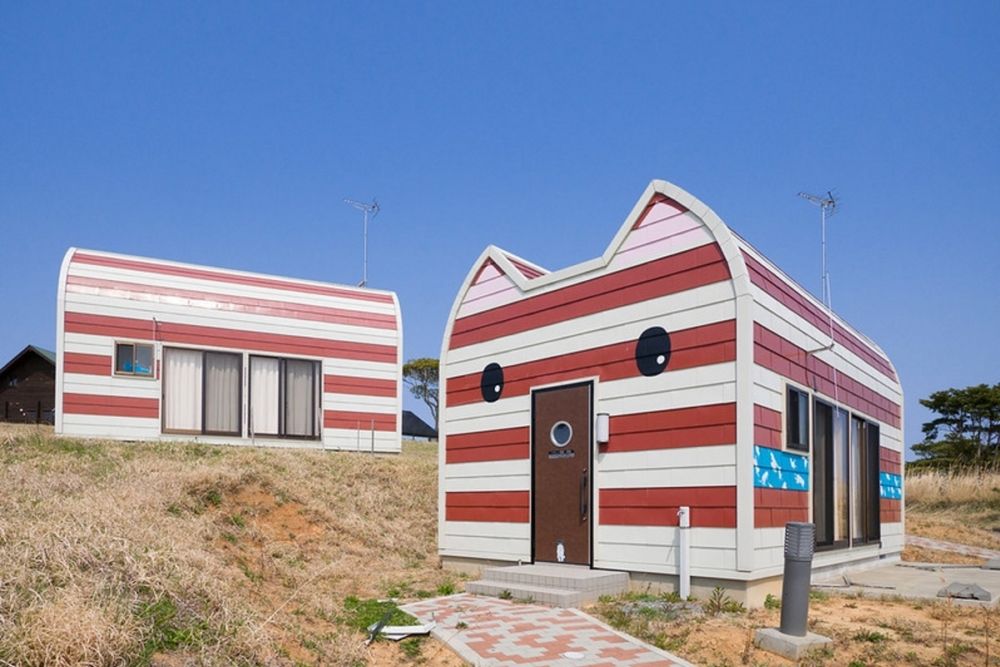 Unlike Aoshima though, it is possible for visitors to have an overnight stay on Tashirojima. The southern tip of the island has a camping lodge called “Manga Island,” named after the way its accommodations are designed in a cat-like shape by manga artists Chiba Testuya and Satonaka Machiko. Additionally, the resort also includes cat-themed artwork drawn by the duo. There are five lodges available, with each accommodation coming equipped with bedding, showers, kitchen utensils, and cooking equipment. Visitors can choose between the red-and-white-striped “Shima Lodge” to the two-storey “Shiro Lodge.” As the accommodation is open from July to October, it’s a great place to spend the summer months. Pro tip: Reservations have to be made online here (which is in Japanese), and it is best to book at least two weeks in advance. 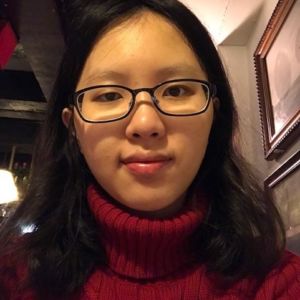 Raised in Hong Kong and educated abroad, Tiffany is a recent Media & Communications graduate from Cardiff University. She has previously written for HiveLife, Earth.Org, and Medium. In her free time when she’s not trying to meet deadlines, you can often find her reading, creating digital illustrations, or geeking out about her favourite characters online.