Kyoto by the Sea, Japan: Passageway to the heart of Japan

Located on the Sea of Japan, Kyoto by the Sea boasts two of the world’s most beautiful bays and one of Japan’s three most famous scenic views. Good reasons to farewell the busy city of Kyoto for some of Japan’s lesser-known gems. 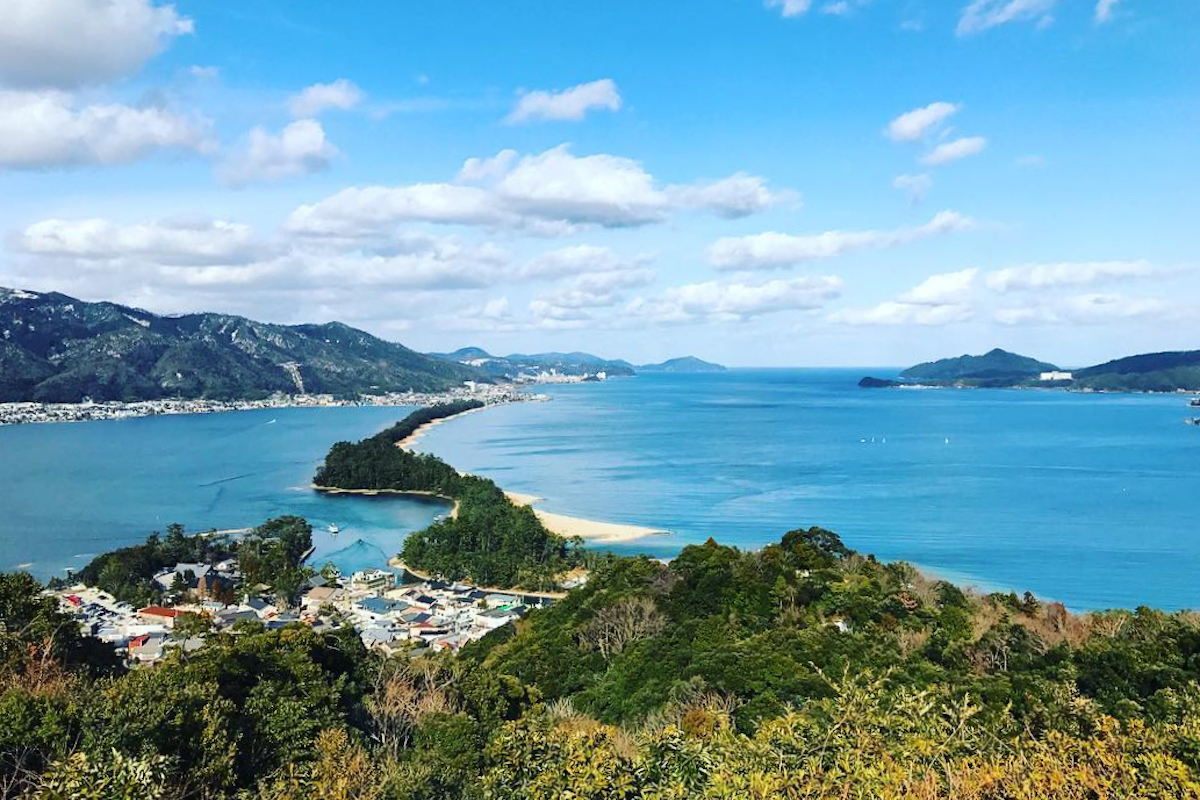 Kyoto is a city of beauty, history, and culture, and is a popular destination with travellers flocking to the one-time capital of Japan. But the downside of the city’s attractiveness is over-tourism. Visitors interested in exploring lesser-known destinations without the overwhelm of crowds should consider Kyoto by the Sea. Only 90 minutes by car or two hours by train from Kyoto City and Osaka, there are many reasons to visit Kyoto Prefecture’s northernmost region.

Seven towns comprise Kyoto by the Sea. The municipalities of Miyazu, Ine, Kyotango, Maizuru, Ayabe, Yosano, and Fukuchiyama crisscross the panoramic coast of the Tango Peninsula. The region’s mixture of ocean and mountains not only provide an abundant food source, but it also delivers some of the most breathtaking scenic views in Japan.

Kyotango is in the northern part of Kyoto Prefecture. Nearby is Ine, a town famous for its funaya: traditional boathouses. About 30 minutes away is Amanohashidate with its spectacular scenery. And a further two hours to the west is Kinosaki Onsen, a sleepy town and arguably one of the best hot spring villages in Japan. 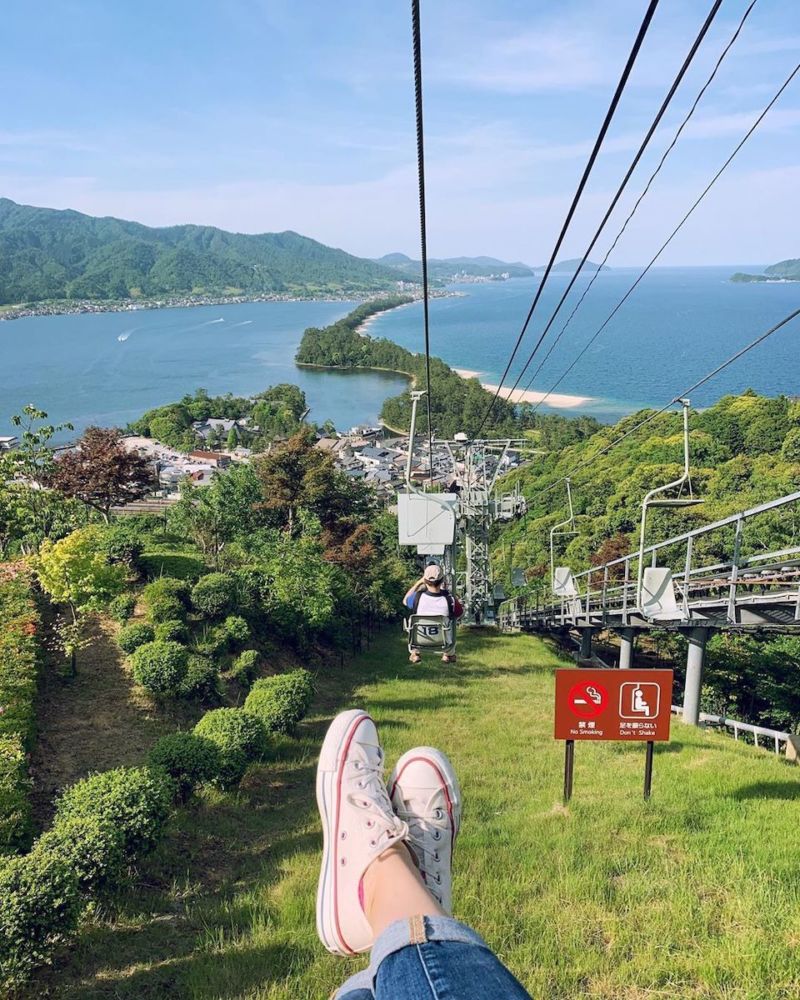 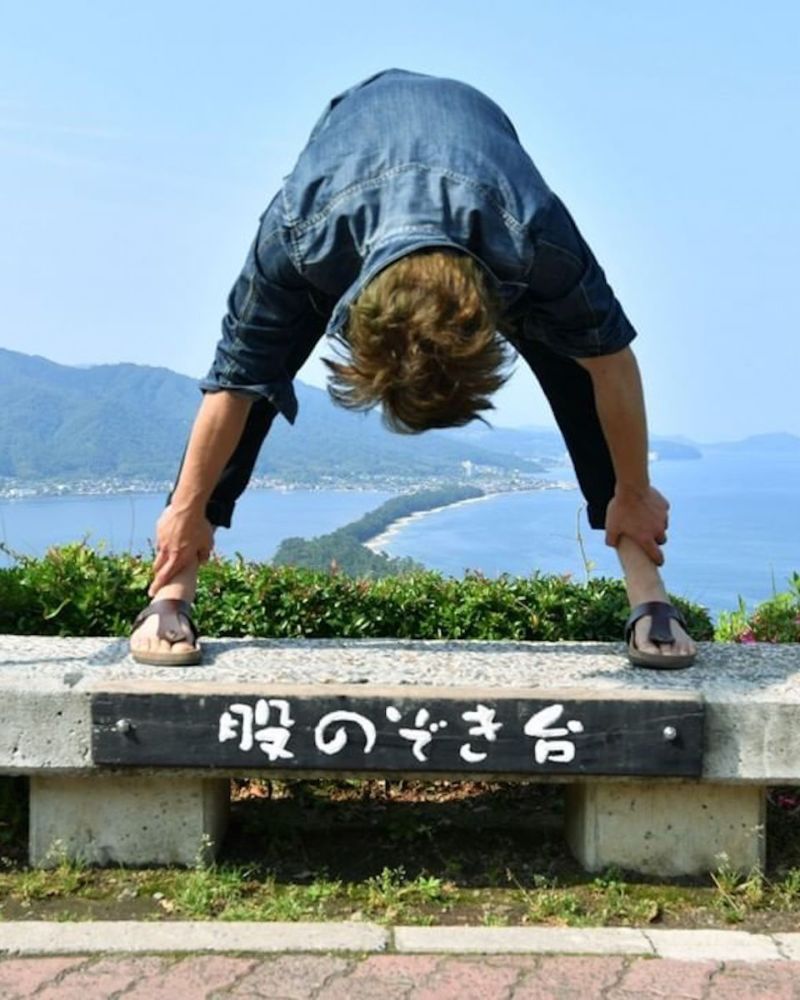 Tourists are lured to Miyazu by the unique sandbar called Amanohashidate. The three-and-a-half-kilometre-long narrow sandbar in Miyazu Bay is covered by 8,000 pine trees. You can cycle a bike or walk across the white sand and green pine bridge or catch a ferry for a seaside view. On a clear day, the best view is from the mountain top observatory in Kasamatsu Park on the opposite side of the bay. It is accessible by cable car or chairlift.

From the observatory, try this unusual viewing position called matanozoki where you turn your back, bend over, and look through your legs towards Amanohashidate. Whoever started this crazy idea believed it may help you see the sandbar from a mythological perspective, resembling a dragon taking flight towards the heavens. Dragon or no dragon, the Miyazu folk proudly claim this to be one of Japan’s “three most famous scenic views” alongside Miyajima in Hiroshima and Matsushima in Sendai.

Pop into one of the shops at the base of the chairlifts selling staple souvenirs of the region including locally roasted chestnuts, oiled sardines, chikuwa fishcakes, and roasted fish. 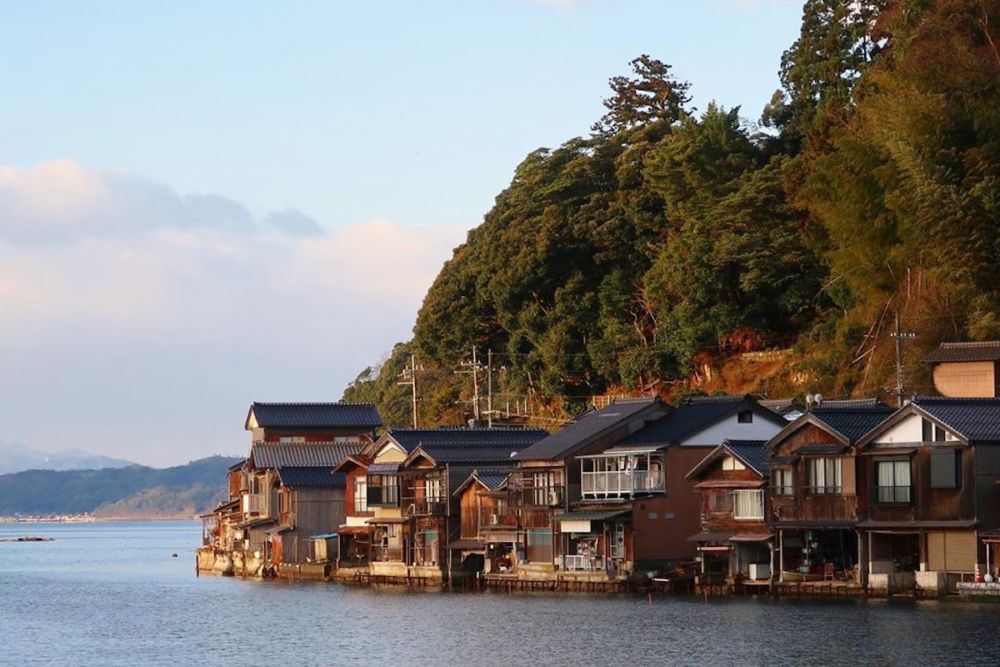 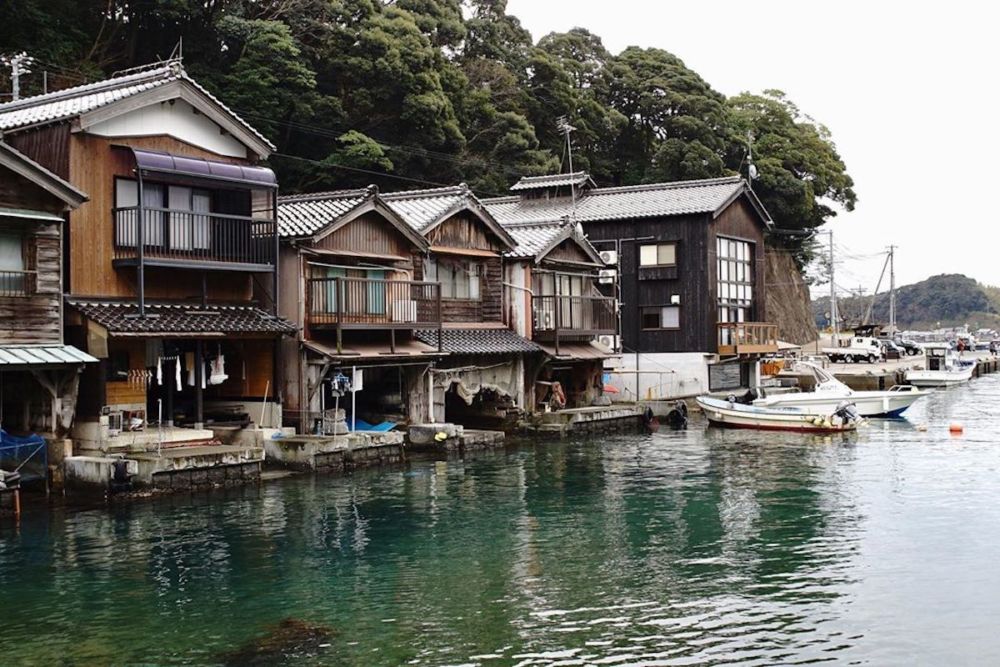 About 15 kilometres north of Amanohashidate lies the picturesque seaside village of Ine. A band of 230 traditional boathouse residences (funaya) stretch out at sea level along the circular shore of Ine Bay. They perch on the water’s edge as if they’re floating. Historically, these buildings were mostly single-storey with a straw-thatched roof. Today’s boathouses rise two stories above the water. The first floor is used for boat mooring, storage of fishing gear, and a workspace for fishermen. The second floor is the actual home containing the living areas.

A few funaya operate as guesthouses. Some offer immersive activities, such as ocean excursions with fishing, where you cooking the catch afterwards. To stay in a funaya is a memorable experience. Furthermore, a 25-minute boat tour around the inlet provides an exceptional view of the boathouses. Purchase a bag of snacks on board to feed the seagulls and kites, but watch out as they swoop down and steal from your hands. Refer to the Ine Tourist Association Website for funaya bookings.

To sate your hunger, look towards the water’s edge for a kappo, a seafood and sushi restaurant. Wadatsumi serves only seafood caught fresh on the day, and diners sit at a counter watching the chef masterfully clean, slice, cook, and plated the meal. 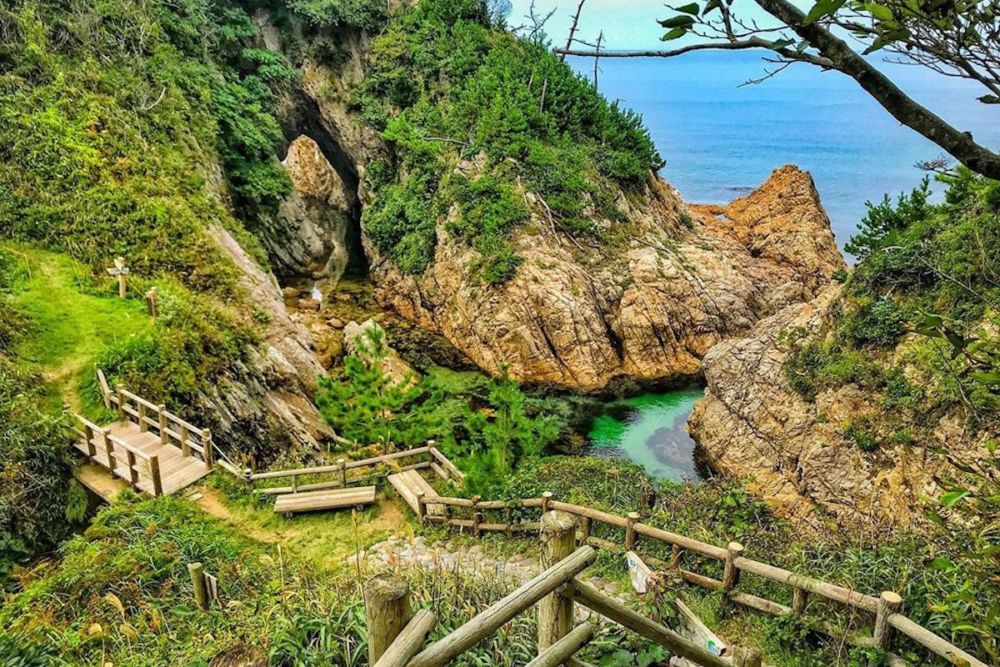 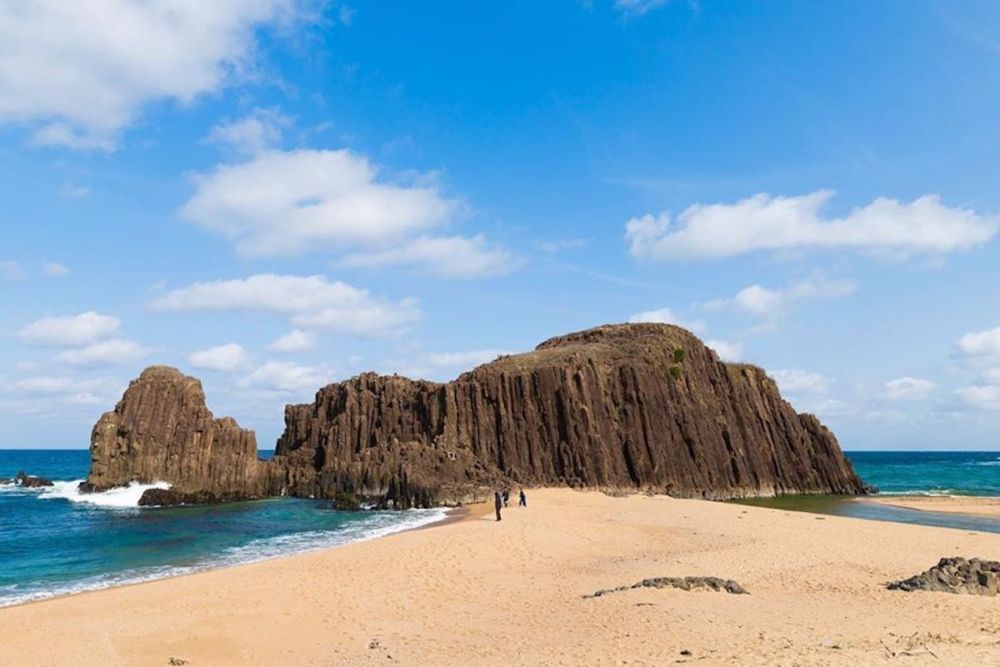 Kyotango in the north is a haven for nature lovers. Harbouring 15 stunning beaches, this rich diverse landscape on the Tango Peninsula also counts the San’in Kaigan Geopark among its natural beauties. Declared a UNESCO Global Geopark in 2010, inside the park’s 2,458 square kilometres is Tateiwa Rock. The bright red volcanic monolith juts 20 meters above the contrasting blue ocean near Nochigahama Beach.

Tango Matsushima is another scenic location, named because the view of the rugged coastline is said to resemble Matsushima, one of three designated Special Places of Beauty. At sunrise or sunset, the silhouette of the rocky outcrops from Kyougamisaki Cape makes for a memorable moment. Also photogenic is the white Kyogamisaki Lighthouse on the northernmost point of the Tango Peninsula is. Perched on a steep cliff 146 meters above the Sea of Japan, the historic lighthouse is accessible via a 20-minute walk from the car park at Kyogamisaki Cape.

When it comes to dining, people travel from all over Japan during winter to try Kyotango's taizagani snow crab. The crab season is from November to March. 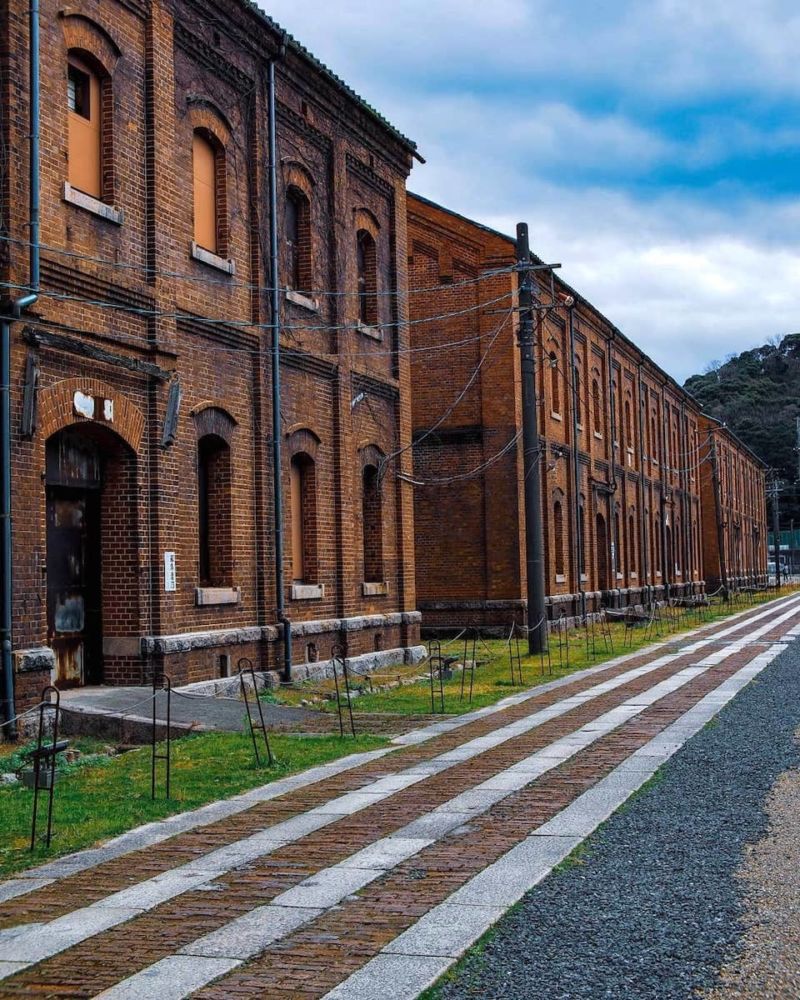 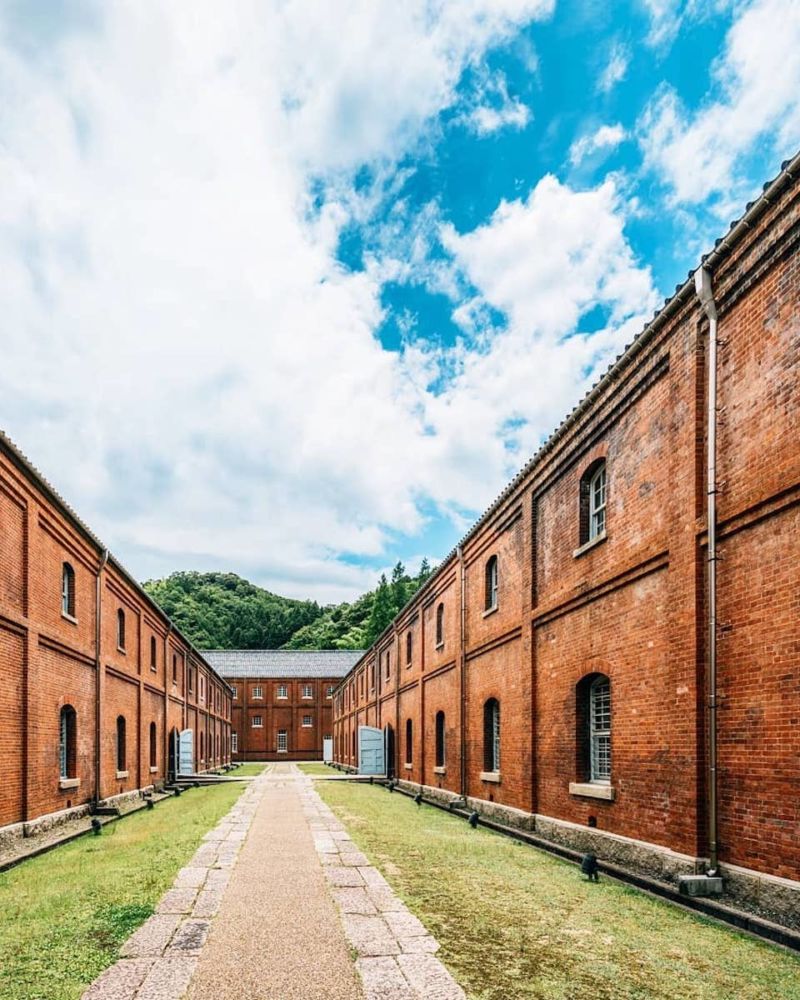 The port city of Maizuru has been a Japanese naval base since 1901. Maizuru was the home port for legendary Japanese naval commander General Heihachiro Togo, who in 1905 became famous for destroying nearly two-thirds of the Russian fleet in a battle that ended the Russo-Japanese War. Togo’s legacy is said to live on through the creation of nikujaga (a beef and potato stew), which has become the city’s official dish.

Maizuru was the port used to return Japanese prisoner-of-war soldiers repatriated to the Soviet Union during World War Two. The Maizuru Repatriation Memorial Museum is filled with associated historical memorabilia and in 2015, 570 items were recognised in UNESCO’s Memory of the World Register. You can also wander around a collection of heritage brick warehouses at Maizuru Brick Park. Interestingly, these red-brick buildings were designed by the former Japanese navy and they follow a European style rarely seen in Japan. 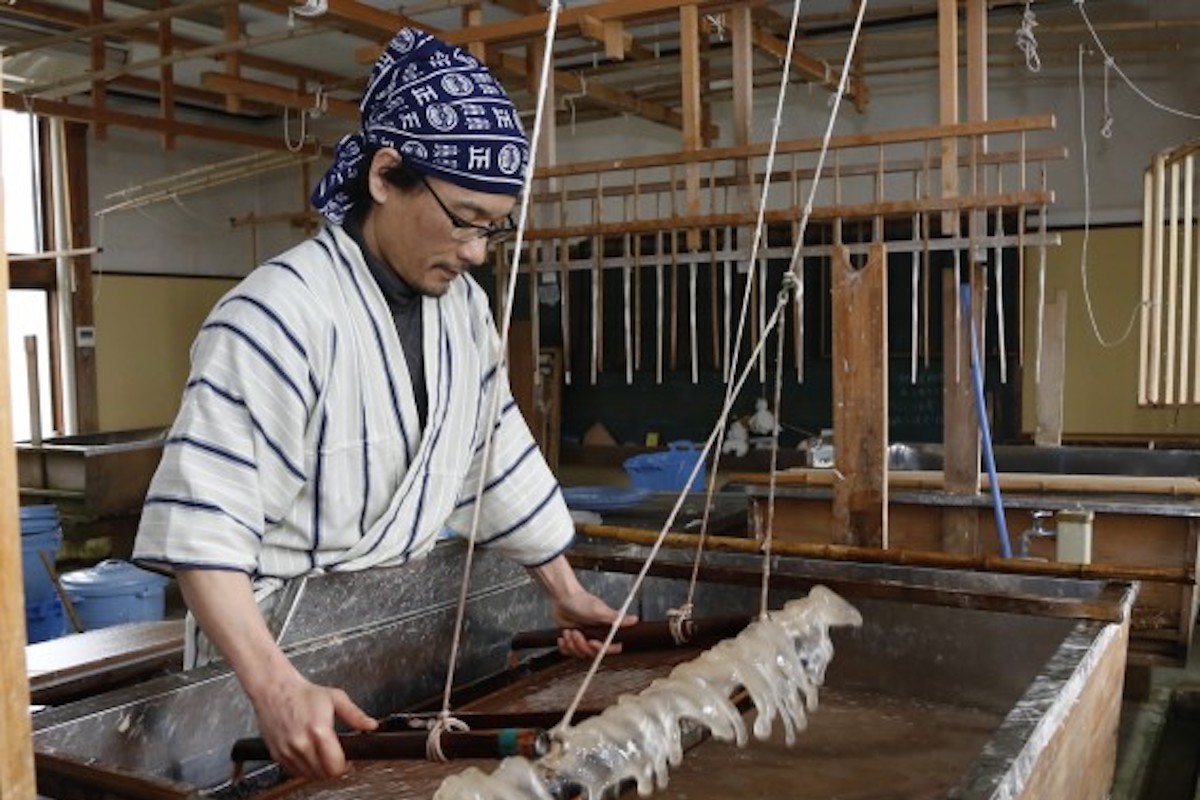 The small village of Kurotani in Ayabe is one of the world’s leading producers of handmade washi paper. Local legend suggests that the village was founded at the end of the twelfth century after members of the defeated Heike clan fled to hide in the mountains. The banished samurai warriors then took up the art of washi papermaking during winter.

Originating in China, washi papermaking was first introduced to Japan by Buddhist monks. Centuries later, the Kurotani papermaking process has been refined, strengthening the paper by adding fibres from locally grown gampi trees or mulberry bush (gozo). Washi paper is exceptionally durable and is said to last one thousand years.

Nowadays, it is used to make stationery, paper lanterns, Japanese umbrellas, tatami paper, and they double as fabric for wallets, purses, and even garments. Washi papermaking remains an artisan skill and is incredibly labour-intensive; the process involves up to 16 steps, including harvesting, steaming, peeling, pounding, rinsing in ice-cold river water, drying, and post-processing. You can purchase products made from washi paper at the Kaikan gift shop in Kurotani and observe the traditional handmade practise at a washi-making workshop. 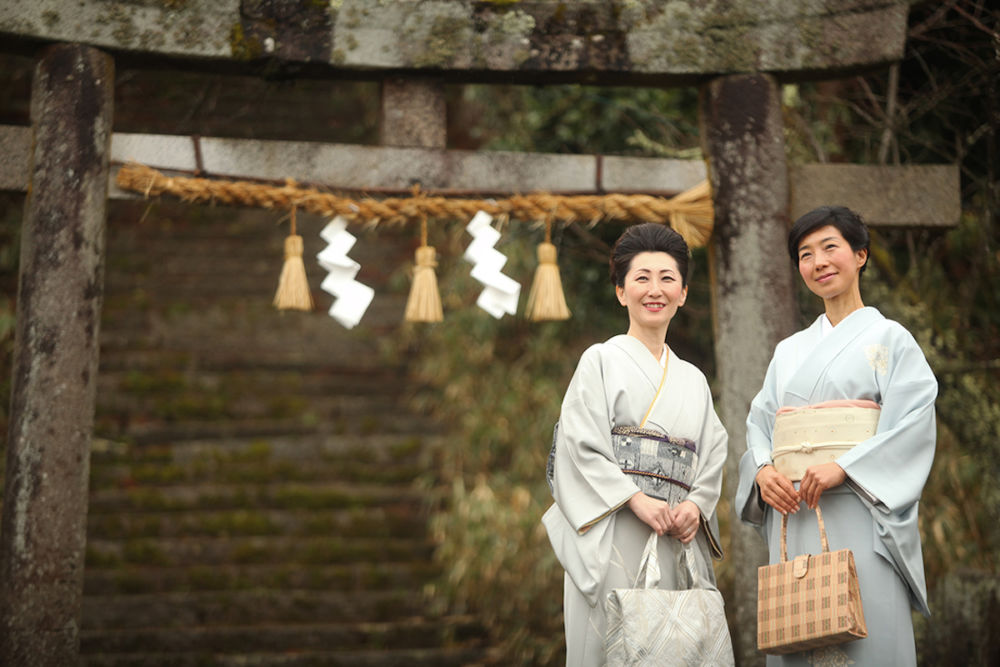 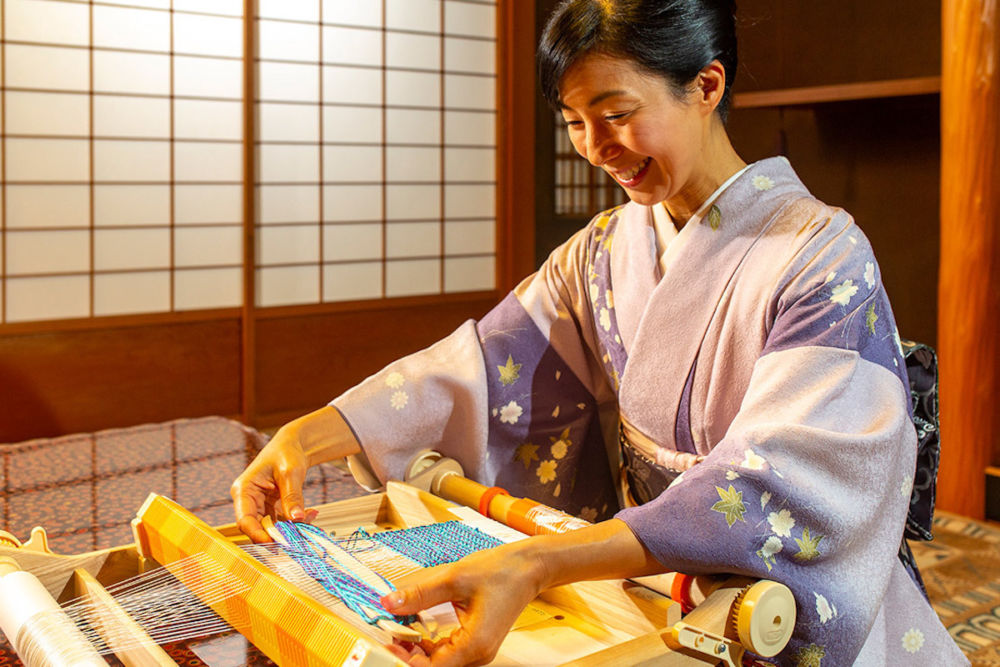 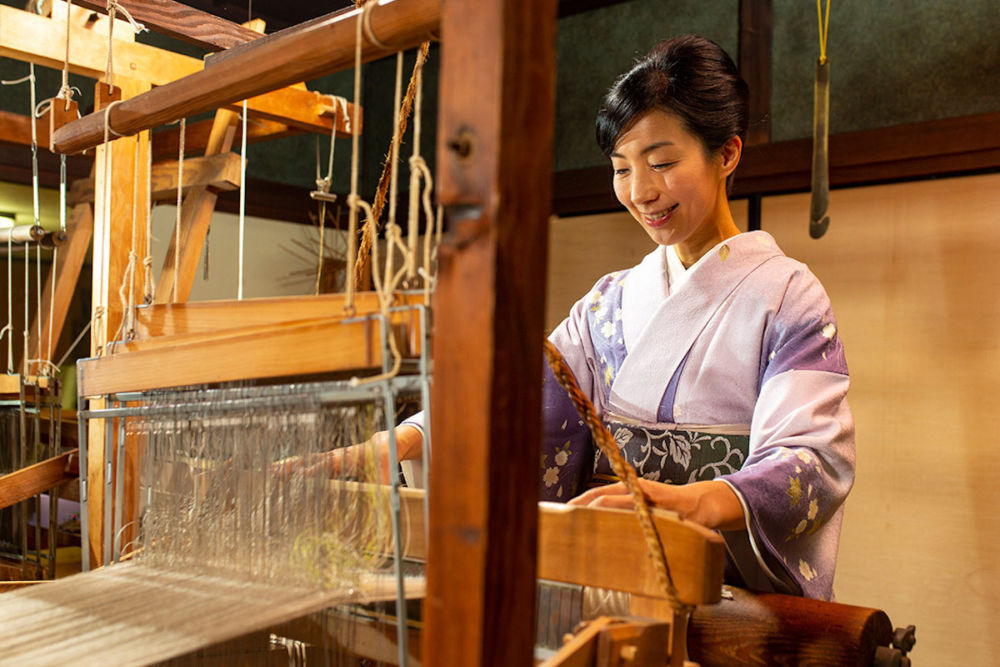 The rainy and humid climate of the Tango region’s northern coast provides perfect conditions for silk production. The town of Yosano is one of Japan’s main manufacturers of Tango chirimen, also known as silk-crepe. Characterised by its soft-to-the-touch texture and extremely high quality, chirimen silk is a luxurious Japanese textile used in high-end kimonos and other fashionable goods.

During the Showa period (1926 to 1989), Yosano was the epicentre for silk production. Today there are fewer manufacturers, but you can still observe looms in operation inside historical buildings on Yosano’s Silk-Crepe Road. For a glimpse into this bygone era, take a tour through the grand Bitou Family Residence.

Reach Chirimen Street by taking the Miyazu line on the Kyoto Tango Railway to Nodagawa Station. It is then a 20-minute bus ride from the station to Kaya Shogakko-mae bus stop, followed by a one-minute walk. 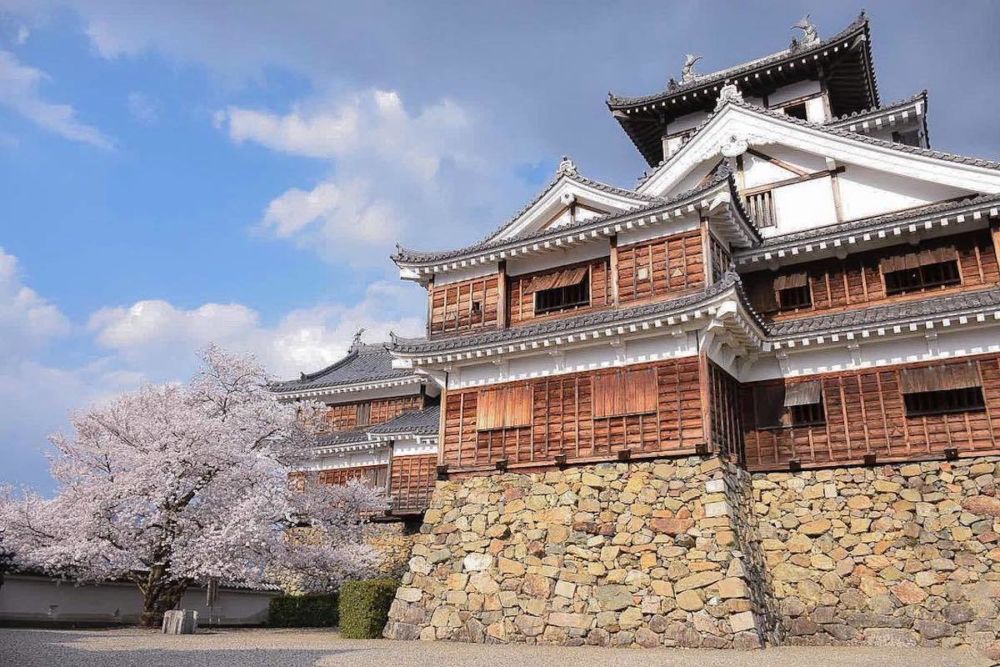 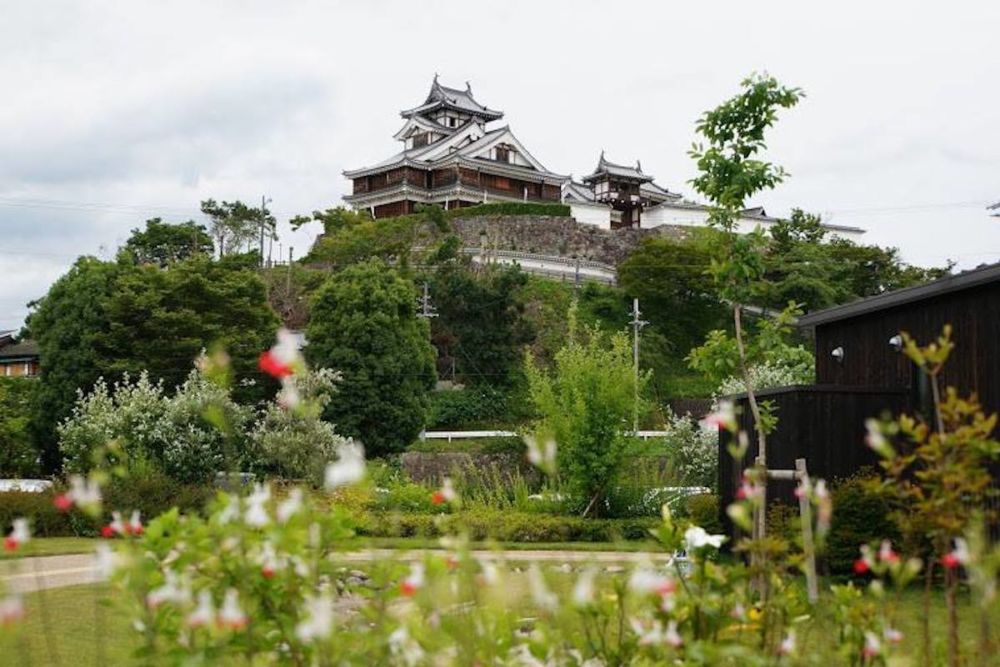 This peaceful old castle town located in the Tamba area is renowned for wine and silk production, but its most famous attraction is the Fukuchiyama Castle, especially during the spring—cherry blossom season. Originally used as a fortress for the Yokoyama local ruling family, a Japanese samurai general named Akechi Mitsuhide took over control of the fortress in 1576. He re-named it Fukuchiyama Castle and added a four-storied castle tower and palace. Unfortunately, in 1872 during the Meiji Period, the castle was dismantled. In 1986, after three years of meticulous reconstruction, the castle re-opened.

Inside the castle near the keep is the City Folk Museum featuring articles left behind by historical castle lords. At the base of the castle is the Sato Taisei Memorial Art Museum, showcasing the works of Japanese painter Taisei Sato. The Tanba Daily Life Clothing Museum chronicles the history of Fukuchiyama and the Tanba district.

Take a stroll through Yurano Garden, a large green space in front of the castle, lined with shops and cafés. Visit Goryo Shrine where the spirit of general Akechi Mitsuhide is enshrined.

Need a bite to eat? Located on the south side of Otemon Gate is the main store of Adachi Otoeman, selling high-end baked goods incorporating selected local ingredients, like chestnuts and wasanbon sugar in their Japanese Chestnut Cake and Onemon’s Pound Cake. Note that the castle and museums are all closed on Tuesdays.

Express and local trains operate to Fukichiyama Station from Kyoto Station on the San’in Main line via Nijo Station. Journey time is around 75 to 80 minutes to Fukuchiyama from Kyoto. There are also connections to Osaka on the Fukuchiyama Line via Amagasaki, Takarazuka, and Sanda. There are connecting trains from Fukuchiyama to Aminohashidate on the Japan Sea coast. By car, drive west from Kyoto via Kameoka on Route 9. 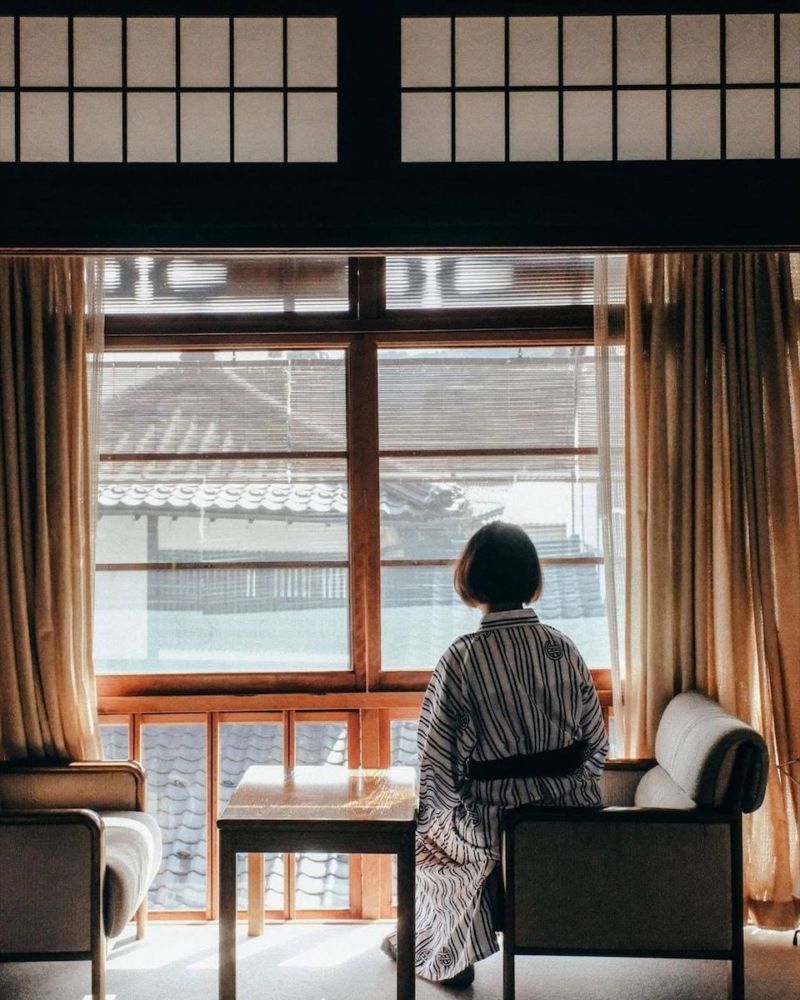 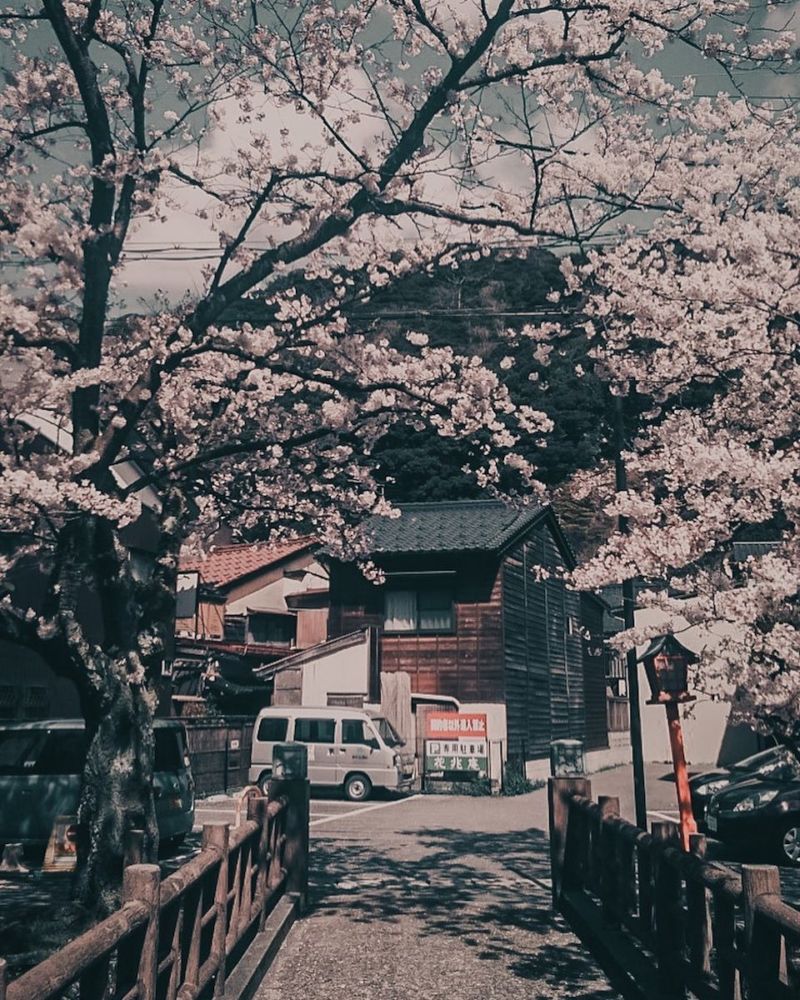 Located northwest of Kyoto in the northern Hyogo Prefecture is a 1300-year-old onsen town famous for its seven public hot springs. The atmospheric town has a willow-lined canal running through its centre. Intriguing side streets branch off from the main thoroughfare. By not allowing the building of any modern architecture or large garish hotels, Kinosaki Onsen remains a beautiful remnant of old Japan. It’s a place where you don your yukata (cotton kimono) and wooden geta (sandals) and slowly clip-clop your way to your onsen experience. The town is compact and it takes around 20 minutes to casually meander from one end to the other. The only challenge choosing which onsen to visit next.

Travel by train on the JR San‘in Main line from Kyoto Station for two and a half hours. Take advantage of the convenient service offered by the tourist information office, where you can leave your luggage and they will forward it to your inn. 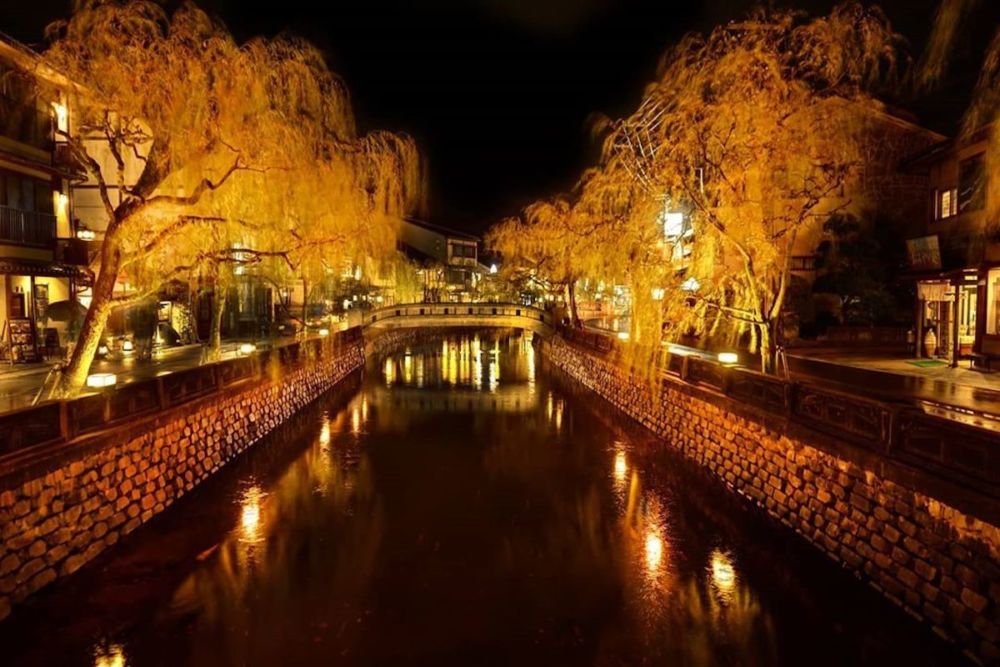 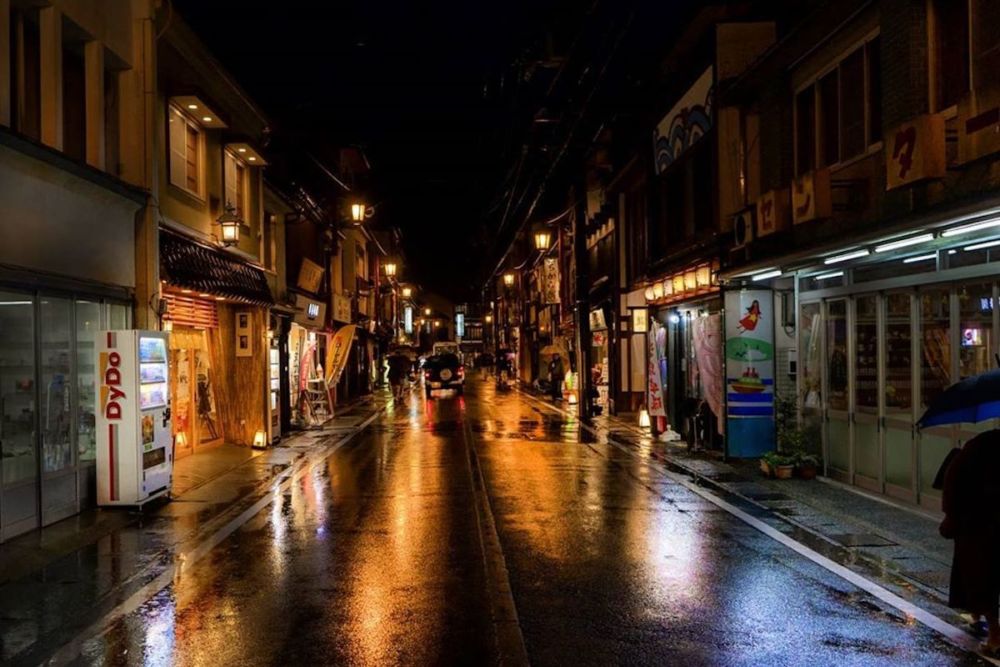 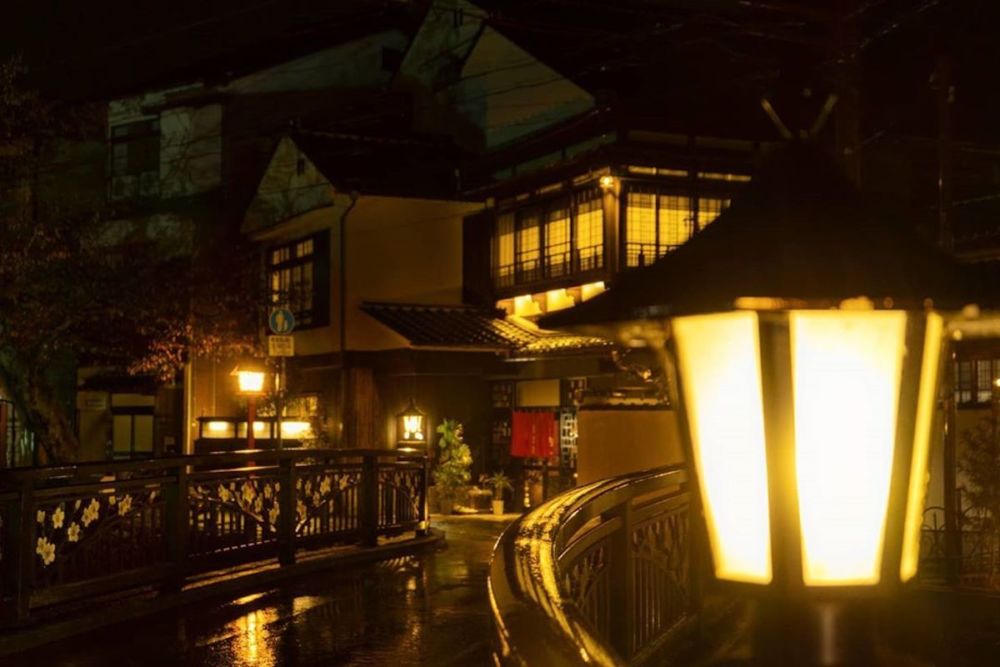 Jennifer Johnston is an Australian freelance travel writer and blogger with a strong interest in people, history, culture, the environment, and responsible tourism. She blogs at Travel Bug Within.