It’s peculiar to think that until 25 years ago, Siem Reap was a quiet town still recovering from the ravages of the war-torn 1970s and 1980s. There was little to indicate that it would become a world-famous tourist destination, save for a handful of wooden guesthouses. Back then, largely undeveloped land defined the landscape, while the dusty dirt roads were unpaved and pot-holed; a trip to Phnom Penh lasted as long as 14 hours (it now takes around four).

The area directly south of the Siem Reap River, now the bustling Wat Bo Village, was known as “the suburbs,” and marked by fields and the occasional temple. The manager of Angkor Village, now one of the longest-established hotels in town, purchased the land for his development with a Rolex watch and a gold chain. 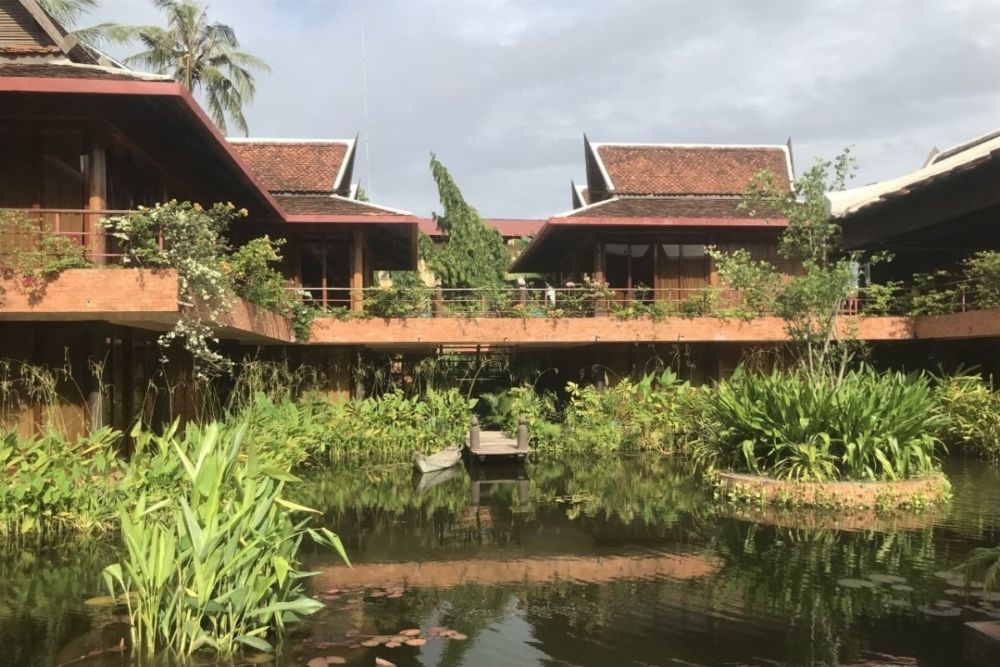 Since the gold rush of the early 2000s, when the boom in budget travel began and tourist numbers swelled, Siem Reap’s proximity to the Angkor temples and expanded workforce has made it the second-most populous city in Cambodia. Far from acting as a mere gateway town, it has become a densely concentrated city in its own right, growing exponentially in the 2010s with ever more restaurants, boutiques, salons, resort-hotels, markets, and NGOs.

The pandemic of 2020 exposed Siem Reap’s over-reliance on international tourism, forcing many businesses to close—particularly around the chock-a-block drinking zone, Pub Street—and large numbers of residents to leave for the countryside. By year’s end, major roadworks were reshaping the cityscape once again as Siem Reap reconciled with the changing times and prepared for a new era. 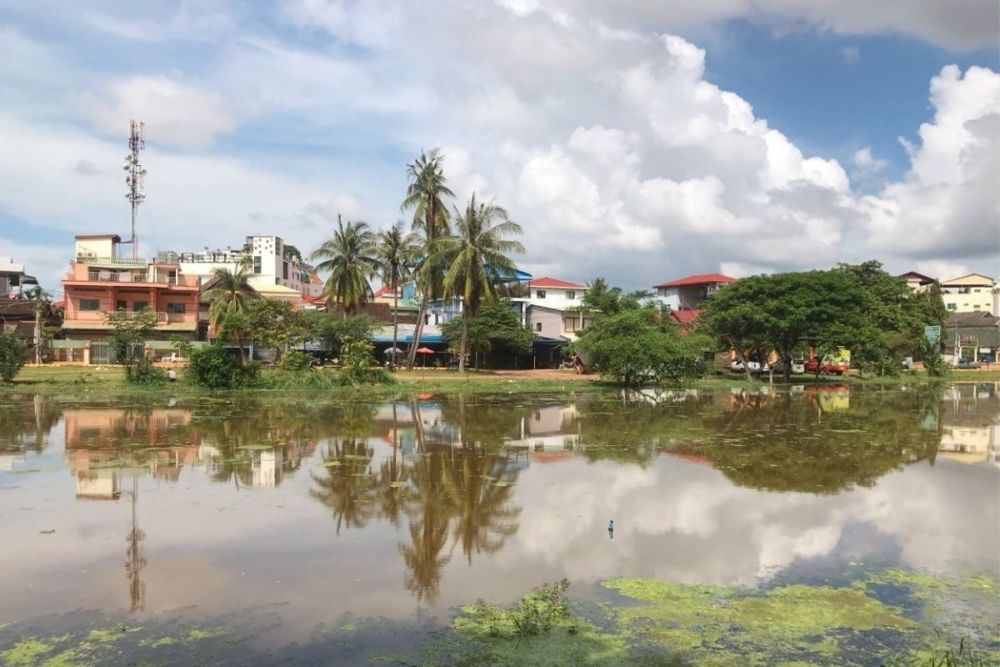 One of the first tenants, Frangipani Spa, still remains after nearly 20 years, having set a trend for star salons dotted all across town; the colourful Louise Loubatieres is among the finest of many clothing boutiques, also stocking ceramics and art objects; and The Little Red Fox Espresso set a new benchmark for cafés in the city with its hip mélange of fine coffee, health-conscious menu, and frequent cultural events. Further graced with restaurants, jewellers, and leather artists, you could happily spend all afternoon and evening perusing the refined wares of this tranquil area. 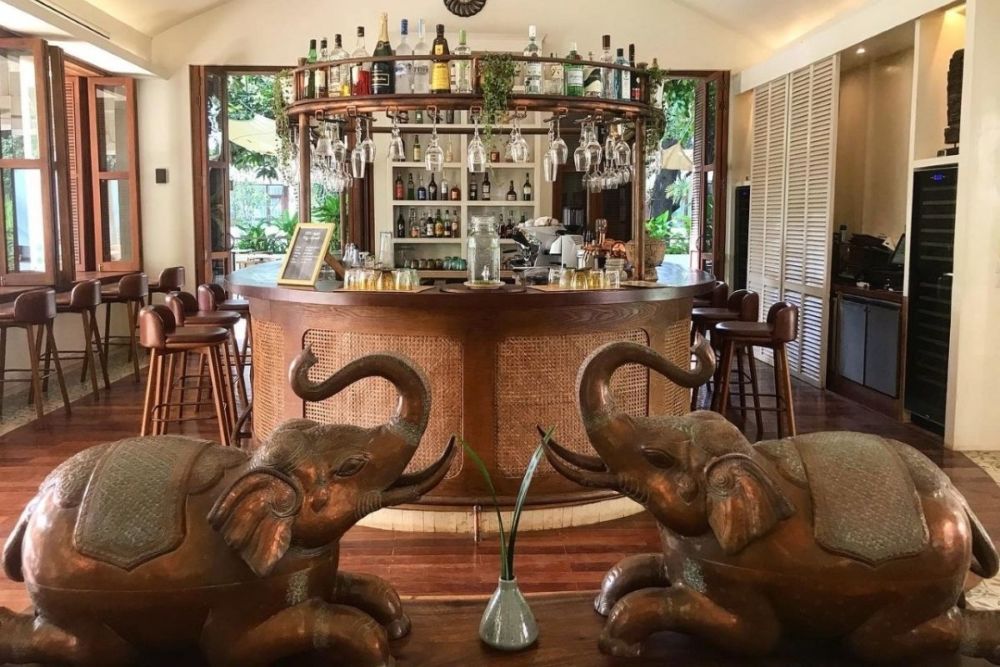 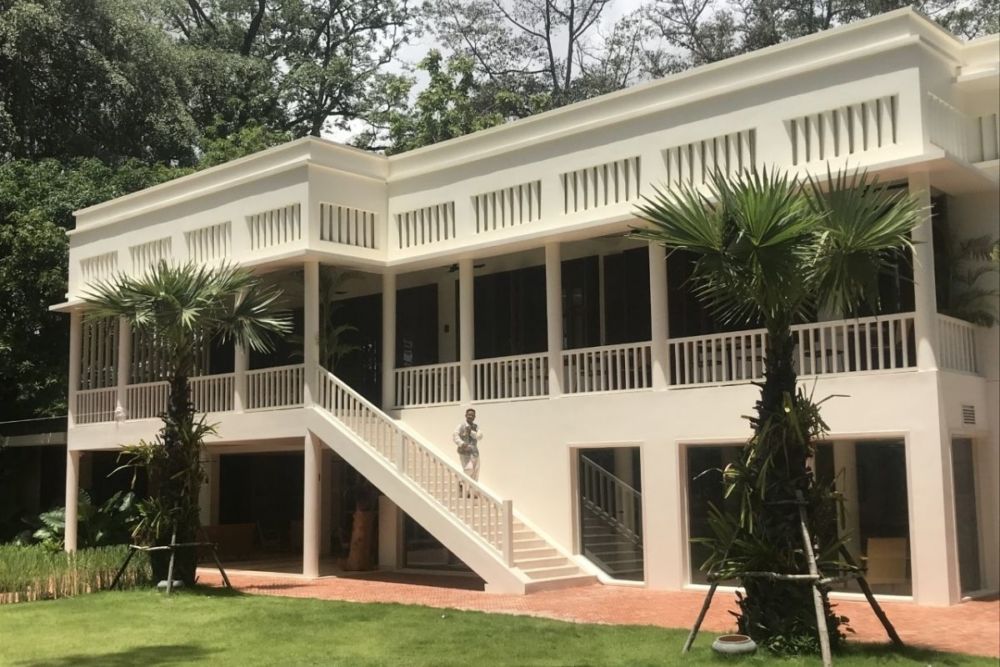 An area defined by significant exemplars of colonial architecture—the stunning riverside hotel FCC Angkor by Avani on Pokambor Avenue was formerly the French governor’s house, while Raffles Grand Hotel d’Angkor was built in 1932—the French Quarter also encompasses outstanding Khmer buildings such as the Royal Residence.

Adjoining this regal cluster is a large recreational area in a city not otherwise overly blessed with green space—the Royal Independence Gardens—while further up National Road 6 lies The Heritage Walk, the city’s only major shopping mall, with a top-floor cinema and Khmer-led design emphasising ventilation. The French Quarter extends to Sivutha Boulevard, a major artery whose array of luxury hotels is topped by the magnificent art-deco Park Hyatt, formerly known as Hôtel de la Paix. 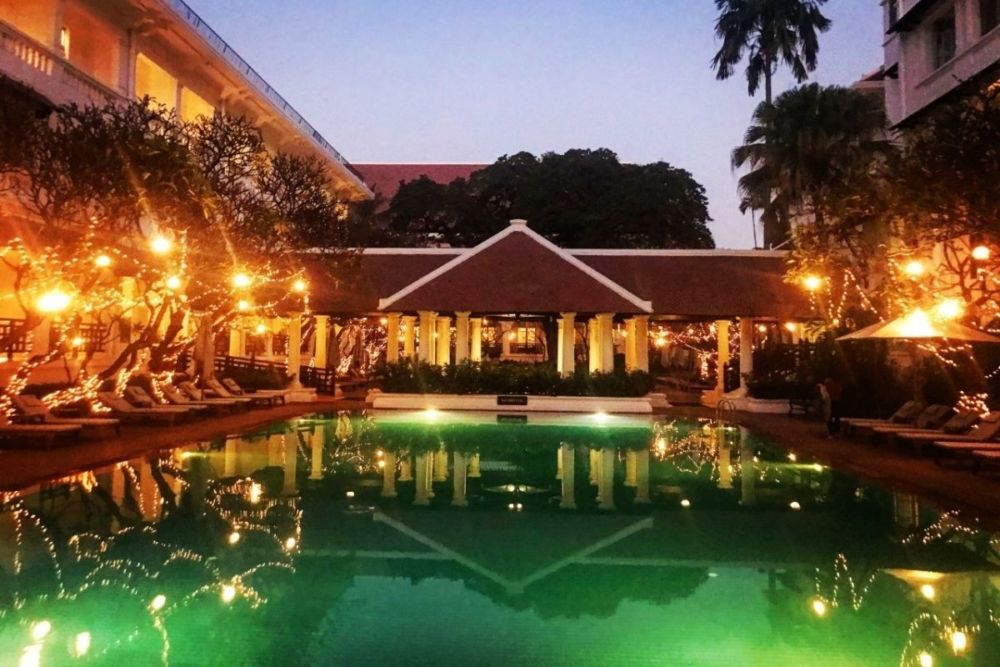 When its first bar, Angkor What?, was established in 1998, Pub Street comprised just one road, Street 8. This district north of the river subsequently expanded into a vast, sprawling multi-street hub of entertainment, with innumerable nightclubs, bars, restaurants, pop-up cocktail stands, and tattoo and massage parlours.

Pub Street was, unsurprisingly, the area hit hardest by the pandemic, when tourism ground to a halt and international flights to Cambodia flew only into Phnom Penh. But while many business owners shut down and moved out, others survived on the trickle of expat residents and domestic travellers visiting Siem Reap on public holidays such as new year, Pchum Ben, and Bon Om Touk.

Meanwhile, bars in Alley West and The Lane, the alleyways running adjacent to Pub Street—which have historically appealed more to expats—continued to do respectable business even during Covid-19, with the newly opened Bar 43, directly opposite the eternally popular Picasso Bar, staking a claim as the city’s coolest new cocktail joint. Lying by the riverside at the southern edge of Pub Street, Psar Chas (Old Market) remains a vibrant trading point, selling everything from fresh fish to jewellery, clothes, and souvenirs. 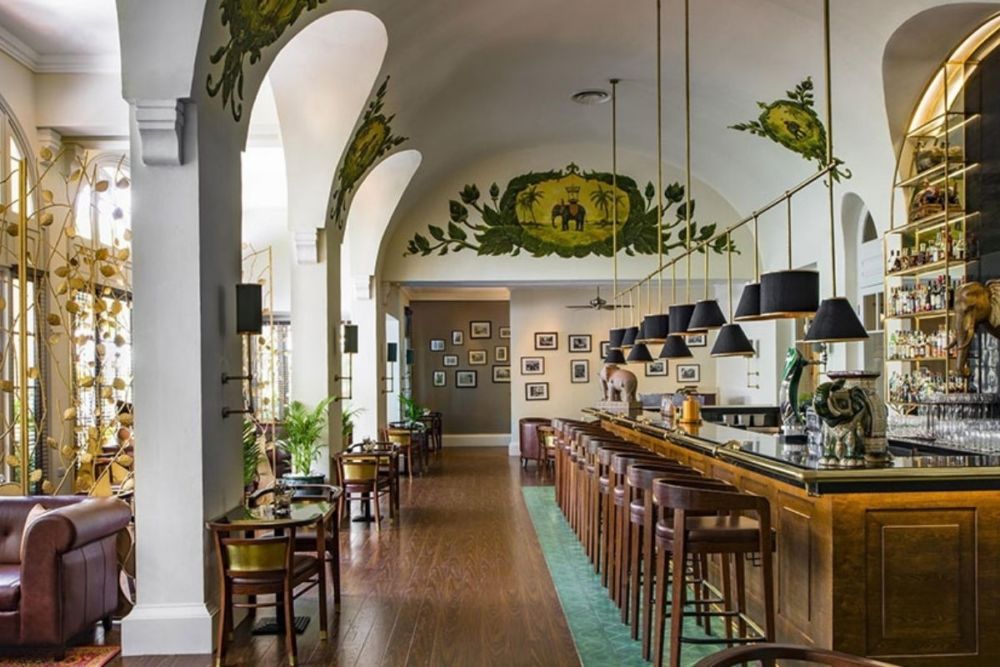 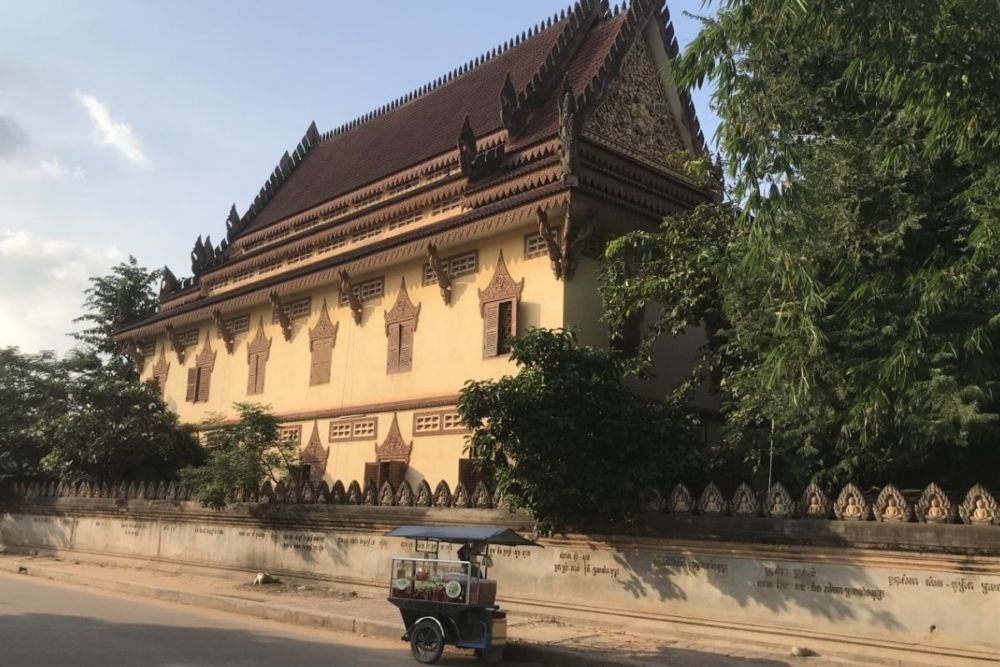 Once an obscure backwater, the area immediately south of the river is now a pulsating centre of business, art, hospitality, drinking, and dining. Just off the motorbike-heavy Wat Bo Road lies an abundance of restaurants, cafés, and bars catering to all tastes, including its most famous resident Miss Wong—the elegant, chinoiserie-themed bar recently relocated from Pub Street—and Khéma, an upscale brasserie running frequent social events.

Local outlets such as veggie hideaway Banllé and informal Tevy’s Place, a long-running Khmer restaurant, represent the fine Cambodian fare on offer in this part of town, while café culture has a strong showing with the social enterprise Footprint, design-driven riverside hangout Brown Coffee, art-laden chillout space Krousar Café, and hip co-working space BioLab all based here. Meanwhile, Cuisine Wat Damnak is one of Cambodia’s most celebrated eateries, having appeared as Indochina’s sole representative on the list of Asia’s 50 Best Restaurants. Elegant accommodation in this area is provided by the gorgeous Viroth’s Hotel and its sister property Viroth’s Villa. 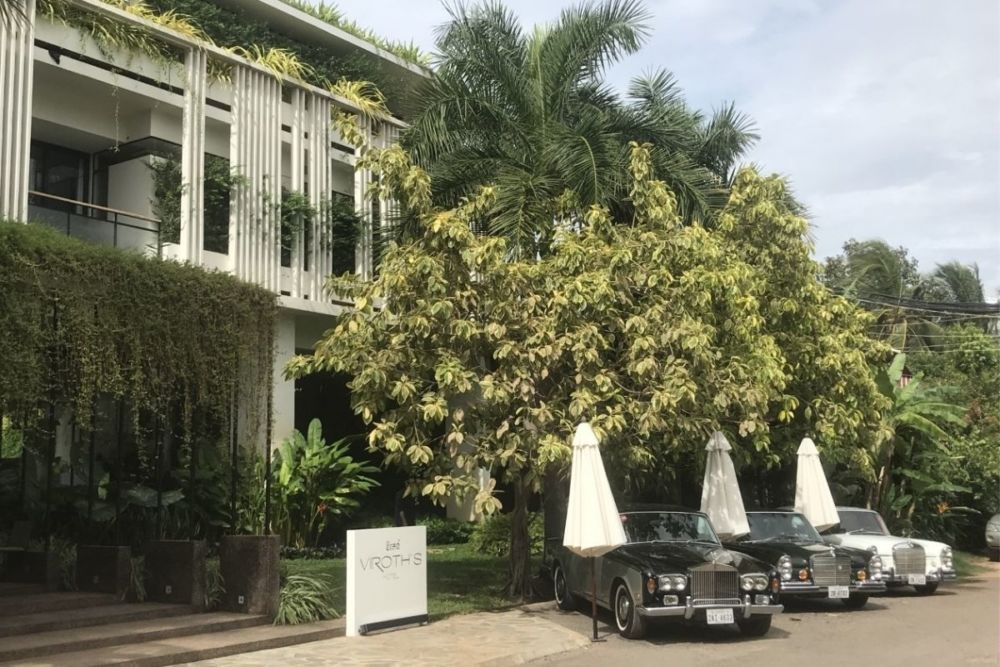 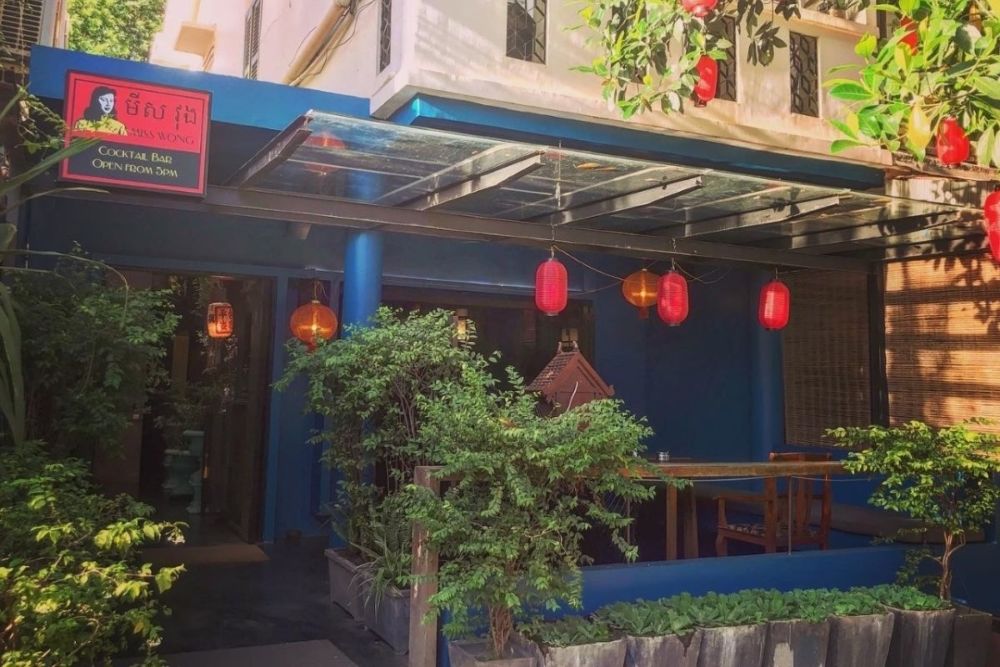 A short walk south of Wat Bo Village, with the namesake pagoda its principal landmark, Wat Damnak has evolved over the years into a backpacker-friendly district laden with cool spots to unwind. Give Kefir, a recent addition, is one of Siem Reap’s few health-drink specialists, with free tastings in its colourful outlet; opposite, Sambo wins rave reviews for its Khmer-Thai casual dining and warm welcome; and Jomno does a creative line in beautifully plated fusion street food from its wooden-house setting.

Wild, a few doors down, is a rarity in this town for its open-garden concept, where chilled-out patrons can munch on mouthwatering spring rolls and imbibe bespoke cocktails. Where the road opens out and rejoins the river—a fine walking trail which leads towards Phnom Krom and the Tonlé Sap—a recent addition is SuperFly Biker’s Shop & Bar, whose retail outlet caters for motorbike enthusiasts, while in the evenings regular DJ gigs bring this cool space to life. 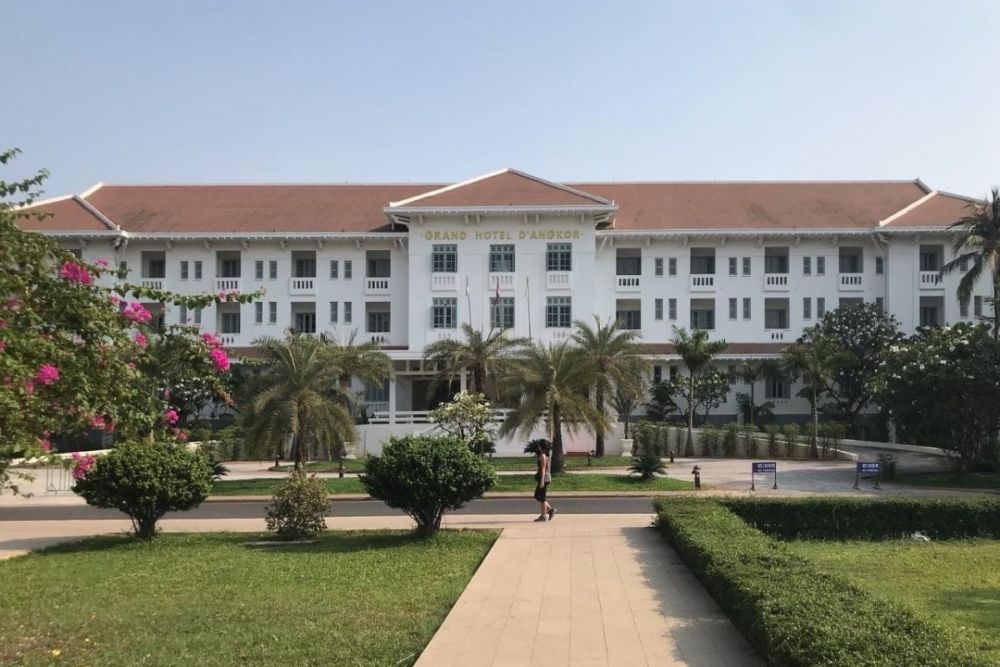 Before veering out of town to explore Angkor Archaeological Park, take time to absorb the sights along the connecting road, Charles de Gaulle Boulevard, which begins at the city’s oldest hotel, Raffles Grand Hotel d’Angkor. Spend a couple of hours perusing the Angkor National Museum, a cavernous building with treasures unearthed from the Angkorean era and beyond; drop by for refreshments at the finest five-star hotels (Amansara, Le Méridien Angkor, and Sofitel Angkor), or spend a night in a “jungloo” (private, semicircular hideaway) at boutique resort Templation.

Next door to Le Méridien, catch the technicolour spectacle of Angkor Dynasty, a vivid performance that recounts the history of Cambodia, at the Angkor Grand Theatre. Finally, head to the aptly named enclave of Charming City, which with its tidy rows of terrace apartments and minimal traffic is the polar opposite of downtown Siem Reap. In this tranquil community, imagine you’re in the leafier suburbs of Paris or London while you take lunch at Azona Café and wander around the emporium of the city’s best-known designer at Eric Raisina Couture House. 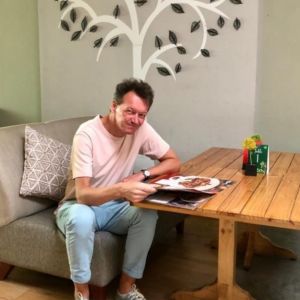