Meet the Minds Behind the Future

By priyanka_boghani 20 August 2013
share:
Tucked away in one of the many rooms of Hong Kong’s Polytechnic University, a group of creative minds huddles to tinker, tool, rewire, and ultimately show off their latest inventions. Computers were whirring and bionic arms stirring as printers spat out 3D objects ranging within the geek realm from Batman busts to chess pieces. This was the wired and exciting buzz surrounding Hong Kong’s second Mini Maker Faire, a worldwide movement bringing budding inventors out of the shadows on August 17th. 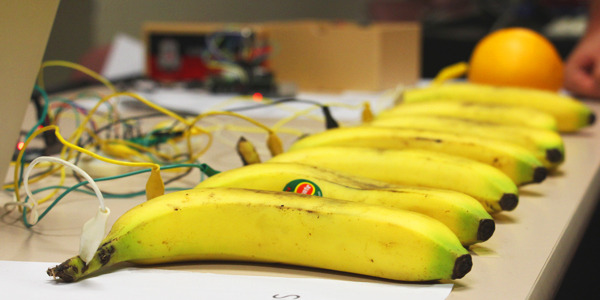 The Banana Piano was one of the inventions at this year's Mini Maker Faire
What is a Maker? A maker is anyone who likes to make, create and stretch the boundaries of technology. They are tech enthusiasts, crafters, homesteaders, scientists, garage tinkerers, robotic engineers and even lawyers. They are of different ages, backgrounds, professions and origin, but they all share one thing: a passion to inform, connect and drive society into the future. The Hong Kong Maker Club, organisers of the local Mini Maker Faire, said it’s all too easy for residents to get sucked into the materialistic world of making and spending money. “People in Hong Kong enjoy consumerism, but it can’t sustain society forever. We don’t want to see Hong Kong become a consumer market and nothing else,” said the organisers. “Our event gives people the chance to show the world what they can make.” The second Hong Kong Mini Maker Faire far outshone the first, with organisers reporting more than double the number of visitors (at least 1,000) nosing around the 55 booths. We trawled through the latest creations and spoke to the masterful minds behind them. Here’s our pick of the bunch:     Paper Gundam 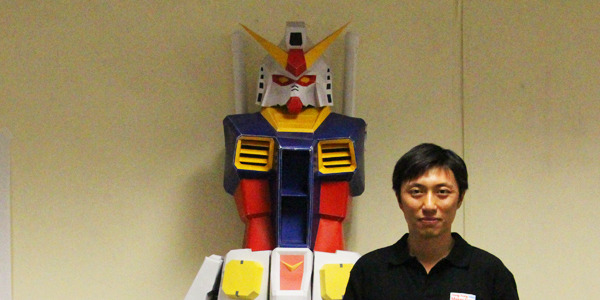 Towering at two-metres tall by the entrance of the hall was a giant robot suit made of paper and plastic, known to those in the know as a Gundam. The warrior character from a famous Japanese anime series had a life-like appeal to it, especially when its creator, Andy Wong, lifted its arm and demonstrated the way its joints move. Andy, who studied engineering and now designs smoke-detector machines, told us that it took him a year to make the Gundam, which he claims is the fourth largest in the world. “I’ve been watching anime and playing robots ever since I was six years old. When I saw a giant Gundam in the States a few years ago, I took up the challenge to create my own,” said Andy. Andy used Google SketchUp to scale his 3D drawings, and employed magnets to hold the pieces together. We asked him how he found time between his job and his social life to pursue this unusual hobby. “In my 24 hours, there are eight hours dedicated to work and eight hours dedicated to sleep. What I do with the other eight hours is this,” he said, pointing to the giant robot. Andy believes that we are heading towards a world where robots and humans will work together. “Roughly 30 years from now, we will see a time where robots will have their own football teams and participate in their own tournaments. My dream is to be part of the group of engineers making those robots,” Andy enthused.     Robotic Artist 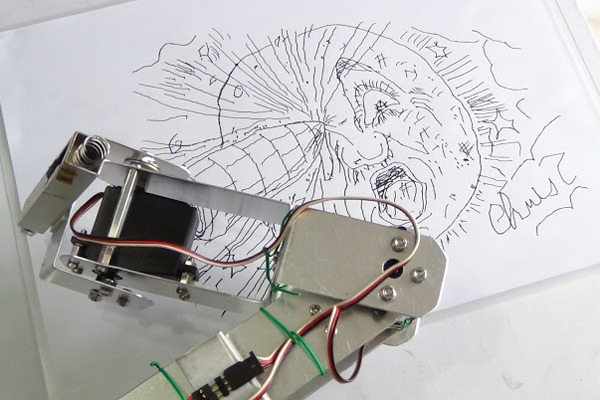 Further down the aisle, we are given a glimpse of this future with Chris Tsang’s robotic plotter arm. The steel arm holds a pen nib that mechanically shuffles across drawing paper, replicating a sketch on the computer screen it connects to. Chris - inspired by Martin Scorsese’s 3D movie Hugo, in which an automaton is also used - says it took him just one month to make. “I built this plotter arm so that artists can experience an organic feel to their drawings,” he said.     DIY Digital Clock 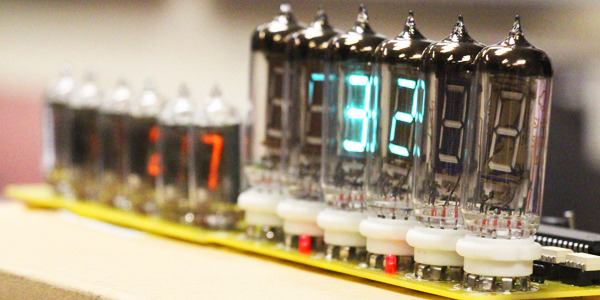 Buzzing and blinking next to the plotter arm is Victor Lee’s DIY radio and clock. With individual flashing numbers housed inside a row of glass tubes and a basic processor with a button to reset the clock, Victor’s creation was showcased in its most skeletal form to allow visitors a full view of its inner workings. The perfect present for mini makers, each DIY kit comes with soldering tools, individual components and cleaning equipment. “The FM radio is for those who want a bigger challenge!” the electronics product developer said.     Wired Organ 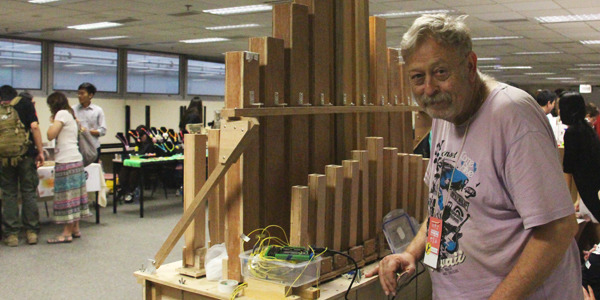 For musical lovers, Riley Cunningham’s wooden pipe organ was the star attraction. Plywood pipes of different height and width stood side-by-side on a large wooden pressurised box. Instead of a keyboard, however, Riley’s pipe organ is powered by an SD memory card, pre-programmed with music. The card sends signals to a solenoid (coil) inside the box, which in turn changes the air pressure pushing into the pipes and creates different musical tones. “I thought a pipe organ would be an interesting first project for me since I’ve always liked music,” said the recently retired steel consultant. “I’ve also always been interested in how things work. If you put anything mechanical in front of me, I’m going to be interested, so I hope those with similar minds will think the same about this project.” Riley is a member of the Dim Sum Labs , a Hong Kong-based initiative set up to nurture the community of makers and give them a space to create and share.     3D Plastic Printer 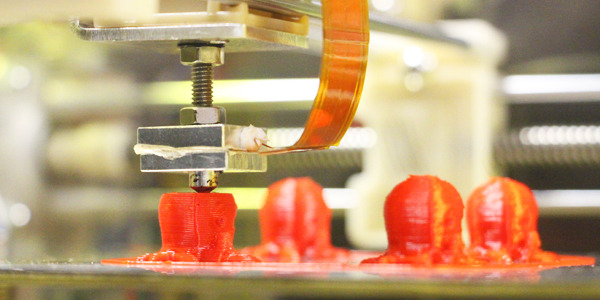 Looking on is the co-founder of Dim Sum Labs, Jonathan Buford. Two years ago, he noticed a lack of co-work space for Hong Kong’s most creative minds. In an attempt to remedy this, the tech entrepreneur gathered a group of hobbyists, programmers, engineers and DIYers to "hackjam" in a space in Sheung Wan. Now the makers' movement is finally picking up momentum in Hong Kong, Buford sees this is an opportune time to share what he calls MakiBox, the world’s cheapest desktop 3D printer. All industry eyes have been on the invention, which is selling for just US$200. Buford says Makible.com, his crowd-sourcing platform for small projects, introduced him to a range of fascinating new products. Through this screening process, he saw the demand and potential for a 3D printer that is both affordable and user-friendly. “We use cheap plastic in our 3D printers and that really sets us apart,” Buford said at the fair. “The real use for 3D printers is still in the lurch, but hobbyists can use them to make prototypes, special toys and other decorative items.” Buford says the maker community is still growing in Hong Kong, whereas countries such as Japan and Taiwan already have well-established hackerspaces.     LED Eye Mask 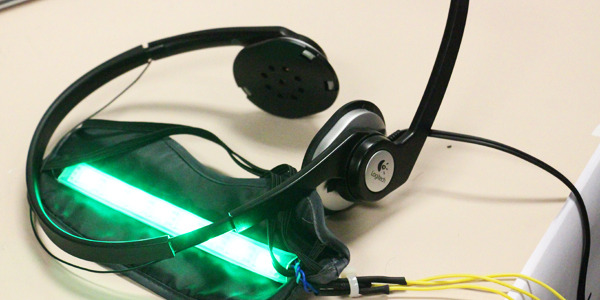 There were audible gasps coming from the large crowd surrounding former lawyer Tom Grek’s mood-changing eye mask. Grek, also a member of Dim Sum Labs, combined his interest in hypnosis and technology by creating an eye mask that is studded with flashing LED lights and plays music in an attempt to change the wearer’s brain waves. Grek says that via the light show, wearers are taken into a lucid, dream-like state. “I’m hoping this mask will be useful to people who want to relax before they sleep, before they study or even just to mediate,” Grek said as he points to the mask and urges me to see for myself. “The maker’s movement has taken a while to get established here in Hong Kong, but with Shenzhen close by, I can see an ecosystem evolving.”

In a world of mass-produced products, it’s refreshing and reassuring to know that people are still taking big steps with small business and forging an inventive future for us all. In Hong Kong, this maker’s movement is only just getting started!