For anyone who grew up in Hong Kong, weekend brunch with the family naturally comes in the form of dim sum (點心): a variety of bite-sized Cantonese comfort dishes typically eaten with tea and shared among loved ones in a Chinese teahouse.

Although the age-old culinary tradition finds its humble roots in ancient China, dim sum has so deeply ingrained itself into Hong Kong culture that’s it has practically become a local institution, with young and old universally rejoicing in the classic dining ritual.

If you’re wondering how this culinary phenomenon came to flourish in our city, join us as we delve into the history of dim sum, from its etymological inception thousands of years ago to the sumptuous family affair it has evolved into today. 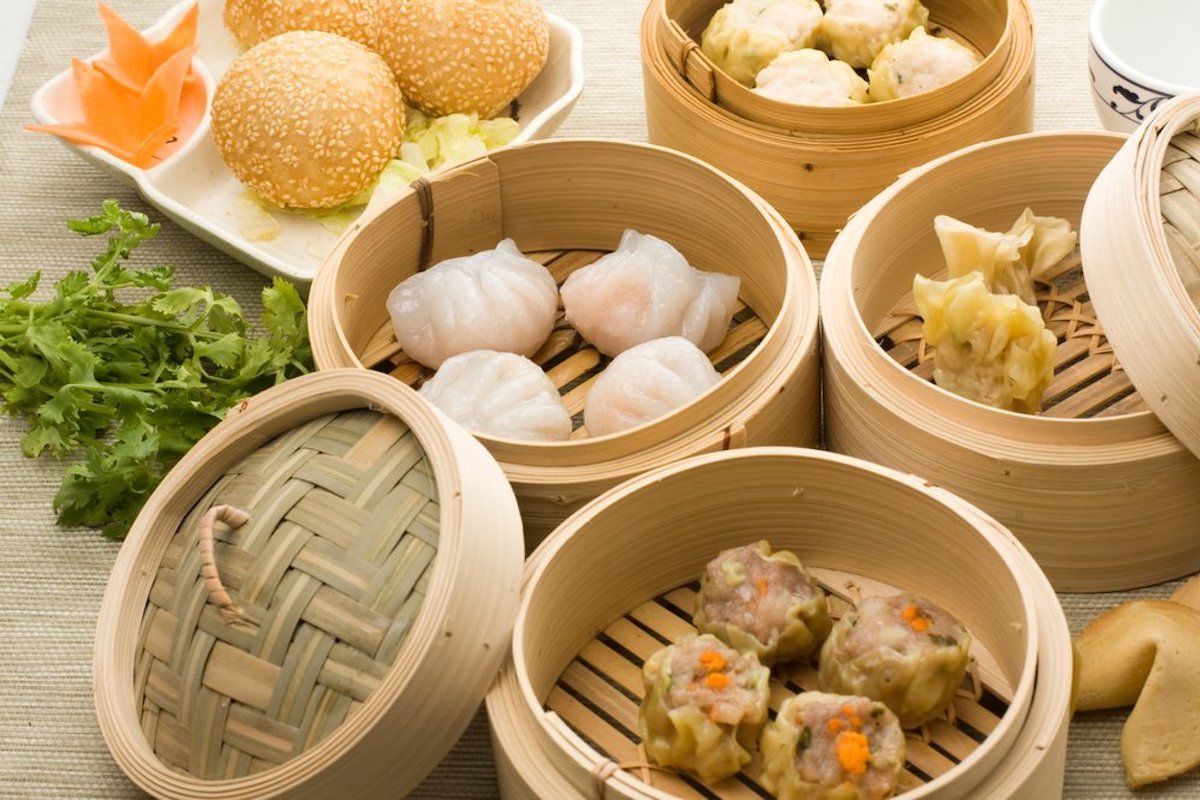 Bites that touch the heart

Literally meaning “touch the heart” in Chinese, dim sum has been a beloved national treasure for centuries, though its exact origins are somewhat obscured by the fog of time. One legend sees its distant roots all the way back in the Eastern Jin dynasty (317 AD–420 AD) when a general rallied civilians to cook up an assortment of cakes and buns to send to front-line battlefield soldiers as a heartfelt expression of gratitude for their service, or as it was expressed in Chinese, “點點心意” (dim2 dim2 sam1 ji3). The term “dim sum” purportedly emerged as a shorthand of the phrase. 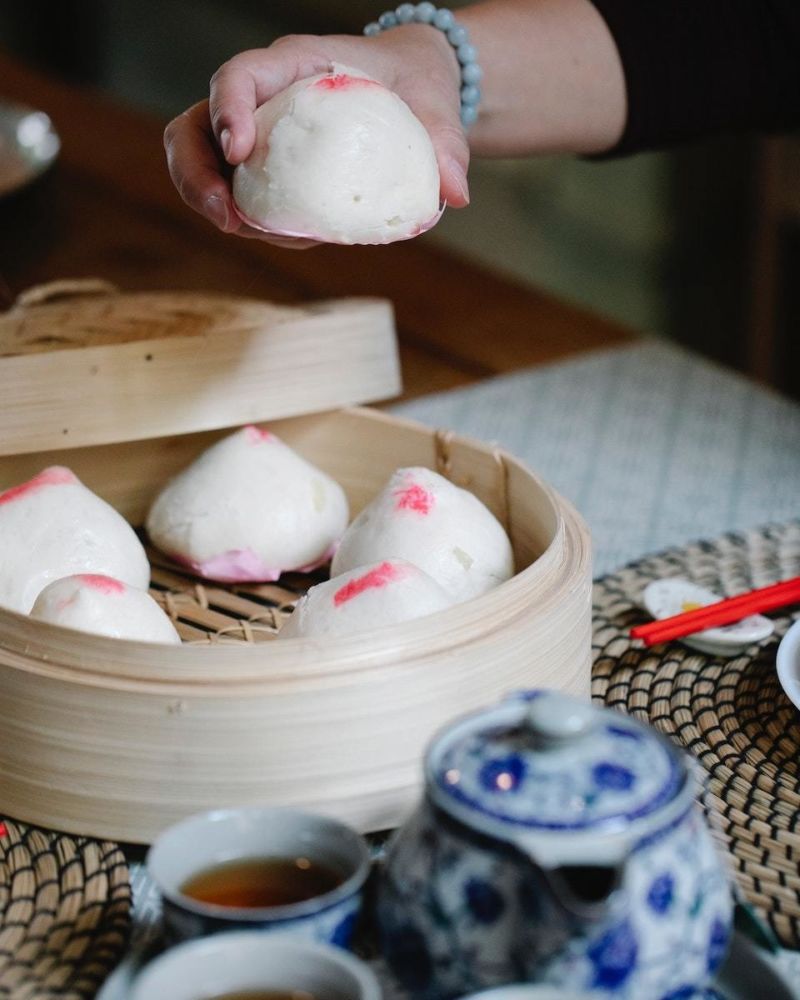 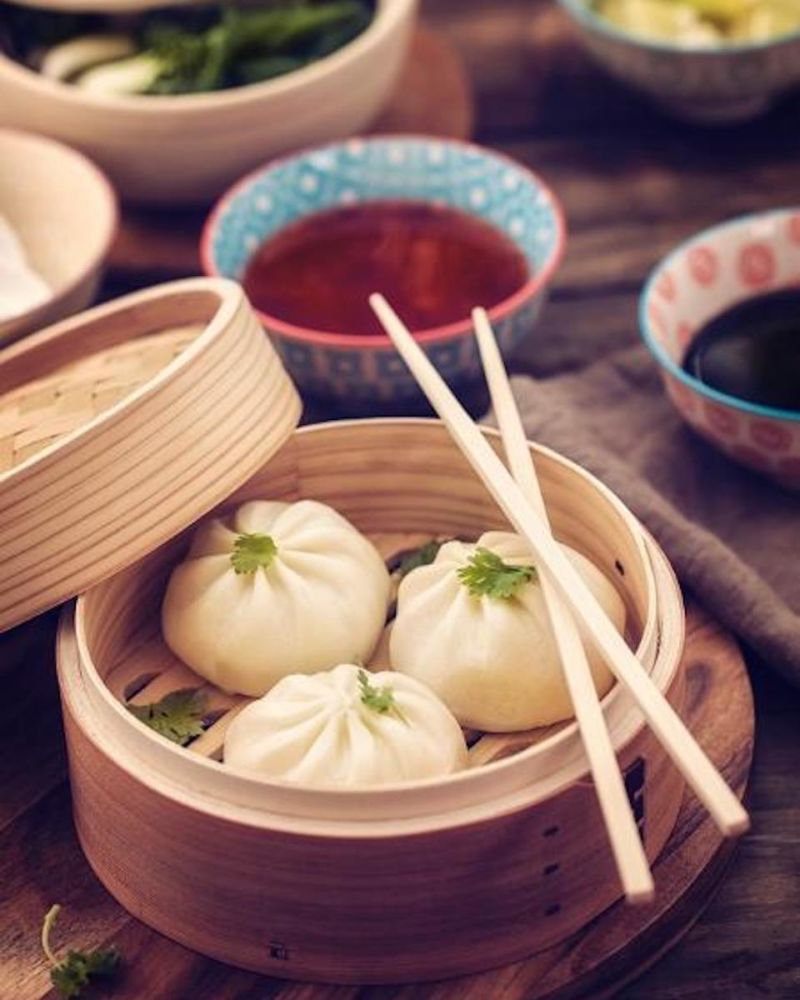 While stories may be just stories, written historical accounts can ascertain that the concept of dim sum existed at least as far back as the Tang dynasty (618 AD–907 AD). Among the earliest records of the term “dim sum” comes from the Book of Tang. As the account goes, there was a state official who invited a guest over to his house one morning.

However, as the official’s wife was still getting ready and could not prepare a full breakfast, some small dishes were served instead to tide the guest over. In the text, the expression “dim sum” was used as a verb to mean “barely filling the stomach.”

Although this early manifestation of dim sum was a far cry from the sumptuous teahouse repast it has become today, broadly referring to light morning snacks, it was nevertheless no scrappy affair, but rather something presentable and offered on a special occasion. 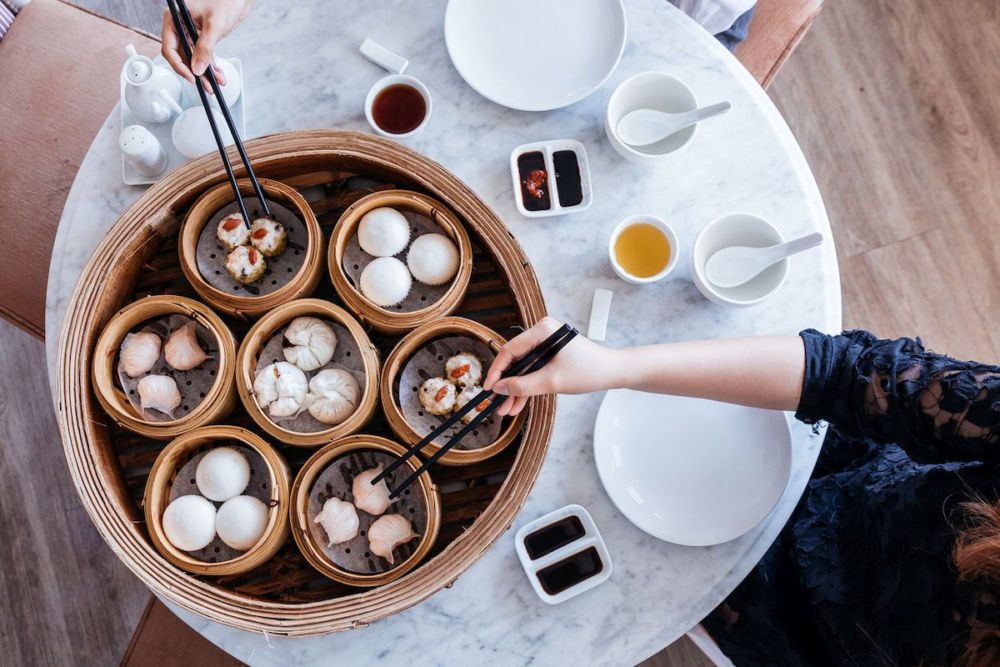 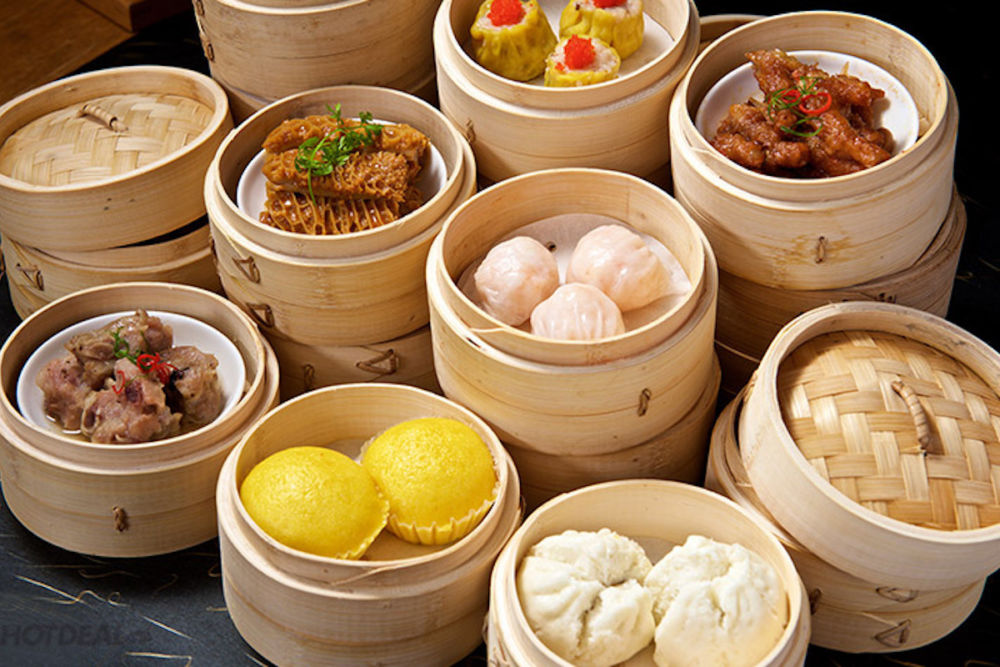 Although a vague notion of dim sum long existed across China, Guangzhou is often touted as the birthplace of modern dim sum, as it was there that the distinctive Cantonese tradition—often synonymously referred to as yum cha (飲茶; “drinking tea”)—started to take shape.

During the Qing dynasty, Guangzhou was a focal trading port along the Maritime Silk Road. Weary from their long pilgrimages, travellers would make pit stops to roadside teahouses (茶樓; caa4 lau4) where they would replenish themselves with small plates of food, complemented by Chinese tea for digestion.

Equally a place for socialising, these eateries also turned into a prominent meeting point for merchants to discuss business deals in a more relaxed setting; and it was thus that the blueprint of Cantonese dim sum culture was born.

More than just sustenance, dim sum was a shared communal experience and a more accessible form of luxury. Befittingly, its offerings were often dainty and time-consuming to prepare. It covered a myriad of steamed, deep-fried, and braised dishes that were typically considered too laborious to make at home.

Combining the inimitable experience of the small-plate gastronomic meal with the region’s strategic location as a foreign trade centre, dim sum was able to thrive and blossom throughout the second half of the nineteenth century; and it wasn’t long before its popularity swiftly caught on in Hong Kong, Guangzhou’s southern neighbour.

Hidden Hong Kong: A history of the cha chaan ... 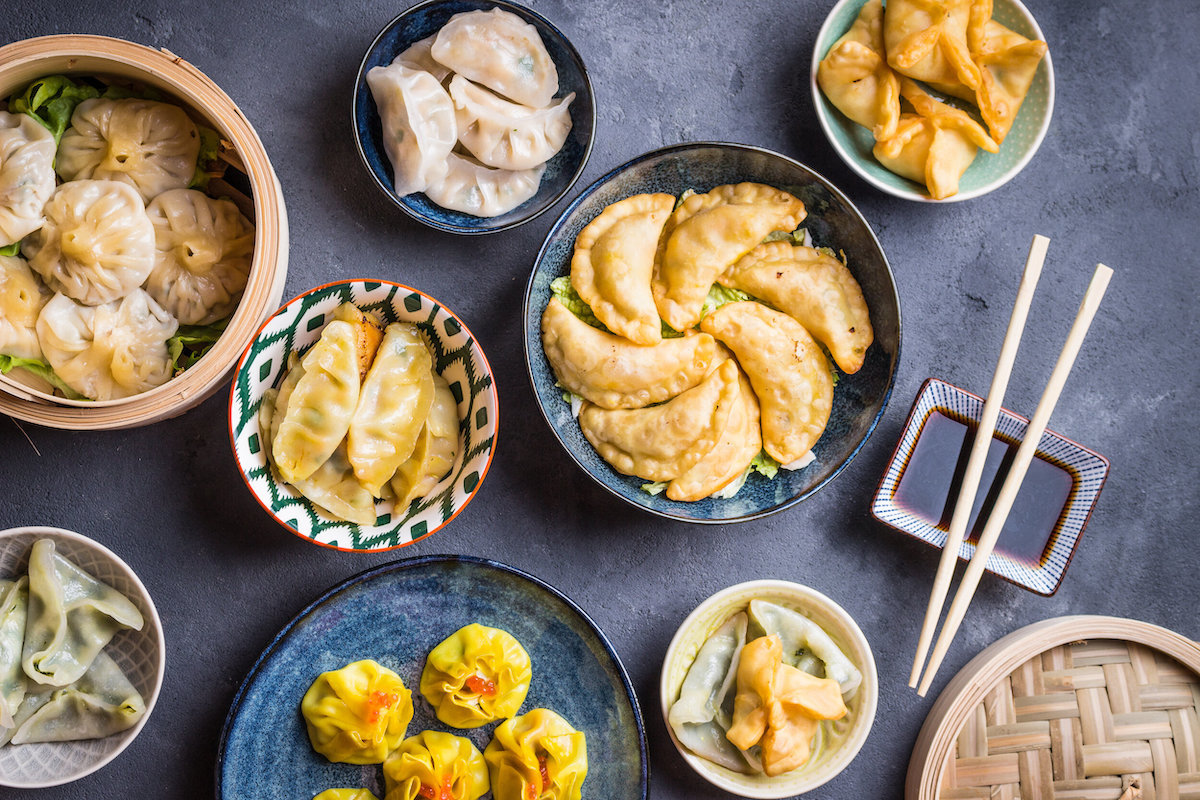 With the dietary overlaps of Guangzhou and Hong Kong, it’s easy to see how dim sum was able to colonise our local culinary landscape with little resistance.

By the early twentieth century, a hub of teahouses had cropped up in the Sai Ying Pun, Sheung Wan, and Central area, serving tea and a broad variety of dim sum. Among the most successful of them was the renowned Lin Heung Tea House, which opened in the 1920s and continues to peddle scrumptious dim sum to this day!

As per the Cantonese tradition, early teahouses in Hong Kong only operated from morning till lunch hours; while traditional Cantonese restaurants (酒樓; zau2 lau4) would take over dinner service. It wasn’t until after the Second World War that the two types of Chinese eateries became largely interchangeable with one another, as many of them started providing all-day dining service. Yet, by then, the association of dim sum fare with meals earlier in the day had already been deeply implanted in our cultural consciousness and has carried over to the present day. 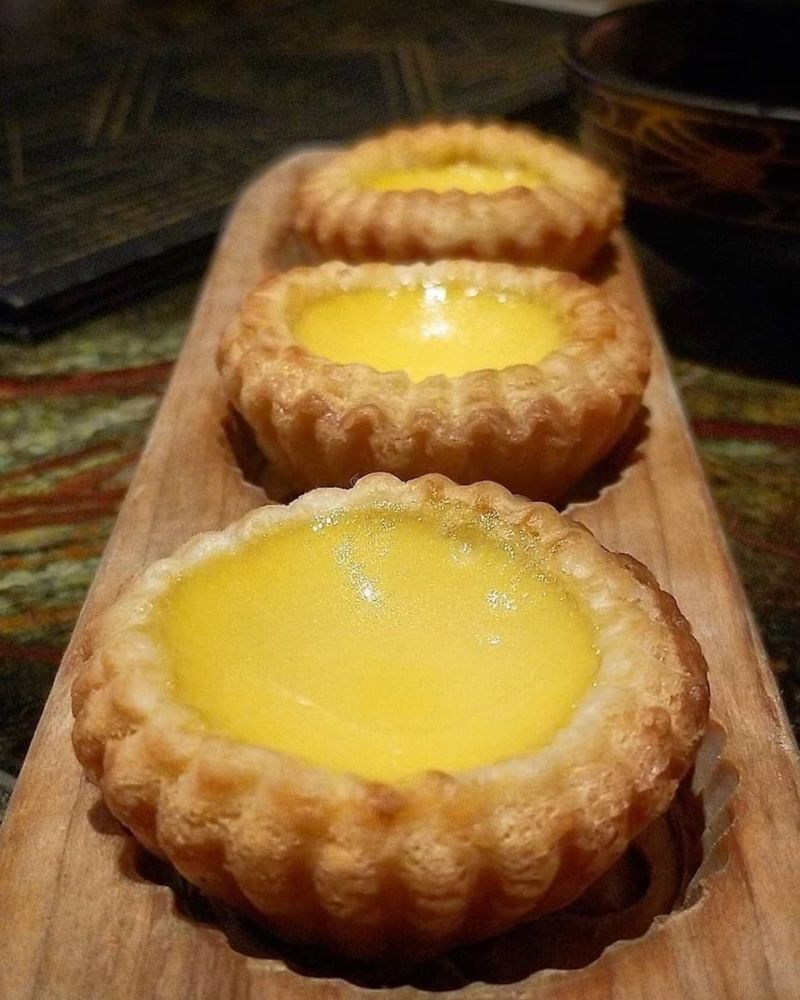 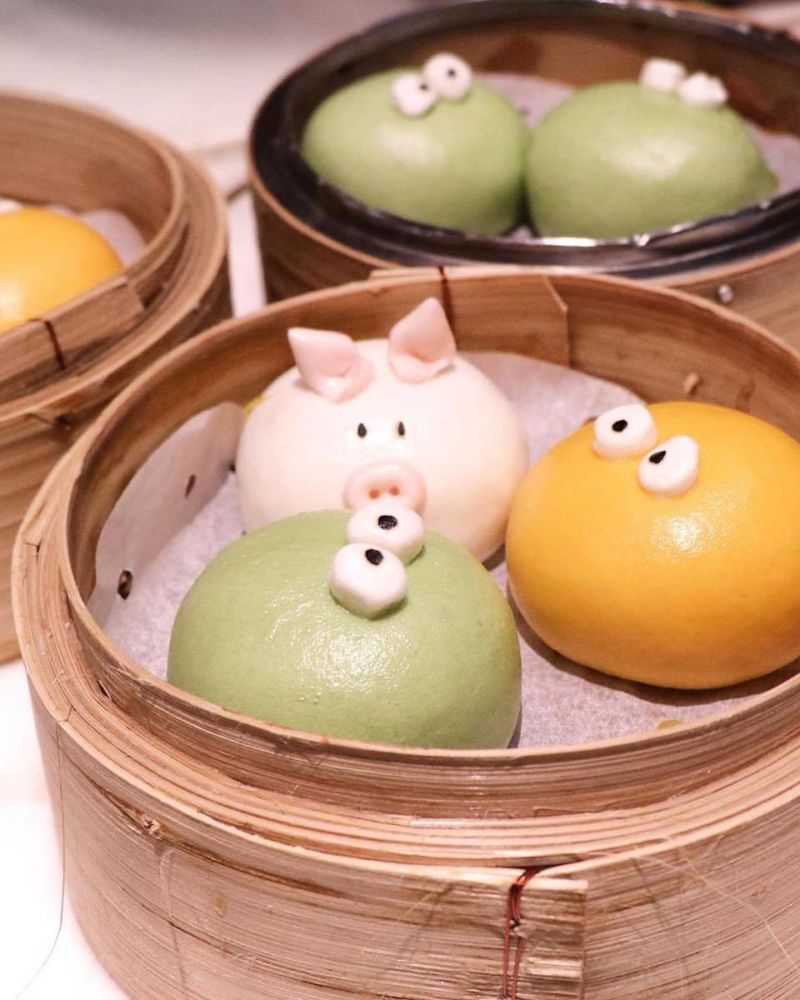 As the custom of dim sum took root in Hong Kong, the cuisine gradually moulded into its own identity, incorporating a touch of Western influence to reflect Hong Kong’s colonial and cultural roots. Traditionally, dim sum is a hodgepodge of various comfort dishes popular in the Guangdong province, including notable favourites like siu mai (燒賣), shrimp dumplings, barbecued pork buns, rice noodle rolls, and chicken feet. And while many of these dishes have remained staples in Hong Kong’s dim sum scene, a slew of local delicacies has woven their way into the cuisine and become just as formidable.

Local teahouses began to harmonise Chinese and Western tastes, introducing Western ingredients and cooking styles like baking into their kitchens. This led to fusion items like egg tarts, mango pudding with evaporated milk, and the beloved custard bun trickling their way onto the menu. Now, you can hardly call a dim sum menu complete without these big-hitting essentials!

One of the main draws of dim sum is its diversity of flavours of textures, making it approachable for virtually every palate. Unsurprisingly then, as dim sum evolved into an increasingly inclusive cuisine in Hong Kong, it attracted a fanbase that spanned globally. By virtue of this encompassing advantage, our city is now hailed as the indisputable world capital of dim sum, with people around the world coming to Hong Kong for a taste of what is regarded as a quintessential local dining experience. 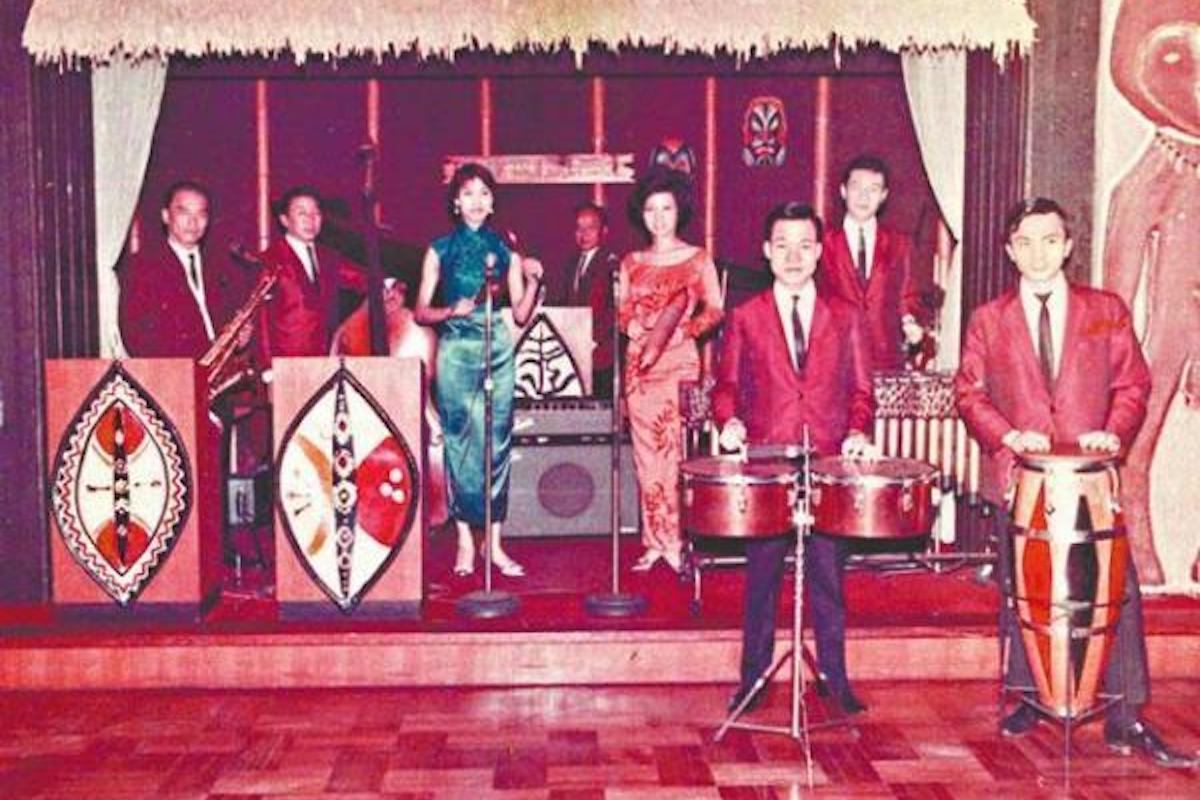 Bustling pushcarts, rowdy crowds, and steaming teapots are all hallmarks of dim sum as we know it—but believe it or not, it wasn’t always that way. The culture around dim sum has come a long way since its initial arrival on our shores.

While dim sum has always held an appeal that transcended generational and social boundaries, in the early days, social class was nonetheless distinguished by where you sat in the tearoom. Typically, the upper and middle class would occupy the upstairs area where it was quieter and more spacious, while the working class would sit downstairs on the ground floor.

To create a relaxed yet convivial space conducive to casual get-togethers and catching up, some upscale teahouses would even play music and provide Chinese board games for guests to bond over as they sipped and nibbled. However, these entertainment frills were phased out after the 1970s when Hong Kong’s economy rapidly picked up and people started adopting a more fast-paced lifestyle. 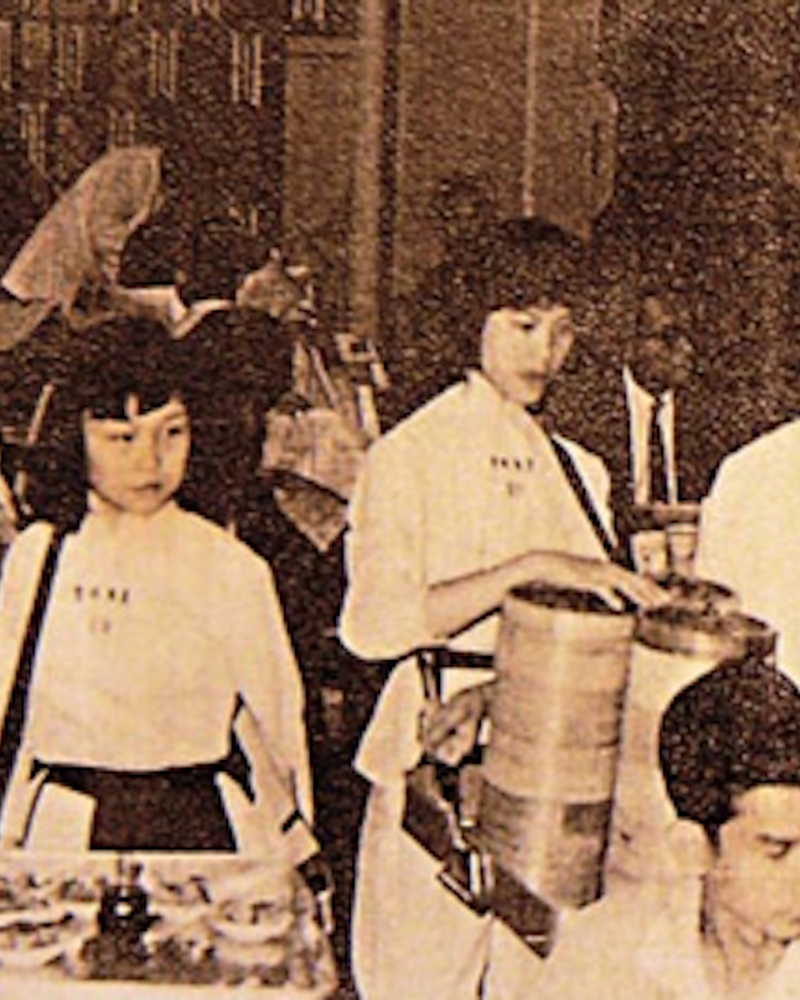 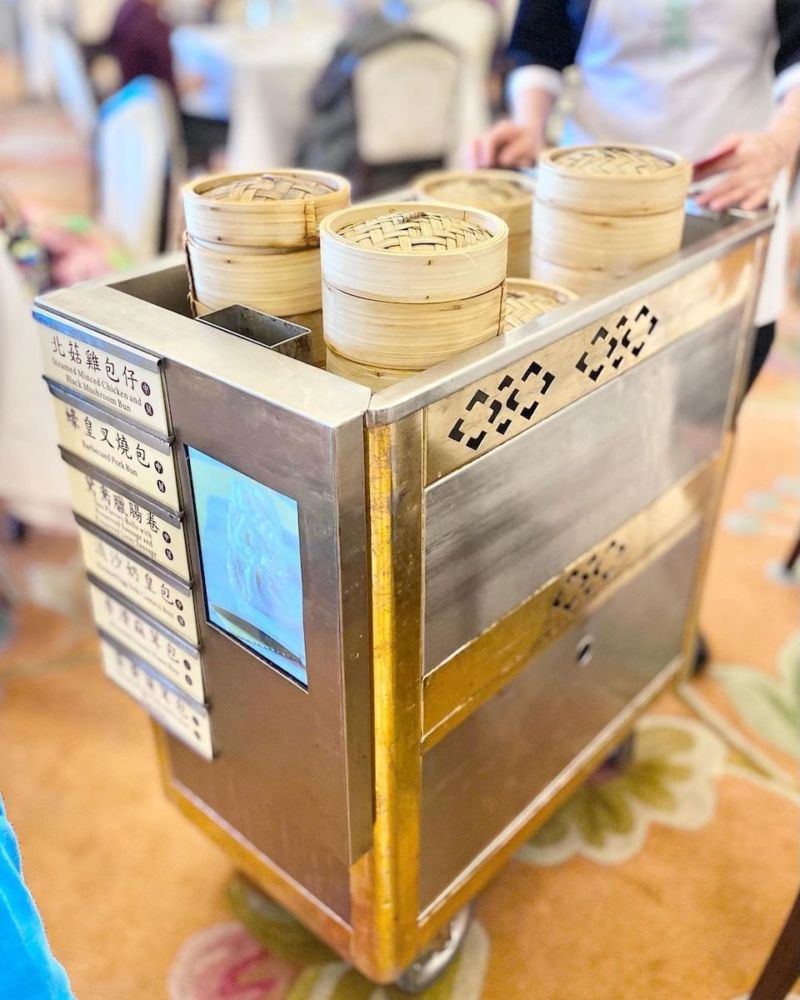 When it came to serving dim sum, it was (quite literally) back-breaking work. For the first half of the twentieth century, servers would carry around large trays that were strapped to their bodies and stacked tall with bamboo steamers, then proceed to make their way up and down the teahouse shouting out their wares. This was common practice up until around the 1950s when the cumbersome tethered trays were replaced with the iconic trolley carts.

Even tea was served differently back in the day. Instead of rounded porcelain teapots, the steamy beverage was offered in lidded bowls, giving roots to the popular vernacular phrase “一盅兩件,” translated to “one bowl two pieces.”

Before dim sum became the hearty brunch occasion that it is today, people would use the phrase to order one bowl of tea and two varieties of dim sum and call it a meal. Although the term may no longer be fit for purpose, it has nonetheless become a byword for the culinary icon. 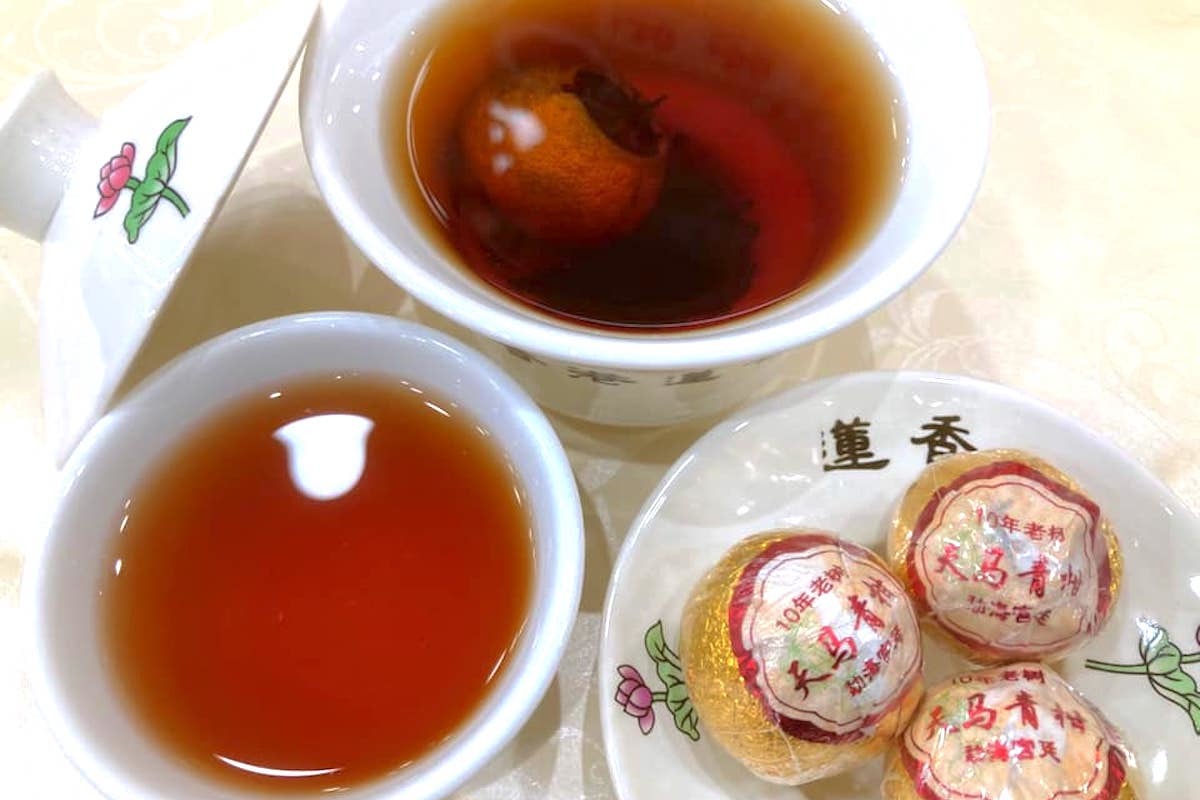 Today, dim sum has evolved into a decidedly sumptuous affair, often reserved for weekends and unhurried mornings. In recent decades, there has been a shift in focus from the tea to the food, with menus becoming more extensive and imaginative by the day. At the same time, to pander to the modern Instagram-obsessed crowd, the presentation has also been taken to the next level. From adorable piggy-shaped BBQ buns to brightly coloured dumplings, dim sum has practically become edible canvases for art!

However, as with most things in life, you can’t have your cake and eat it too. The reinvention of new traditions inevitably comes in the same breath as the desertion of old practices. As rent space becomes increasingly valuable, clunky pushcarts are becoming anachronistic, ditched in favour of hand-written ordering sheets to save space and labour. Nowadays, only a small fraction of Hong Kong’s dim sum restaurants still stick to using old-school trolleys. 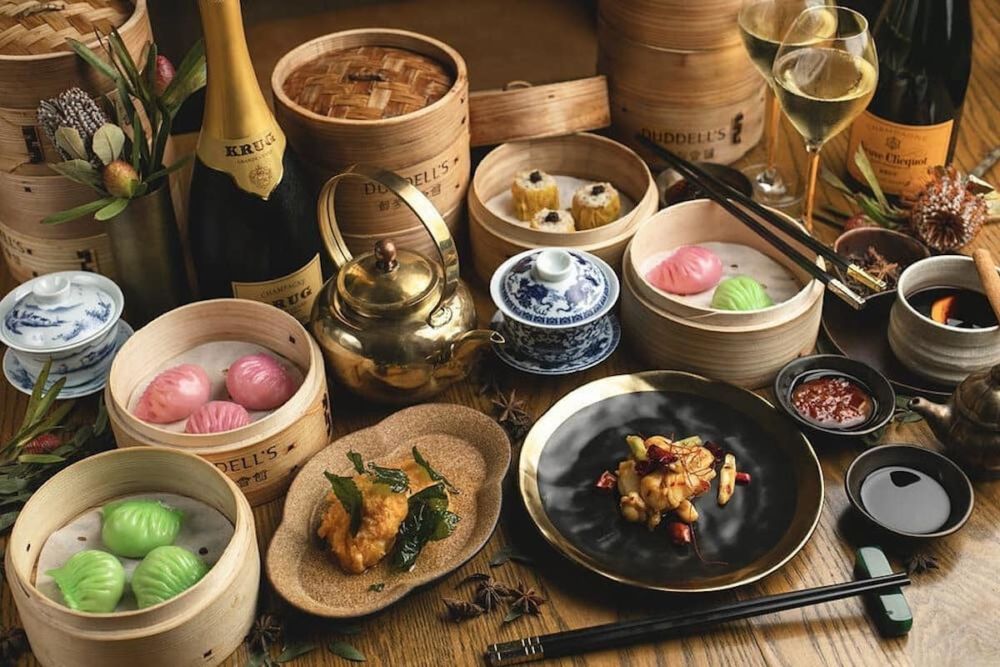 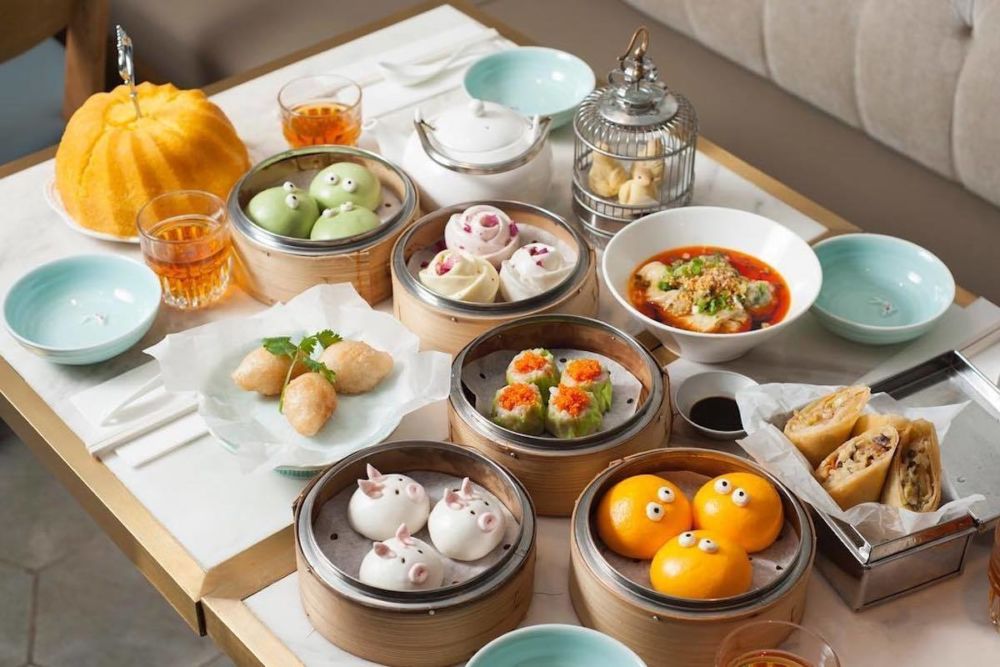 In spite of these changes, dim sum has endured as the beating heart of Hong Kong. Maybe our taste buds have been trained to register tea and steamy parcels of stuffed meats and sweet dumplings as comfort food; or perhaps the time-honoured culinary ritual simply appeals to our nostalgic yearnings, as the communal nature of dim sum makes it a prime breeding ground for joyful memories and sentimentality. Either way, there is no contesting that Hong Kong takes dim sum with the highest level of seriousness. As the tradition of dim sum continues to evolve, we continue to embrace it an indispensable part of our culture, a cherished bonding experience, and ultimately, our city’s pride and joy. 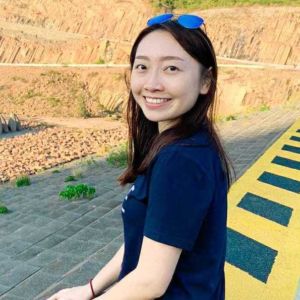 New Restaurants: Where to eat & drink in Hong Kong this June