A dog that was found dead on the tracks of Fanling Station yesterday has sparked a social media firestorm fueled by animal advocates and supporters of the MTR, with more than 1,000 comments posted to the transportation company’s Facebook page. Reactions to the news prompted an array of posts ranging from organizing a vigil for the dog and a cartoon depicting a successful rescue to death threats and boycotts of the MTR.

Social media platforms including Twitter erupted earlier today with photos and video of the reportedly stray dog, first sighted at Sheung Shui Station at 9:50am Wednesday morning according to a statement from the MTR. The dog can be seen struggling to climb up to the platform as passengers watched and at least one tried to grab hold of the helpless canine.

According to the MTR, the Operations Control centre stopped incoming trains while staff members tried to coax the animal to safety. One staff member was injured in the process, details of the injury have yet to be released, and the dog fled. Traffic resumed at 9:58am and drivers were instructed to manually operate trains under a reduced speed. Shortly after, at 10:09am the dog appeared at Fanling Station and staff members stopped an incoming train but were unable to locate the dog. After the train was allowed to depart, the dog was discovered, dead on the track.

In its statement the MTR said it “and the staff members who tried to bring the animal to safety are saddened by the event.” However, at least one animal welfare agency has come forward with a critical eye of the MTR’s rescue procedures.

Localiiz spoke with Rebecca Ngan of the Society for the Prevention of Cruelty to Animals (SPCA) who stated that the organization was not approached to assist in the repeated rescue attempts. “This incident is extremely unfortunate and tragic. [It could] be avoided if they refer it to professional hands like SPCA or [Agriculture, Fisheries, and Conservation Department]… our 24 hour rescue team has been trained in animal rescue and geared with appropriate equipment for efficient and safe rescue.” 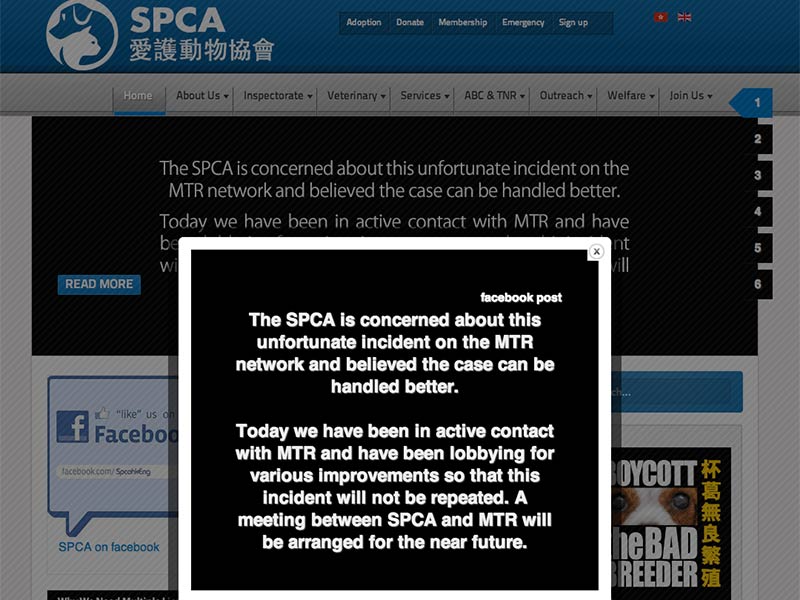 Ngan said that the SPCA has been in contact with the MTR on previous occasions and “asked to set up meetings to provide them with viable solutions, including reaching out to our 24 hour rescue hotline.” The SPCA’s inspectorate team handled 1,724 rescue cases between 2012 and 2013.

In a statement posted on Facebook and the homepage of its website, the SPCA stated it “is concerned about this unfortunate incident and believed the case can be handled better. Today we have been in active contact with MTR and have been lobbying for various improvements so that this incident will not be repeated. A meeting between SPCA and MTR will be arranged for the near future.”

MTR spokesman, Kendrew Wong, told Localiiz that the company plans to assess its animal rescue procedures. "We will review our handling of the situation and seek assistance from animal welfare organisations on what further measures we can employ to help us to better protect animals venturing into MTR premises."

Wong also addressed the stream of social media comments. "We thank members of the social media community for their frank and candid opinion and wish to reassure them that MTR is a company that is committed to seeking continuous improvements."