By Localiiz 13 June 2014
share:
June 13th 2014 So the World Cup has officially started. We should be celebrating, but with all the late nights, bar snacks and beer, we’re all going to be a mess by the time the month is over! But never fear, as the Hong Kong Department of Health has released a set of detailed (and completely ridiculous) tips for maintaining your wellbeing during the tournament.

No, no... definitely don't do this. You'll suffocate yourself

Although we appreciate the concern for citizens, Hong Kong’s guidelines for surviving the FIFA World Cup 2014 unscathed raised some giggles within the Localiiz office. According to a post on the Health Protection Centre’s website: “A spokesman for the Department of Health (DH) said today (June 11) that even though some football fans love crispy snacks (such as potato chips and fried food), sugary drinks and alcoholic beverages while watching the matches, it is important to maintain healthy eating, get sufficient sleep, refrain from using tobacco and comply with the smoking ban, as well as avoid alcohol consumption.” While most of this may the unavoidable for the genuinely committed football fan, we thought we’d pull out a few of our favourite pointers, just for your amusement (and safety of course). 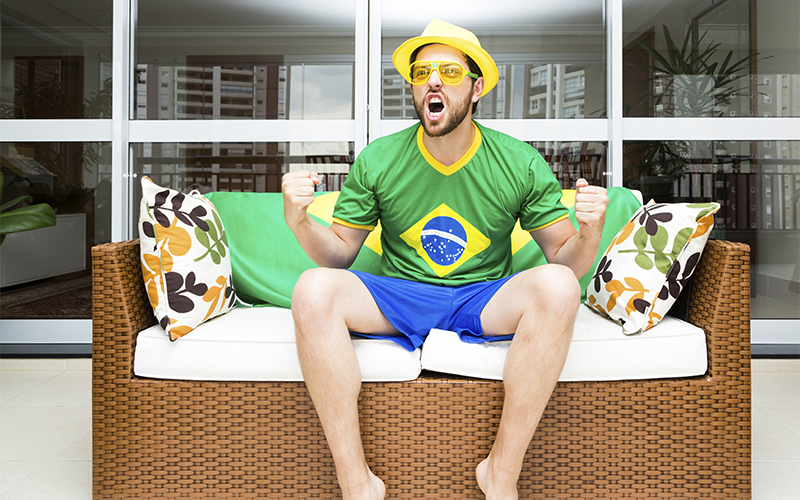 How you should be enjoying the world cup - safely, alone, and being the dude that wears sunglasses indoors. Alone.

* Drink plenty of water or prepare a delicious and refreshing drink at home (such as home-made lemonade by mixing the lime and soda water together) instead of beer and soft drinks if you do not want extra calories - can this really be serious? * Choose healthier snacks such as baked potato chips, baked sweet potato chips, corn chips, unsalted nuts and low-fat popcorn, and eat in moderation – excuse me angry, overworked barman, I’d like some low-fat popcorn with the homemade lemonade I brought in please! * Limit fatty and sugary snacks (such as potato chips, shrimp sticks and buttered popcorn) - what on Earth are shrimp sticks? They sound delicious * When you feel like smoking, wash your face, do stretching exercises, try deep breathing and drink water to divert your attention from the urge – yeah, nothing beats a nicotine craving like washing your face and drinking water! * Consume snacks only when you are hungry. Do not snack for the sake of snacking – If a snack is not for the sake of snacking, can it truly be a snack? *Stretch and move around while watching the matches – because no-one ever moves when watching a football game * Sit properly while watching a soccer match to avoid muscle aches afterwards – backs straight, chins up, no slumping now! * Strike a balance between watching matches and fulfilling your social commitments – i.e. don’t ignore your WAG So there you have it, a fool-proof guide for surviving the World Cup…as a supporter… watching TV… in Hong Kong. You could of course just stay at home and ignore it. Don’t say we didn’t warn you!