What we Learnt at Social Media Matters 2013

By crystal_wilde 17 September 2013
share:
Despite all the hype, Social Media Matters 2013 did not disappoint. Alongside fascinating case studies, inspiring insights and hilarious viral videos, the 900-strong attendees at the Grand Hyatt were treated to a master class on what it is to be popular, as the conference was ambushed by hundreds of screaming teenage girls. This was Social Media Matters, Macbarbie07 style. 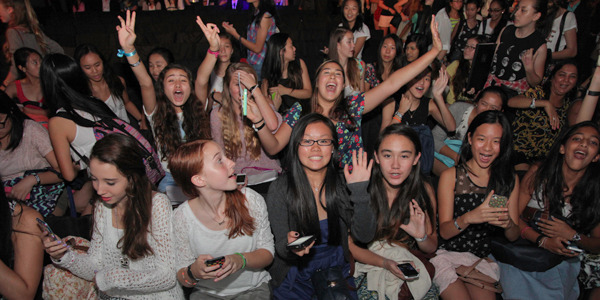 Like most in the above-adolescent world, the Localiiz team was completely oblivious to the existence of teenage YouTube sensation Bethany Mota before Social Media Matters 2013. After the conference blasted into action with a barrage of blue and pink lighting and a burst of Chemical Brothers, Bethany’s name was the first to be dropped by our hosts. Since arriving in the city and updating her social media status, the California girl had clocked up 242,000 likes on a Hong Kong Facebook photo post and 1,600 replies to her arrival Tweet. But that’s enough about her….for now! Here’s what else we learnt.     Trust Our first speaker was Scott Monty, global head of social media for Ford, which currently boasts 80 different Facebook pages across the world and more than 19 million fans. One of Ford’s most successful social media campaigns was the introduction of Ford Doug, a so-called “spokespuppet” who teamed up with comedy actor John Ross Bowie in an attempt to give the Ford Focus a touch of cool. After starring in a series of fun, off-brand YouTube videos, Doug pulled in four million views, 44,000 Facebook fans and raised popular opinion about Ford by 78%. Scott said companies should focus on creating strong products and good content, but ultimately hand social media marketing over to the customers, as people trust each other and third parties more than brands. Scott’s Top Insights: - 90% of social media is just showing up, knowing what platforms your customers are on and being there. It's the other half that's hard. - A ‘Like’ is a digital grunt. - You have two ears and one mouth -use them in that proportion. - If you have a good product, let go of your fear and let others tell your story.     Immediacy and Flexibility James Kondo, managing director of East Asia Twitter, spoke about the importance of immediacy and flexibility in social media, giving this year’s Super Bowl blackout as an example of good practice. Brands were spending millions on advertising, just to have their plugs plunged into darkness as the power went out at the Mercedes-Benz Superdome in New Orleans. Refusing to lay down and die quietly however, Oreos posted this now-legendary Tweet. 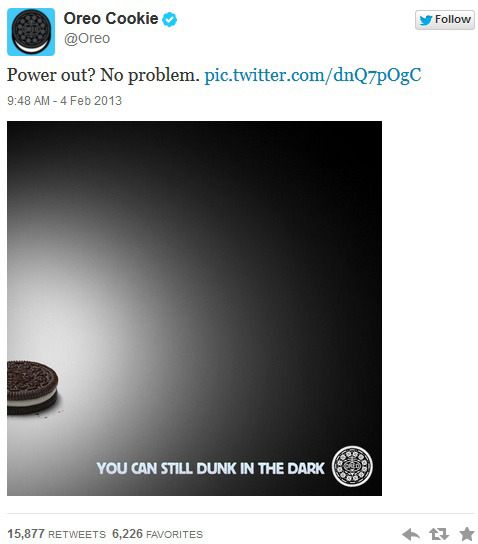 James described Oreos as the “winners of the Super Bowl”, but added than many brands are reluctant to relinquish control and adapt to fast changes. He said those who play the game right can become big winners, but dubbed American shoe giant Kenneth Cole as the platform’s biggest loser following a recent Tweet that made light of the war in Syria. "’Boots on the ground’ or not, let's not forget about sandals, pumps and loafers,” Kenneth Cole posted on September 5th , to much uproar. Besides from saying that Twitter currently feels little pressure from emerging social media platforms, James predicted that the intervention of TV and Twitter will be the next big thing. He gave Castle in the Sky as an example of this, after the 10-year-old classic Hayao Miyazaki animated movie recently racked up a record 143,000 Tweets per second while being screened on Japanese TV. James’ Top Insights - There is a frontier of creativity and ‘stupidness’ being explored on Twitter, but you will find out in five seconds which one you are. - People are not interested in Twitter’s point of view, they are interested in the breath of material that goes out. - Line is doing phenomenal things in creating an app that can expand so quickly.     Make Data Sexy Stew Langille, CEO of Visual.ly, the largest database of graphic data visualisations in the world, stressed the ease with which company data can be made into compelling stories. He pointed out that visualised data is 30 times more likely to be shared than text data, and directed the audience to ‘Proof that we are Soul Mates’, the most popular infographic of all time. Based on a Harvard study that calculated the odds of you being born – essentially zero – it’s been shared so much because it makes us appreciate the fact that we’re alive, said Stew. Stew’s Top Insight - Data turns stories into content and real news. It gives brands inventory and substance.     Mobile Matters 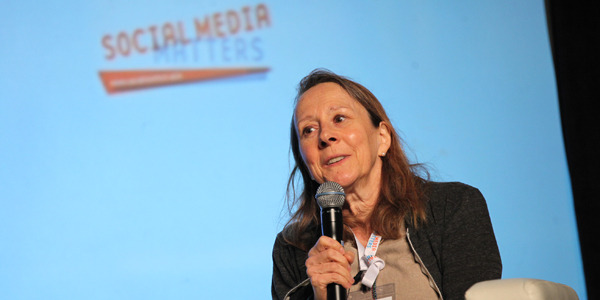 In a panel discussion about how the wave of new platforms will create opportunities in the digital and social arena, investor and digital visionary Esther Dyson pointed out the importance of mobile in this part of the world, calling it a “tool” in the West but something that “represents you through the universe” in Asia. An investor in a number of social media platforms, including Facebook, Linkedin and now fellow panellist Nathan Eagle’s mobile advertising phenomenon Jana, Esther told Localiiz after the discussion about her own social media habits. With more than 44,300 followers, the former journalist said she’s careful not to be “redundant” with her Tweets. “I don’t Tweet about my breakfast”, she laughed. She added that she likes to use social media for the purpose it was intended: Twitter for insights, Facebook for friends and family, Linkedin and email for business. “If you want to give me a business plan, don’t Tweet me,” she said. Esther’s Top Insights - Asia is not a place. It's a collection of different cultures and players. - Social media is bringing a sense of identity that fundamentally changes the power between big business and individuals. - People expect to be listened to, and if you don't listen to them they will talk about you.     Any Brand can be Cool 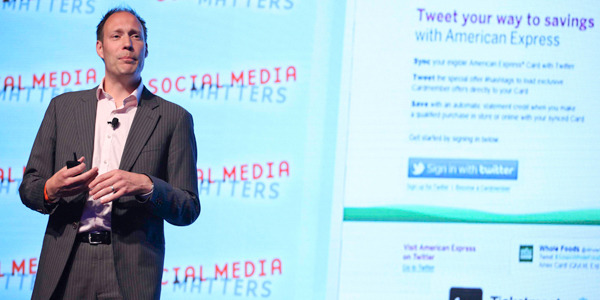 One of the most entertaining presentations of the day came from Carl Barkey, head of social media and customer experience at American Express. Introduced as “The speaker who shouldn’t be here”, Carl proved that even finance companies can make their presence felt on social media.The 163-year-old institution has come a long way since first tentatively dipping its toe into social media scene in 2009 by Tweeting “Welcome to the Twitterverse”, which took then weeks to write, Carl joked. Their most successful campaign to date is probably Unstaged, a scheme that matched musicians with directors to create YouTube concerts sent out to viewers over a live stream. The Kings of Leon offering was the number-five trending topic on Twitter that day, helping to dispel what Carl called Amex’s “stuffy image”. Talking to Localiiz after his presentation, Carl said he thinks the fast-emerging Asian messaging apps will be the next big thing on the social scene, but added that he feels the affluent Linkedin communities have yet to be exploited by marketers. Carl’s Top Insights - Who needs customers when you have friends, fans and followers. - Brands are no longer defined by what they say they are; they're defined by what others say they are.     Don’t Forget about Facebook! And although any discussion about social media must surely include Facebook, head of South East Asia Darin Williams gave the audience nothing less than the hard sell during his SMM moment. And the numbers certainly can’t be sniffed at, as one in every seven people on the planet, which includes babies and the elderly, access the platform at least once a month. Darin said that while Facebook is still super passionate about connecting family and friends, they’re looking to make a big push in business marketing over the coming months. Speaking exclusively to Localiiz, Darin revealed, however, that he still mainly uses the platform for personal reasons. “One of the best things for me is something simple like a birthday, when people from every segment of my life suddenly pop up with birthday wishes. It lets you know that all the energy you put into relationships is still out there bouncing around.” Darin’s Top Insights - Next big thing is going to come on the measurement front. Not Google analytics, but something that closes the gap on what people see on social media and their reaction.     Be Creative Finally, while screaming girls gathered outside the conference hall in anticipation of Bethany Mota’s arrival, Simon Pestridge, VP of marketing for Nike Greater China, came on stage for what he dubbed the “25th session of the Social Media Matters hostage situation”. Despite the long day and weary crowd, Simon’s presentation was arguably the most engaging of all, as he ran through some of Nike’s most innovative social media campaigns using the premise of the perfect dinner party to illustrate his points. For example, 'The Virtuoso' – a well-informed guest who loves changing the conversation – was used to personify Nike’s Find Your Greatness campaign, which challenged China’s obsession with winning by celebrating all the country’s participants in the 2008 Beijing Olympics. It took over the news agenda and became the most talked about social media campaign in China ever. He also used the analogy of 'The Chef' to illustrate the Nike Free iD drive, which allowed We Chat users to send Nike a picture of anything that inspired them and receive back a customised trainer design. Simon stressed that brands should be able to adapt and use any new platform that comes on the scene, adding “We're not In charge of making platforms, but we are here to use them in the best way possible to host that perfect party.” Simon’s Top Insights - You have to know your brand and what you're trying to say. If it doesn't help that, then don't bother. It's just noise. - I won’t talk to my neighbour but I'll take a photo of him sunbathing in his underwear and share it with my friends. Does that make me social?     Be Original 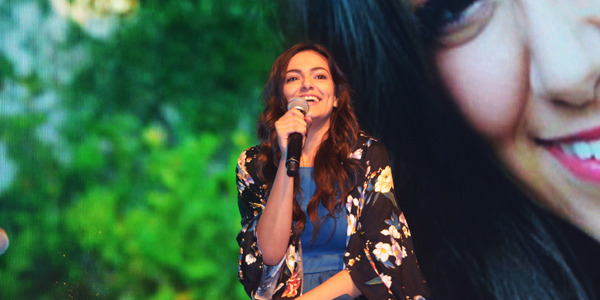 And then the moment came, when all the suits were uprooted from their seats and pushed to the back of the room to make way for 200 teenage girls. These were the lucky ones, as organisers admitted that the 1,600-strong crowd of MacBarbie fans outside the Hyatt was far greater than expected. All chaos broke loose as the 17-year-old YouTube starlet came on stage to be interviewed by TV personality Dominic Lau, with ear-piercing screams prompting a barrage of good natured Tweets from conference-goers about it being time to retire to the bar. Once Bethany’s fans got hold of the hashtag however, little else but “We love you Bethany!” filled up the feed. Although she could hardly get a word in above the shouts from her adoring fans, Bethany, who has more than three million subscribers on YouTube and more than 800,000 followers on Twitter, said all she’s done is be herself. “I make videos about beauty and fashion but at the end of the day, it's about me being me and connecting with people all over the world,” she said. Bethany’s Top Insights - Stay consistent, keep uploading and don't be discouraged. - Never feel pressure to act or look a certain way.     Our Effect Even without such a boost from Bethany, last year’s SMM still attracted plenty of attention, trending against the Obama campaign and the MTV Awards to become one of the most Tweeted hashtags of the day. Determined to do the same or better this year, we and everyone else in attendance were hitting the smart phones like maniacs - and it paid off. By midday, #SMMHK was trending above Syria and the US Open, two very different but undeniably massive topics. By the end of the day, there were 60,000 conversations about the event and 26,000+ interactions.

We certainly learnt a lot at this year’s Social Media Matters, but who knows what will be the hot topics next year!