What Does It All Mean? The Literal Translation of Hong Kong’s MTR Map

By Stasia Fong 15 April 2014
share:
Local blogger Justin Moe gave both Cantonese and non-Cantonese speakers a chuckle last week with his humorous ‘literal’ translation of Hong Kong’s MTR system. Although some of the reworked place names are not technically precise, with Tin Hau transformed into ‘Heavenly Queen’, Lok Fu into ‘Happiness Wealth’ and Tai Wo into ‘Upmost Peace’, no doubt the Tourist Board is taking note! 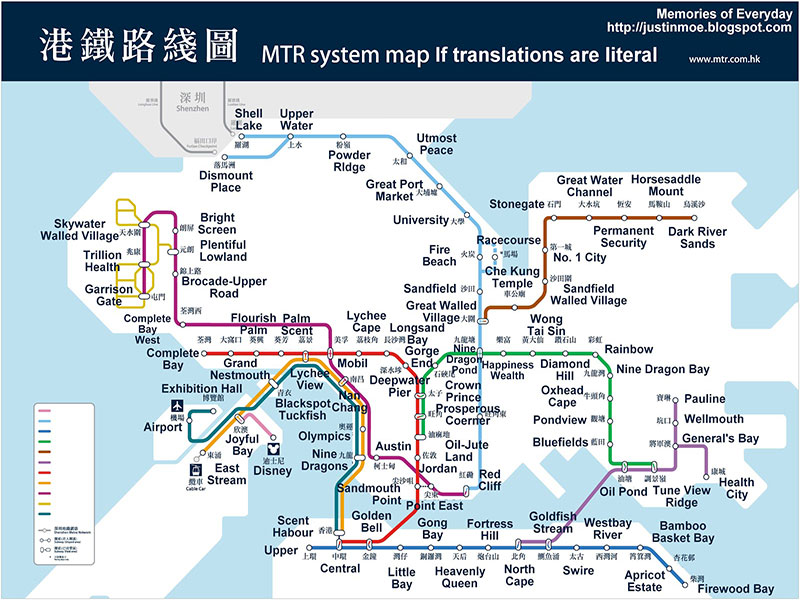 Moe, who says the alternative map took him a lot longer to complete than expected, explained that he put in the work so non-Cantonese speakers “have some idea as to what the MTR map is actually saying to the Chinese speakers”. He continues, “With Cantonese place names in Hong Kong, its English name is simply a phonetic transliteration. As a result you get names that are almost impossible to pronounce correctly without Cantonese knowledge.” Moe had to carry out extensive research for some of the station names where definitions were not so obvious, but managed to come up with clever and imaginative translations for all. Locations that have already been translated from their English counterparts (e.g. Jordan) were left unaltered. While some of the new names are quite appropriate, such as ‘Goldfish Stream’ for the insanely complicated Quarry Bay station, others are quite ironic, such as LOHAS Park being called ‘Health City’ when it is right next to a landfill.

Moe says he amused himself along the way when coming across some “inappropriate/ politically incorrect/ downright vulgar” alternative translations, and teases that there may be another map in the making. Fingers crossed he makes good on that!