May 14th 2013: Albert Einstein once said that only two things are infinite: “the universe and human stupidity”. But while the mysteries of the universe may never be solved, one Hong Kong company thinks it has unlocked the key to increasing intelligence. By Crystal Wilde 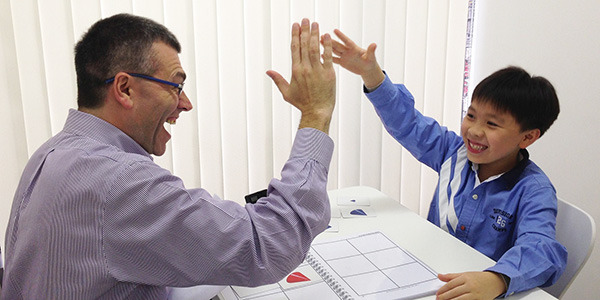 PowerBrain RX provides intensive brain training for Hong Kongers of all ages, from pre-schoolers to seniors. Based on the tried and tested LearningRX programme developed by Wisconsin doctor Ken Gibson in 1985, the PowerBrain RX system uses a combination of one-on-one and digital brain training programmes to strengthen the fundamental cognitive skills of students and improve concentration, processing speed, memory and logic. Although many people believe that IQ is fixed and cannot be changed, the concept of neuroplasticity, whereby the human brain can develop and improve, gained widespread acceptance among neuroscientists and health professionals at the end of the last century. In fact, it has been scientifically proven that with the right training, neural connections inside the brain can be enhanced to stimulate faster and easier learning or restored and re-routed around damaged areas. “When I was a child, my mum told me to work hard, as at the age of 12 it's all fixed and you can’t improve intellectually,” said PowerBrain Hong Kong director Ulysse Würtz. "I now know that’s complete rubbish. The capacity of the brain can change and improve, making learning easier, faster and better. This is not medicine, religion or hocus-pocus; it's an all-natural process harvesting the untapped power of the brain. If you train with us you will get smarter, guaranteed.” The PowerBrain programme has already helped more than 25,000 students across the globe reach their potential, including children with learning difficulties and soldiers returning from war with brain injuries. Dr Gibson himself also became a student of his own programme for the first time last year after suffering a debilitating stroke. “I met Dr Gibson right after his stroke in April last year and found him slow and boring; I wasn’t very impressed,” revealed Ulysse. “But when I saw him six months later after completing the programme he was like a changed man. He told me that he's as sharp minus five percent as he had been his whole life.” The PowerBrain programme differs from traditional tutoring as no academic training is offered. Instead, the focus is on strengthen learning capabilities and improving cognitive functioning. Ulysse, who has undergone the programme himself along with all the PowerBrain teachers, said that brain training is proving particularly popular in Hong Kong. “As adults we learn to compensate for, and make fun of, our weaknesses, but kids fall behind, particularly in a very demanding schooling system like Hong Kong. We had a kid in recently whose working memory doubled in two weeks and his processing speed improved by 30 per cent. He was so proud he put it on Facebook!” With the school holidays approaching, the PowerBrain team is urging parents to stop their kids languishing in front of the TV by signing them up for one of two intensive summer camps. Open to children of all ages, the Smart Summer Discovery is an introductory two-week programme designed to build awareness and strengthen learning capabilities, while Smart Summer Boost is a four-week programme specifically aimed at honing cognitive skills. Those with younger children can also get them off to a flying start with the Smart Kids Take-Off programme, developed specifically for pre-schoolers. To celebrate the launch of their new programmes, PowerBrain RX is offering all Localiiz fans an irresistible Early Bird promotional package until June 30th. For just HK$500, new students can take the PowerBrain RX cognitive skills comprehensive assessment, have a thorough consultation with Ulysse to understand how brain training can help them, and enjoy three complementary one-on-one personalised brain training sessions (valued at HK$ 2000). “We drill, simulate and tease the brain in a very intensive and targeted fashion to make sure our students improve,” said Ulysse. “Our brains can be shaped and improved at any age. It’s a case of use it or lose it!”

To book a session with PowerBrain RX, call 2302 0180 or email via their Localiiz profile page