Under the Skin - Does HK’s Tattoo Trade Need More Regulation?

By priyanka_boghani 25 September 2013
share:
Some call it body art. The less enthused call it a drunken mistake and a scar for life. Differing opinions have done little to dent the growing number of tattoo parlours popping up around Hong Kong, but there are currently no hygiene or certification laws in the city, and literally anyone can set up shop. Before the upcoming International Tattoo Convention on October 4th to the 6th - the first of its kind in the city - we get under the skin of this growing trend and ask if both regulations and awareness need to be increased. 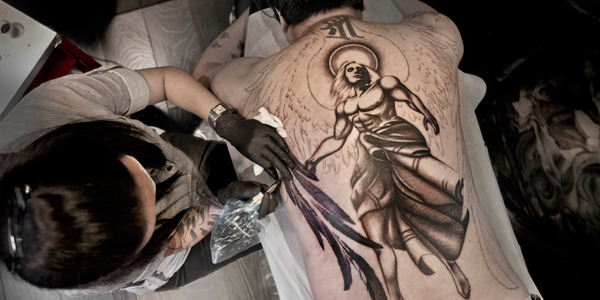 Tattoo Temple's Joey Pang in action
Tattoo and Taboo in Hong Kong Hong Kong has a long and murky history with tattoos. The trend swept in with the sailors after the Second World War when many allied servicemen were stationed in the Fragrant Harbour. The high demand for nautical designs gave rise to a gaggle of tattoo parlours in Wan Chai, a district still known for its attraction to foreign men looking for distractions. In the 60s and 70s, tattoos took on a new bad boy image as they became known for making their mark on triads and gangsters. The dangers, pain and permanence involved seemed to appeal to the all-or-nothing nature of Hong Kong’s criminal world. Today, tattoo culture worldwide has largely evolved from its rebellious echelons into an expression of beautiful body art. Hong Kong’s tattoo scene is also slowly crawling out of the shadows of social stigma. This month marks a particularly significant milestone for the city as it hosts its first International Tattoo Convention, a hotly anticipated showcase of body art, graffiti and local bands. 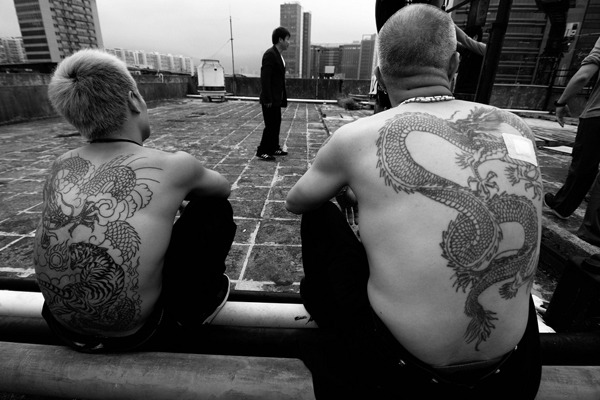 Triad tattoos from Hong Kong short film Somebody to Love
“Thanks to western influences like the American reality show Miami Ink and celebrities, Asians are opening up to the idea of tattoos,” said Joey Pang, owner of Tattoo Temple Hong Kong. “Hong Kong still has a relatively closed culture for tattooing, however. You don’t see many people who want to expose them, but there’s still a growing interest.”     Lack of Laws As of now, Hong Kong enforces only one law relating to the industry - the Tattooing of Young Persons law , first implemented in 1984. It restricts tattooing of anyone under the age of 18, with offenders facing fines of HK$1000 to $5000 and imprisonment for three months. However, independent lawmaker and Civic Party member Audrey Eu also called for more police patrols at local parlours after the subject of underage tattooing fell under the media spotlight. In an interview with the South China Morning Post, the lawyer pointed to the “lack of statistics” on Hong Kong’s tattoo industry and urged the government to educate the public.     Health and Hygiene Age aside, tattooing is also associated with various medical risks, including infections, physical trauma, skin reactions and chemical toxicity. And according to doctors T Ly and S Lee’s review in a Hong Kong medical journal, tattoos can mask existing skin diseases like melanoma if a proper medical examination isn’t carried out. “It’s shocking but there are still no laws to uphold hygiene standards in Hong Kong tattoo parlours,” said Joey, who has been pressuring the government to regulate the industry for years. She stresses the importance of ensuring all needles and inks are sterile to prevent infections and diseases from spreading. 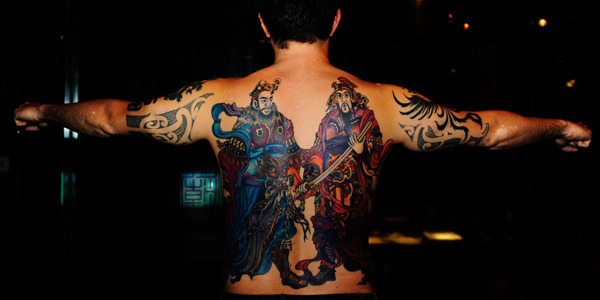 Joey studied design and makeup at school before realising her true calling as a tattooist. Roughly a decade ago, the talented Chinese artist embarked on a tattoo tour of the globe to learn the tricks of the trade, visiting Europe, America and Thailand. When she returned, she opened up Tattoo Temple, a clean and refined parlour that prides itself on its unique designs and acting as a much-needed resource on tattoo related issues. The Tattoo Temple website dedicates an entire section on the importance of hygiene, reassuring potential customers of their high standards and strict policies despite a lack of local regulation. In fact, many Hong Kong tattoo parlours use their websites to pacify their clients’ fears. Freedom Tattoo, another well-known tattoo shop in Hong Kong, has reverted to North American laws due to the absence of governance here. Their website states: “We highly emphasize the importance of sanitation in our shop to make sure the health and safety of our customers, therefore we only use disposable needles and we process professional disinfection equipment. We strictly follow the act of ‘Class B’ a professional health and hygiene standard from North America’s health department.” The Hong Kong Department of Health confirmed that there are no laws specifically relating to tattoo hygiene, but pointed to a set of guidelines giving advice on infection control for skin penetration practice. In the absence of official regulation, Dr Susan Jamieson, who practices at Hong Kong's Holistic Central Medical Practice cautions, “Tattoo are a lot of fun; just make sure that you do your research beforehand and opt for more reputable and established tattoo artists above cheap back alley setups.”

Hong Kong’s tattoo industry has come a long way, but while the city’s inclination towards intricate ink is on the rise, its regulatory framework hasn’t quite caught up. For the industry to fully flourish, surely both must work in tandem.