Surviving the Rat Race – A Holistic Approach to Business 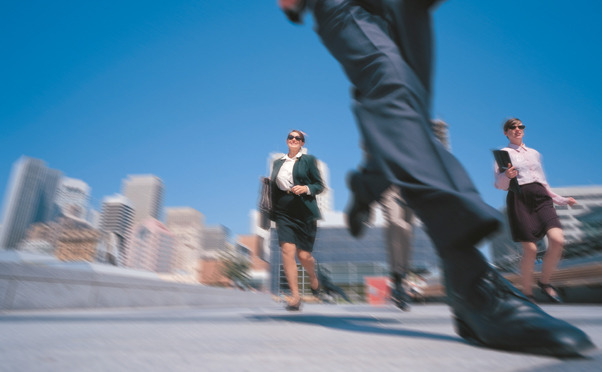 Anyone striving to make their way in the Hong Kong rat race knows the going is tough and that getting ahead requires determination, stamina, composure and resilience. But as these attributes do not come with just an increase of coffee and working hours, more and more Hong Kongers are finding a holistic approach to business is the key to getting ahead. Enter the Shakti Healing Circle, an alternative health centre set up by business people, for business people. If you believe in such things, it would be hard to say it wasn’t pure fate when Reiki-practicing air hostess Pervin Patel met business coach Stephen Clasper on a flight from New York to Hong Kong. As Pervin dished out drinks and busied herself around the aisle, Stephen was struck by a strong sense that this was a woman he “somehow already knew or needed to know”. After slipping her his business card at the end of the flight and making her promise to call, “The rest is history”, Stephen explains. But while Stephen was originally drawn to this humble hostess, Pervin was destined for far greater things than your average trolly dolly. Having known since an early age that she wanted to help others, Indian-born Pervin learnt Reiki and began practicing on her jet-lagged colleagues at Cathay Pacific. She also helped set up and man an anonymous Samaritan-style phone line that allowed cabin crew to confide in confidence. “Growing up, I knew I had a gift. I just wanted to help. I knew I had a purpose,” Pervin smiles. “When I was a kid I used to stand next to people and feel pains, aches and feelings. At the time I didn't realise what that was, but now I know it was them and not me. I tune into that person and I can feel what they're feeling.”

Stephen and Pervin started helping Hong Kongers find a balance in 2007 Pervin’s natural talent for healing is so strong that she can pick up on a client’s ailment as soon as they walk in the door of the Glenealy healing centre, according to Stephen, who has been married to Pervin for 14 years. Since Shakti was set up in 2007, they say they have helped cure Hong Kongers of various problems, ranging in severity from eczema to cancer. “The principle behind Reiki is rebalancing the energy flows in the body,” explains Stephen as I cynically questioned if energy healing can really cure cancer. “With cancer, the cells are unbalanced and attacking each other. It's a case of trying to even out the flow of energy so the cells stop fighting each other and the cancer stops growing.” Stephen stresses, however, that they would never tout Reiki as an out-and-out miracle cure. “We're not here to say ‘don't use conventional medicine’. It's up to the individual to make that choice. Nothing we do here is a cult or a religion, and you don't have to have any belief for it to work. We're not pushing any philosophy; we’re helping people take responsibility for themselves and control of their lives.” Having previously worked as a lawyer, banker and recruiter, Stephen retrained as an executive coach when he realised that high-flying business people seemed to trust him with their concerns. “When I was headhunting I would often have senior bankers who, at the end of the interview, would say they have younger guys wanting their jobs, or they’re feeling burnt out and don't know what to do next. These were people that were trusting me enough to open up and talk about their vulnerability, and it opened my eyes to being able to work with people one-on-one and help them get off the treadmill of a particular way of thinking.” Along with the Reiki and coaching combos, Shakti Healing Circle’s resident and visiting practitioners - some of whom are also former Cathay Pacific employees - provide a whole host of other alternative treatments. Having tried and tested every therapy on offer, Pervin and Stephen are also expertly placed to advise visitors on which of their offerings are the most suitable for their particular needs. And while the corporate world is becoming more conscious of the need to consider workers’ emotional and spiritual health alongside the physical, Pervin and Stephen think more can be done.

“Most of our clients are in the corporate world and say what we do gives them clarity so they make calmer and better decisions,” says Pervin. Only concentrating on the physical is “like taking your car for a service but never changing the battery,” adds Stephen. “It will eventually break down if you don't address the underlying cause.”