“Stand By You” Brings the World’s Support to Hong Kong

By Localiiz 2 October 2014
share:
October 2nd 2014 by Brian Adams The wall is lit up with a message from the United States: “Even miracles take a little time. Have a little hope and stay firm!” 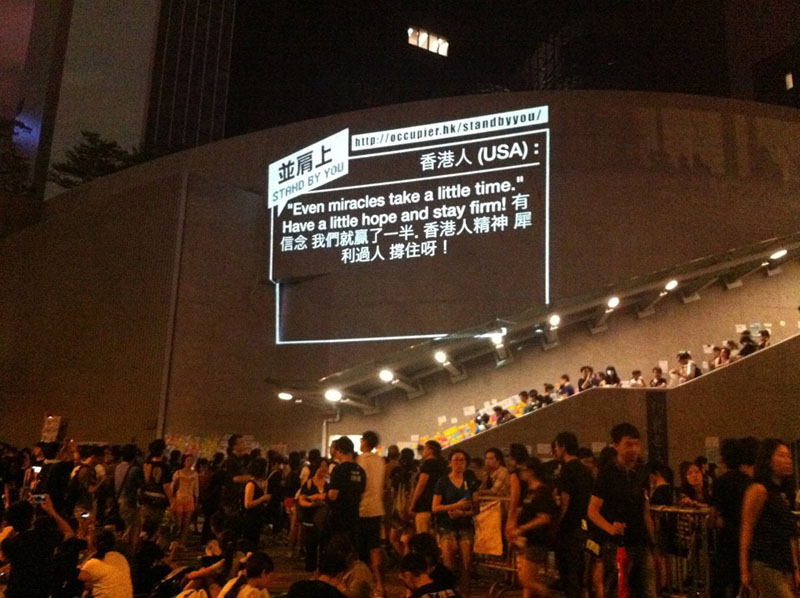 The words of support are one of more than 20,000 messages sent from Occupy Central supporters around the globe through a platform called ‘Stand By You’. ‘Stand By You’ is the brainchild of a group of Hong Kong artists including Sampson Wong, Jason Lam, Chris Cheung, and Kitty Ho among others. First conceptualized in August, ahead of the predicted October launch of Occupy Central, the messaging platform was developed to provide support to demonstrators who might be on the streets for several days. When Occupy Central moved up its official launch date to earlier this week, the team behind ‘Stand By You’ quickly tested the system for two days before opening it up for a worldwide audience yesterday and projecting messages on the wall outside of Hong Kong’s government headquarters. The concept is rather simple: allow anyone around the world to type a message of support to the demonstrators and then project that message onto a wall. In reality, the effect of such a platform is as complicated as human emotions, allowing people from anywhere in the world to lift the spirits of demonstrators enduring thunderstorm filled nights and days of punishing heat and humidity. Lesley Cheung, the manager behind ‘Stand By You’, says “the machine may look like any apolitical communication device, but empowering protesters on-site is indeed the most political purpose.” Even the name of the machine was carefully selected according to Cheung. "並肩上, literally ‘hand in hand’ or ‘stand by you’, is taken from a line in a Hong Kong protest song against the June Fourth Incident in China. The line ‘無法與君一起並肩上’ means ‘I am unable to come with you’, so the machine name explains our objective of bringing to the actual scene the words of those who cannot support the democratic movement in person.”

To add a message, someone must only visit the website and input their name and words of support. Most of the messages are coming from Hong Kong residents, with others from as far away as the United States and many countries in Europe. Some, according to Cheung, were even sent from mainland China, “which was really encouraging as the Chinese government has heavy-handedly censored all news about Hong Kong's umbrella revolution these days, and they must have taken great pains to break technical barriers and read about the recent events.” The response, Cheung says, has been overwhelming. More than 20,000 messages have been received since the Facebook site launched on September 26. You can see an archive of them here. The site has also been hacked once, a sure sign that it is gaining attention. The staff, including Cheung, are busy loading new messages and not immune to the emotions being shared. “We, the organisers and administrators, are all moved by the support and encouragement people give. Immeasurable thanks goes to the people in and beyond Hong Kong who are closely watching and supporting our movement, as well as impeccable technicians who basically built up everything from conception to the actual products.” Visit the ‘Stand By You’ website to publish your own message.

To submit your photos to Localiiz, please email them to [email protected] or tag your photos #localiiz in your social media feeds.