By crystal_wilde 23 May 2014
share:
If you’re a fan of #followmeto on Instagram, you’ll no doubt have fantasied about mocking up your own homage to the runaway success series. But now there’s no need for imitations, as the world’s most romantic and well-travelled couple invites fans to join them for an en masse Follow Me photo at Hong Kong’s Habour City this Saturday (May 24th). 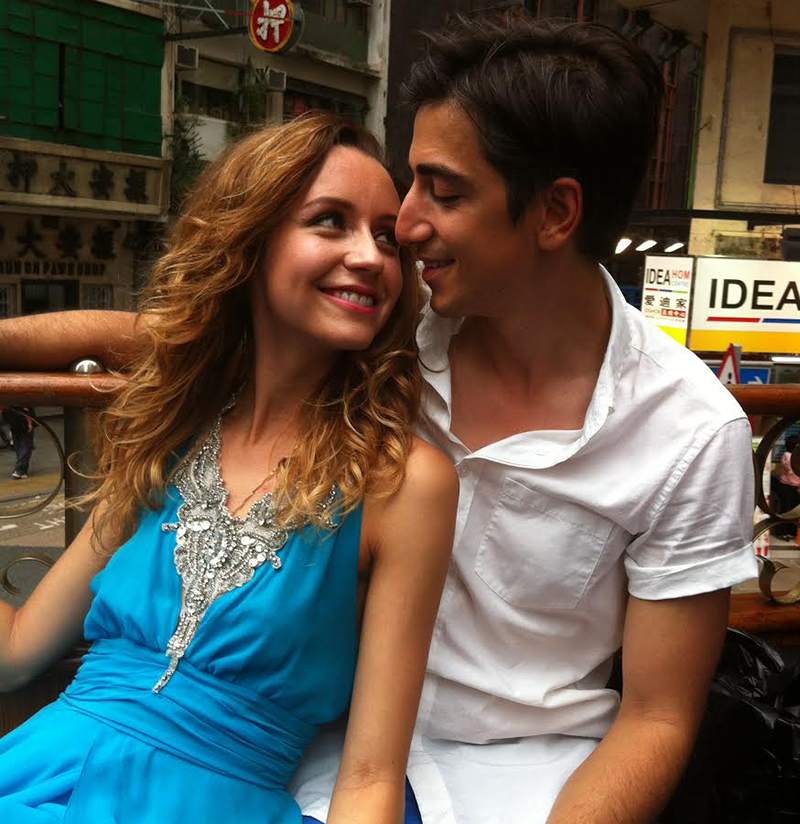 Russian sweethearts Nataly Zakharova and Murad Osmann achieved world-wide fame without ever showing their faces. Taking photographs in some of the world’s most exotic and recognisable locations in their Follow Me series, the enchanting woman seen only from behind and the outstretched hand of her trailing companion captured the hearts of Instagrammers across the globe. Having already graced Hong Kong with their presence once before, the couple are now back at special invitation of the Hong Kong Tourism Board. Since arriving in the city on Monday, they’ve been busy setting up their signature snaps on junk boats, at The Peak and at the Big Buddha, but still have a whole host of inner city and outer island locations on their itinerary. 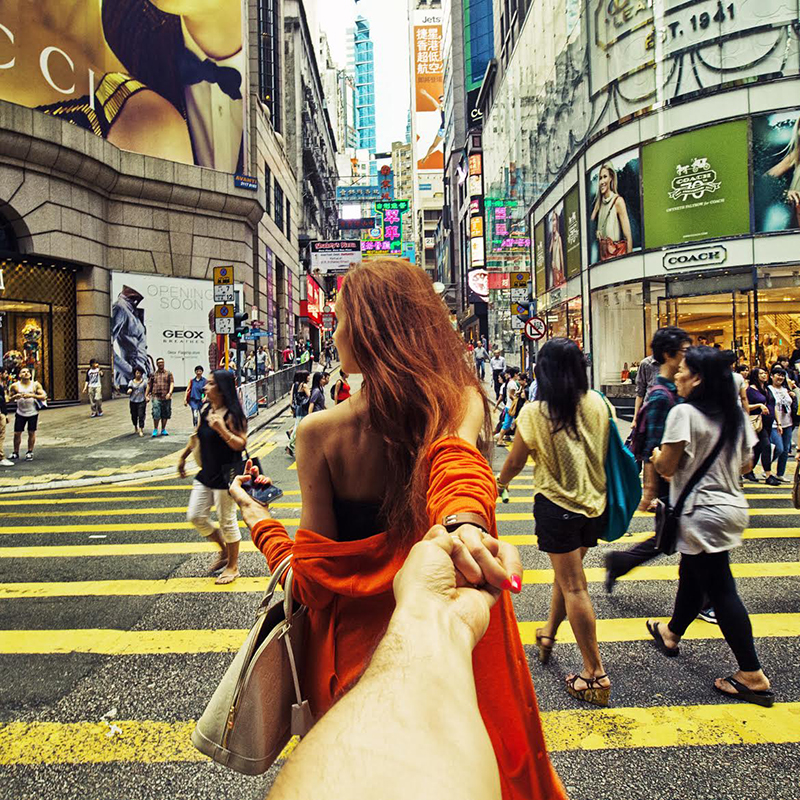 On their last Hong Kong visit

We caught up with the couple during a media photo shoot atop one of Hong Kong’s open air vintage trams. Explaining that this time they want to visit some of the territory’s little-known secrets as well as its main tourist sites, Nataly - who is just as beautiful from every angle as she is from behind - said, “There are so many wars, and so many bad things happening in the world, we just want to show something good and tell people about love and beautiful places.” The first Follow Me photo was taken while the couple were on holiday in Barcelona in 2011. Annoyed by Murad’s refusal to look anywhere but his camera lens, Nataly grabbed him by the hand and dragged him in her direction. Although it did little to take his finger off the shutter button, it certainly got Nataly more attention, as from that moment she became the focal point of a beautiful project of ever-growing proportions. 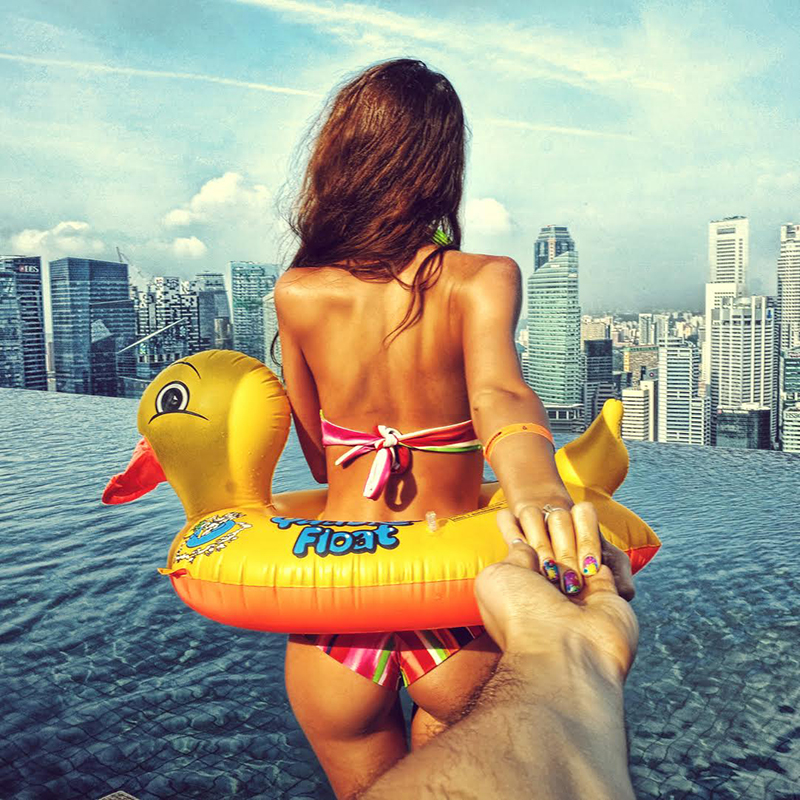 Sporting everything from tracksuits to teeny-weeny bikinis and elaborate backless ball gowns, the glamorous journalist has now led Murad to dozens of enviable locations, from Monaco to Miami, Singapore to Istanbul, and everywhere in between. When asked if he was surprised by the success of the series, Murad told Localiiz, “It’s a passion project for us. We didn’t expect it to have such a huge viral effect and we actually don’t know why it happened, but we’re really happy about it.” 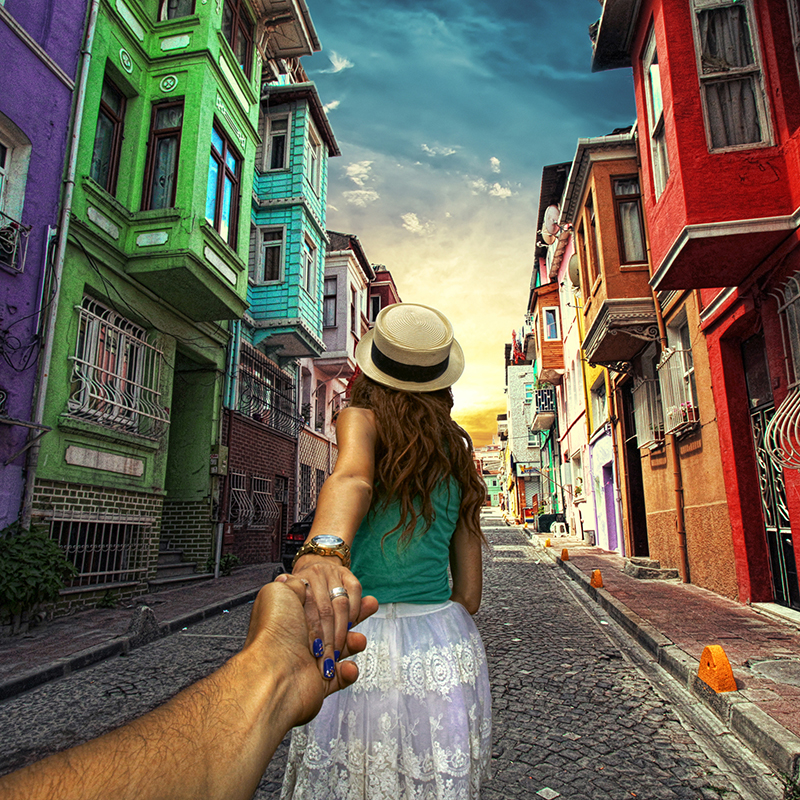 If you want to see this loved-up couple in real life, they’ll be hosting a special meet and greet with fans at Harbour City’s Ocean Terminal car park at 3pm this Saturday, May 24th. Come along, see the romance up close, and become part of the project with a huge #followmeto and #discoverhongkong group selfie. Check back on Localiiz next week to see photos from their trip.

Pandamonia in Hong Kong: Must their Future be Black & White? May 22nd 2014: In less than three weeks’ time, Hong Kong will receive a mass Mainland invasion with a difference, as 1,600 paper-mache pandas march on the city. Part of the Pandas World Tour, this black and white brigade will sniff out their final stop at Soho’s PMQ, but not before a whirlwind tour of the city’s most famous landmarks.

From Station to Station: Couple Take Adorable Photographs at Every MTR Stop May 21st 2014: Hong Kongers sure love the MTR! Last year, Tim Littlechild and Chantal Shafie of RTHK's Something For the Weekend broke a Guinness World Record during their epic one-day MTR Challenge, visiting all 83 stations in eight hours and 18 minutes. Just today, we came across a whole new MTR marathon...

Star Gazing – Photographer Brings Out the Beauty of Hong Kong’s Night Sky May 21st 2014: We’re lucky to have an abundance of talented photographers in Hong Kong, but for reasons of light pollution and the ever-present smog, not many train their lenses any higher than the top of the ICC. Not so however for astronomy enthusiast and multi-media creator Mew Chu.

Human Nature - Michael Wolf is Back at it Again with 'Hong Kong Flora' May 13th 2014: When we last checked in with prolific Hong Kong photographer Michael Wolf, we dove straight into exploring his project Hong Kong Trilogy, the first of his intended series of nine books on the city's vernacular culture. To coincide with the launch of this month's Chai Wan Mei Festival, Wolf has released the latest offering, Hong Kong Flora.
To read more amazing articles on all things Hong Kong Click Here>