Feeling The Speed With The Sideways Experience 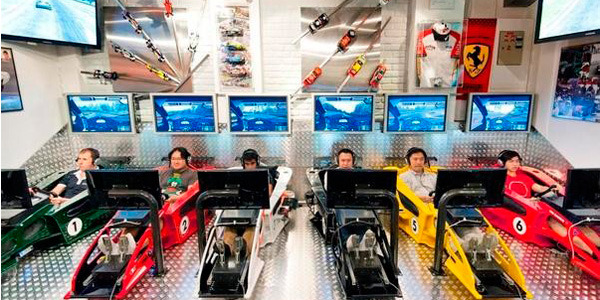 It was headphones on, eyes locked and feet down as Localiiz speed demons took Formula 1 race cars for a spin this week. The Localiiz team and selected Hong Kong businesses were invited to burn some rubber at Sideways – the city’s pole-position motorized sports centre, home to 15 networked simulator cars that can take petrol heads racing on any track around the world. Founded in 2004, Sideways in Chancery Lane, Central, offers the real race experience, with heavy-duty gear shifters, real-feel steering and breaking, and a choice of rides that ranges from BMW Minis to Formula 1 racing cars. But as you can kerb-hop, wheel bang, doughnut and crash without anything more painful than a dent in your lap time, Sideways is also the only place in Hong Kong where drinking and driving is encouraged! Speaking about his Sideways experience, Phil Murphy from Pyjama Events said, "A most enjoyable evening - I met up with some old faces I'd not seen for a while, made some good new contacts and legally drunk, drove and smashed up a Porsche." The Sideway’s setup is all-encompassing, allowing drivers to compete in long-distance races, sprints and night drives all in one evening while the action from each cockpit is broadcast live onto the surrounding plasma screens. Nick Swanson, who changed lanes from customer to director of Sideways three years ago, explained why he took armchair enthusiasm to the extreme. “I was a regular client here for about six years and became good friends with the former owner. When he said he was leaving, I instantly jumped into the driver’s seat,” said Nick. “I got addicted to it very quickly. Real racing in a real race car costs a hell of a lot of money and not everyone has that kind of cash. Racing the sims is also way better than PlayStation, as you can come with your friends, have a drink, a laugh and a proper social time.” Nick normally starts newbies in automatic mode, but the sims can be programmed to be just as complicated as real race cars, so much so that the world’s top drivers, including Lewis Hamilton, David Coulthard and Felipe Massa, often use them for training. And while Sideways can’t claim to have hosted such racing royalty, the club has become a pit-stop for many pros. “Matthew Marsh, [Formula 1 commentator and Porsche Carrera Cup Asia Champion 2004] comes in here pretty regularly and says that if you drive a sim like the real car it responds in the same way,” Nick told us. “It teaches you what corners are coming up and approximate gearing and breaking points. He did the Sebring track just a second faster at Sideways than he did in Florida. "We also often see Hong Kong’s Darryl Young and Dan Wells, and we get a lot of local drivers who want to race Macau, so they come in and learn the track before going there and smashing up their Ferraris.” Sideways also hosts a lot of group sessions, from corporate ice-breakers to hen parties, and puts on a Formula 1 night every race weekend with two-for-one drive time, free pizza and a leader board competition where wannabe racers test their skills on the same track as the pros.

But no matter who gets into the driving seat, Nick, who travels with the sims to events all over the world, claims traditional stereotypes apply.“You can pick the different nationalities out by the way they drive,” said Aussie Nick. “The Australian and Kiwis are very good straight away, the Brits are okay, the French take short cuts and the Germans are super serious.”