Most modern women would claim they suffer for beauty, whether it be wearing high heels, plucking eyebrows, waxing, or undergoing Botox or plastic surgery. But few can truly claim to have endured like generation-upon-generation of Chinese women, forced to walk on broken feet their whole lives in order to secure a good husband. BOUND is a new exhibition which shares the stories of the last surviving women of China who endured the outlawed tradition of foot binding (also known as 'lotus feet') which left many crippled for life. Through a collection of black and white analogue photographs, never seen before x-rays, foot prints, and related objects belonging to her subjects, Farrell dares to break the taboo surrounding this dwindling tradition and record the lives of those who suffered before their stories of immense pain and perseverance die with them. Her debut exhibition, which opens at the Hong Kong Museum of Medical Sciences on March 18, concludes an eight-year project, which began as a Kickstarter campaign in 2005, and went viral in 2014 when Farrell shared images of more than 50 elderly women who she tracked down and photographed in rural villages in the Yunnan and Shandong provinces. Only now will Hong Kongers have a chance to glimpse into this harrowing aspect of Chinese history before it is lost forever.

Dating back to the Song Dynasty, the tradition of foot binding was the Chinese custom of applying painfully tight binding to the feet of young girls to prevent further growth, resulting in drastically altering the bone structure of the feet to reach a target petiteness.

The process was usually initiated for girls between the ages of 7 to 15 years old, when the arches were still developing. Toes were curled under the sole, bound, and forced downwards with great pressure until they broke, while the heel was bound towards the ball to form the desirable lotus shape. 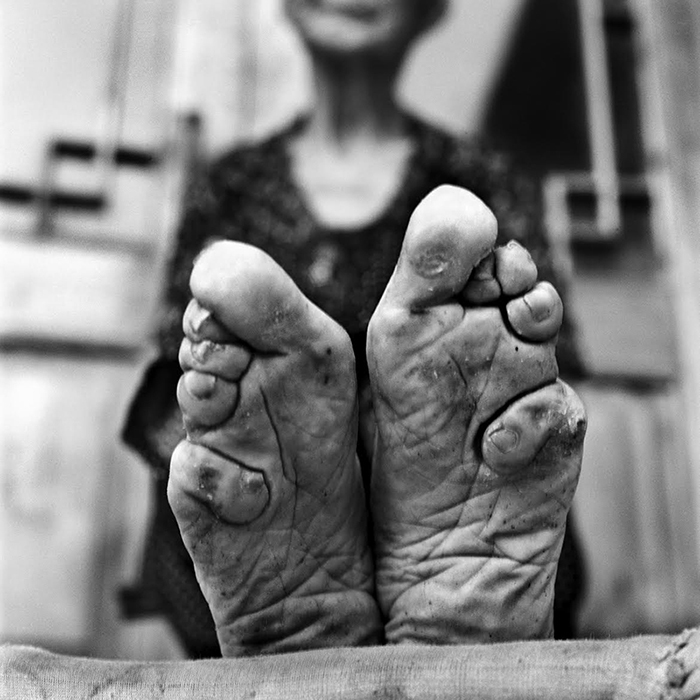 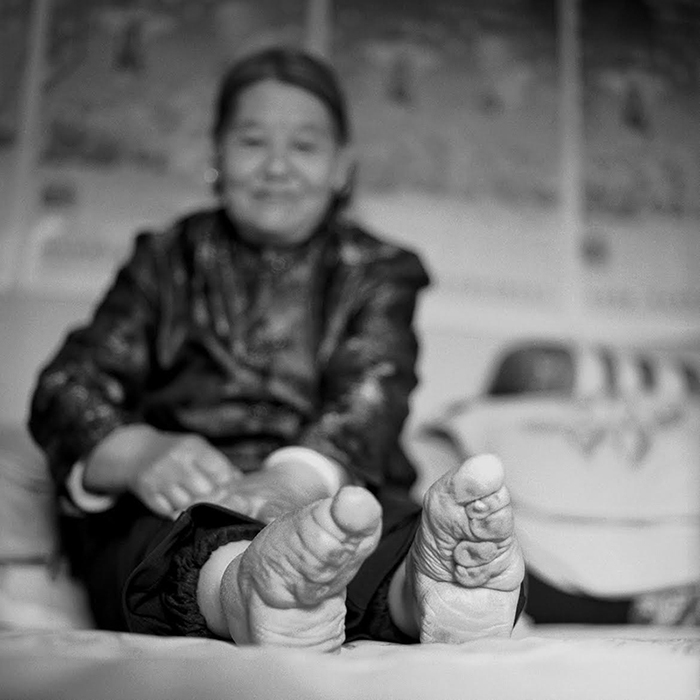 Having evaded various attempts to ban it since 1664, the practice, often dubbed "barbaric", only started to die out completely when it was forcibly stopped by the Government in 1939. While some books and films explore the stories of elite women whose feet were bound as an expression of beauty, Farrell claims that the peasant girls, whose families insisted on them undergoing the procedure in the hope of marrying them up the class ladder, have so far been silent to the world. "Most of the books are about beautiful embroidered shoes and the erotica of foot binding, but none of them really tell the stories of these poorer women,” explains Farrell, who says her subjects are like her own “little grandmothers”.

Compelled to break the silence and give a voice to the many women left crippled by this dwindling tradition, Farrell began her journey across remote villages in China with her trusty 503C Hasselblad and only black and white film to find the women still carrying the scars. Relying on pure luck, networking, and persuasion, she succeeded in finding 50 women, some more than 100 years old, and developed friendships that go beyond language, culture, and age, purely based on mutual respect. This is clearly reflected in her collection of beautiful, close-up portraits of the women and photographs of their modified feet and home surroundings.

The portraits are humanising, demonstrating Farrell’s ability to work with her subjects and ultimately to be moved and changed by the process. “I want to celebrate these women's lives", she explains. "They've been through so much - bound feet, famine, cultural revolution. Most are now in their 80s and 90s and it's getting difficult for them to remember, while several have passed away since I first met them. I want to make a record of these women before it’s too late, so future generations can see who they were and what their lives were like.” Don't miss your chance to see them yourself at the Hong Kong Museum of Medical Sciences from 18 March to 31 March.