Salt and Steel: What it Takes to Sail Solo Around the World

By priyanka_boghani 29 August 2013
share:
He spent 36 hours stitching up a ripped sail in the most remote place on Earth, slept through his alarm while navigating a dangerously narrow channel near the Canary Islands, and knocked himself unconscious while completely alone on the high seas. At the age of 36, Chris Stanmore-Major has already survived two perilous round-the-world sailing stints, but has no plans of putting up his sea legs just yet. The fearless seafarer talks to Localiiz about the places he’s dropped anchor and the next momentous landmarks plotted on his course. 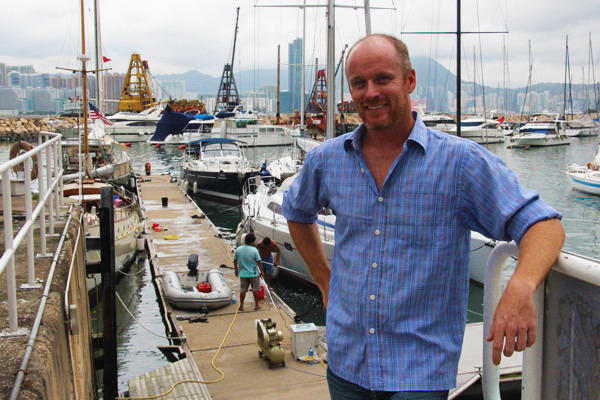 “By the time I’m 40 years old, I hope to have done four trips around the globe. By my count, I’ll have passed 230,000 miles, which is the distance from here to the moon,” says Chris. The British national, who captains pleasure trips for Hong Kong Yachting when in the city, has an exciting few years ahead. In November he will partner with Canadian ocean racer Derek Hatfield in the 2013 Transat-Jacques-Vabre race from South America to Europe, a mere trifle compared to the non-stop Barcelona World Race he plans for 2014. Even that, however, pales into insignificance when compared to the end goal - the 2016 Vendee Globe. Known as the “Everest of Sailing”, the singled-handed, non-stop, no-assistance world race has only ever been completed by 80 people. But if anyone can do it, Chris can.     Making Waves Chris first found his love for sailing while volunteering for Hong Kong’s Outward Bound School correctional service, teaching troubled kids self-reliance and responsibility on the seas. After a few years learning the ropes, he set sail on his first round-the-world voyage with Clipper Ventures, a UK company that runs world yacht races. It was a big leap for Chris, from pootling around the quaint bays of Hong Kong to captaining a 21-member crew completely new to sailing. Chris however showed great steel and stamina on the nine-month expedition, steering his band of former land lovers on an exhilarating pit-stop tour of 14 countries across the world. Shortly after his return, Chris was approached by Sir Robin Knox Johnson - the first man to sail solo non-stop around the world - who invited Chris to follow in his mighty footsteps and single-handedly man his super-fast Open 60 yacht, Spartan, in the 2010 Velux 5 Oceans race. “The thought of sailing on my own was absolutely petrifying,” said Chris. However, the young sailor came second in the last leg of the race, and his dogged determination resulted in the closest finish in solo racing history. He was a mere 40 seconds short of snagging the first place trophy. Throughout the journey, Chris blogged for British newspaper The Independent, penning up to 90,000 words and shooting and editing his own videos. “This was where my Linguistics and English degree came in handy,” he joked. Chris’s memories of sailing around the world alone for the first time are still salty fresh. Tackling high waves, drastic temperatures and a chilling sense of loneliness, Chris says it was one of the most mentally and physically challenging experiences of his life. “I slept in 20 minute intervals because thinking you’re going to die is a very good alarm clock,” said Chris, who became the 182nd person to sail solo around the world after completing the Velux 5 feat.     Hardships on the High Seas However, for Chris, it was the challenge of overcoming a raft of problems alone that proved the most rewarding part of solo sailing. One of the most daunting experiences he’s had on deck was when his mast sail ripped at Point Nemo, the most remote place in the world. With no-one around to lend a hand, he spent 36 hours straight stitching the huge hole. Chris was sleep-deprived and facing freezing temperatures and huge winds, yet he struggled through and got the job done. “You put one stitch in, have a cigarette, drink coffee and pop in a few Haribo candies and then you do another, and before you know it you’ve just done an overnight job,” recalls Chris, still incredulous at the memory of his epic mission. “I remember thinking, if I die, I’ll know I’ve gone to hell if someone passes me a needle, thread and a big orange waterproof suit and says ‘welcome back!’” 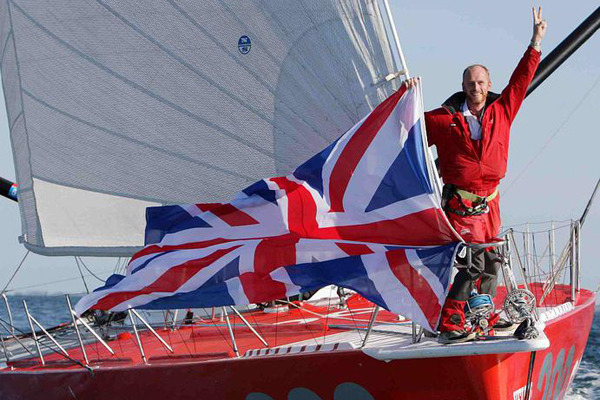 A jubilant Chris after completing the Velux 5 Oceans race Along with dealing with the emotionally crippling concept of being completely out of touch with those he loves, Chris was also forced to become completely self-reliant. “Once I fell down the steps into my cabin and I woke up realising that I had no idea how long I had been unconscious for,” he recalls. “Another time I didn’t set my alarm clock properly and I overslept while navigating the Spartan down a narrow channel near the Canary Islands. Luckily I had lined up the boat, but if there had been a change in wind, I would’ve driven straight up a beach, injuring myself and smashing up the boat completely.” However, his most adrenaline-packed experience was when rounding the Cape Horn alone in the Open 60 - something he dramatically described as the “Cape Crusade” in this blog. Located at the most extreme southern tip of Chile, the Cape Horn is known as one of the most dangerous bodies of water in the world. Those who have braved it say battling the roaring winds and savage seas in the abyss of South America literally feels like sailing along the edge of the world, as the sudden plateau of the exceptionally shallow bank creates phenomenal waves. “With the Horn and the massive weather system, it was like I was stuck between two hands clapping,” said Chris. “It was dark and cold when I approached this terrible cauldron. At the time, I didn’t care about anything else. All I could think about was getting through this.” As he guided Spartan to safety, Chris remembers the wind suddenly dying near the Andes Mountains, allowing him to bust out into the calm. “That moment I saw the lighthouse blinking at Cape Horn gave me the biggest relief,” he said, still heaving at the memory.     Experience it for Yourself Chris is asking local Hong Kong institutions and individuals to help sponsorship his next raft of races. For just US$100, you can put yourself forward for the chance to win one of four amazing sailing experiences, ranging in intensity from enjoying an on-board breakfast on Transat-Jacques-Vabre race day, to joining the Open 60 crew on a seven-day voyage as they complete their transatlantic deliveries from Nova Scotia to Europe this winter. Odds are pretty good as entrants are limited to 222 per prize, but even those who don’t win will have the honour of getting their name printed on the hull of Chris’s boat as he navigates around the globe. “Anyone who helps us with a little donation is coming with us on our journey, in some way,” said Chris, who has raised just over US$90,000 so far. To help Chris on his mission to conquer the world yet again, enter the competition or donate here.