Outside the Ring with Hong Kong’s Wonder Kid

By brian_adams 12 November 2014
share:
When I first meet Hong Kong’s Rex Tso he holds my hand in both of his, bows his head, and thanks me for speaking with him, all with the broadest of smiles. He’s incredibly still for a man known for throwing the lightening quick combinations that earned him an undefeated record over 14 fights, including nine knockouts. 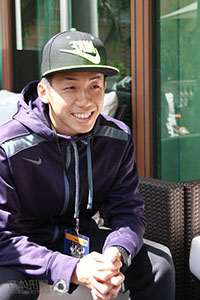 At 5’7” and 130 pounds, Tso is slight, hunched when he sits, folding in on himself with humbleness. His leggings seem one size too big, bagging out from under his trunks. The grey fitted tank top only accentuates his thin frame, and even his moniker, The Wonder Kid, is slightly misleading for the 27-year-old professional boxer. On November 23rd, Tso will return to The Venetian Macau for Clash in Cotai II to square off against Japan’s Tatsuya Fukuhara in an undercard match leading up to the Manny Pacquiao bout with Chris Algieri. Tso’s been training hard for the match, sticking to a routine that starts each day at 5am with a 10 kilometre run from Causeway Bay to Sheung Wan before taking a quick nap followed by a full day in the gym, conditioning and working on his technique. Under the watchful eye of a dietician, Tso will drop roughly 15 pounds the week of the fight, subsisting on apples and salad ahead of the crucial weigh-in. “What I really look forward to the most is making all of my work in the past few months come out in the fight,” Tso told Localiiz in between workouts. “That’s more important than a win.” Tso’s star has been rising, with locals hoping he will bring a world champion title to Hong Kong for the first time. The grassroots support, he said, drives him to put on a better show each time he steps into the ring. Coming from a family of boxers, Tso may have been destined to put on gloves and earn a living in the ring, but that wasn’t always his intention. “In the beginning I really didn’t like it very much.” But after a few workouts with his family, it wasn’t long before his talent was spotted and he was on his way to a professional career. He has since crafted his own style that he describes as aggressive with incredible hand speed. His next fight marks almost a year to the day when he defeated Thai fighter Susu Sithjadeang at the first Clash in Cotai, another undercard fight headlined by Pacquiao. “It’s a huge privilege to be associated with such a huge talent, a world class boxer, and a classy gentleman,” Tso said of Pacquiao. “Even just being near him or sparring a couple of rounds, I can learn so much.” For future boxers he advises against just looking at the hands or the power of a knockout. “If you want to become a pro boxer, you need to understand the sport first, inside and out. It’s not just about punching. It’s the whole thing. There’s no screwing around. You have to give it your all. No half measures.” This is the only time during our talk when Tso loses his trademark smile, showing the years of punishing training in his eyes. The interview ends much like it began, Tso cradles my hand in his wrapped palms, he smiles, bows, and wishes me well. He turns and makes his way across the gym for his workout. As he walks towards the ring his posture stiffens, until he ducks under the ropes and immediately his feet and hands go to work. Don't miss out on the fight of the year! Click here for Clash in Cotai II ticket information and sales. Got anything you'd like Localiiz to share? Send us your stuff!