By Localiiz 17 September 2013
share:
September 18 2013 By Priyanka Boghani On a Sunday morning, Hong Kong’s southern seas are alive with all sorts of nautical activity. There are day junks teeming with sunburnt revelers, keen wake-boarders and jet skiers riding the waves, and sailboats gracefully gliding through the water. However, look closer and you’ll see a line of red buoys dotted along the coast, venturing out past the shark nets into choppy waves and unexpected currents. This is the domain of Hong Kong’s open water swimmers, a group of fit and fierce amateur athletes who prefer the dangers of the open ocean to the pleasantries of the pool. 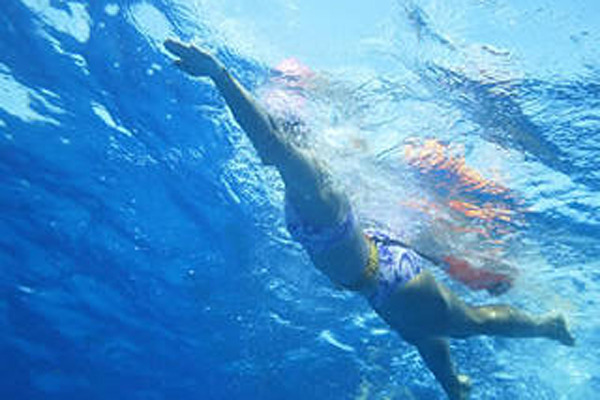 Come hell, high water or hangover, every Sunday at 9am Kirk Robinson and Ian Polson meet a team of determined swimmers on the sandy shores of Repulse Bay beach. Ian, the founding father of the Open Water Swimmers Hong Kong group, briefs everyone on the route and the safety precautions before they all jump in for a lengthy 4-5km swim in the "big pool".     Making a Splash Both former triathletes, Kirk and Ian are part of a growing community in Hong Kong to shun urban pools in favour of an intensive open water workout in the southern seas. Since its founding by Ian in 2007, the Open Water Swimmers Hong Kong group has grown from one to almost 300 members. “With the Olympics introducing a grueling 10km open water swim in 2008 and the Hong Kong government bringing back the cross harbour swim, people are now getting into open water swimming,” said Kirk, a 46-year-old Australian property developer who joined the group three years ago when he moved to Hong Kong. “Hong Kong is a fantastic place to swim. After all, it’s an island and the water is so accessible here,” he added.     Why Swim in the Sea? According to Ian, seawater has been running in his veins since he was old enough to doggy paddle. When the 68-year-old barrister moved from Adelaide to Hong Kong to pursue a career in law in 1971, he brought his love for the water with him. He swam across Hong Kong’s Victoria harbour in 1975 and completed the Iron Man in Hawaii in 1982, becoming Hong Kong’s first Iron Man triathlete. It was during his training for this mammoth challenge that he realised that there was no real community for open water swimming in the city. 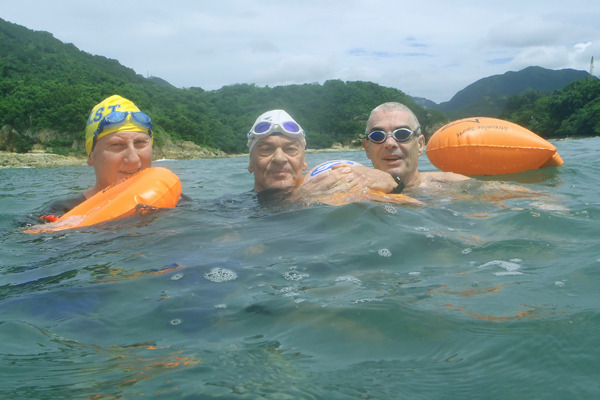 Ian (centre) and fellow Open Water Swimmers in the big blue
“I’ve been swimming all my life but I grew tired of swimming up and down in a pool,” said Ian. “When I’m out in the open, it’s just me and the sea and it constantly challenges me to improve my strokes. It’s also so motivating to be swimming in a group.”     Keeping Afloat While High 5 Streamline Sports provides the Open Water Swimmers with basic equipment such as bottles, swimming caps and red buoys that are pertinent for safe open sea swimming, the group prides itself on being non-commercial and independent, stressing that it’s the love of the sport that keeps them afloat. High 5 Streamline Sports is a sister company of Harry Wright International, who have trained many of the group's swimmers, including Olympic medalist Hannah Wilson. “After a long swim, everyone has these big, bright smiles on their faces and that’s enough reason for them to keep coming back,” said Ian, who also welcomes drop-ins swimmers just in town for business. For Kirk, open water swimming is as much a psychological journey as it is physical. “After I’ve covered a long distance, my mind starts to drift. All I’m listening to is my breathing and the sound of my hand hitting the water. It’s almost Zen-like and very liberating,” reveals Kirk. He particularly enjoys the breathtaking views as Hong Kong’s rugged landscape rolls by. When asked if he is concerned about shark attacks, Kirk said, “Not at all! I’ve never seen a shark in Hong Kong but I do run into the occasional dead fish or sea snake.” Ian adds that the most unusual thing he’s seen on his swim is a woman’s high-heeled shoe floating by, which made him wonder where the other one was. Both swimmers agree that one of the charms of open water swimming is that every swim is different. “It’s the final frontier for extreme sports,” said Kirk.     Dive In The group invites swimmers of an intermediate fitness levels to come together for free each week. On average, about 40 swimmers ranging in age from 17 to 70 turn up. 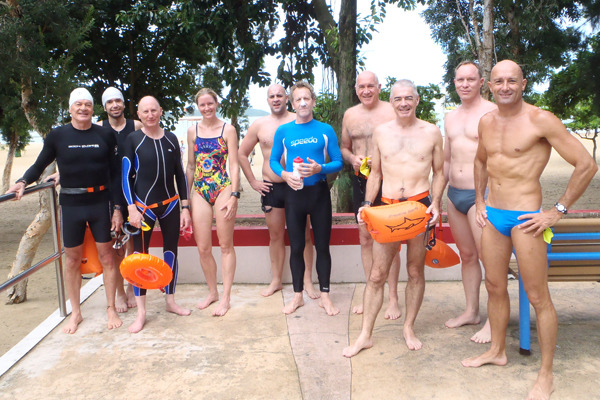