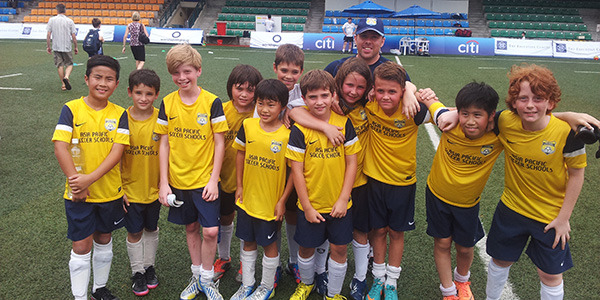 Two Localiiz soccer schools are set to play among the big boys at Hong Kong Football Club this weekend after putting in impressive performances at the HKFC Citibank Junior Soccer Sevens. Brasil Top Skills Soccer School from Ho Man Tin will take on Kitchee Sports Club in the U13 Plate final on Saturday, while Mong Kok’s Asia Pacific Soccer Schools’ U10s will meet the Tai Tam Tigers in the Cup final on Sunday. Despite the hot and humid conditions last weekend, 16 junior clubs from across Hong Kong delivered 20 hours of sizzling soccer to mark the start of the Sevens tournament. This year saw local First Division club Kitchee field their young stars against sides from a variety of soccer schools, as well as two city school sides - Canadian International School and Tai Tam Tigers from Hong Kong International School. Paul Smith from Asia Pacific Soccer Schools (APSS) said their youngsters did them proud, with the U11 and U13 teams both winning a Shield, and the U10s earning a place Sunday’s the Cup final. “It was a roasting Bank Holiday weekend so quite a few kids were missing, but the tournament was well attended and our kids played really well, despite struggling with the heat,” said Paul. The APSS currently trains around 80 youngsters in Hong Kong and previously helped hone the skills of bothers Dylan and Taylor Tombides, who now play for West Ham United. Starting out with children as young as two who raise up through the ranks of their Kinder Kicks programme, APSS sends its brightest stars to the Asia Pacific Football Academy in New Zealand, a Chelsea FC affiliated programme that allows youngsters to train every day while continuing with their studies. “When we get a very talented player it's often obvious from day-one,” said Paul, “but having said that, we also get players who start out in the second team, train hard and end up as some of our best. You can really tell talent at 13 and 14, but starting late doesn’t really matter as long as you train hard.” Brasil Top Skills Soccer School is the only football club in Hong Kong coaching players in “Brazilian style” play. The coaches here are all former professional Brazilian players with a wealth of experience playing soccer all over the world. Speaking about their U13 team reaching Saturday’s plate final, Brasil Top Skills Soccer School owner Eder Ferreira said, “It was so hot last weekend that by the semi-final, most of the kids could hardly run any more. They did very well though and it's just such a great opportunity for them to learn about football and have some fun. “Everyone’s very excited about playing this weekend, but we tell our kids that winning is not so important. Obviously it’s good to win, but the important thing is to work hard so if you do lose you know you tried your best.” The junior tournament also saw hosts HKFC welcome rivals from Kowloon Cricket Club, while a strong Japanese contingent came from ACC Japan, Junior J Leaguers and Dragon Shooters. For the first time ever, the event involved a mainland China side in the form of Shenzhen United, as well as three all-girls teams, the latter of which enjoyed special dispensation to field players one year older than the boys. The top two teams in each group (U10, U11, U12 and U13) qualified for the Cup quarter-finals, with the driving incentive being to show off their skills in front of a packed HKFC crowd at this weekend’s Adult Soccer Sevens. In the strongest contingent of local professional teams in its history, this weekend’s HKFC Citibank International Soccer Sevens will see four Hong Kong First Division sides - South China, BC Rangers, Citizen and Southern - go in search of glory. The league teams will also be joined by Hong Kong Football Association age-group representative team the Dragons. The Soccer Sevens has been won by just two Hong Kong teams since it was first held in 1999; Instant-Dict defeated Chelsea in 2000, while Kitchee beat Celtic two years ago. The tournament gives the teams an unbeatable chance to compete against top rising stars from overseas, with youth and academy sides from Manchester City, Newcastle United, Aston Villa, Sunderland, Leicester City and Rangers all taking part. “The HKFA is committed to supporting the Soccer Sevens as a high-profile tournament that not only provides a wonderful weekend of entertainment for fans, but also gives local players the chance to test themselves against elite overseas opposition,” said HKFA CEO Mark Sutcliffe. “In this regard, it is fantastic to see some of the most famous clubs in England and Scotland coming to compete, and I am especially pleased that we have five official teams – four First Division clubs plus the HKFA Dragons – entered in the Main draw.” The HKFC Citibank International Soccer Sevens will be held at Hong Kong Football Club from May 24th-26th. A total of 16 teams will play in the Main competition, in which champions Newcastle will be joined by debutants Manchester City, while 12 teams will contest the Masters category. There will also be crowd-pleasing exhibition matches from special needs side HKFC Crusaders and Hong Kong Football Academy’s U14 Girls. All spectators can attend the Soccer Sevens free on Friday May 24th, while all children under the age of 16 will be admitted free of charge throughout the tournament. Tickets for Saturday May 25th and Sunday May 26th cost $160 per day or $300 for a weekend pass.

Tickets can be purchased online at Ticketflap or in person at Hong Kong Football Club or Laxton Events on Lockhart Road. For the ticketing enquiries hotline, call 3579 8088, and for more information about the tournament, please visit the Citibank Soccer Sevens website