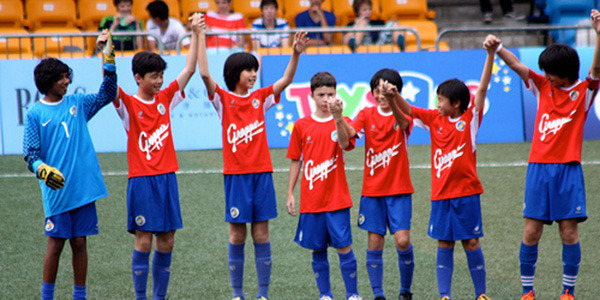 May 27th 2013: Brasil Top Skills Soccer School just missed out in the U13s Plate final Localiiz soccer schools shared the glory with Leicester City at the weekend when competing in front of a packed Soccer Sevens crowd at Hong Kong Football Club. While the Foxes cleared up in a surprise victory in the adults’ tournament, a total of eight finals were also played in Cup and Plate Junior competitions, allowing youngsters across four age groups to showcase their skills among the best in the business. The Asia Pacific Soccer Schools team from Mong Kok proved that everyone’s a winner in football by sharing the U10s Cup with rivals Tai Tam Tigers after the final ended in a 0-0 draw. Caoch Paul Smith said, “All the players enjoyed the Soccer Sevens and it was great for them to play in front of such a large crowd. The U10s' hard-fort contest between Asia Pacific Soccer Schools and Tai Tam ended in a draw, and the coaches of both teams decided that rather than go through with penalties to decide an outright winner, the teams would share the Cup and medals as a sporting gesture for both sides' efforts. Hats off to the organisers for another great event!" Ho Man Tin-based Brasil Top Skills Soccer School just missed out in the U13s Plate final after losing to Kitchee in a dramatic 8-7 penalty shootout. But despite being robbed of the coveted silverware, there were no glum faces among the pint-sized players at Brasil Top Skills Soccer School, according to proud founder Edger Ferreira. “The kids really enjoyed it and we’re, very proud of them,” said Eder. “They got to meet some of their heroes, including Brasil legend Capone, but they are also the heroes themselves. I thought they would be a bit scared playing in front of the big crowd at the stadium, but they surprised me with their confidence and skills. They were stepping over the ball and doing some beautiful things on the pitch!” Speaking about the youngsters’ performance, chairman of HKFC Junior Soccer Chris Plowman added, “Junior soccer has become an integral part of the main Soccer Sevens and it is an unforgettable experience for many of these youngsters to play in front of a large crowd and to rub shoulders with some of the sport’s famous players.” In the adult HKFC Citibank International Soccer Sevens, Leicester City surprised the songful spectators by lifting the Cup for the first time after snatching a win from defending champions Newcastle United. First-half goals from Michael Cain and Harry Panayiotou gave the Foxes a memorable 2-0 victory and brought to an end Newcastle’s 11-game winning streak in the tournament. Leicester won the second-tier Shield on their first visit to Hong Kong in 2012, but this year the Championship club upstaged their Premier League counterparts, including Manchester City and Aston Villa. “We had the experience of playing in last year’s tournament and I think we also benefited from the freshness of the new players we brought this time,” said coach Jon Rudkin. “There are some excellent teams here so we’re delighted to be winning a tournament of this standard.” According to Rudkin, Leicester used the experience of their 2-0 loss to Newcastle in on Saturday to prepare for the final. “We learnt a lot from that first game,” he revealed. “We were aware Newcastle had some excellent players and they’ve been tremendous in this tournament, not just this year but last year as well. But we knew the final was a one-off game so we just had to dig in and give it a go.” Rudkin paid tribute to 18-year-old striker Panayiotou, who scored five goals during the weekend and was named Player of the Tournament. “He’s a strong boy, he’s hard to mark and he’s always going to go and get you goals. He’s done well here, but all the players have stood out with the way they have coped with the heat and competed so well in this tournament environment. I’m delighted with them.” After winning all six of their matches at the Soccer Sevens last year, Newcastle won their first five this time around but had no answer to Leicester’s flying start in the day’s final game. However Magpies’ coach Willie Donachie refused to be downhearted. “The first goal is important in a tournament like this and especially in a final,” he said. “But the players gave everything they had and hopefully they’ll learn from the experience.” Earlier, Leicester knocked out five-time Soccer Sevens winners Aston Villa with a thrilling 4-3 victory in extra time of the quarter-final. Leicester raced into a three-goal lead thanks to Jak McCourt and a Panayiotou double before Villa replied with two goals from Jack Grealish, the second a penalty, and Jerell Sellars. But Leicester bounced back to win it with a golden goal from Cain. Panayiotou was on target again to give the Foxes a 1-0 win over Sunderland in the semi-finals.

In the Masters competition, Rangers All Stars stunned defending champions Aegon Ajax All Stars 2-1 in an entertaining Cup final, with Alex Rae scoring the winner for the Scottish team.