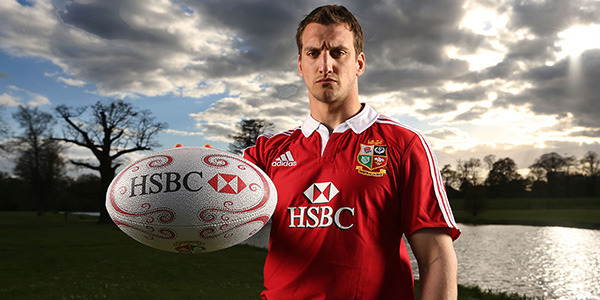 The British & Irish Lions have revealed their squad for their upcoming 125th Anniversary rugby tour to Australia. The 37-strong party was unveiled live on Sky Sports News by Tour Manager Andy Irvine and Head Coach Warren Gatland. The squad for the 10-match, three-Test series, which kicks off against the mighty Barbarians in Hong Kong on June 1st, is made up of 15 Welshmen, 10 Englishmen, nine Irishmen and three Scotsmen and will be captained by Wales’ Sam Warburton. The Cardiff Blues and Wales back row, who becomes the 28th captain of the British & Irish Lions, will lead the 10-match, three-Test Tour. The 24-year-old is only the fourth Welshman to lead a Lions Tour party. Warburton has extensive and impressive captaincy credentials, having led Wales Under-20s at the IRB Junior World Championships and Wales at the 2011 Rugby World Cup and Grand Slam honours in 2012. He has won 38 caps for Wales and will be the first Cardiff Blues player to lead The Lions. Head Coach Warren Gatland said: “In the last 12 months the composition of the touring party and the appointment of the captain has created much speculation and debate, and today it is great that we at last announce our captain and players to represent the very best of British & Irish rugby. Being selected as a Lion is a huge honour for a player and marks a major highlight in his career." “I would particularly like to congratulate Sam who becomes one of the youngest ever Lions captains. We have an existing working relationship through the Wales team and Sam is an impressive individual and natural leader and I look forward to working with him in the coming weeks and on the Tour,” Gatland added. Warburton said: “Being selected as a British & Irish Lions tourist is itself a huge honour and something that I, like all players, have dreamed about. To be asked to lead the Tour as captain to Australia is unbelievable and I am very, very honored to be asked. “It is a proud honour for me, Cardiff Blues and Wales, and to follow in the steps of former Welsh Lions’ captains such as John Dawes and Phil Bennett is amazing. As the latest custodian I will endeavor to do the very best job I can. The Tour to Hong Kong and Australia will be a huge challenge against one of the top three teams in the world. However, I am confident that we have the ambition, talent and attitude to mount a serious challenge against the Wallabies on their home soil and return victorious.” Speaking after the squad announcement, Tour Manager Andy Irvine said: “The announcement of a British & Irish Lions party is always a much anticipated and exciting event. Selection for The Lions is the ultimate accolade and it is a great honour for all the players - they should be congratulated along with their clubs, provinces, regions and unions. We are fortunate to select from the very best of four nations and there will be some quality players who have sadly not made selection and will rightly feel disappointed.” Gatland added: “We spent a long time selecting this squad and there were some close calls with a lot of competition for places. But ultimately we chose the players who will give us the best chance of a Test series victory. A Lions Tour to Australia only comes around once every 12 years and we believe we have the right balance in the squad to be successful. We have a tremendous challenge in front of us but I know the players will be dedicated to the adventure and task ahead.” THE SQUAD Fullbacks: Leigh Halfpenny (Wales, Cardiff Blues), Stuart Hogg (Scotland, Glasgow Warriors), Rob Kearney (Ireland, Leinster) Wings: Tommy Bowe (Ireland, Ulster), Alex Cuthbert (Wales, Cardiff Blues), Sean Maitland (Scotland, Glasgow Warriors), George North (Wales, Scarlets) Centres: Jonathan Davies (Wales, Scarlets), Brian O'Driscoll (Ireland, Leinster), Jamie Roberts (Wales, Cardiff Blues), Manusamoa Tuilagi (England, Leicester Tigers)