Leung Goes on the Defence 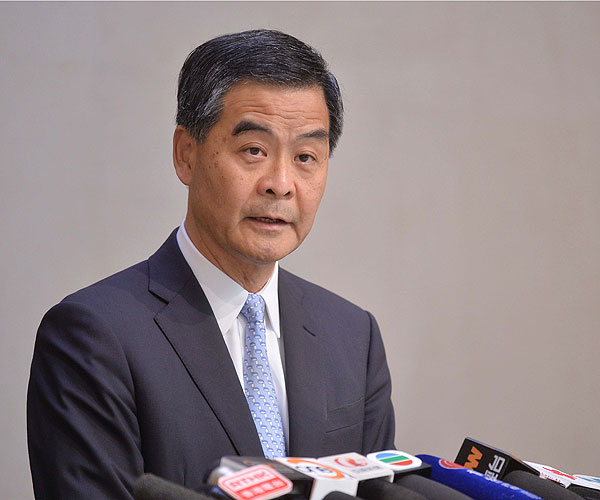 Ahead of tonight’s meeting between government officials and students, Hong Kong’s Chief Executive spent the day clarifying and defending comments he made recently that caused a backlash in the media. Speaking with the New York Times, among a small group of international media at his residence last night, CY Leung said that Hong Kong’s Basic Law dictates a nomination committee that broadly represents the community. “You have to take care of all the sectors in Hong Kong as much as you can,” Leung said, “and if it’s entirely a numbers game and numeric representation, then obviously you would be talking to half the people in Hong Kong who earn less than $1,800 a month. Then you would end up with that kind of politics and policies.” The comment went viral on social media today among journalists and residents who voiced outrage over Leung’s belief that the level of poverty in Hong Kong should prevent democracy. Others took issue with the idea that Hong Kong’s poor and working class would only focus on issues they face should they win representation as the next Chief Executive. Hong Kong’s Information Services Department later posted a clarification to Leung’s comments saying the Chief Executive was simply reiterating the Basic Law’s requirement that the nomination committee for the Chief Executive election in 2017 equally representative of the various social groups that make up Hong Kong’s community. Leung cited sports and religious sectors as examples of small populations that would be underrepresented in a one person, one vote society. Leung also defended a comment a he made on television Sunday when he stated that external forces are influencing the Occupy Central movement. The Chief Executive says he was not speculating when he made the statement and told reporters before attending an Executive Council meeting today that evidence supporting his claim may be shared with the at an appropriate time. Leung went on to say that tonight’s talk between Government officials and students may be a positive beginning to further discussions on constitutional reform adding that a single dialogue will certainly not resolve any overriding issues. Representing the government at the talk will be Chief Secretary Carrie Lam, Secretary for Justice Rimsky Yuen, Secretary for Constitutional & Mainland Affairs Raymond Tam, the Chief Executive's Office Director Edward Yau, and Under Secretary for Constitutional & Mainland Affairs Lau Kong-wah. Representing the Hong Kong Federation of Students will be Secretary-General Alex Chow, Deputy Secretary-General Lester Shum, General Secretary Eason Chung, and Council Members Nathan Law and Yvonne Leung. The meeting will take place at the Hong Kong Academy of Medicine Jockey Club Building and be moderated by Lingnan University President, Professor Leonard Cheng. Got anything you'd like Localiiz to share? Send us your stuff!
[button color="blue" size="medium" link="https://localiiz.us4.list-manage.com/subscribe/post?u=c2964a434922598f5d8ee53ff&id=07d327a2e8" icon="" target="true"]Subscribe to receive our weekly newsletter[/button]

Win tickets to see The Snowman!