Kenny G to China: "I Am Not Supporting the Demonstrators"

Best-selling U.S. musician Kenny G clarified his position on the Occupy Central movement via social media earlier today after a tweet he posted yesterday earned him a reprimand from China’s foreign ministry. The saxophonist, real name Kenneth Gorelick, took to Twitter and Facebook to explain his visit to the Umbrella Square area of Admiralty after several photos of his outing appeared online. In a daily media briefing yesterday, China’s foreign ministry spokeswoman Hua Chunying addressed Gorelick’s original tweet, advising foreigners to tread cautiously when discussing Occupy Central and not to support a movement deemed illegal by China. “I was not trying to defy government orders with my last post. I was in Hong Kong as a stop on my way to perform at Mission Hills and happened to walk by the protest area as I was walking around Hong Kong as a tourist,” Gorelick tweeted. Gorelick goes on to explain that fans took his picture during his walk around the site and assumptions that he supports the Occupy Central movement are wrong. “It’s unfair that I am being used by anyone to say that I am showing support for the demonstrators. I am not supporting the demonstrators as I don’t really know anything about the situation and my impromptu visit to the site was just part of an innocent walk around Hong Kong,” he added. The Grammy winner’s music is popular throughout China, with one song in particular, “Going Home”, widely used at retail outlets to announce the end of the day. “I love Hong Kong and always come here to perform when I’m asked to,” Gorelick said. “I love China and love coming here to perform for over 25 years. I only wanted to share my wish for Peace for Hong Kong and for all of China as I feel close to and care about China very much.” “Please don’t mistake my peace sign for any other sign than a sign for Peace,” Gorelick said, referring to a photo of Gorelick posted online with a demonstrator. 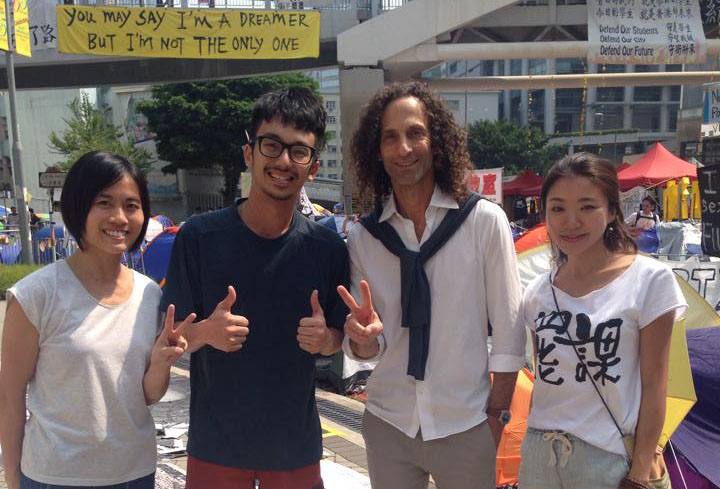 Gorelick's latest comments are fueling criticism among Occupy Central supporters who see his social media posts as backpeddling. In several humorous posts on Twitter, including the 2011 Audi advertisement below, Gorelick's soothing music is cited in contrast to his seeming agitation with being aligned with the demonstrators. Got anything you'd like Localiiz to share? Send us your stuff!
[button color="blue" size="medium" link="https://localiiz.us4.list-manage.com/subscribe/post?u=c2964a434922598f5d8ee53ff&id=07d327a2e8" icon="" target="true"]Subscribe to receive our weekly newsletter[/button]